+1 point
Thank you for your contribution! You can also upload a video entry related to this topic through the link below: https://encyclopedia.pub/user/video_add?id=20830
Check Note
2000/2000
Poultry Parasitic Diseases

Parasitic infections are a major public health concern affecting millions of people universally. The medicinal importance of natural herbs depends upon their bioactive ingredients, which are originated from crude plants, consequently leading to the specific action on the body. Due to the limited availability of effective drugs and high cost, the development of drug resistance in several harmful parasites and microbes leads to huge economic losses in the poultry industry.

Protozoa and helminths cause the majority of parasitic infections and cause high mortalities. The reduction in the use of chemically manufactured drugs can be attributed to poverty, inaccessibility, and decaying infrastructure. The use of alternative medicine, as a result, has led to concern [1]. Several diseases can be cured using traditional medicines that utilize plant, herb, or mineral ingredients [2]. The decline in neglected tropical diseases among the regions has largely been attributed to traditional medicines [1]. The efficacy of traditional medicines in the prevention of a few diseases may differ due to their acquired plant material or herbs being from diverse geographic areas with varying climatic conditions, therefore varying in their therapeutic properties; biodiversity and cultural practices have a huge impact on medicinal plants and herbs that are used for the cure of specific parasitic infections [2].
For several years, antiparasitic agents have been used to treat both external and internal parasitic infections. As a result of the construction of resistance against industrial products, gastrointestinal parasites and ectoparasites (Figure 1) have been searched for alternate control strategies; anticoccidial, anthelmintic, and acaricidal plants used in ethnoveterinary practices are increasingly popular everywhere. The suitability of medicinal plants as an alternative depends mainly on their scientific confirmation [3]. 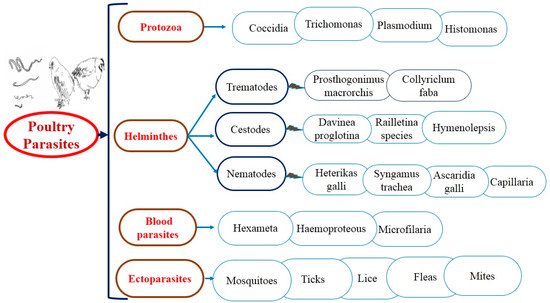 Figure 1. The general layout of parasitic diseases in poultry.
In addition to their direct anticoccidial effects, numerous plants and bioactive components obtained from these plants exhibit immunomodulatory, antioxidant, and growth-promoting properties, enhancing their potential as poultry alternative remedies to commercial anticoccidials (Table 1) [3]. Historically, the plant kingdom has provided effective drugs since ancient times. Plant-based medications seem to be used by a large percentage of the world’s population for health care requirements, both for themselves and their animals. In animals, these medications are used to treat a wide variety of infections. Furthermore, the majority of modern preparations are either natural or semi-synthetic or synthetic equivalents of natural products [4].
Table 1. Antiparasitic medicinal plants with their bioactive components and applications.
Against trichomoniasis (Canker, Frounce) of pigeons, herbal antiprotozoal drugs have been assessed, and Thankuni (Centella asiatica) exposed the greater efficiency in vitro and in vivo conditions. Recently, plant products are commercially available and can be used as anticoccidial feed additives in poultry with Cocci-Guard (DPI Global, USA), a mixture of Terminalia chebula, Quercus infectoria, Rhus Chinese, and BP preparation comprises of Bidens pilosa and other herbal plants. Moreover, exploration of components or their byproducts that exist in anticoccidial herbal plants may motivate the investigation and improvement of anticoccidial chemicals. For example, halofuginone is synthetically derived from febrifugine that was primarily recognized from Dichora febrifuga (antimalarial plant Chang shan) [20][21].
Due to resistance and sustainability concerns, synthetic chemicals and antiparasitic drugs, which were popular as a result of industrialization and a “quick fix” culture, have lost most of their value. Scientists across the world are focusing on natural plant extracts for systematic and scientific estimation due to a resurgence of concern in ethnobotany. The phytochemical analysis of medicinal plants indicates their bioactive components which are utilized in traditional medicine [22].
Plant preparations typically contain extracts from a variety of parts of the plant, such as fruit, seeds, leaves, bark, stems, and roots. Among the plant’s bioactive components are alkaloids, tannins, terpenoids, saponins, and flavonoids. Avian coccidiosis, specifically, is responsible for massive economic losses in the poultry industry. Commercial coccidiostats were a good practice until some animal products developed resistance to them and their residues were detrimental. Consequently, the exploration of sustainable alternatives has resulted in the assessment of botanicals for probiotics, anticoccidial, and immunomodulatory effects universally. Application of flaxseed whole or oil to starter rations from day 1 of age showed a decrease in lesions associated with infection with Eimeria tenella. Some Indian plants have demonstrated antiprotozoal activities, such as Holorrhena antidysentrica (Kurchi) and Allium spp., as well as Berberis spp., and are included in proprietory anticoccidial preparations. Efficiency for a few of these, such as AV/CPP/12 and IHP-250 (Zycox), as per standard protocol in poultry floor pen trials, has been demanded [23][24][25][26]. A herbal anticoccidial preparation containing Eimeria ribes seed and H. antidysentrica with or without soda bicarb (to enhance the pH of intestinal contents) was tested in experimentally infected broilers [27]. Through in vitro study, it has been exposed that allicin (a component of fresh garlic) constrains the sporulation of E. tenella efficiently [28][29][30][31][32]. Camellia sinensis (Green tea) extract has been exposed to predominantly prevent the sporulation of coccidial oocysts. Consequently, in green tea, selenium and polyphenolic components are supposed to be active components to deactivate the enzymes liable for coccidian sporulation [31][32]. It has been reported that Carica papaya (papaw) leaves markedly obstruct coccidial oocysts [33][34]. In another study, it has also been stated that Malvaviscus arboreus (Turkscap), Morinda citrifolia (Beach mulberry, Cheese fruit), and Mesembryanthemum cordifolia (Rock rose, Red aptenia) exhibited anticoccidial effects in poultry [35]. Saponins were assumed to be an effective component that might lyse the oocysts. Maslinic acid, an active ingredient in the fruit and leaves of the Olea europea (olive tree) has been recognized as a novel anticoccidial component [10].

There is evidence that helminthiasis plays a significant role in reducing rural poultry production. Wherever birds live, whether in huge commercial systems or in rural backyard farms, parasites cause problems and lead to increased economic losses. A free-range scavenging system raises native poultry in backyard poultry farming, which poses a relatively high risk of parasitic infections, such as gastrointestinal helminths [36]. Due to the rise in anthelmintic resistance, inadequate accessibility, and the high price of commercial anthelmintics, there is a growing concern for screening the anthelmintic properties of traditionally used herbal medicines in ethnoveterinary practices [37][38]. Initiating the search for alternative approaches to control helminths using novel ingredients from plants [39]. Generally known as the fennel flower plant, Nigella sativa (Linn.) is a native herbaceous plant of the Ranunculaceae family [40]. Many chemical components and active components of Nigella sativa seeds have been identified, such as thymoquinone, nigellone, and essential oils [41]. A few previous studies have demonstrated the anthelmintic efficiency of N. sativa [42].
The use of herbal medicines for the treatment and control of gastrointestinal parasites has its roots in ethnoveterinary medicine. The use of herbal medicines against parasitism has been around for a long time, and such medicinal plants are still used around the world to treat parasites [43]. There is a wide range of medicinal plants and their extracts that can be used in ethnoveterinary medicine that is motivated by traditional practices for the treatment of almost any parasitic infection in livestock and poultry. It has been applied that seeds such as onion, garlic, and mint are used to treat animals and birds suffering from parasitic gastrointestinal infections. Besides the leaves and flowers, the oil of Chenopodium ambrosioides is also used as an anthelmintic. This shrub originated in Central America and has spread throughout the world [44].
There is an extensive list of plants from around the world that have been recognized as having medicinal properties [45][46][47]. Such as herbal plants having anthelmintic action in vitro against Ascaridia galli comprises of Anacardium occidentale (Cashew nut), Allium sativa (garlic), Tribulus terrestris (Gokhru), Bassia latifolia (Butter tree, Mahua), Piper betle (Betle Pepper), Morinda citrifolia (Indian Mulberry), Cassia occidentalis (Negro-coffee), and Aloe secundiflora (Aloe vera). However, in vivo studies against Ascaridia galli comprises, the usage of Psorelia corylifolia (babchi), Piper betle (Betle Pepper), Pilostigma thonningi (monkey biscuit tree), Caesalpinia crista (Squirrel’s Claws), Ocimum gratissimum (basil-clove), and Anacardium occidentale (Cashew nut) [48]. Herbal plants seem to have great anthelmintic actions in birds and may be a substitute for commercially used synthetic drugs, and their usage may restrain drug resistance in endemic pathogen populations and drug residues in chicken meat.
The Azadirachta indica tree (neem) is known for its medicinal properties and has been used for treating gastrointestinal nematodes and other infections in several parts of the world [49][50]. Furthermore, there has been evidence of the high anthelmintic efficiency of N. sativa extract against helminth species found in poultry (Aseel chicken). It has also been identified the high anthelmintic efficiency of N. sativa extract against helminth species that infect the poultry (Aseel chicken). Among the bioactive components found in N. sativa seeds and oils, thymoquinone has been observed as an important phytochemical anthelmintic. Furthermore, the anthelmintic action of N. sativa may also be attributed to its other bioactive components, which improve nutritional status and host immunity.
Similarly, studies have shown that the consumption of condensed tannins by adult worms damages the intestinal mucosa at various levels and causes harm to parasites. The use of thymoquinone in helminths leads to surface tegumental destruction [51]. An efficient and cost-effective cure of helminth infections that cause significant production losses in backyard poultry and an enhanced anthelmintic resistance worldwide is required [52][53][54]. The synergetic effects of advanced and safer antihelmintic drugs as well as herbal medicines possessing broad anthelmintic properties are of high importance.

A number of parasitic insects and acarine species are externally infesting birds worldwide [55]. These parasites are known as ectoparasites. An ectoparasite is an organism that lives on the outer surface of its host and causes harm to it. The word “ektoparasite” is taken from the Greek word “ektos”, which means outside and “parasitos”, which means parasite [56]. These Ectoparasites include fleas, ticks, mites, mites, fleas, mosquitoes, blowflies, and blackflies. As a result, people and poultry suffer severe socioeconomic losses and illnesses, which are often caused by pathogens such as bacteria, fungi, viruses, nematodes, rickettsiae, spirochetes, and protozoa, all of which can cause highly dangerous zoonotic infections. Ticks are the most significant disease-causing arthropod vector, all other hematophagous arthropods can transmit a wide range of infections to humans and animals, including poultry, such as spirochetosis. Due to their extended feeding period, ticks represent an extreme example of evading their host’s immune response and hemostatic defense, thus becoming the best pathogen spreaders among all known arthropods. In ticks, digestive enzymes are deficient which may explain why ticks spread more pathogens than other hematophagous arthropods [57].
Many ingredients derived from plants that are used for tick prevention have been thoroughly studied. Only a few essential oils can have neurotoxic effects, such as inhibiting acetylcholinesterase (AChE), blocking receptors of octopamine, or closing chloride channels through gamma-aminobutyric acid (GABA) [58]. Veterinary ethnomedicine, which is motivated by traditional practices, can be used to treat almost any parasitic infection in livestock and poultry with a wide range of medicinal plants and their extracts.

More
© Text is available under the terms and conditions of the Creative Commons Attribution (CC BY) license; additional terms may apply. By using this site, you agree to the Terms and Conditions and Privacy Policy.
Upload a video for this entry
Information
Subjects: Agriculture, Dairy & Animal Science
Contributor MDPI registered users' name will be linked to their SciProfiles pages. To register with us, please refer to https://encyclopedia.pub/register :
Muhammad Tahir Aleem
View Times: 366
Revisions: 2 times (View History)
Update Date: 19 Apr 2022
Table of Contents
1000/1000
Hot Most Recent