+1 point
Thank you for your contribution! You can also upload a video entry related to this topic through the link below: https://encyclopedia.pub/user/video_add?id=20685
Check Note
2000/2000
3D Printed and Conventional Membranes

Additive manufacturing, also called 3D printing (3DP), is considered to be a possible approach to produce custom membranes with more manufacturing control than any other method of membrane manufacturing available today. Polymer membranes are central to the proper operation of several processes used in a wide range of applications. The production of these membranes relies on processes such as phase inversion, stretching, track etching, sintering, or electrospinning. Results show that very few membrane materials are used as 3D-printed membranes. Such membranes showed acceptable performance, better structures, and less environmental impact compared with those of conventional membranes.

Membrane technology, particularly polymer membranes, has multiple applications, including water treatment, electrodialysis, in batteries, and in the food and pharmaceutical industries [1][2][3]. A polymer membrane is a physical barrier separating two environments, endowed with selective permeability to certain species. In all applications, it is desirable that membranes possess high selectivity and stability, and low cost. Membrane choice depends on application type. Membranes can be of the following types: microporous, asymmetric composite thin-film, dense, or ion-exchange [1][4][5]. A microporous membrane is very similar in function to a conventional filter, where it rejects large particles (greater than 10 µm) while allowing for the smallest particles to pass [4]. For a dense membrane, permeants are transported by diffusion under the driving force of pressure, concentration, or electric potential gradient. A thin-film composite asymmetric membrane (TFC) is a microporous membrane featuring a dense thin selective layer. Ion exchange membranes can be either dense or microporous, and carry positively or negatively charged fixed ions in their polymer matrix. Their operating principle is based on the exclusion of ions of the same charge as the fixed ions of the membrane structure and the passage of ions of opposite charge.
Polymer membranes are produced using one of several approaches. Common approaches include phase inversion, stretching, track etching, sintering, electrospinning, and surface coatings of a support [1][4]. Manufacturing methods play an important role in membrane technology and its applications. Not only can membrane performance be significantly affected, but also their cost. Commercial activities and urgent needs have led to a rapid increase in membrane R&D to optimize performance, cost, and durability. Although conventional methods offer efficient membranes, the precise control of preparation parameters remains problematic. To overcome these challenges, some researchers have been adopting the additive manufacturing (AM) of membranes. AM is also called 3D printing (3DP).

Conventional manufacturing methods are based on phase-inversion techniques, stretching, track etching, sintering, electrospinning, and layer by layer. Phase inversion, being a simple and fast method, is the most widely used for manufacturing membranes in which different kinds of polymers can be used for different applications. In such an approach, a polymer is first dissolved in a solvent to form a more or less viscous solution. This solution is then spread onto a glass plate and solidified [6][7]. This solidification can occur either through thermally or nonsolvent-induced phase separation.
Another approach to produce porous membranes is by stretching dense extruded films [4][8]. Stretching a dense film perpendicularly to its extrusion direction creates small breaks that result in pore formation. The stretching technique is generally used to prepare microfiltration (MF), ultrafiltration (UF), and membrane-distillation (MD) membranes, and is preferred for highly crystalline polymers [9].
Track etching is also a technique to fabricate porous membranes for various applications including filtration and cell culture [10]. Track etching instead relies on the irradiation of the dense film perpendicularly to the surface [4][10]. The radiation-damaged material is then removed by postprocessing to create straight cylindrical pores. It is an expensive technique due to the use of high-energy radiation [11]. The most commonly used materials for track etched membranes are polyethylene naphthalate (PET), polypropylene (PP), and polycarbonate (PC) [9].
Membranes can also be produced by sintering powders of polymeric materials. Compressing and heating particles slightly below their melting temperature induce bonding [6][11], with spaces between the sintered particles becoming pores. Sintering is mainly used for the preparation of microfiltration membranes. The used polymers must have excellent resistance to chemicals and high temperatures [11].
Membranes are also produced from polymer nanofibers obtained through electrospinning. Polymers such as polyvinylidene fluoride (PVDF), polyacrylonitrile (PAN), or polystyrene (PS) are electrospinable.

Additive manufacturing is a layer-by-layer manufacturing process capable of easily building complex, real custom objects. Various 3D printing techniques are available such as stereolithography, digital light processing (DLP), fused deposition modeling (FDM), multijet printing (MJP), and selective laser sintering (SLS) [12][13]. All these processes work on the same basic concept to produce the final object. The whole process begins with a computer-aided design (CAD) model, which is then converted into the stereolithography format (STL). The obtained 3D file is then preprocessed by specific software, where process parameters such as 3D part orientation into the build volume and slicing parameters are defined. The information is then sent to the 3D printer that carries out layer-by-layer manufacturing.
Stereolithography (SLA) consists of solidifying a photosensitive liquid resin layer by layer using an ultraviolet (UV) laser beam [13][14].

3. Comparison of Conventional and 3DP Membranes

For material comparison, only the base polymer of the membrane is considered, as production of 3D membranes is usually carried out in the form of a composite membrane, i.e., 3D printing is used to manufacture the support, while other techniques are used to produce a selective layer. Materials are listed on the basis of reviews of conventional membranes [1][15][16][17][18][19], 3DP polymers [12][13][14][20], and reviewed articles on 3DP membranes.
Some 3D membrane materials are directly produced using common 3D printing technologies. FDM facilitates directly obtaining membranes from poro-lay [21][22], polylactic acid (PLA) [23], polylactide-co-glycolide (PLGA) [24], and polyethylene terephthalate (PET) [25]. The SLS technique is used to print polyamide 12 [26][27] and polysulfone [28] membranes, while SLA is used for diurethane dimethacrylate-co-polyethylene glycol diacrylate (DUDA-co-PEGDA) [29] and tangoplus [30] membranes. MJP can produce acrylonitrile butadiene styrene membranes (ABS-Like) [31][32]. Approaches based on solution casting printing allow for the direct production of PDMS [33], poly (vinyl alcohol) (PVA), polybenzimidazole (PBI) [34] and polyvinylidene fluoride (PVDF) [35] membranes. TFC membranes are also fabricated using 3D technology [36].
Figure 1 illustrates the materials used in conventional and 3DP membranes. 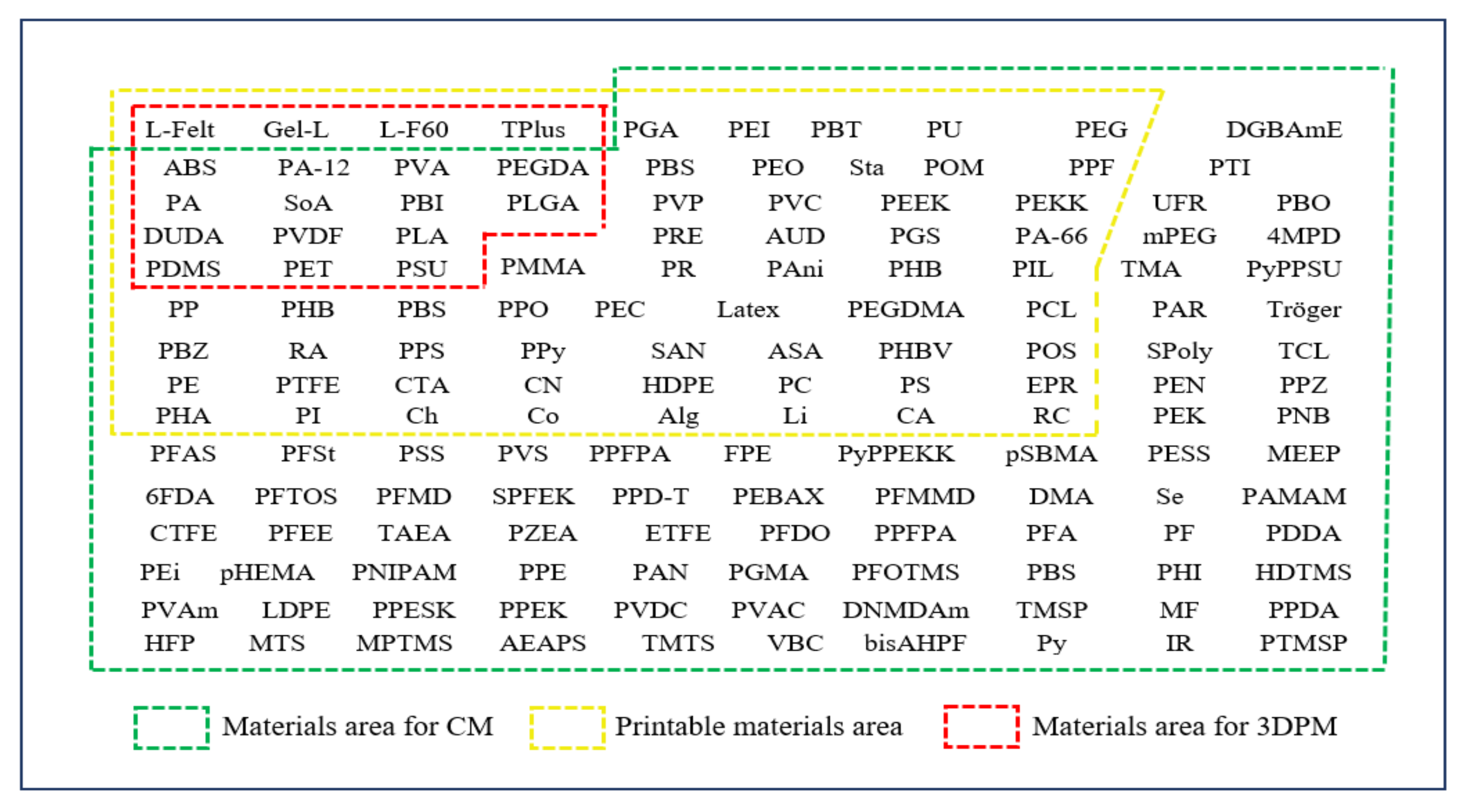 According to the nature of fused filament fabrication (FFF) process, each deposition has its own strong influence on different aspects of the constructed parts. This issue clearly means that the final parts’ thermal, mechanical, and rheological characteristics are affected by different deposition mechanisms. There are various mechanisms of deposition based on the filling of layers, namely, counter fill, raster fill, counter, and raster fill.
Most 3DP technologies do not produce membranes with the flexibility of traditional methods. However, the configuration of membranes using traditional methods is limited to simple structures (e.g., flat). This limitation can benefit the increased use of 3DP techniques where almost any complex geometric shape can be designed and produced.

Some of the major properties of 3D-printed membranes are given in Table 1. Thickness is a key factor in determining membrane performance. A thicker membrane generally exhibits lower permeability but higher surface resistance, thus affecting performance. The thickness of conventional membranes can reach values of 150–250 µm (for separation: e.g., water–oil), and 150 µm (for RO) [37]. The thickness of 3DP membranes is more significant, with values of 800 µm (for water–oil separation) [33] or 500 µm (water–oil separation) [31].
Table 1. Properties of 3D-printed membranes compared with conventional membranes.

Manufacturing methods affect not only membrane performance, but also the production costs. In the current circumstances, it is challenging to compare production costs of conventional and 3DP membranes, mainly due to the lack of price information in the case of 3DP membranes. Some studies nevertheless confirmed that their 3DP membrane is less expensive than conventional membranes. In the case of 3DP membranes, manufacturing costs include 3D printer purchase costs (investment) and used printing materials (consumables, operating). According to Low et al. [5][42], 3D printers are more expensive than most conventional manufacturing techniques such as solution casting, layer-by-layer (LBL), and phase inversion. This is reversed in the case of the material used during 3D printing, as Philamore et al. [30] reported significantly lower raw material costs to produce a 20 cm2 Tangoplus 3DP membrane compared to the equivalent area of conventional material.

Results showed differences between 3DP and conventional membranes in terms of materials, properties, performance cost, and environmental impact. It is shown that common materials for membranes are not well-adapted to additive manufacturing. This can be observed by the low number of suitable printing materials in comparison with conventional membrane materials, explainable by the inability of 3D printing technologies to use a wide range of materials. The 3DP membranes exhibited, however, a much better structure than that of conventional membranes. It can be attributed to the possibility of printing complex shapes in a controlled manner, whereas parameters are not measured or precisely controlled in conventional processes. The 3D membranes were shown to exhibit properties and performance approaching conventional membranes, and 3D printing has shown its ability of creating nature-resembling structures to improve performance. Another benefit of 3D printing is the ease in customizing membrane design to satisfy customer needs within a short turnaround time. The advantages associated with additive manufacturing could thus revolutionize the manufacture of low-cost high-performance membranes.
To achieve this, key areas must be further developed, including improvement in XY resolution and development of printers able to process a wide range of materials. The introduction of hybrid materials could be advantageous for the properties of 3DP membranes. An issue to address is the long-term stability and performance of 3D membranes, something not fully known due to the limited number of research groups working on 3D membranes. Further investigations are thus needed to demonstrate their suitability in membrane applications. Another essential area of 3DP research is the creation of a unique printing system incorporating both membrane and other components. Such development would greatly benefit membrane production. Another research direction with exciting possibilities is 4D printing, where the element of time is added to 3D printing. This enables changes in properties, function, or shape to a 3D-printed part with time [42]. Such 4D approaches could enable the production of more efficient membranes. All these eventualities, combined with larger 3D printers having very high printing speeds, can increase the potential for industrial use. Environmental considerations, including fees associated to proper waste disposal, can encourage traditional membrane manufacturing to switch to 3D printing to reduce the amount of produced waste.

More
© Text is available under the terms and conditions of the Creative Commons Attribution (CC BY) license; additional terms may apply. By using this site, you agree to the Terms and Conditions and Privacy Policy.
Upload a video for this entry
Information
Subjects: Engineering, Manufacturing
Contributor MDPI registered users' name will be linked to their SciProfiles pages. To register with us, please refer to https://encyclopedia.pub/register :
Hamid Reza Vanaei
View Times: 320
Revisions: 2 times (View History)
Update Time: 18 Mar 2022
Table of Contents
1000/1000
Hot Most Recent