Submitted Successfully!
Thank you for your contribution! You can also upload a video entry related to this topic through the link below:
https://encyclopedia.pub/user/video_add?id=20647
Check Note
2000/2000
Carbon Capture Utilization and Storage in Korea
Edit

In 2008, the Republic of Korea announced the Low Carbon Green Growth vision as the national growth engine. This Green Growth vision invested in developing state-of-the-art green technologies to minimize greenhouse gas and pollutant emissions. Following a change in administration, Korean green technologies were re-categorized into six core technologies for climate change response in 2014, and ten core technologies for carbon-neutrality in 2021. The government proposed the realization of an inclusive green state in the 3rd Five-Year Green Growth Plan announced in 2019. Following the Green New Deal announced in 2020, green technology policies and investments continue, with the declaration of 2050 carbon neutrality. In the past two years, government policies from the 2050 Carbon Neutrality Strategy to the 2050 Carbon-Neutral Scenario consider Carbon Capture Utilization and Storage (CCUS) as an important technology to reduce CO2 and meet carbon-neutral goals.

Between 2008–2012, Low Carbon Green Growth (Low Carbon Green Growth, originally a vision, was the flagship policy during the Lee Myung-Bak administration) was the great engine powering the Republic of Korea. Guided by the National Strategy for Green Growth, infrastructure projects and investments were made in green technologies specializing in greenhouse gas emissions and pollution reductions. The president of Korea has a five-year term. Each regime presents a national policy management stance. From 2008 to 2012, green growth was the basis of national policy, and it was an important period that became the basis of the current carbon neutrality period. In the following two administrations, Korea’s green technologies were reshuffled, first in 2014, into six core climate change response technologies, and again in 2021, into ten core carbon-neutral technologies. National-level investments in green technologies continued over the years, through the 3rd 5-year Green Growth Plan (2019)—which proposes a roadmap for constructing a Socially-inclusive Green Nation, and through to the 2020 Green New Deal and the 2050 Carbon Neutral policy [1][2][3][4][5][6][7].
In September 2021, maintaining the effort to meet the carbon-neutral goal, the Korean government enacted the Framework Act on Carbon Neutrality and Green Growth, scheduled to come into effect in 2022.

“The Basic Act on Carbon Neutralization aims to prevent severe effects of the climate crisis, by strengthening measures to reduce greenhouse gases and climate crisis adaptation, by resolving economic, environmental, and social inequalities that may occur in the process of transitioning to a carbon-neutral society, by developing, promoting, and vitalizing green technologies and green industries, improving the quality of life of the current and future generations, and protecting the ecosystem and climate system, and contributing to the sustainable development of the international community [7][8][9].”

Even in different administrations, green technologies remain within each administration’s R&D technology policy and law. Carbon Capture Utilization and Storage (CCUS) technology is acknowledged as an essential carbon emission reduction technology by international organizations such as IEA, IPCC, and national policies like the 2050 Carbon-Neutral Scenario. The CCUS technology covered includes Carbon Capture and Storage (CCS) technology, which captures and stores carbon through dry scrubbing, wet scrubbing, and separation membrane and Carbon Capture Utilization (CCU) technology, transforming carbon into highly valued material.
The National Energy Technology Laboratory (NETL) under the U.S. Department of Energy (DOE) pioneered CCUS research, expanding from the traditional CCS to CCU [10].
CCUS technology for carbon reduction is being proposed in long-term low greenhouse gas emission development strategies (LEDS) of major countries.
It mainly suggested the use of technology in the energy and industrial sectors such as electricity and hydrogen. Germany mentioned CCUS technology as a strategy for the industrial sector. In the United States, CCUS technology was proposed as a major technical means of reducing carbon in the electricity sector. Japan proposed CCUS technology in the energy and industry sectors. The UK proposed the use of CCUS technology in the development of biomass and scenarios in which the hydrogen economy was activated [11].
In 2009, the Korean government included CCS in the twenty-seven green technologies for sustainable economic growth. In 2012, 127 experts for engineering or technology management assessed the economic and environmental feasibility of the twenty-seven technologies. Thirty-two of them assessed CCS as a technology that can balance economic development and environmental protection [2][4].
Recently in 2020, the Korean government proposed various policies relating to carbon neutrality, including the 2050 Carbon Neutrality Strategy, the 2021 Carbon Neutrality Implementation Plan, and the Carbon Capture and Utilization (CCU) Technology Innovation Roadmap. CCUS is evaluated as an important technology that can reduce CO2 emissions. The 2050 Carbon-Neutral Scenario published in October 2021 shows two proposals targeting a carbon emission of 0. CCUS is set as the main absorption and removal method, along with forests and Direct Air Capture (DAC). In the carbon-neutral scenario, CCUS is suggested as the most important absorption and removal method with a maximum processing capacity of 85.2 million tons of CO2-eq. Based on the National Greenhouse Gas Reduction Goals (NDC) announced in 2018, there was no carbon throughput using CCUS; but for 2050, the reduction amount of Plan A is calculated at 55.1 million tons CO2-eq, while the reduction amount of Plan B was at 84.6 million tons CO2-eq. If plan A is implemented, thermal power generation will be completely stopped, and if plan B is implemented, CCUS will be used and thermal power generation will be continued. Plan B has a 29.5 million ton CO2-eq more reduction target using CCUS than Plan A and is highly dependent on technology [5][6][12][13][14][15][16].

In 2014, MSIT, preceding the Ministry of Science and ICT, announced six core technologies in three major fields through the Climate Change Response Core Technology Development Strategy: solar cell, fuel cell, and bio cell technologies were categorized under fossil fuel replacement; secondary battery and power IT (EMS) under greenhouse gas emission reduction; and CCS technology under greenhouse gas treatment. In 2012, the ministry announced the increase of R&D investment from 2.2 trillion KRW in climate change response technology and 0.77 trillion KRW in six core technologies by more than 50% each by 2020 [4].
Greenhouse gas emissions reduction efforts from government ministries such as MSIT, MOTIE (Ministry of Trade, Industry, and Energy), MOF (Ministry of Oceans and Fisheries), and ME (Ministry of Environment), have been reflected in their investment plans for CCS. In the Climate Change Response Technology Development Project, for instance, MSIT supported securing leading source technologies with large greenhouse gas reduction potentials to cope with the climate crisis. In June 2011, the Korea CCS 2020 Basic Plan was published and the Korea Carbon Capture and Sequestration R&D Center (KCRC) was established in the same year to promote the 172.7 billion KRW national project in the period between 2011 and 2019. MOTIE strategized the Greenhouse Gas Treatment Technology Development Project centered on large-scale CCS demonstration and commercialization projects worth 93.5 billion KRW. MOF planned the 90 billion KRW CO2 Marine Treatment Technology Development Project, while the ME planned the 20 billion KRW CO2 Storage Environment Management Technology Development Project. Finally, the Korea CO2 Storage Environmental Management Research Center (K-COSEM) was formed in 2014 as part of a multi-ministry effort by the ME, MSIT, MOTIE, and MOF [4].
In 2016, Korea designated CCU as one of the nine major national strategic projects during the Second Science and Technology Strategy Meeting. Starting from this, the notion of CCS—mainly concerned with reducing and treating existing greenhouse gases—was expanded to CCUS, including the concept of CCU. In terms of policy, the National Strategic Project Demonstration Roadmap for Carbon Resourceization was announced in 2016; in 2017, a national strategic research center worth 49.5 billion KRW was established with the combined effort from MOLI, MOTIE, and the European Union (EU) [10].
In late 2018, the EU announced its carbon neutrality goal by 2050 through the mammoth Green Deal. By the end of 2020, 128 countries declared carbon neutrality targets. In July 2020, Korea announced its effort towards reaching carbon neutrality and constructing the circular economy through the Green New Deal, a subset of the Korean New Deal. The carbon neutrality target became official in October 2020 at the National Assembly.
Until recently, the government announced the 2050 Carbon-Neutral Promotion Strategy, which contains the 2021 Carbon Neutral Implementation Plan, CCU Technology Innovation Roadmap, and the 2050 Carbon-Neutral Scenario as detailed plans to meet the carbon neutrality goal [6][12][13][14][15][16].
The CCU Technology Innovation Roadmap indicates milestones up to 2050 of the fifty-nine detailed technologies in the five major technology areas, including CO2 capture, chemical conversion, biological conversion, mineral carbonization, and other forms of carbon utilization. This is meaningful as it presents milestones and KPIs for each detailed key technology and the need to commercialize CCUS technology to realize carbon neutrality.
Policy-wise, Korea’s CCUS technology expanded from CCS to CCUS—the latter including CCU. CCS was first proposed as one of the twenty-seven green technologies during the 2009 Green Growth era, and one of the six core technologies in responding to climate change in the 2014 Creative Economy era. In 2021, through the Carbon Neutral Technology Innovation Promotion Strategy, it is considered one of the ten core technologies—waiting for commercialization—supporting the industry’s transition to low-carbon.

Figure 1 illustrates R&D investment in CCUS over the past ten years (2011 to 2020) based on the CCU Technology Innovation Roadmap data. It is classified into three categories: capture, utilization, and transportation and storage. Over the past ten years, R&D investment in CCUS generally decreased to about 469,243 million KRW, parallelling similar decreases in investments in capture and transportation. The sharp decline in budget for transportation storage since 2017 is attributed to the earthquake near Yeongil Bay in Pohang and safety reviews. Expert reviews indicate that the possibility of an earthquake in Yeongil Bay is very low. 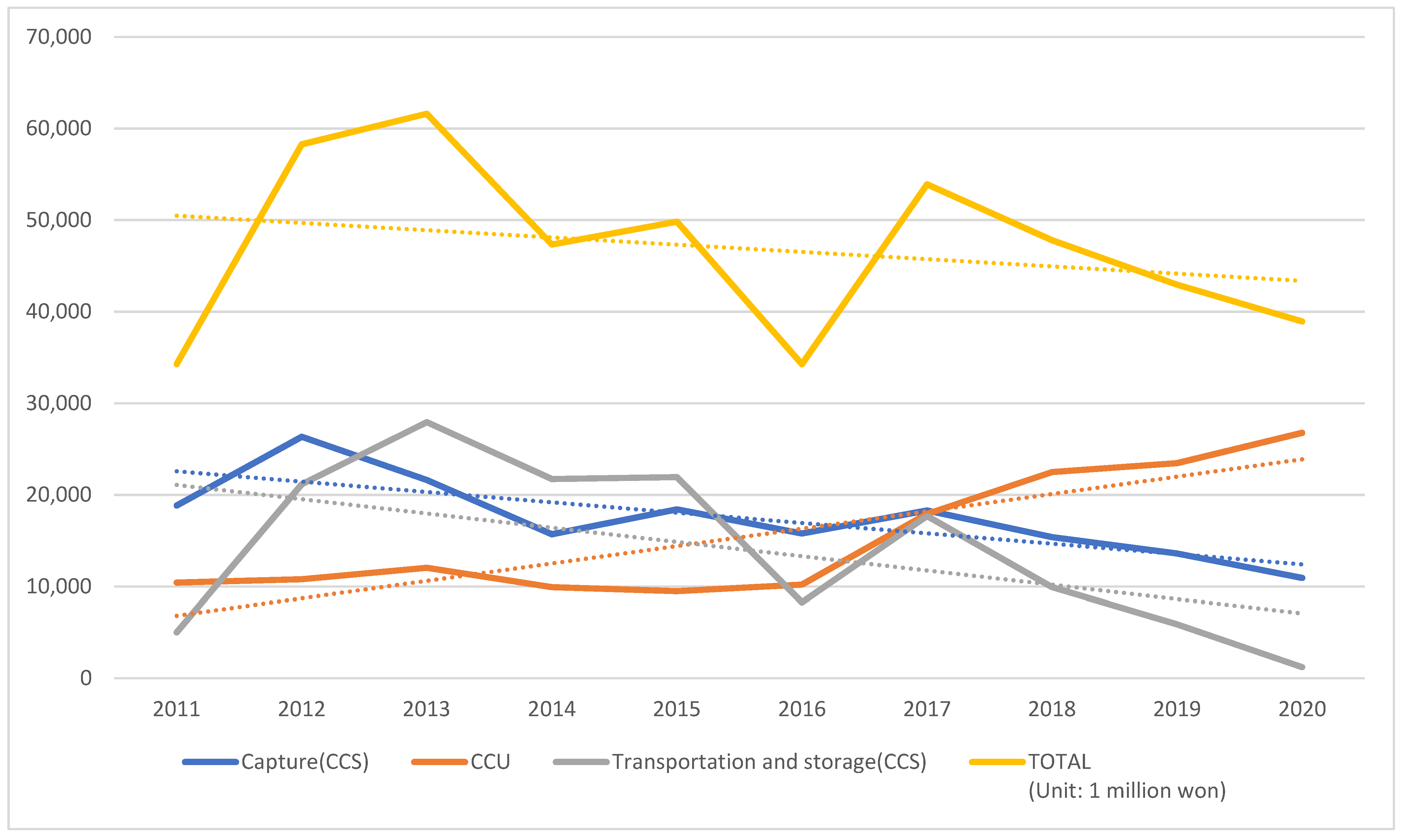 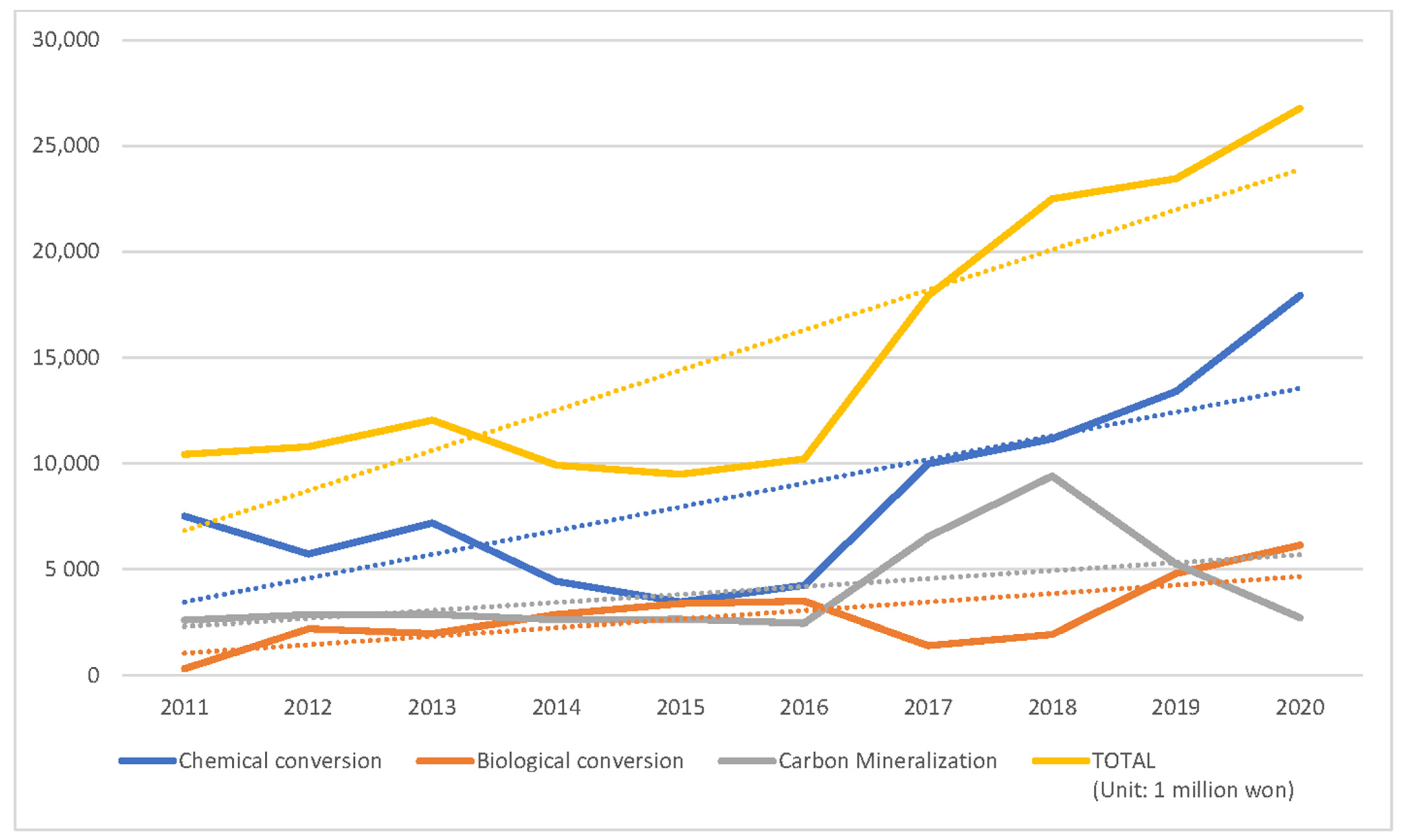 Figure 2. R&D investment in CCU over the past ten years from 2011 to 2020 (data from MSIT, 2021).
Since 2016, R&D investment in chemical conversion and mineral carbonization has increased rapidly, reflecting the project cost of the National Strategic Project for Carbon Resourceization. In addition, R&D investment in next-generation carbon resource conversion projects, such as the Korea CCS 2020 project and the C1 Refineries project, is reflected in the increase in chemical conversion investments [10][15].
CCS technology investment costs showed a decreasing trend. CCU technology investment costs showed an increasing trend. There was no significant change in the CCUS overall technology investment costs, including CCS and CCU.
The Ministry of Science and ICT, the major R&D-related ministry in Korea, categorizes R&D into basic, applied, and development research. Basic research is defined as experimental results or theoretical studies mainly conducted to acquire new scientific knowledge underlying natural phenomena and observable objects without targeting specific applications or uses.
Applied research is defined as an original study conducted to acquire new scientific knowledge for special and practical purposes and goals. Development research is defined as a systematic activity to substantially improve what has already been produced or installed, such as the production of new materials/products and devices, installation of new processes/systems or services, and knowledge acquired by research and experimental experience [18].
Figure 3 analyzes R&D investment for each of the research stages in major CCUS sub-sections (CCS capture, CO2 chemical conversion, CO2 bioconversion, and Carbon mineralization). The research stage is divided into basic, applied, and development research. CO2 capture and mineral carbonization make up a large proportion of development research compared to basic and applied research, indicating that research for commercialization in these two areas is being conducted earlier than other CCUS technologies.

Figure 3. R&D investment for each of the research stages in major CCUS sub-sections in Korea from 2011 to 2020.
Major institutions around the world, including the National Academy of Sciences, Engineering, and Medicine (NASEM) (U.S) and the New Energy and Industrial Technology Development Organization (NEDO) (Japan) evaluate that, among various CCUS technologies, CCS and carbon mineralization are the two with the highest probability of commercialization. Under such consideration, the trend in CCUS R&D investment shows practical significance compared to the global trends.
The difference among basic, applied, and development research R&D in CO2 chemical conversion and biological conversion investment is not significant [15][19][20].