Submitted Successfully!
Thank you for your contribution! You can also upload a video entry related to this topic through the link below:
https://encyclopedia.pub/user/video_add?id=20620
Check Note
2000/2000
Per- and Poly-Fluoroalkyl Substances’ Pollution
Edit

Per- and poly-fluoroalkyl substances (PFASs) refer to a class of compounds in which all or part of the hydrogen atoms linked to carbon atoms in alkane molecules are replaced by fluorine atoms. Because of the strong polarity of the C-F bond, PFASs have more stable and more excellent properties than other hydrocarbons (such as a remarkably high chemical stability and excellent hydrophobicity and oleophobicity), so they have been used in various fields of production, such as plastic wrap, paper, coatings, poly-tetrafluoroethylene products and foam fire-extinguishing agents.

Per- and poly-fluoroalkyl substances (PFASs) refer to a class of compounds in which all or part of the hydrogen atoms linked to carbon atoms in alkane molecules are replaced by fluorine atoms [1]. Because of the strong polarity of the C-F bond, PFASs have more stable and more excellent properties than other hydrocarbons (such as a remarkably high chemical stability and excellent hydrophobicity and oleophobicity), so they have been used in various fields of production, such as plastic wrap, paper, coatings, poly-tetrafluoroethylene products and foam fire-extinguishing agents [2]. According to different functional groups and physicochemical properties, PFASs can be divided into (1) ionic PFASs (i-PFASs), such as per-fluoroalkyl carboxylic acids (PFCAs) and per-fluoroalkane sulfonic acids (PFSAs), and (2) neutral PFASs (n-PFASs), such as fluorotelomer alcohols (FTOHs) and per-fluoro-octane sulfo-namidoethanols (FOSEs) [3]. The PFASs referred to in this paper are i-PFASs. Due to the mass production and use of some PFASs, PFASs have been widely detected in various environmental media, animals and plants in recent years [4][5][6], and have also been found in the human body [7][8]. With intensive studies, the persistence, bioaccumulation, long-distance transportation and biohazard of some long-chain PFASs (long-chain PFASs refer to PFCAs with seven or more perfluorinated carbons and PFSAs with six or more perfluorinated carbons) have been gradually confirmed [9]. Subsequently, some countries and organizations have successively issued series of rules and regulations to restrict the use of such substances [10], and PFOS, PFOA and their salts were listed under Annex B and Annex A of the Stockholm Convention on Persistent Organic Pollutants in 2009 and 2019, respectively [11][12]. Meanwhile, in 2019, the Persistent Organic Pollutants Review Committee (POPRC) recommended that per-fluorohexane sulfonate acid (PFHxS) and its salts be listed in Annex A of the Convention [13]. In addition, at the 17th meeting of the POPRC, held in January 2022, it was suggested that long-chain PFCA (involving carbon-chain lengths from 9 to 21), its salts and related compounds should be listed in Annexes A, B and/or C of the Stockholm Convention on Persistent Organic Pollutants [14]. With the restricted use of PFOS, PFOA and other substances, some short-chain per-fluoroalkyl acids and new polyfluoride substitutes [such as 6:2 chlorinated polyfluorinated ether sulphonic acid (F-53B)] are becoming research focuses [15][16]. The international community is paying increasing attention to PFASs.
Since 2000, some major manufacturers have phased out the production of PFOS, PFOA and their salts [17]. The production of these substances has gradually shifted from developed countries, such as North America and Europe, to developing countries, especially China [18]. China has become the largest manufacturer and supplier of PFOS and PFOA in the world since 2004 [3]. Some studies have estimated the emissions of PFOA and its salts in China from 2004 to 2012. The results show that the cumulative emissions reached 250 tons, and China became the largest PFOA emission site at that time [19]. Therefore, the environmental monitoring of and risk research on PFASs in China have attracted international attention. Studies have shown that PFASs can exist stably in water environments [20], and the ocean is the final sink for PFASs [21]. Therefore, it is necessary to explore the pollution characteristics and possible sources of PFASs in China’s waters. 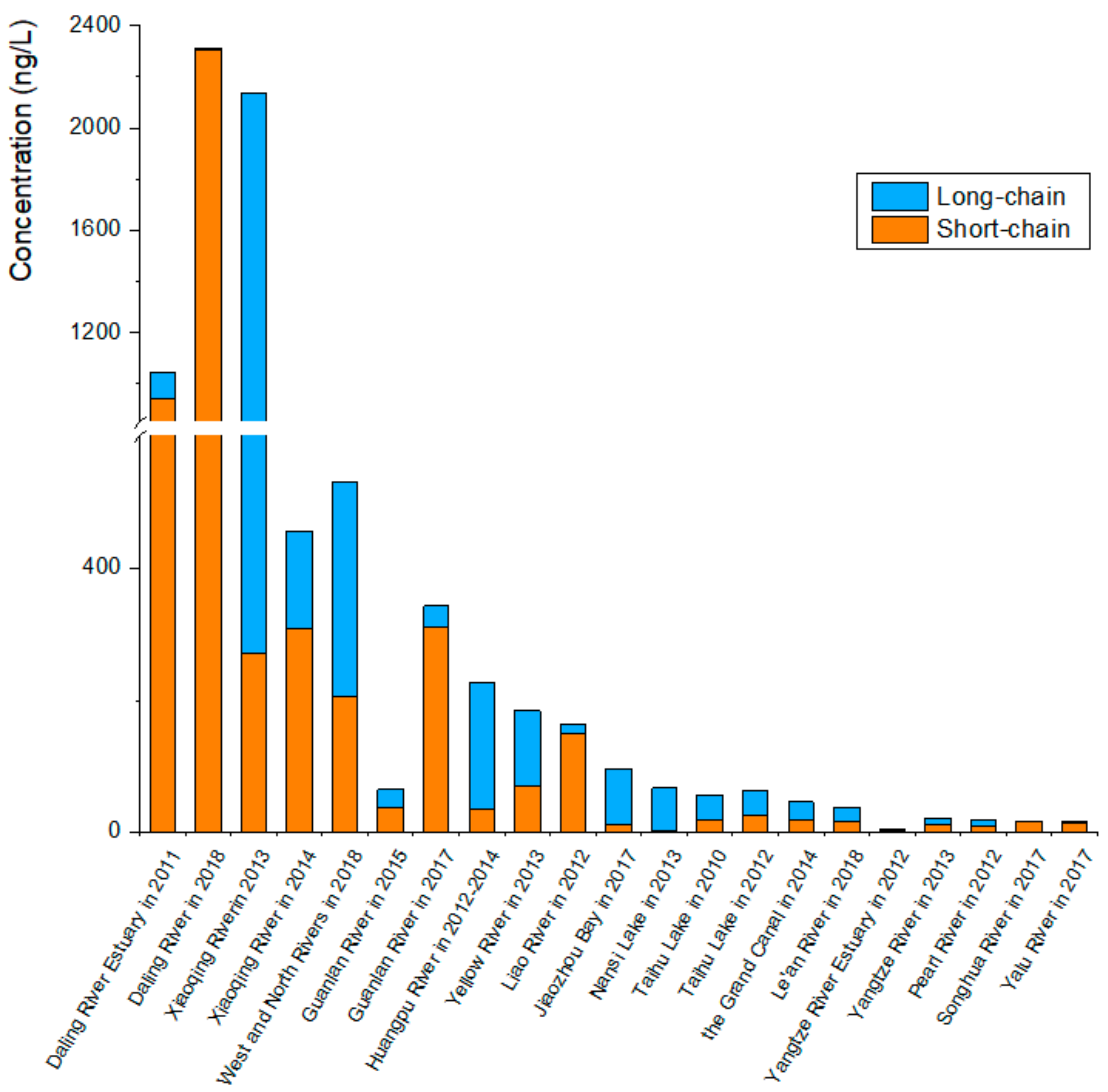 Figure 1. Levels and compositions in surface water in China in past ten years.
Table 1. PFAS concentrations in surface water in China in past ten years.
In addition, the concentrations of PFASs in the water bodies after flowing through WWTPs were obviously higher than those before the water flowed through WWTPs, so the sewage discharge of WWTPs was another main source of PFASs in surface water. For example, after flowing through WWTPs, the concentration of PFASs in Huangpu River, mentioned above, rose from ~200 to ~250 ng/L [28]. The peak concentration of the Yongding River occurred at 108 ng/L downstream of the WWTP in its watershed and 12.4 ng/L upstream [40]. Due to the sewage discharged by WWTPs entering into the north of Dianchi Lake directly, concentrations in the north (35.8–135.9 ng/L) were higher than those in the south (less than 25 ng/L) [30]. It was found that the concentrations of PFASs in water flowing through cities with high degrees of urbanization had significant rises because of traffic, commercial activities and so on. For example, the West and North Rivers flow through the cities of Shaoguan, Heze and Qingyuan, and rapid urban development had a remarkable impact on the PFASs in the water bodies with the concentrations up to 1.06 × 103 ng/L [45]. Yanghe River (one of the tributaries of the Yongding River) ran through the highly urbanized city of Zhangjiakou with a high concentration of 197 ng/L, and Sangan River, another tributary of the Yongding River, ran through less densely populated and less urbanized areas with relatively smaller concentrations ranging from 6.67 to 9.74 ng/L [40]. Likewise, the Songhua River and the Yalu River, which were relatively less densely populated, also had relatively low concentrations of PFASs, with a maximum of only 32 ng/L [43].
In the past, long-chain PFASs made the greatest contributions, especially PFOA and PFOS. In recent years, short-chain PFASs have gradually become the main compounds in water pollution, such as PFBA, PFBS, PFHxA and PFPeA. For instance, in the Daling River, the proportions of PFBS (35.9% in 2011 and 48% in 2018) and PFBA (32.8% in 2011 and 41% in 2018) have gradually increased [23][24]. On the contrary, PFOA (17.5% in 2011 and 2.3% in 2018) showed a decreasing trend [23][24]. In the main stem of the Pearl River, PFBS contributed 36% while PFOS contributed 21% [32], and the same phenomenon was found in the tributaries of the Pearl River (52% PFBA and 25% PFOA) [45]. Similarly, PFHxA accounted for 46% in spring and 53% in summer for PFPeA, with short-chain PFASs predominating in the Jiulongjiang estuary [39].