Submitted Successfully!
Thank you for your contribution! You can also upload a video entry related to this topic through the link below:
https://encyclopedia.pub/user/video_add?id=20607
Check Note
2000/2000
Goat Breeding for Xerophytic Thickets Management in Madagascar
Edit

Spiny thickets or xerophytic thickets (XTs) are a type of shrubby vegetation found in the far south and southwest of Madagascar, the driest parts of the island. This type of vegetation, which is rich in endemic animal and plant species, is endangered. Extensive local goat breeding (Capra hircus, for meat and milk production) based on XT browsing is an important source of household income. Improved goat breeding is an alternative to wood charcoal (WC) production and slash-and-burn agriculture (SBA), which are unsustainable activities.

Spiny thickets or xerophytic thickets (XTs) are a type of natural shrubby vegetation dominated by Didiereaceae and Euphorbiaceae [1] that occupies the littoral part of the southwest and the far south of Madagascar (Figure 1). Xerophytic thickets are a type of vegetation with a high endemism rate [2] and provide a multifunctional space and such goods and services as arable land [3][4], food and medicinal plants [5][6], goat rangeland [7][8][9], and timber and fuelwood (wood charcoal and firewood [6][10][11]). Similar to dry forests, XTs are currently undergoing significant deforestation (annual forest loss > 1%; [3][4]). Slash-and-burn agriculture (SBA) is the main cause of this deforestation [3][12], while wood charcoal (WC) production and to a lesser extent goat browsing are the main causes of XT degradation [11][13][14]. A search for sustainable alternatives to these unsustainable practices is necessary to stem this XT degradation/deforestation. 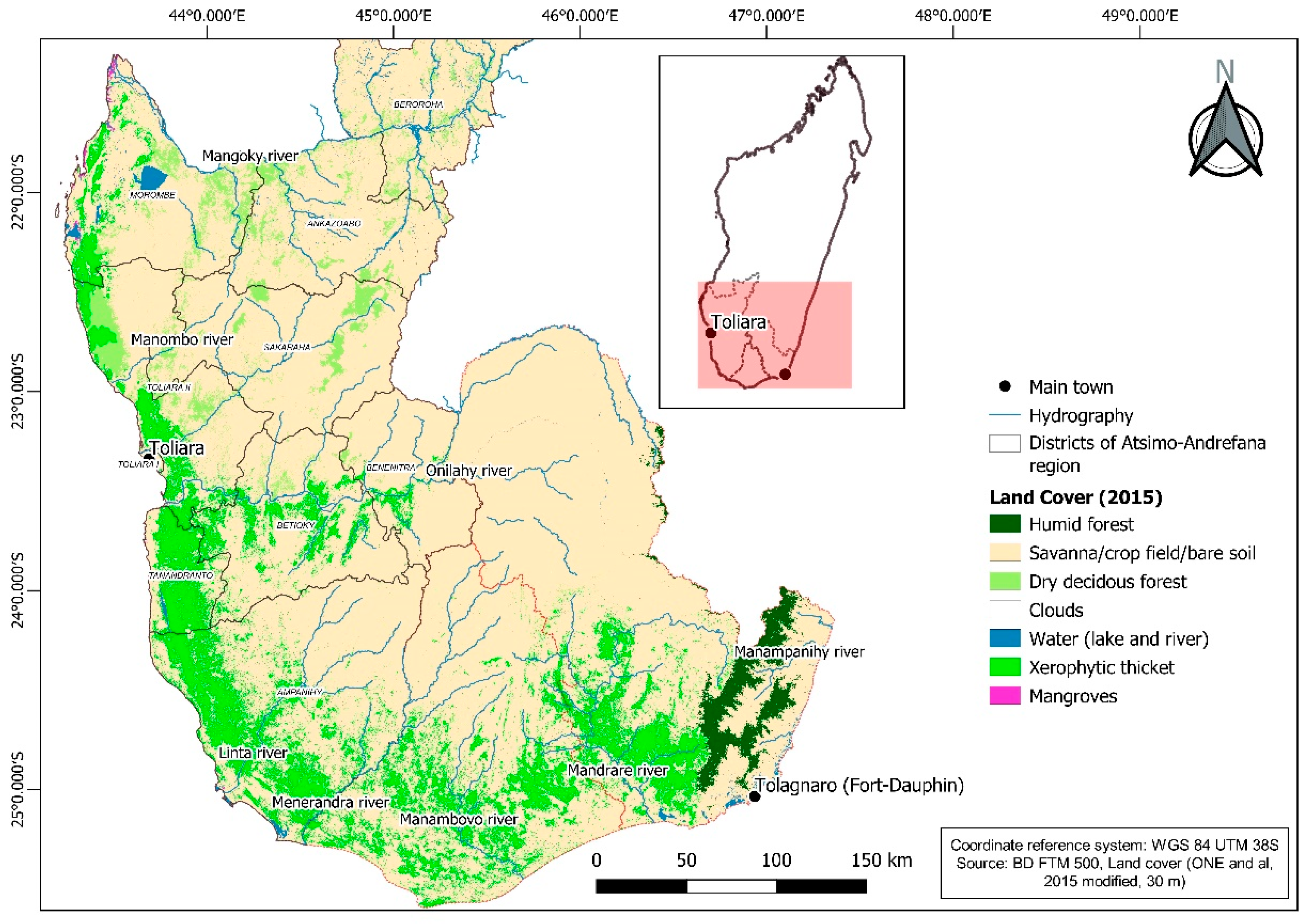 Figure 1. Southwestern Madagascar (the Atsimo-Andrefana region) and xerophytic thicket locations.
The development of rainfed agriculture would not be sufficient to reduce the dependence of households on forest resources, as the semi-arid character of the climate in southwestern Madagascar limits agricultural yields [15], while extensive local goat breeding (Capra hircus) is less impacted by rainfall variability [16][17]. As in other semi-arid areas, this extensive goat breeding has increased the livelihood resilience of populations living in and around the XTs to these climate risks [17]. However, goat breeding has a poor reputation in environmental terms. At the international level, many research papers show that intensive goat browsing reduces vegetation cover [18][19][20][21][22] and inhibits the regeneration of fodder species [23][24]. Goat browsing can also reduce biomass production and plant diversity [21][25][26]. However, when the stocking density is moderate, goat browsing can stimulate shrub shoot growth [27] and twig biomass production [26]. Furthermore, under moderate stocking conditions, goats can enhance seed dispersal in semi-arid ecosystems [28][29]. In addition, alternative forms of pasture management, such as the incorporation of planned rest periods (the opposite of continuous browsing), may reduce the negative effects of browsing on rangeland and increase plant cover [30].

Malagasy XTs are found in the southwest and the far south of Madagascar (Figure 1 and Figure 2a). These areas have a semi-arid climate with mean annual rainfall that ranges from 300 to 800 mm, ≥9 dry months annually, and a water deficit > 400 mm [2][31]. XTs are restricted to an altitude below 400 m and cover approximately 17,000 km2 (Figure 1; [32]). XT tree and shrub species show adaptations to drought, such as microphyllous (a reduction in the size of leaves) or aphyllous forms (a reduction in the number or a complete lack of leaves), spinescence (the development of thorns on branches instead of leaves), and pachycauly (swelling of the trunk, which allows water to be stored more efficiently) [2][33]. 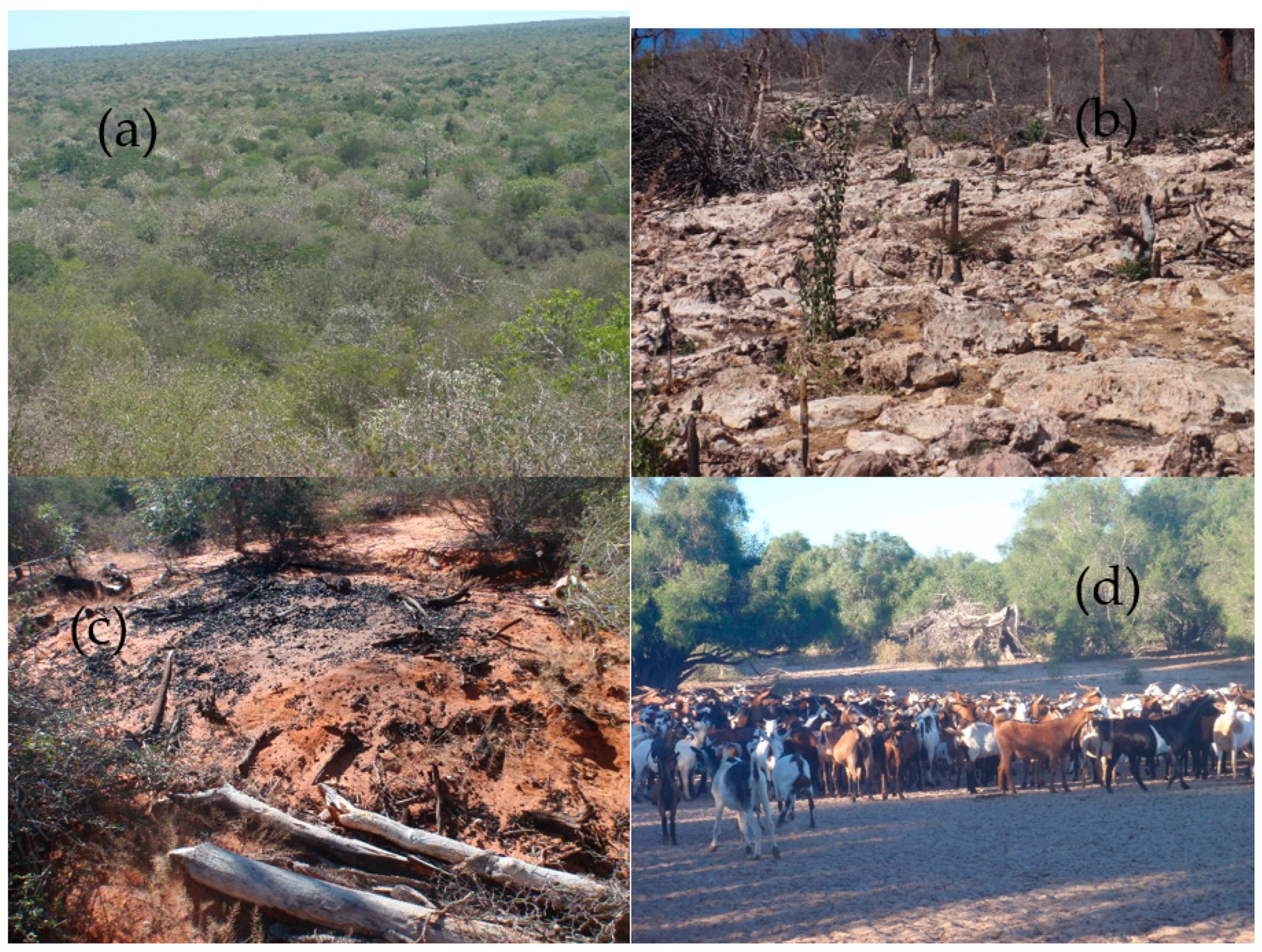 Figure 2. Xerophytic thicket (XT) landscape: (a) global view; (b) XTs after slash-and-burn agriculture; (c) a former wood charcoal kiln; (d) a goat herd.
Malagasy XTs lie essentially on two main soil types: calcisol (rocky calcareous soil) and lixisol (yellow/red sand soil), both of which are shallow and poor in organic matter and nitrogen [7][34]. In southwestern Madagascar, from the coastal zone to the inland area (from west to east), there are two main types of XT [2][35]:

- Short shrubby XT (Figure 2a), dominated by Euphorbia spp. (mainly E. stenoclada and E. laro) not exceeding 4 m in height, represents the most xeric formation. The only Didiereaceae species occurring in this kind of XT are Alluaudia comosa and Alluaudia fiherenensis; and
- Tall XT with Didierea madagascariensis, Adansonia fony, and Commiphora lamii associated with an average height of 4–6 m and emergent trees reaching 8–10 m.

Malagasy XTs have a high percentage of plant endemism [36][37]: 48% of recorded genera and 95% of recorded species are endemic to Madagascar. For example, the Didiereaceae family has 11 species, of which 6 are endemic to Madagascar [33].
An expansion in cropland and further fragmentation of the remaining XTs are expected in the next three to four decades if no improvement is made in the livelihoods of households living in and around XTs, including food self-sufficiency [38]. Brinkmann et al. [3] demonstrated on the Mahafaly Plateau that SBA is mainly practised in remote areas far away from roads and markets. Randriamalala et al. [4] showed that SBA is more widely practised in the wetter, eastern part of the XT.

Malagasy XTs are browsed by goats (Figure 2d) [7][9]. Goat breeding in southwestern Madagascar is extensive and depends mainly on the availability of fodder in XTs [8][9][39][40]. Goats are bred for meat and milk production. The diet of goats consists mainly of the leaves of approximately 100 shrub species [9][39][40]. A partial list of these species is presented in Appendix A in terms of fitness for wood charcoal production and goat palatability estimated by the frequency of goat visits during one dry and one rainy season [40]. The diet of goats in the dry season consists of green leaves within their reach [39][40] or leaves, flowers, and fruits that have fallen to the ground from fodder shrubs. In the rainy season, the proportion of herbaceous species in the diet of goats increases but remains small (<35% of the daily feeding time; [9]). In addition to natural fodder, agricultural residues such as maize bran, cassava husks, and spoiled seeds and pods also contribute to the diet of goats [39]. They are available at the end of the rainy season, during the harvest period, and their consumption is limited in terms of quantity. The low use of feed supplements makes daily browsing times longer (10–13 h/day) [8][40]. The use of feed supplements may explain the relatively short browsing time (8–10 h/day) in other semi-arid areas (Senegal [41] and Oman [42]), as goats return to the pen earlier to receive feed supplements from crop residues. Goat herds in southwestern Madagascar may travel 7–15 km/day in the rangeland in search of food but do not stray more than 6 km from their night enclosure [8][40].

4.1. Slash-and-Burn Agriculture, the Main Cause of Deforestation in XTs

Post-SBA recovery in dense humid forests [43][44][45][46] and in dense dry forests [47][48][49] is fairly well documented in Madagascar. In contrast, studies on post-SBA recovery of XTs are scarce [35][50]. The species richness and floristic composition of post-SBA XTs vary significantly between soil types: XTs on calcisol are richer in species than XTs on lixisol. The species composition and richness of overstory XTs (>1.3 m in height) have not changed since the farmers abandoned the plots. However, structural parameters such as total height, basal area, and mean diameter at breast height have increased significantly since plot abandonment, irrespective of the soil type. The slowness of the growth of shrub species found in post-cultivation XT plots may explain this lack of a change in the diversity and floristic composition through secondary succession stages [51]. For example, for nine XT species, it would take between 30 and 130 years to reach a diameter at breast height of 10 cm and over 100 years to reach a diameter of 30 cm [51].

All of the WC supplying the town of Toliara, the main city in southwestern Madagascar, comes from the XTs and the dense dry forests of southwestern Madagascar [11][14][52]. Approximately 43,000 t of WC are consumed annually by the town of Toliara [53], which is equivalent to an annual wood loss of over 340,000 t based on a carbonization yield of 0.125 [54]. The fuelwood market generally ensures the subsistence of poor households and is an important source of income during the dry season [55][56][57][58]. The semi-arid climate of southwestern Madagascar is characterized by a succession of drier and wetter periods, both of which last from 3 to 7 years [58]. Crop harvests are particularly poor during drier periods when WC production activities intensify [17]. All households produce WC over a period of 1 to 12 months, depending on their wealth [55][56]. Wood charcoal production is also a gap-filler during the agricultural off-season and a relatively rapid way to generate cash at short notice [57]. Wealthier households with more livestock (zebus and goats) engage in this activity for a shorter period (<3 months) and at the end of the dry season around October–November [55].

5. Goat Breeding: An Alternative to Wood Charcoal Production and Slash-and-Burn Agriculture in XTs

Goat breeding in southwestern Madagascar is extensive and suffers from low production rates due mainly to (i) long inter-gestation periods [59] and (ii) the high rate of mortality of kids reported by farmers [39][60]. Despite these limitations, goat breeding is an important source of income for farmers [17][55]. Indeed, goat sales constitute more than 50% of the annual household cash income in the commune of Soalara-Sud [55] and cover 15–29% of the net food expenditure on the entire Mahafaly Plateau (compared with less than 6% for food crops; [17]). However, the key question regarding improvements to goat breeding practices is: would this income incentive be sufficient to persuade the farmer to breed goats rather than to cultivate the land or to produce WC? Improved husbandry practices can indeed significantly increase the production of livestock and thus the income obtained from it. However, this improvement must be simple and not involve many changes in current pastoral/breeding practices. The batch breeding technique satisfies these conditions. It consists of dividing the herd into the following batches: (i) young and lactating females; (ii) adults (reproductive animals); and (iii) castrated males and culled adults. The animals from the last batch and the surplus animals from the second batch are intended for sale. The application of this breeding method involves oestrus synchronization to obtain homogeneous batches of animals and to improve the reproductive performance of the goats. Flushing, which is known to have positive effects on small ruminant reproduction [61][62], is a simple technique used to achieve this oestrus synchronization. Andrianarisoa et al. [60] conducted farm trials in southwestern Madagascar on the control of goat reproduction using the flushing technique. The treatment consisted of feeding young females dry cassava at a rate of 500 g/day/individual for 45 days in June–July, a period of calving, and the availability of a small amount of fodder in the rangeland [60]. Cassava is available locally, and dry cassava can be purchased at local markets at a low cost. The aim is to change the birth period from the dry season to the short rainy season when shrubs have leaves.
Flushing significantly improves several parameters of goat reproduction [60], including the fertility rate (the ratio of the number of females giving birth to the number of bred females), the fecundity rate (the number of kids born in relation to the number of bred females), and the survival rate at one month from birth (the ratio of the number of kids alive at one month to the number of kids born alive). Thus, the use of this oestrus synchronization technique would enable 1.5 (3 parturitions/2 years) to 2 parturitions per year instead of 1 (goats in southwestern Madagascar give birth every 12.4 months on average; [60]) in addition to producing homogeneous batches of animals. Batch breeding expenses were related to the purchase of feed supplements for the dry period (dried cassava; USD 2.90/head/year) and deworming products (USD 0.15/head) to ensure the comparability of treated and control goat groups [60]. All of these products are locally available. The potential income from the sale of surplus produced animals increases as the number of bred females increases (Figure 3). The challenge is to manage both the increase in income from goat breeding and the number of young females, which is limited by the XT carrying capacity. 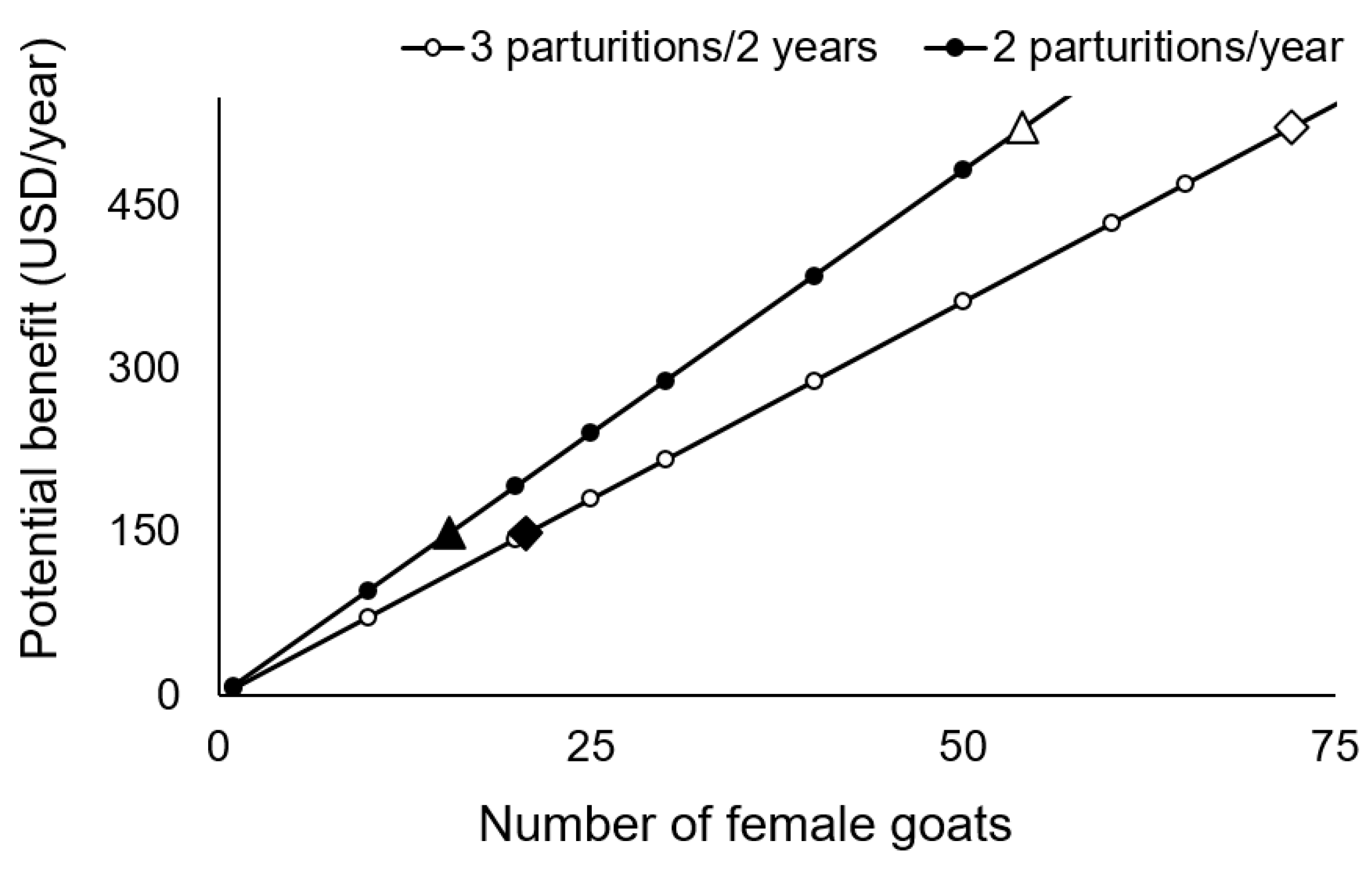