+1 point
Thank you for your contribution! You can also upload a video entry related to this topic through the link below: https://encyclopedia.pub/user/video_add?id=20506
Check Note
2000/2000
Animal Models to Study Amyotrophic Lateral Sclerosis

Amyotrophic lateral sclerosis (ALS) is a fatal, multigenic, multifactorial, and non-cell autonomous neurodegenerative disease characterized by upper and lower motor neuron loss. Several genetic mutations lead to ALS development and many emerging gene mutations have been discovered in recent years. Over the decades since 1990, several animal models have been generated to study ALS pathology including both vertebrates and invertebrates such as yeast, worms, flies, zebrafish, mice, rats, guinea pigs, dogs, and non-human primates. Although these models show different peculiarities, they are all useful and complementary to dissect the pathological mechanisms at the basis of motor neuron degeneration and ALS progression, thus contributing to the development of new promising therapeutics.

Amyotrophic lateral sclerosis (ALS), also known as Charcot’s or Lou Gehrig’s disease, is a multisystem neurodegenerative disease, characterized by heterogeneity at the genetic, neuropathological, and clinical levels [1]. The progressive degeneration of upper and lower motoneurons (MNs) occurs during disease progression and affects pyramidal cells in the cortex, the corticospinal tract, and spinal motoneurons, usually sparing the extraocular and sphincter muscles [1][2][3]. The effects of MN loss evolve in muscle weakness, fasciculations, atrophy, spasticity, and hyperreflexia, eventually leading to paralysis, and patients typically die due to respiratory failure within three to five years from diagnosis [4][5]. Early pathogenic processes involve axonal degeneration and impairment of nerve terminal function, anticipating MN loss, and the onset of clinical symptoms [6].
Several causes have been proposed as the basis of the disease onset and progression, such as excessive calcium and glutamate excitotoxicity [7][8][9][10][11][12][13][14], oxidative stress [15][16][17], axonal damage and transport dysfunction [18][19][20][21], neuroinflammation [22][23], proteins misfolding and aggregation [24][25], proteasome impairment [26][27], endoplasmic reticulum stress [28][29], mitochondrial dysfunction and insufficient energy supply [30][31][32], and altered RNA processing [33][34]. Initially, ALS has been considered mostly as a MN disorder, but to date, much evidence confirms that ALS is a non-cell-autonomous disease, involving astrocytes, oligodendrocytes, microglia, and blood-derived immune cells [35][36][37]. Moreover, ALS forms a neurodegenerative disease continuum with frontotemporal dementia (FTD), and up to 50% of ALS patients concomitantly develop cognitive impairment or behavioral changes [38].
Most ALS cases are sporadic (sALS), and up to 10% have been classified as familial ALS (fALS) [39]. Currently, fALS-associated mutations have been found in approximately 50 genes, and more than 30 of them are thought to be causative [40][41]. The most common mutated genes are superoxide dismutase-1 (SOD1), chromosome 9 open reading frame 72 (C9orf72), fused in sarcoma (FUS), and TAR DNA-binding protein (TARDBP) [42]. Moreover, a significant fraction (about 20%) of sporadic cases carried a confirmed or likely pathogenic mutation, and almost all had no family history of ALS. This occurrence establishes the importance of routinely performing the genetic sequencing on ALS patients to improve disease subclassification, patient stratification, and clinical care [43].

Mutations of the gene encoding for Cu/Zn SOD1 are among the most frequent ones in ALS [41]. Since SOD1 catalyzes the dismutation of superoxide anion in oxygen and hydrogen peroxide, the different mutations result in the decrease of free radicals detoxication (loss of function, LoF), but also in a toxic gain of function (GoF; [44]).
Mutations related the TARDBP gene, encoding the TAR DNA binding protein 43 (TDP-43), have been also identified in ALS [45]. Mutated TDP43 is indeed the main protein found in protein aggregates in the cytoplasm of MNs [46][47][48], contributing to the alteration of several cellular processes in ALS [49].
Other gene mutations involved in ALS are those related to the FUS/TLS gene, encoding for the RNA-binding protein FUS [50][51]. This protein is physiologically located in the nucleus but, when mutated, it aggregates in the cytoplasm of neurons [47][52], leading to cell death [48].
More recently, the repeated expression of hexanucleotide “GGGGCC” (G4C2) in the C9orf72 gene’s non-coding region has been identified in ALS and demonstrated to alter critical cellular processes, including autophagy, membrane trafficking, immune response [53][54][55][56]. It is not yet clear why some patients with C9orf72 repeat expansion manifest ALS phenotype, while others only FTD or both. Moreover, there is no apparent correlation between repeat size and disease severity [57]. To date, three different hypothetic mechanisms by which this genetic mutation may induce ALS have been hypothesized and none of them are exclusive [58]. The first hypothesis sustains that the repeat expansion may cause C9orf72 LoF, which contributes to neurodegeneration by yet unknown mechanisms. The second hypothesis is related to an RNA toxicity generated by G4C2 repeat-containing RNA foci that accumulate in the nucleus and induce the concomitant entrapment of other RNA-binding proteins that can no longer exert their physiological role. The third possibility deals with the accumulation of sense and antisense repeat proteins in the form of aggregation-prone dipeptide repeats.
All the above gene mutations contribute to ALS development and progression by triggering different toxic processes [59], such as oxidative damage and intracellular protein aggregates [17][60][61][62][63][64], axonal transport impairment [18], mitochondrial dysfunction [65], RNA metabolism impairment [66], and excitotoxicity [7][9][12]. It should also be considered that genetic factors not only affect MNs, but also actively contribute to the degeneration or the activation of other CNS cells such as astrocytes and microglia, leading to neuroinflammation and other pathological phenomena [67].
Yet, there are other less frequent protein mutations involved in familial ALS form, such as: VAMP-associated protein B (VABP), Optineurin (OPTN), Valosin Containing Protein (VCP), Ubiquilin-2 (UBQLN2), Matrin 3 (MATR3), TANK-Binding Kinase-1 (TBK1), NIMA-related Kinase-1NEK1, and C21orf2 mutations [68][69].
Finally, it is important to consider also the interplay between environmental factors and genetic mutations that contributes to further complicate the multifactorial scenario of ALS [70][71].

Following the continuous identification of mutated genes, many animal models have been developed to unravel the pathological mechanisms that are crucial to MN degeneration. Indeed, the cellular alterations in ALS are likely the result of many different interacting mechanisms leading to a larger network disruption. Modeling ALS as human neurodegenerative disorder into any other species, especially in mammals, is certainly a hard task in terms of face, construct, and predictive validity, and ALS is no exception. Even though the obvious limitations of animal models, and possibly for this very reason, their number is still growing in the attempt to obtain further items to identify adequate targets for the development of effective therapies, which this very complex disease urgently needs [72][73][74][75].
The purpose is to provide a comprehensive and up-to-date overview of the available ALS animal models, with the aim of offering details, including pros and cons, useful to design and optimize preclinical studies to investigate ALS. The researchers examined a variety of experimental models of the disease, from the most used to the least common, based on the ALS genetic mutations and the different organisms in which they have been reproduced. In addition, the researchers have also included some very interesting non-genetic models in which MNs injury is based on autoimmune mechanisms or on the exposure to possible ALS environmental risk factors

Although more than 50 disease-modifying drugs with different mechanisms of action have been studied in the last decades, there is an urgent need of effective therapies for ALS. Following the initial discovery of mutations in fALS patients, it was possible to model the human disease in living organisms to elucidate the mechanisms underlying MN death in ALS.
Similarly to human studies, accurate preclinical guidelines for phase-based efficacy evaluation of innovative therapeutic approaches and more transparency in reporting the experiments involving animals [76][77] would produce more reliable results than the majority of the current studies present in the literature. Indeed, the rationale for the choice of a specific ALS model, experimental design details, and access to the data obtained can be very useful to better interpret the results, particularly by clinicians who try to translate into clinical trials the most promising preclinical data.
Here, the researchers provide an overview of the different experimental models, from yeast to non-human primates, to investigate ALS pathophysiology. The researchers clustered these models on a genetic mutation criterion, highlighting the peculiarities and the ALS-related molecular, cellular, and clinical symptoms, also focusing on pros and cons that need to be considered when approaching the study of ALS pathogenesis or new experimental therapies (Figure 1). Clearly, the main advantage of in vivo over in vitro studies is the higher chance to clarify the multifaced pathological mechanisms that characterize the human pathology during disease progression. Although a comparative analysis of these models is required to choose the best one(s) required for the planned investigation, if we want to better understand the causes of ALS, we should never forget their limitations. 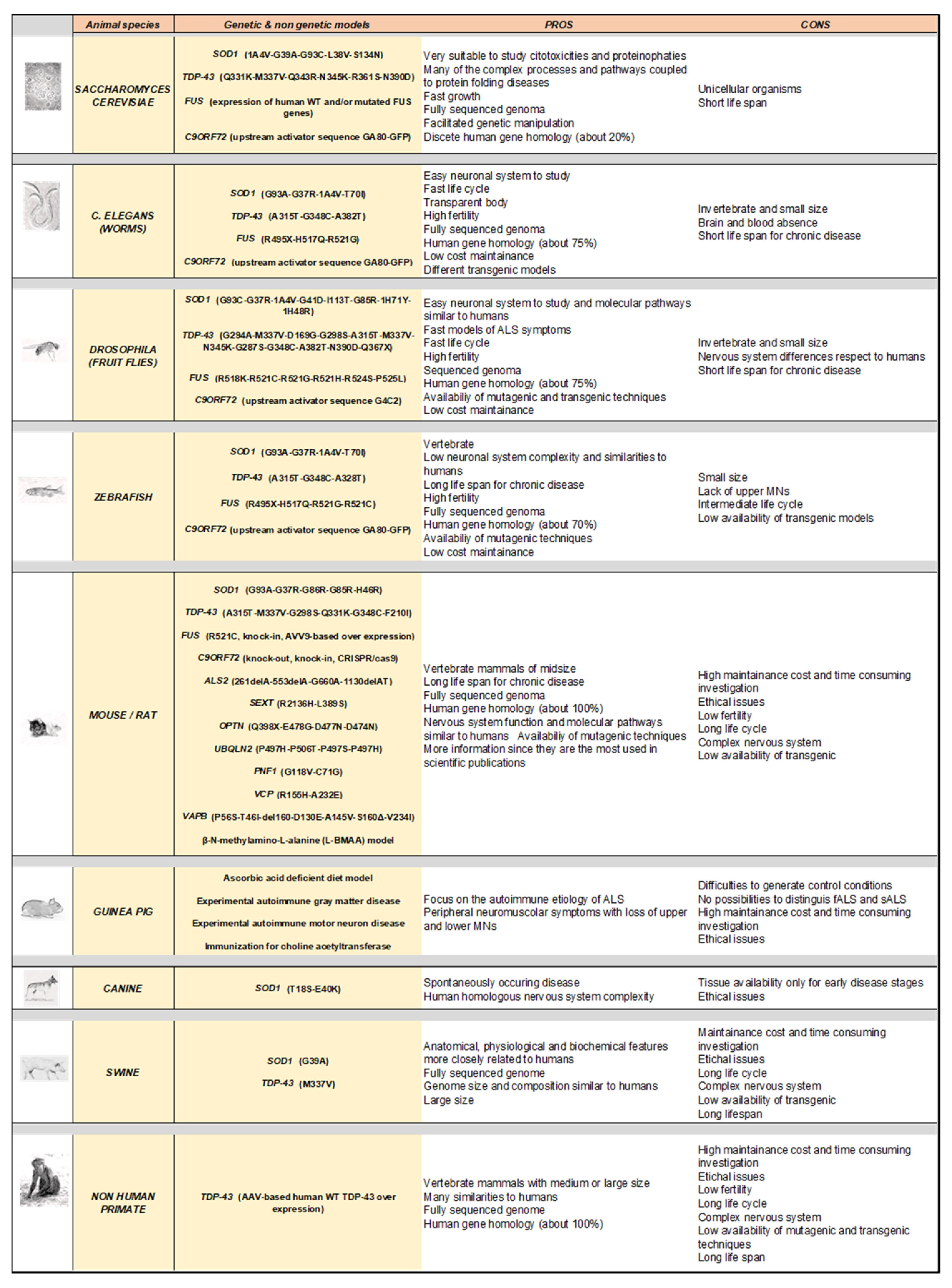 More
© Text is available under the terms and conditions of the Creative Commons Attribution (CC BY) license; additional terms may apply. By using this site, you agree to the Terms and Conditions and Privacy Policy.
Upload a video for this entry
Information
Subjects: Pathology
Contributor MDPI registered users' name will be linked to their SciProfiles pages. To register with us, please refer to https://encyclopedia.pub/register :
Marco Milanese
View Times: 157
Revisions: 2 times (View History)
Update Date: 19 Apr 2022
Table of Contents
1000/1000
Hot Most Recent