+1 point
Thank you for your contribution! You can also upload a video entry related to this topic through the link below: https://encyclopedia.pub/user/video_add?id=20495
Check Note
2000/2000
Emerging Threat of Microplastic Pollution to Terrestrial Plants

Microplastics (MPs) are ubiquitous and constitute a global hazard to the environment because of their robustness, resilience, and long-term presence in the ecosystem.

There are countless advantages of using plastics, including chemical and mechanical qualities, but the pollution caused by the extensive use of plastic has been a major concern in recent years. As a result of the inappropriate disposal of plastic garbage, it is now known to contaminate the environment, with simultaneous impacts on living beings [1]. A considerable amount of MPs (i.e., plastic particles less than 5 mm in diameter) has been found on every continent, from the highest mountain peaks to the deepest ocean depths [2]. Moreover, the concern regarding the omnipresence of MPs has been arising since the study conducted in 2004 [3] that revealed the presence of MPs in most of the samples collected from different beaches. The contamination of seawater is a continued problem, as one million metric tons of plastic is reported to be dumped into the ocean [4]. Likewise, MPs occurrence in terrestrial ecosystems is increasing but have been investigated less extensively than MPs in marine environments. Thus, the pollution caused by the excessive use of plastic film mulch and a low recycling rate are serious concerns [5]. Thus, plastic pollution is expected to worsen in the foreseeable future.

Owing to the extensive use of plastic, MPs are pervasive, including in the atmosphere, soils, seawater, and freshwater, as well as in the sediments of Artic Lake [6]. Apart from the contamination caused by their widespread use, MPs have been reported to adsorb a variety of inorganic and organic pollutants, due to their small volume and high specific surface area, resulting in the accumulation of pollutants, posing a slew of risks to the surrounding flora and fauna, including humans [7]. Further, they can interact with a vast spectrum of biota because of their long lifetime, widespread distribution across habitats, and small size; yet evidence on MP exposure and the associated repercussions is still sparse in the literature. Therefore, many researchers have explored the impacts of MPs on a variety of marine and freshwater organisms over the last decade, but the situation is reversed in the case of terrestrial plants. However, plants are key primary producers in terrestrial ecosystems and are also equally as vital to the environment as other organisms, and therefore, they should be carefully investigated as part of MP research.

In a study, the annual and maximum plastic loadings in agroecosystems were estimated using available data and estimates for Europe, the United States, and Australia. According to the observational data, up to 2.5 million tons of MPs are predicted to end up in the oceans each year, with two-thirds of that amount attributable to the synthetic fibers released during washing and tire attrition when driving [8]. Besides, it is believed that approximately 95% of MPs that pass via sewage treatment plants are absorbed into biosolids. Thus, after the applications of biosolids for fertilization purposes, MPs obtain their routes to the agroecosystems (Figure 1). 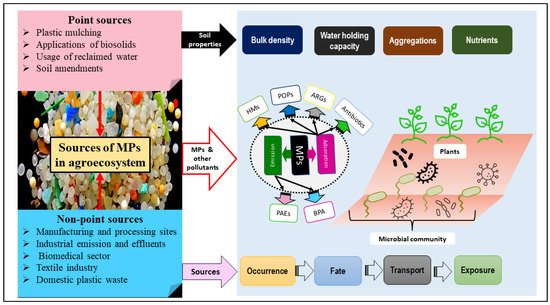 Figure 1. Representation of microplastics sources in the agroecosystems, the impacts on soil properties, and their fate; HM: heavy metal, POPs: persistent organic pollutants, ARG: antibiotics and bacterial/phage resistance genes, PAEs: phthalic acid esters, BPA: bisphenol-A.
MPs are reported to be further fragmented or weathered by solar ultraviolet radiation, as well as by increased oxygen availability and temperature. Afterward, fragmented MPs migrate vertically through the soil profile and horizontally along the surface of soils, resulting in the spread of plastic contamination over a wide range of habitats, including deep soil, groundwater, aquatic environments, etc. [9]. Besides, MPs are well-known for their long-term persistence in soils. In this context, some studies demonstrated that after burying the plastics in the forms of pro-oxidant mulching films in soil for 8.5 years and when analyzing the degradation of LDPE film in laboratory conditions for 10 years there was no degradation, because all the plastics were recovered in their original forms [10].
MPs are recorded to modify soil characteristics, such as bulk density, water-holding capacity, and soil structures. Depending on the type of MPs, the qualities of the soil are affected to varying degrees [11]. The other major concern has been raised by the omnipresence of MPs i.e., in the soil, MPs can combine with other pollutants (organic pollutants, heavy metals, antibiotics, etc.) to negatively impact their inherent organisms [12]. In addition, the interaction of MPs with organic and inorganic contaminants can alter the behavior of these contaminants, and MPs can serve as a significant conduit for the migration of these contaminants throughout the subsurface [13][14][15][16].
Thus, these modulations in soil structure caused by MPs pollution may have an impact on microbial composition and functions. MPs exposure has direct and indirect effects on the food chain, due to their ubiquity, size, source volume, chemical components, and complicated interactions with biotic and abiotic factors in the agroecosystems [17].

2.2. Mechanism of MP Uptake in Plants

MPs have been demonstrated to permeate seeds, roots, stems, leaves, fruits, and plant cells, but only to a certain extent and depending on their size and type [18]. Commonly, it is assumed that plants are unlikely to be able to absorb MPs because of their high molecular weight and large size, which prevents them from penetrating cellulose-rich plant cell walls. However, their uptake has been reported by some reports when they are broken down to their nanoforms [19][20]. Thus, nanoplastics (NPs) can find their way to enter the plant cells. Further, some engineered nanomaterials (ENMs), including metals, oxides, and carbon allotropes, have been shown to enter plants via roots and scatter in various plant tissues, implying a significant likelihood of plant uptake of NPs [19].
Likewise, in a study, after the exposure of polystyrene NPs (20 nm) to rice, a substantial distribution of PS was found in the roots’ intercellular spaces [11]. Moreover, nano-polystyrene (50 nm) was found in different compartments of the primary roots of onion after exposure for 72 h, reflecting that nano-polystyrene is capable of penetrating a variety of biological barriers and, finally, entering root cells [21]. Similarly, polystyrene-NPs (0.2 µm) were found to be absorbed by the roots of lettuce and wheat that were also recorded to be transported into shoots. Thus, due to alterations in the cellular membranes and biochemistry, the accumulating NPs had a detrimental effect on crop health [20]. Hence, to ensure safe food production, further research is needed on the interactions of MPs and NPs, as well as their fate in the agroecosystems.

Germination is a critical stage in the life cycle of plants, and it begins with the absorption of water, which includes establishing the metabolic reactions required for seed germination [22].

The influence of NPs and MPs on the growth of terrestrial plants has received less investigation. Soils with MPs-containing sludge promoted tomato plant growth while delaying and reducing fruit output. However, the authors stated that more research is needed to confirm these findings and clarify the mechanisms of MPs’ potential effects on plants [23].

Crops (plants) are vital for human survival and ecological health. However, there are several abiotic and biotic stressors, including MPs, that decrease the economic outcomes of edible plants. According to a substantial number of studies, MPs have been found to have both negative and positive effects on plants’ performances [24][25]. Further, MPs not only impact the soil properties, soil fauna, and microbes but also interfere with the metabolic activities of plants via their uptake and accumulation. In plants, the accumulation of MPs in their organs and the adherence to the surfaces of the roots or seeds has been linked with the decrement in the water and nutrient uptake [25][26].

It is demonstrated that MPs can accumulate in plants, which is directly related to altered cellular homeostasis, which eventually impacts the plant economic outcomes and raises food security concerns. The detailed scheme of the uptake and morpho-physiological implications in plants is depicted in Figure 2.

More
© Text is available under the terms and conditions of the Creative Commons Attribution (CC BY) license; additional terms may apply. By using this site, you agree to the Terms and Conditions and Privacy Policy.
Upload a video for this entry
Information
Subjects: Plant Sciences
Contributor MDPI registered users' name will be linked to their SciProfiles pages. To register with us, please refer to https://encyclopedia.pub/register :
Arpna Kumari
View Times: 175
Revisions: 2 times (View History)
Update Date: 14 Mar 2022
Table of Contents
1000/1000
Hot Most Recent