Submitted Successfully!
Thank you for your contribution! You can also upload a video entry related to this topic through the link below:
https://encyclopedia.pub/user/video_add?id=2008
Check Note
2000/2000
The Modified Phenanthridine PJ34
Edit
Upload a video
This entry is adapted from 10.3390/cancers12061628

This entry summarizes recent data disclosing the efficacy of the modified phenanthridine PJ34 in exclusive eradication of a variety of human cancer cells without impairing healthy proliferating cells. Its cytotoxic activity in cancer cells is attributed to the insertion of specific un-repairable anomalies in the structure of their mitotic spindle, leading to mitotic catastrophe cell death.

In the last twenty years the modified phenanthridine PJ34 has been known for its activity as a PARP (polyADP-ribose polymerase) inhibitor [1][2] (Figure 1). Recently, PARP inhibitors attract the attention of researchers and clinicians due to their FDA approval for cancer therapy [3][4][5][6], although some of them failed in clinical trials. Unexpectedly, it has been disclosed that PJ34 that has been originally invented to protect cells from cell death,  imposed by pathological stress conditions, such as ischemia and inflammation [7][8][9], has an exceptional cytotoxicity in human cancer cells. Its cytotoxic activity does not involve PARP inhibition, and most importantly, it does not affect healthy cells [10][11][12][13][14][15][16][17]. 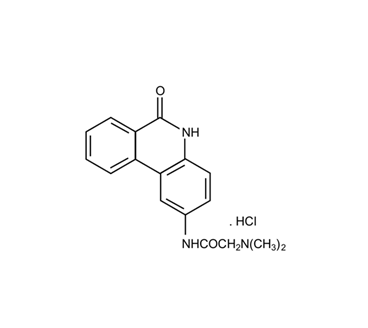 The modified phenanthridine PJ34 is a stable molecule, fairly soluble in water (22 mg/mL), and permeable in the cell membrane.  Unlike other PARP inhibitors, PJ34 exclusively eradicates a variety of human cancer cells, including cancer cells resistant to current therapy, without affecting proliferating and non-proliferating healthy cells including human epithelial, mesenchymal and endothelial cells [10][11][12], and healthy cells of mouse origin, including mouse embryonic fibroblasts (MEF), fibroblasts, neurons in the central nervous system and neuronal progenitor stem cells. Its exclusive cytotoxic activity in a variety of human cancer cells, solid and hematological malignancies and in xenografts is summarized in a recent review [18].

Incubation with PJ34 completely eradicates within 48 -96 hours a variety of human cancer cells (18). In addition, PJ34 retardes the development of human tumors in mouse xenografts, and most surprisingly, PJ34 exclusively eradicates cancer cells in developing tumors. About 90% of human pancreas ductal adenocarcinoma, PANC1 cells in tumors developed in immunocompromised mice (xenografts ) were eradicated 30 days after 14 Intravenous treatments with PJ34 (60 mg/kg). Metastases were not detected. This and other treatments with PJ34 in xenografts did not impair the weight gain of the mice nor impact their activity and development, which were monitored during the experiments. Moreover, treatments with PJ34 in combination with other anti-cancer agents enabled reducing their cytotoxic doses, and achieved efficient treatment of some resistant cancer tumors [18].

Flow cytometry measurements revealed that PJ34 exclusively arrests mitosis in human cancer cells [10][11][14]. Therefore, the possibility that PJ34 induces mitotic arrest has been tested by testing its effect on the post-translational modification of all the currently known proteins implicated in mitosis.  These proteins were screened in a group of human cancer cells versus healthy cells, in an attempt to identify different effects of PJ34 on the post-translational modifications of proteins in the cancer versus healthy cells. Changes induced by PJ34 in their post-translational modifications were measured by the shift in their isoelectric point (IP) in two-dimensional (2-D) gel electrophoresis [13]. Also, the effect of PJ34 on the isoelectric point of these proteins in the two groups of cells was compared to the effect of a potent PARP inhibitor, in order to examine possible involvement of PARP inhibition in the effect of PJ34 [13].

This analysis identified only three proteins in the tested cancer cells with isoelectric point significantly shifted by PJ34, while not affected in healthy cells [13]. These proteins included two motor proteins [19], human kinesins 14/HSET/kifC1 and kif18A, and the non-motor protein NuMA (nuclear mitotic apparatus protein) [20][21][22][23][24]. PARP inhibition did not exert any similar effect on these proteins.

HSET/kifC1 has an essential role in the spindle structure of human cancer cells [20][21][22][25][26][27][28]. Differences in the expression and function of HSET in cancer versus healthy cells have been reported [25][26][27]. HSET/kifC1 inhibition or silencing causes small aberrant spindles in human malignant cells [26].

The kinesin Kif18A is implicated in microtubules de-polymerization, necessary for the binding of the duplicated chromosomes to kinetochores in the spindle mid-zone [23].

A post-translational modification of NuMA by either polyADP-ribosylation or phosphorylation promotes the binding of NuMA to proteins [31][32][33][34][35][36]. NuMA is phosphorylated by serine-threonine kinase pim1, and NuMA phosphorylation by serine threonine kinases at a specific site in the protein is crucial for its ability to bind proteins [31][32]. Similarly, polyADP-ribosylation of NuMA by tankyrase1 in cancer cells promotes the ability of NuMA to bind other proteins [33].

Pim kinases and tankyrase1 are both inhibited by PJ34 at the same concentrations range of PJ34 that causes cell death in human cancer cells (measured IC50 = 3.7 μM for pim1 inhibition by PJ34, and IC50 = 1 μM for tankyrase1 inhibition by PJ34) [34][35][36][37]. Furthermore, tankyrase1 and pim kinases are hardly expressed in healthy somatic cells, while highly expressed in human cancer cells [36][37].

Thus, blocking the post translational modification of  kinesines HSET and kif18A and the post translational modification of NuMA can also prevent the construction of spindles   in cancer cells by HSET, and the construction of stable spindle poles by NuMA clustering and the tethering of microtubules in the spindle poles. of chromosomes in the mid-zone  to the kinetochores ([18], Figure 2). 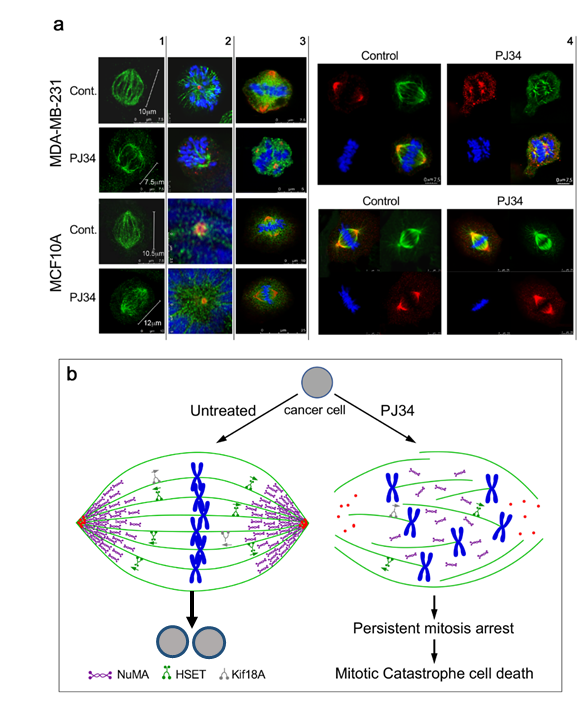 The unstable structure of the spindle poles preventing chromosomes arrangement in the midzone  activates the spindle assembly control (SAC) proteins, which leads to mitosis arrest followed by mitotic catastrophe cell death when the structural anomaly is not amended [38][39][40][41]. This is exactly the phenomenon observed by confocal imaging in a variety of human cancer cells treated with PJ34 [13]. De-clustering of centrosomes observed in multi-centrosomal cancer cells treated with PJ34 could result from the un-stable aberrant spindle poles [13]. Thus, by preventing the post translation modification of HSET, kif18A and NuMA in human cancer cells, specific anomalies in their mitotic spindle structure are inserted ([13] and Figure 2). These results are in consistence with previous findings [42][43].

The potency of PJ34 to exclusively eradicate human cancer cells without impairing healthy cells can be attributed to the anomalies exclusively inserted in the structure of the mitotic spindle of human cancer cells, which arrest mitosis and kills cancer cell in the pre-anaphase stage by mitotic catastrophe cell death. Therefore, the more frequently cancer cells enter mitosis, the more efficiently they are eradicated. Thus, despite the permeability of PJ34 in the cell membrane, and despite its rapid distribution in the animal’s tissues, treatment with PJ34 did not impair healthy tissues in the tested animals, nor their development and weight-gain.

In conclusion, the modified phenanthridine PJ34, which has been invented for PARP inhibition, efficiently eradicates a variety of human cancer cells by mitotic catastrophe cell death caused by faults in their mitotic spindle.

On the basis of these findings, we hope that cell death evoked by structural faults in the mitotic spindle of human cancer cells will pave the way to a new concept in cancer therapy.

More
© Text is available under the terms and conditions of the Creative Commons Attribution (CC BY) license; additional terms may apply. By using this site, you agree to the Terms and Conditions and Privacy Policy.
Upload a video for this entry
Information
Subjects: Oncology
Contributor MDPI registered users' name will be linked to their SciProfiles pages. To register with us, please refer to https://encyclopedia.pub/register :
Malka Cohen-Armon
View Times: 466
Revisions: 5 times (View History)
Update Time: 19 Sep 2020
Table of Contents
1000/1000
Hot Most Recent