+1 point
Thank you for your contribution! You can also upload a video entry related to this topic through the link below: https://encyclopedia.pub/user/video_add?id=19595
Check Note
2000/2000
Indigo for Non-Toxic and Ecological Gliding Surfaces

The biogenic substance E-indigo can form supramolecular, hydrophobic structures using self-organization. These structures show a low coefficient of friction as a gliding layer against polar surfaces. The formation of primary particles with platelet morphology based on hydrogen-bonded E-indigo molecules is ideal to produce the gliding layer. Structures with excellent gliding properties on ice, snow, and water can be achieved by means of directed friction and high pressure, as well as through tempering. The resulting hard, thin gliding layer of E-indigo does not easily absorb dirt and, thus, prevents a rapid increase in friction. Field tests on snow, with cross-country skis, have shown promising results in comparison to fluorinated and non-fluorinated waxes. Based on quantitative structure–activity relationship (QSAR) data for E-indigo, and its isomers and tautomers, it has been demonstrated that both the application and abrasion of the thin indigo layers are harmless to health, and are ecologically benign and, therefore, sustainable.

E-indigo is particularly stable as a supramolecular cluster with intermolecular hydrogen bonds. Solid lubricants, such as graphite or molybdenum disulfide, reduce friction due to the sheets being able to slide easily on each other. In these crystal structures, the atoms lying in the same sheet are covalently bonded, whereas comparatively weak interactions occur between the stacked sheets. Although a large number of studies on molybdenum disulfide have been published, quite a few parameters of this lubricant are not well understood.[1][2] Despite its seemingly significant surface charges and relatively strong van der Waals forces, molybdenum disulfide nanosheets form a hydrophobic and low-friction surface.[3] Indigo does not belong to this class of lubricants, i.e., indigo does not glide on indigo. Supramolecular layers of E-indigo show a high stability, which is due to the π-conjugation in the molecule, as well as to intra- and intermolecular hydrogen bonds. The delocalized electrons of indigo lead to a copper-colored metallic luster (Figure 1). The delocalization of the electrons forms the basis for applications of indigo layers as semiconductors.[4][5] On liquid surfaces, supramolecular indigo clusters are formed by self-assembly, which only emerge as layers through friction.

Figure 1. (A): indigo layer formed upon filtration. (B): pure E-indigo on a friction felt. The metallic luster observed on both photographic images indicates that larger indigo structures have formed by self-assembly from suspension or by friction, respectively.[6]
Unlike the paraffins in a gliding layer, the indigo molecules are connected by hydrogen bonds, thus reducing the loss due to abrasion. This is not only important for prolonged use, but also beneficial in terms of leading to a negligible release into the environment. Long multimolecular clusters of E-indigo are ideal for the formation of stable layers, and can only be achieved if the interfering indigo isomers are reduced to minimal levels. Individual multimolecular indigo platelets can form layers on top of each other, connected by π–π stacking.[7]
On a surface where the electrons of the bonds between the atoms are hardly accessible, e.g., fluorinated surfaces,[8] water molecules only bind weakly. Such surfaces are strongly hydrophobic due to the extreme electronegativity of fluorine. Comparable electric fields can hardly be achieved without fluorine. The strong binding of electrons in aromatic systems, however, points in the same direction, though more weakly. For this reason, E-indigo has poorer gliding properties on water, but better gliding properties on ice and cold snow. The formation of indigo nanoplatelets (Figure 2) is ideal to produce gliding layers. The toxicology of these nanoparticles is insignificant, because once released, the hydrogen bonds are cleaved, and enzymatic degradation starts from the polar end groups.[9] 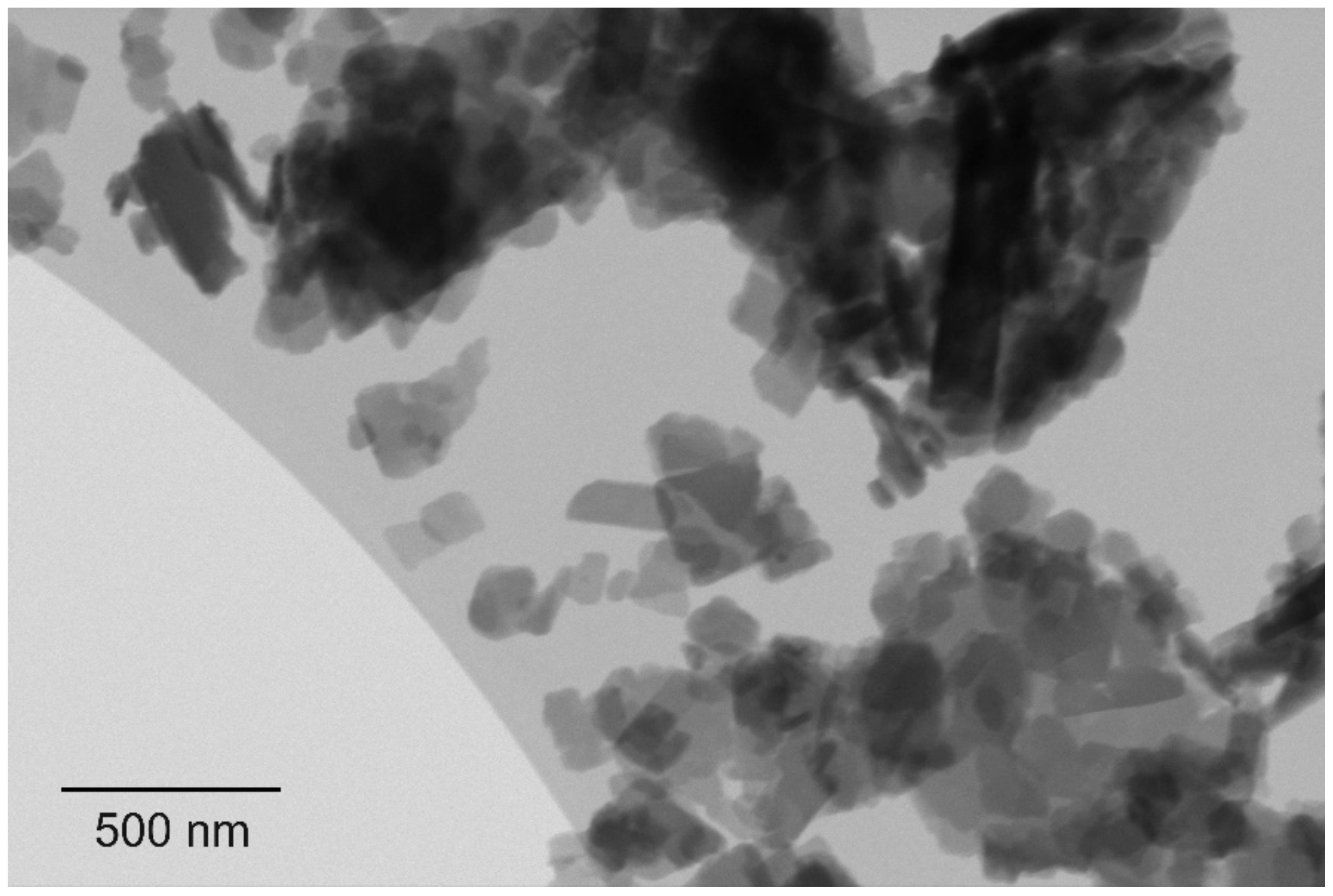 When investigating regelation, i.e., the phenomenon of ice melting under pressure and refreezing when the pressure is relieved, Michael Faraday suggested, in 1859, that there may be a thin liquid-like layer of nascent ice on the surface.[10] It has often been hypothesized that in skating or skiing, the surfaces are lubricated by a layer of water formed by pressure melting, as proven by experiments.[11] Above approximately −16 °C, a tribo-water film is formed by friction on ice and snow,[12][13][14] upon which winter sports equipment, such as skates, sleds, skis, or snowboards, glide. Below this temperature, wet friction changes to dry friction, with higher coefficients of friction. The structure, hardness, density, and moisture content of the gliding surface are determined according to the weather, and locally by small-scale influences. It is, therefore, practically impossible to find an optimum gliding surface for all the different conditions, and, moreover, for different loads and speeds.[15]
The structures and roughness of the ski base are adapted to the ice and snow properties to minimize gliding friction, e.g., by stone grinding or steel scraping.[16] Effective hydrophobic layers on such surfaces should be thin, in order to not fully cover the structures of the base and, at the same time, exhibit a sufficient hardness to avoid quick abrasion. Additives are required in conventional paraffin waxes in order to increase the hardness and improve the abrasion resistance. In many of the demanding, changing conditions in professional sports, a pure E-indigo layer, as a hydrophobic, thin, hard, solid gliding layer, improves glide, minimizes the uptake of dirt, and reduces abrasion on ice, snow, and water. The adhesion of E-indigo to metal and polyethylene surfaces is superior to paraffin, to the extent that it can be employed as a “primer”. This allows the application of soft waxes for high initial speeds. After abrasion of the soft wax layer, the remaining indigo layer still provides small friction values for the remaining distance.
To form a gliding surface, the entire base surface should be continuously covered with indigo platelets. The self-acting formation of smooth, hydrophobic layers is a condition for low-friction gliding on ice, snow, and water. Alignment of the platelets in the gliding direction decreases the gliding friction. The supramolecular indigo structures can be achieved through self-assembly on the surface of polar liquids, with directed friction and high pressure on the indigo particles (agglomerates), as well as through tempering. The surface structures shown in Figure 3 indicate a smooth coverage with E-indigo when the primary particles have not yet been exposed by tempering, brushing, or polishing.

Figure 3. Scanning electron microscopy images showing the roughened surface of the ultra-high-molecular-weight polyethylene (UHMWPE) base before (A) and after coating with E-indigo (B). The scale bar is 100 µm (52° tilt view).[17]
Figure 4 shows the promising results of recent field tests, and compares the performance of E-indigo to a high fluor wax and several commercially available non-fluorinated products. The scatter bars show how widely spread the professional field measurements are. They also give clear indications of the value of the individual tests, which can, at best, reflect the local situation and a narrowly defined weather situation over time. 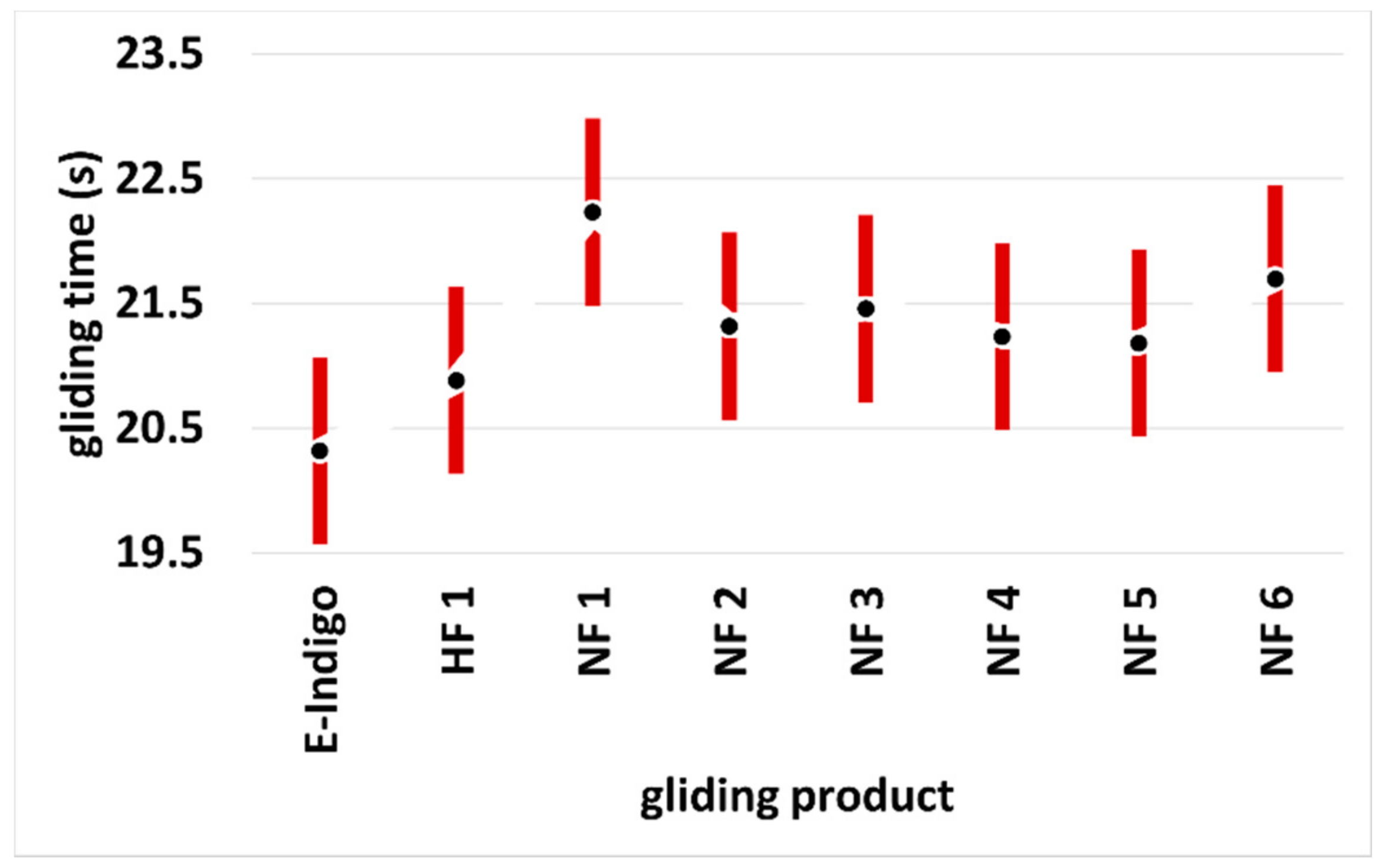 The preconditions for good indigo glide coatings are high purity (E-indigo), small particle sizes, and sufficient friction to form the self-assembled, supramolecular, thin, hard, and hydrophobic structures. E-indigo is suitable as a supramolecular gliding surface with low gliding friction on ice, snow, and water, and is ecologically compatible as a biogenic material. Experimental and QSAR estimated data show no hazard to human health, thus opening the possibility of new applications in tribology.

More
© Text is available under the terms and conditions of the Creative Commons Attribution (CC BY) license; additional terms may apply. By using this site, you agree to the Terms and Conditions and Privacy Policy.
Upload a video for this entry
Information
Subjects: Materials Science, Coatings & Films
Contributor MDPI registered users' name will be linked to their SciProfiles pages. To register with us, please refer to https://encyclopedia.pub/register :
Dominik Brühwiler
View Times: 304
Revisions: 3 times (View History)
Update Date: 21 Feb 2022
Table of Contents
1000/1000
Hot Most Recent