Submitted Successfully!
Thank you for your contribution! You can also upload a video entry related to this topic through the link below:
https://encyclopedia.pub/user/video_add?id=1958
Check Note
2000/2000
Melanin regulation peptides
Edit
Upload a video
This entry is adapted from 10.3390/biomedicines8090322

Certain analogs of α-melanocyte stimulating hormone (MSH) and peptides with the sequences derived from the hormone were shown to promote or suppress melanin synthesis in cells and in vivo models. Various amino acids, peptides, their analogs, and their hybrid compounds with other chemical moieties were shown to inhibit tyrosinase (TYR) catalytic activity or downregulate TYR gene expression. Certain peptides were shown to inhibit melanosome biogenesis or induce autophagy, leading to decreased pigmentation. In vivo and clinical evidence are available for some compounds, including [Nle4-D-Phe7]-α-MSH, glutathione disulfide, and glycinamide hydrochloride.

Melanin plays an important role in the appearance of skin color, protection against ultraviolet (UV) radiation, and maintenance of homeostasis in many organs [1][2]. Both over- and underproduction of melanin are a major research theme in cosmetology and dermatology, not only from the aesthetic viewpoint pursuing a harmonious skin tone, but also from a medical viewpoint preventing and treating various skin diseases [3][4][5][6][7].

As numerous amino acids and peptides directly and indirectly participate in the melanin synthesis process, it is reasonably assumed that the process could be artificially regulated by certain structurally related compounds. This review will introduce recent advances in the artificial regulation of skin pigmentation using amino acids, peptides, and their analogs.

2. Targets for the control of skin pigmentation

The most-studied molecular targets are the receptors on the surface of melanocytes which transmit intracellular signals, and the enzymes and proteins within melanocytes involved in melanin synthesis, and melanosome biogenesis and autophagy in melanocytes (Figure 1). 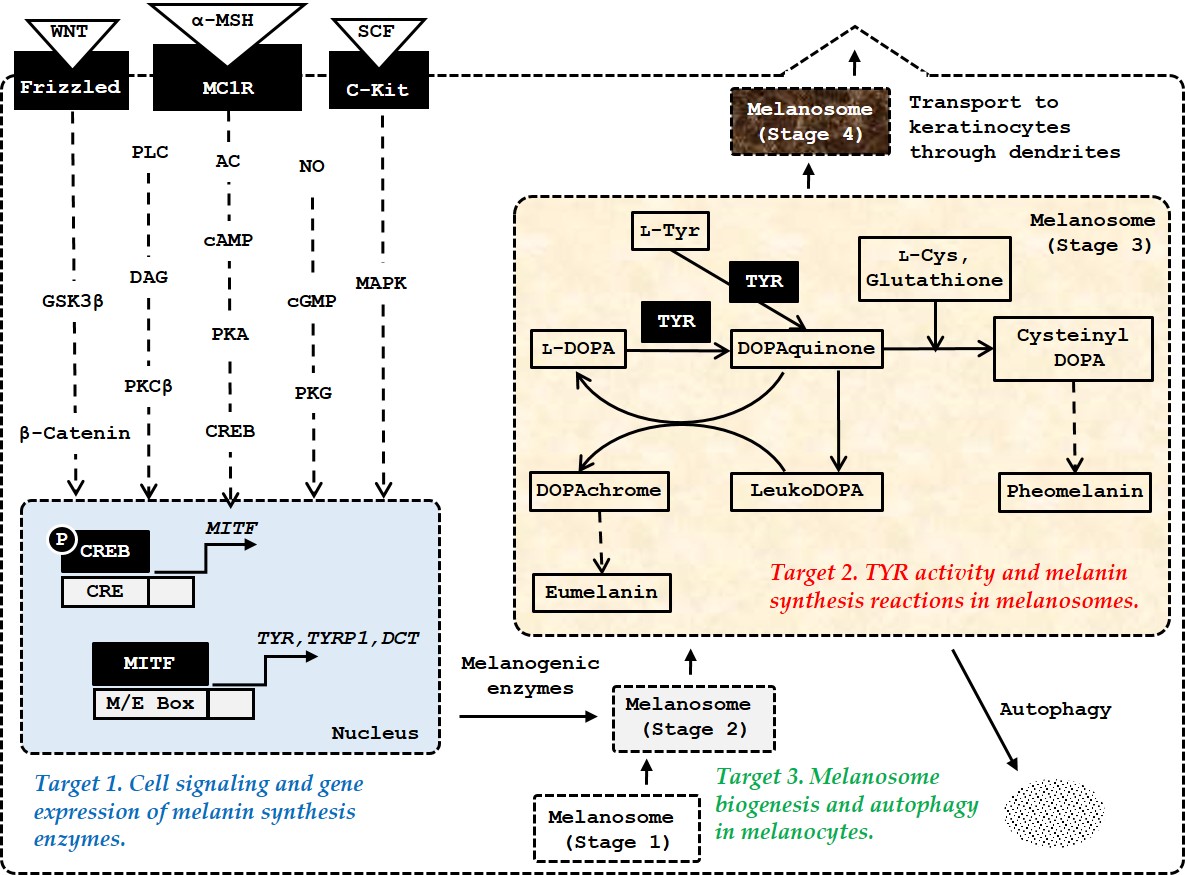 In this chapter, we discuss promotion of melanin synthesis by α-MSH analogs and oligopeptides derived from the hormone sequence, L-Tyr and L-DOPA, and other peptide hormones. Selected studies are listed in Table 1.

Various amino acids and peptides are known to inhibit TYR activity and/or cellular melanin synthesis, and some of them show depigmenting effects in human skin (Table 2).

Some amino acids and peptides have been hybridized with other antimelanogenic compounds, such as kojic acid, protocatechuic acid, α-resocylic acid, gentisic acid, gallic acid, caffeic acid, para-coumaric acid, and ascorbic acid to improve their activity, stability, or bioavailability (Table 4).

Some peptides are known to downregulate TYR expression by acting as a MC1R antagonist or by other mechanisms (Table 5).

Table 5. Peptides that reduce TYR gene expression or its protein level in melanocytes.

4.5. Peptides That Inhibit Melanosome Biogenesis or Induce Autophagy in Melanocytes

A few peptides are known to display antimelanogenic effects in melanocytes through modulation of melanosome biogenesis and autophagy (Table 6).

The sequences of endogenous melanocortin hormones derived from the POMC gene product and numerous synthetic oligopeptides that showed melanogenic or antimelanogenic activity are shown in Figure 2.

A variety of peptides and amino acid analogs were described to modulate melanin synthesis in cells, although their therapeutic utility remains to be further verified. In vivo and clinical results have been provided for MC1R targeting molecules, such as [Nle4-D-Phe7]-α-MSH [49][50], and glycinamide hydrochloride [46], and an inhibitor of melanin synthetic reaction, such as oxidized glutathione [26]. These studies suggest that certain amino acids, peptides, and their analogs may be a promising drug candidate for up- and downregulating skin pigmentation. Melanin increasing molecules can be used to alleviate photosensitive skin, to prevent photocarcinogenesis, and to treat vitiligo vulgaris [49][50][51]. Conversely, melanin decreasing molecules can be used to treat various types of hyperpigmentation for medical and aesthetic purposes [26][46][52][53].

More
© Text is available under the terms and conditions of the Creative Commons Attribution (CC BY) license; additional terms may apply. By using this site, you agree to the Terms and Conditions and Privacy Policy.
Upload a video for this entry
Information
Subjects: Physiology
Contributor MDPI registered users' name will be linked to their SciProfiles pages. To register with us, please refer to https://encyclopedia.pub/register :
Yong Chool Boo
View Times: 875
Revisions: 17 times (View History)
Update Time: 28 Sep 2021
Table of Contents
1000/1000
Hot Most Recent