Submitted Successfully!
Thank you for your contribution! You can also upload a video entry related to this topic through the link below:
https://encyclopedia.pub/user/video_add?id=19156
Check Note
2000/2000
Blade for Offshore Floating Wind Turbine Model
Edit
Upload a video
This entry is adapted from 10.3390/jmse10020132

The Froude-scaled offshore floating wind turbine model is inevitably affected by the Reynolds number effect, making the model unable to correctly reproduce the thrust performance of the reference wind turbine (RWT). To solve this problem, an Xfoil-AirfoilPrep-Matlab (XAM) system and a wide tip speed ratio search method (WTSM) are proposed to design a wide tip speed ratio (TSR) thrust-match model blade. The XAM system is utilized to select the best airfoil for WTSM by calculating the lift and drag coefficients of several airfoils. The WTSM is utilized to optimize the blade chord and twist. It formalizes the blade chord and twist by polynomials and then optimizes the polynomial coefficients. The thrust coefficients construct the optimization object at different TSRs. For validating the effect of the redesigned blade, the thrust performance is compared to that of the RWT blade. In addition, the thrust performance of redesigned blade at different pitch angles is also calculated and compared to those of the RWT blade. Results show that the thrust performance of redesigned blade matches well with that of the RWT blade at 0 pitch angle, and it can also match the variations of that of the RWT blade at the other pitch angles well.

With the development of the offshore floating wind turbine (OFWT) technique, the capacity and geometry of OFWTs are rapidly increasing [1][2][3][4][5]. The increases promote the need for the OFWT design cost reduction approach [6]. In this scenario, the scaled model method is the most commonly used one [7][8]. It works by constructing a model to validate the static and dynamic characteristics of OFWT. However, due to the Reynolds number effect (RNE), the Froude-scaled OFWT model cannot correctly reproduce the aerodynamic performance of the reference wind turbine (RWT) [9][10][11][12], especially the thrust performance.
To solve this problem, the redesigning blade method is proposed and widely studied [13]. It reproduces the thrust performance of the RWT blade by designing a dedicated blade. The design includes two steps. The first step is choosing a thin airfoil to replace the original airfoils used in the RWT blade. The second step is adjusting the blade geometry, which is mainly described by the blade chord and twist, by manual or optimization algorithm to obtain a redesigned blade matching the RWT blade in thrust performance.

The OFWT model is commonly designed to satisfy the geometry, kinematics and dynamics similarity [14]. To reach these goals, the scaling factors of different properties should be fully considered.

To accurately study the influence of RNE on the performance of airfoils, the DU40 airfoil is taken as the example to compare the lift and drag coefficients (CL and CD) of airfoils at the reference and model Reynolds numbers. The results are shown in Figure 1, and α is the angle of attack. It shows that there are several significant changes in airfoil performance resulting from RNE. The CL significantly decreases, and the CD slightly increases. It means the peak CL/CD also decreases significantly. As the Blade Element Momentum (BEM) points that, the CT of blade sections is mainly influenced by the peak CL of airfoil, the valley CD and the peak CL/CD of airfoil [15][16]. Thus, to design a thrust match blade, airfoils with larger peak CL, smaller valley CD and larger CL/CD are needed first.

Figure 1. The aerodynamic performance of DU40 airfoil at the reference and model Reynolds numbers. (a) The lift coefficient. (b) The drag coefficient.

To find the required airfoils, the CL and CD of several airfoils should be calculated and compared with each other. Based on this goal, a XAM system, which integrates Xfoil [17], AirfoilPrep [18] and Matlab software, is proposed. This system can fulfill the calculation of the CL and CD of several airfoils at the full 360-degree angle of attack, the extraction of the critical data and the comparison of the aerodynamic performance of airfoils.
The flowchart of the XAM system is shown in Figure 2. Firstly, the studied airfoil number, airfoil geometries and Re are read. Secondly, a bat file is written based on airfoil geometries and used to drive the Xfoil. Thirdly, the CL and CD at a small range of α are processed to the full 360-degree CL and CD data by AirfoilPrep. Fourthly, the preliminary screening conditions are determined according to the maximum peak CL, the minimum valley CD and the maximum peak CL/CD of airfoils. Then, several airfoils are selected based on the preliminary screening conditions. Afterward, the scores of the selected airfoils are calculated by a dedicated score method. Finally, the CL and CD of the airfoil with the highest score are output. 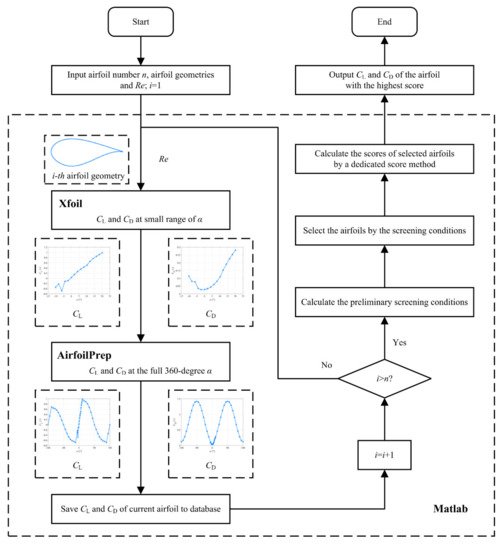 Figure 2. The flow-chart of XAM system.

3.2. Result and Discussion of Airfoil Performance

The geometry and aerodynamic performance of AG 14 airfoil at the model Reynolds number are shown in Figure 3 and Figure 4, respectively.

Figure 3. The geometry of AG 14 airfoil.

Figure 4. The aerodynamic performance of AG 14 airfoil at the model Reynolds number. (a) The lift coefficient. (b) The drag coefficient.

The rated thrust coefficient is usually taken as the optimization object of redesigning the blade in the previous studies. However, it cannot promise the thrust performance of the OFWT model matching the RWT blade under other working conditions. This will lead to deviations in research related to unsteady inflow wind, wake and control strategy. To solve this problem, a WTSM is proposed to design a wide TSR thrust-match blade. The WTSM reaches this goal by taking the thrust coefficients at multi-TSR as the optimization object in the design process. The flowchart of WTSM is shown in Figure 5. First is fitting the blade chord and twist of the RWT blade to a quaternary polynomial and a quadratic polynomial, respectively. Second is clarifying the constraints of blade chord and twist. Then, selecting an appropriate alternative airfoil through the XAM system (AG 14 airfoil). Afterward, the blade chord and twist polynomial coefficients are taken as the design variables to search for the result with a minimum target value. Finally, the blade chord and twist are output. 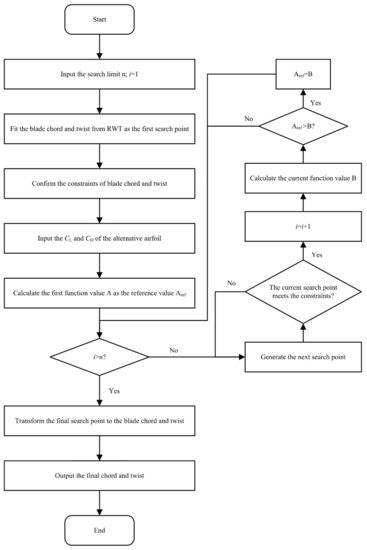 Figure 5. The flow-chart of WTSM.

In this entry, the population of grasshopper optimization algorithm (GOA) is set as 4000, and the iteration is set as 10. The blade chord and twist results are compared with the RWT blade in Figure 6. It shows that the redesigned blade has an increase in chord and a decrease in twist. The increased blade chord can catch more wind power and slightly increase the Reynolds number. The decreased twist will lead the airfoil, which has poor performance due to the RNE, to operate at a better angle of attack. Similar findings can be found in other studies [19][20]. In addition, the smoothness of the chord and twist curve also prove the advantage of using the polynomial coefficients as the design variable.

This entry proposes a XAM system to select the best airfoil for redesigning the blade first. Then a WTSM based on GOA is put forward to optimize the blade chord and twist of the redesigned blade. The main findings are summarized as follows:

More
© Text is available under the terms and conditions of the Creative Commons Attribution (CC BY) license; additional terms may apply. By using this site, you agree to the Terms and Conditions and Privacy Policy.
Upload a video for this entry
Information
Subjects: Engineering, Marine
Contributor MDPI registered users' name will be linked to their SciProfiles pages. To register with us, please refer to https://encyclopedia.pub/register :
Jiahuan Lin
View Times: 114
Revisions: 2 times (View History)
Update Time: 08 Feb 2022
Table of Contents
1000/1000
Hot Most Recent