Submitted Successfully!
Thank you for your contribution! You can also upload a video entry related to this topic through the link below:
https://encyclopedia.pub/user/video_add?id=19032
Check Note
2000/2000
Beach Drainage System
Edit
Upload a video
This entry is adapted from 10.3390/jmse10020145

The idea that the groundwater table plays a role in the mobilization of the sediment grains underlies the application of the beach drainage system (BDS) as a tool able to modify the natural dynamics of groundwater table at sandy beaches. The beach drainage is one of the soft engineering methods aimed to counteract the shoreline retreat related to the sediment redistribution along the beach profile.

Whatever the reason, economical, environmental, or social, the erosion process represents a big issue for coastal areas. It can be defined as the permanent tendency of shoreline regression landward, as a result of a disequilibrium of the natural beach dynamics leading to sediment losses. The reasons behind that disequilibrium comprise several factors, both natural and anthropogenic, direct or not, as a result of men-driven environmental changes. Bird [1] gave a list of possible causes. They basically can be grouped into a bunch of general ones:
The latter, together with a deficiency in sand supply, may cause a deficit in the sediment budget balance over a period of time in the order of years: in a given area it may cause a long-term regression of the shoreline if the incoming sediment transport rate is lower than the leaving one. The shoreline dynamics must be considered also in view of the current beach erosion that could be exacerbated by future possible climate change scenarios (i.e., sea-level rise). Therefore, without interventions aimed to stabilize the shoreline position, an increase of coastal vulnerability (hence coastal risk) may happen [2][3]. Even if it is sometimes defined as “acute erosion” [4], the shoreline retreat is often temporary. It is related to cross-shore transport in the surf zone driven by waves and undertow currents, in a storm-related temporal scale (i.e., the same temporal scale as storm surge occurrence [5][6]). To counteract coastal erosion, though, the strategies are not as conspicuous as one can think [7]. One option is abandoning eroded coastal areas and moving landward, letting the natural equilibrium re-build itself. This solution in some cases could be the only option left, even though it is not easily achievable considering the social-economic stresses that affect directly the people [8] and their risk perception [9].
Another alternative is to stabilize the beach by influencing nearshore phenomena. If the protections are artificially built, they are referred to as “hard structures”, such as groins, seawalls [10][11][12] or breakwaters [13][14][15][16]. They alter the hydrodynamic regime which in turn modifies the morphodynamics response of the beach or they directly interfere with sediment transport rate.
On the other hand, it is possible to gain shore protection by emulating the dune system as much as possible, and by nourishing the beach system, adding it back into the littoral system. In general, these methods are referred to as “soft-engineering”, “non-structural” or “quasi-natural” [17] methods. Hard structures may promote migration of the eroding process to adjacent areas, whilst soft solutions often are long-term unsustainable [18] due to maintenance issues: the choice and the design of one or another have to be adopted having a deep understanding of the causes of the erosion itself [7]. Indeed, in the soft-methods group, it has to be distinguished also the “nature-based solutions” (NBS), properly defined as those that mimic the characteristics of the natural habitat. They are created by human design, engineering, and construction to provide specific services such as coastal risk reduction [19]. NBS, which include for instance salt marsh, oyster reefs, mussel beds, vegetated foreshores, are increasingly being studied and implemented due to their capacity for coastal adaptation and protection and for their capacity to maintain the ecosystem healthy and resilient [20][21][22]. Many NBS designs require a holistic consideration of different fields, ranging from biology, chemistry, and engineering then their implementation is still predominantly case-specific [23][24]. On the other hand, beach nourishments as a well-established non-structural method are often viewed as a valid option. Indeed, they provide a series of benefits, ranging from the restoration buffer to extreme storms, to the increase of recreational attractiveness [25], to the avoided lack of sand on the adjacent beaches. Their temporary nature (i.e., they do not solve the cause of erosion itself [26], rather supply for a local sand deficiency) can be enhanced by the “hybrid” or “mixed” deployment of solutions [2], whose main goal is to retain the added sand by increasing the lifetime of nourishment projects. The environmental sustainability of beach nourishment can be maintained by the adoption of low-impact solutions, both structural (i.e., low-crested submerged breakwaters) and non-structural. Among the “soft” ones, it is possible to name the artificial manipulation of beach groundwater [27]. It has assumed several names, such as “beach dewatering”, “beach management system” (patented by [28]), “Pressure Equalizing Modules” (PEM, patented by [29]), or generally “beach dewatering system”. Hereinafter it is referred to as “Beach Drainage System” (BDS). It relies on the idea that groundwater level in the non-cohesive sandy porous medium, influenced by the seaward oscillations due to the waves (short or long), can, in turn, influence the sediment particle mobilization in the swash zone, according to the difference of the free surface elevation inside and outside the sand. Hence, the system consists of a series of drains placed in the beach, vertically (PEM) or horizontally (BDS) in the inter-tidal zone, that are expected to lower the groundwater table in order to achieve a “drier” beach, that in turn discourages the fluidization of the particles.
So far, the efficiency of BDS is not fully recognized, even though its history dates back for decades and it has been tested in several places in the world, both in the laboratory and in the field (Figure 1). 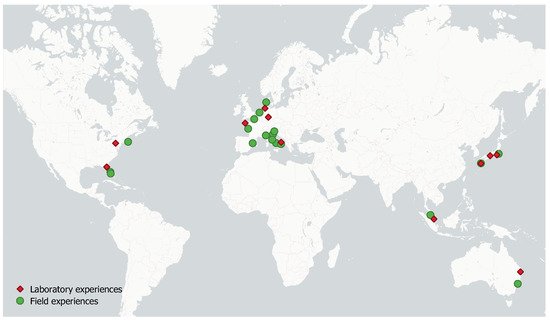 Figure 1. Maps of the field and laboratory experiences around the world.
At the end of the nineties of the last century, Turner and Leatherman [27] provided a very comprehensive up-to-date review of the installed and experimental dewatering systems. At the end of the review, they highlighted that some open questions remained and regarded BDS as an experimental rather than a proven solution to erosion management. Negative feedback to stop erosion was given by Bruun for the drained beach [30], since the drainage does have only a temporary effect and works eventually in mild wave conditions. He concluded the paper admonishing not to use it as a substitute for nourishment, also due to its decreasing performance in time. On the other hand, other studies claim the very effective performance on accreting beaches and quickly recovering after a storm (e.g., [31][32]). Another example of a review paper about the soft-coastal methods was given in 2013 by Mariani et al. [33]. The authors concentrate on both dewatering systems and artificial reefs and updated the state of the art of the BDS.
Among the pros of BDS can be mentioned the lack of visual impact, the simplicity of deployment and removability [34], and the relatively low-cost [35][36]. Nonetheless, the feedback on its performance is sometimes conflicting and dependent on the site-installation conditions. As other “alternative” shoreline retreatment control devices, the claims of the positive benefits of these tools are often characterized by a controversial assessment of their performances [37].

The water table is defined as the surface where the pore pressure is atmospheric. Above the free surface, a layer of unsaturated medium is present: the pores between the solid grains are not full of water, but it results to be a three-phase area: liquid (water), solid (grains), and gas (air). The mathematical modeling of the groundwater motion in an unconfined aquifer (i.e., a flow whose upper boundary is represented by a water table) follows the classical approach of the continuum medium for irrotational flow. The simplest approach for the unconfined unsteady flow (since the presence of the time-dependent forcing) is the one-dimensional linearized Boussinesq equation [82], i.e. the combination of Darcy’s law and the mass conservation equation, considering the Dupuit’s assumption [83], which assumes equipotential lines as vertical and streamlines as horizontal and hence a hydrostatic pressure distribution.

Even if the first approach on modeling the groundwater dynamics at the coast is analytical [84][85][86][87][88][89], only Fischione et al. [90], according to the best authors knowledge, engaged to analytically model a beach drained by BDS. They solved the classical Boussinesq equation [91] in an idealized finite-length rectangular domain with a simplified boundary condition to take into account the presence of the drain: a constant groundwater level has been imposed at the shoreward boundary, at a certain distance from the shoreline (i.e. the seaward boundary), where the effect of the waves has been modeled as a periodic function of the water table.
On the other hand, groundwater dynamics has been widely investigated by means of numerical modeling. Dominick et al. [92] were among the first ones that tried to numerically predict water table fluctuation due to waves by an implicit finite-difference solution. The groundwater response to tide-induced oscillations has been taken into account in their studies by [93][94][95]. The “BeachWin” model [96] links beach groundwater and swash, simulating interacting wave motion, beach groundwater flow, and sediment transport in the swash zone. The model uses simplified descriptions of the various processes and does not consider either the effect of vertical flow in porous media on the sediment immersed weight or the increase and decrease of the boundary layer. The model has been validated by Ang et al. [97] for controlled boundary conditions against the experimental results, with no satisfactory results. The numerical work of Li et al. [98] is worth to be mentioned when the numerical modeling of dewatering systems is concerned. They included the drainage effects for the macro-tidal beach, modifying the model presented in [99]. Two different types of dewatering systems were investigated: artificial and gravity drained beaches. In the first place, the original model by [99] included a modified kinematic boundary condition for the water table, which takes into account the capillarity effects as well. The new kinematic boundary condition was incorporated into a boundary element method model. Karambas and Ioannidis [100] modified the numerical model proposed by Karambas [101] in order to take into account the effect of the draining system. They coupled the Boussinesq type model for the propagation of the waves in the near field with a porous flow model capable to account for sediment transport. Vesterby et al. [69] coupled the commercial model powered by Danish Hydraulic Institute MIKE SHE (for groundwater dynamics) and MIKE 11 (for sea-level fluctuations and wave run-ups) and applied them to the real case of Les Sables d’Olonne [71]. Saponieri and Damiani [102][103] solved Richard’s equation by means of HYDRUS-2D code [104] to simulate the GWK prototype-scale experiments [52]. They tested the model for the static case (i.e., with no waves) in order to check the capability of the model to catch the draining capabilities of the BDS, and eventually use it to optimize the position of the drain according to its best performances. Against the groundwater-coastal hydrodynamic coupling, the approach used by [105][106] resorts to the power of the Computational Fluid Dynamics to model a fine porous medium in presence of wave-forced groundwater table, in presence of a drained beach. The OpenFOAM® library has been used to solve the Volume-Averaged Reynolds Averaged Navier–Stokes equation [107]. In [105], different drain diameters have been compared in terms of groundwater table and discharge, while [106] modeled three-dimensional small-scale numerical tests for different draining patterns and sand permeability. The dynamic inside the pipe has been studied and analyzed, to gain insight into its hydraulic regime and eventually to define appropriate configurations to prevent the pipe from pressurizing.

More
© Text is available under the terms and conditions of the Creative Commons Attribution (CC BY) license; additional terms may apply. By using this site, you agree to the Terms and Conditions and Privacy Policy.
Upload a video for this entry
Information
Subjects: Engineering, Marine
Contributors MDPI registered users' name will be linked to their SciProfiles pages. To register with us, please refer to https://encyclopedia.pub/register :
Piera Fischione
,
Marcello Di Risio
View Times: 126
Entry Collection: Environmental Sciences
Revisions: 3 times (View History)
Update Time: 08 Feb 2022
Table of Contents
1000/1000
Hot Most Recent