Submitted Successfully!
Thank you for your contribution! You can also upload a video entry related to this topic through the link below:
https://encyclopedia.pub/user/video_add?id=1860
Check Note
2000/2000
NMR in Milk Protein Structure
Edit
Upload a video
This entry is adapted from 10.3390/foods9081128

Milk proteins have a complex structure which changes as a result of applied treatment. The newly developed structural conformations of proteins exert influence on the quality of the final product. Structural characterization of milk proteins was successfully performed using NMR. This predominately refers to complete structural assignment on whey proteins and elucidation of sequential fragments of caseins.

As a non destructive method, NMR is a powerful tool which observe the nuclei of atoms immersed in large magnetic field producing radio sensitive signal. The produced signal gives information of the spatial orientation of the molecules and thus tertiary structure of proteins.

Milk is a biological fluid secreted by the mammary gland with the primary function to complete the nutritional requirements of neonates. In the dairy industry, milk is processed for maintaining safety and extending the shelf-life but is also further processed for production of different dairy products and ingredients. Milk proteins play an essential part in obtaining high quality products when appropriate processes are applied. The structures of milk proteins often undergo transformations during manufacturing processes, which may influence the quality of the final product [1]. The distribution of the amino acids in the polypeptide chain in the protein molecule is of great importance to their conformational arrangements and consequent functionality during dairy processing.

The proteins in milk are classified in two main groups, i.e., the whey proteins and the caseins and these groups are likely the most studied food proteins to date. The major whey proteins in milk are α-lactalbumin (α-LA) and β-lactoglobulin (β-LG) and considering their nutritional importance, molecular size (relatively small globular proteins) and heat sensitivity, they have been frequently studied for structural elucidation and changes therein [1][2][3][4][5]. The caseins occur mainly in the form of casein micelles and their complex structure has been intriguing dairy scientists for decades. The structure of the micelles consists of four casein types, i.e., αs1-, αs2- and β-casein located primarily in the interior and κ-casein located on the exterior of the micelles. The primary role of κ-casein is the stabilization of the micelles against aggregation. The internal structure is stabilized by calcium phosphate clusters, which bind the phosphoserine regions of caseins and thus maintain the internal structure of the micelle [6]. During processing, these internal and external interactions may be altered, leading to structural modifications of individual caseins and casein micelle structure.

Understanding the complexity of casein arrangement in the micelle is essential for the process control. Even though the substructure of the micelle was extensively studied [7][8][9][10], some aspects of the internal and external organization, especially its changes during processing, remain unclear. Changes in the micellar equilibrium take place during processing steps including addition of acids, heat treatment, cooling, pressuring, renneting, addition of cations etc. [1]. Certain physio-chemical changes that take place during some of the dominant technological processes are illustrated in Figure 1. Modified conditions affect the micelle in a different manner and intensity. Understanding these changes is important for achieving consistent product quality and process control. 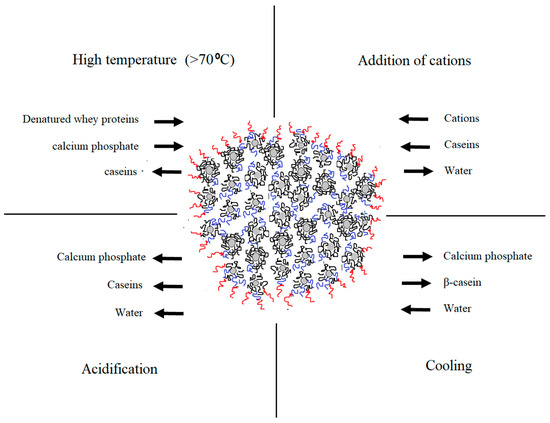 Figure 1. Changes in the native equilibrium of casein micelle in particular physio-chemical conditions during dairy processing (adapted from Gaucheron [11]).

Current knowledge describes only a few NMR structural studies on individual caseins, specific peptide fragments to be exact, concentrating only on their phosphoserine regions due to their importance in interactions with colloidal calcium phosphate and creation of a micellar skeleton [12][13][14][15][16][17][18][19][20][21][22]. Caseins possess a rather random structure that takes flexible conformations and thus are difficult models for structural studies. On the other hand, NMR has been shown to be a reliable technique to ascertain structural properties and modifications of many proteins. NMR provides information of the position of individual atoms which can present the spatial orientation of the molecule. This technique was proven to be reliable for structural studies on whey proteins, providing detailed information of the position of individual protons and, hence, the amino acid location in the polypeptide chain [23]. At present, the protein data bank (PDB) contains 10,520 resolved structures using the NMR method out of the 165,957 reported solved conformations of proteins (rcsb.org).

Proteins are composed of amino acids organized in a polypeptide chain, which can be in a folded or flexible organization in order to function properly. The tertiary structure of proteins has become relatively easy to predict based on a known amino acid sequence and complete spatial organization, which can be established by multidimensional NMR experiments. Consequently, high resolution NMR spectroscopy can be used to observe structural characteristics of many proteins, including milk proteins. The most studied nuclei are 1H, 15N and 31P. Each nucleus gives a specific chemical shift in the spectral view. For a complex molecular structure such as that of a protein, one-dimensional NMR is not sufficient for identification of structural features; therefore, higher dimensions are applied. The interpretation of these higher-order spectra can be challenging and dependent on the molecular weight of the protein and the method used. NMR studies on proteins with molecular weight up to 20 kDa had become a routine due to improvements in technology. This refers to a greater availability of experiments in higher dimensions (three- and four-dimensional methods), improvement in the radiofrequency, field strength, isotopic labelling, different NMR probes and software [24].

When it comes to NMR studies on milk proteins, whey proteins have been studied more extensively than caseins. The main focus has been on understanding their thermal instability with α-LA and β-LG, as the predominant whey proteins, being the most unstable. As globular proteins, α-LA and β-LG have served as absolute structural models for NMR studies. Complete structural assignments have been reported in literature using predominately 2D, 3D NMR and isotopic labelling.

Contrary to major whey proteins, caseins as the main group of milk proteins have been less studied by NMR. Several studies observed the secondary structure orientation of defined regions of the polypeptide chains of individual caseins. This refers to the phosphorylated regions of the molecule of multi-phosphorylated motif Ser(P)-Ser(P)-Ser(P)-Glu-Glu, which has been shown to be critical for the interaction with amorphous calcium phosphate [25].

In addition to studies on specific segments on caseins, NMR has also been successfully applied to detect the position and interactions between colloidal calcium phosphate (CCP) nanoclusters and phosphoserine regions in caseins including liquid-state and solid-state 31P and 43Ca NMR [26][27][28].

Calcium binding to caseins balances hydrophobic interactions and electrostatic repulsions leading crosslinking and/or self-association of caseins [29]. Hydrophobic regions of caseins can form defined structures using hydrophobic interactions. Why then are they referred to as proteins with a flexible and undefined structure? The answer will likely be in the existence of high concentration of prolines in the peptide chain, which hinders the formation of defined structures and, as mentioned before, the existence of regions with hydrophilic nature. However, FTIR showed that caseins adapt certain structural features [20][30]. Hence, using FTIR and CD was confirmed for β-CN to have several defined structural regions in the molecules including helix, loops and polyproline II [30]. This was related to self-association and folding of the molecule in its hydrophobic regions. However, these methods cannot guarantee the exact position of amino acids linking. On the other hand, Malin et al. [20] included NMR in combination with FTIR, CD and molecular modeling of the N-terminal region of as1-CN and identified the position of individual protons of amino acids. Thus, using methods for through-bond coupling they confirmed that all prolines are in trans conformation and with through space coupling they traced sequential dαN(i, i + j) backbone assignments. Moreover, close positioning of amino acids leads to non-specific interactions including Van der Waals forces that allow for packing of peptide into irregular conformations [17]. NMR has confirmed that caseins involve in micellar organization not only through colloidal calcium phosphate but also through weak interactions.

NMR can provide knowledge of the molecular level of mechanisms in milk proteins. Since NMR has proven to be a unique tool with high sensitivity to structural changes in milk proteins, its use may become more widespread, beyond academic research. Low-resolution NMR techniques are currently applied industrially for determining, e.g., solid fat content, but with advances in the technique and improved ease of use, it may also become applicable in the future for protein characterization in dairy products and ingredients.

More
© Text is available under the terms and conditions of the Creative Commons Attribution (CC BY) license; additional terms may apply. By using this site, you agree to the Terms and Conditions and Privacy Policy.
Upload a video for this entry
Information
Subjects: Food Science & Technology
Contributor MDPI registered users' name will be linked to their SciProfiles pages. To register with us, please refer to https://encyclopedia.pub/register :
Tatijana Markoska
View Times: 477
Revisions: 3 times (View History)
Update Time: 27 Oct 2020
Table of Contents
1000/1000
Hot Most Recent