Submitted Successfully!
Thank you for your contribution! You can also upload a video entry related to this topic through the link below:
https://encyclopedia.pub/user/video_add?id=186
Check Note
2000/2000
Graphenic Materials for Biomedical Applications
Edit
Upload a video

Graphene nanomaterials have been extensively studied in terms of their properties, modifications and application potential. This entry summarizes the results of research in the fields of graphene, graphene oxide, reduced graphene oxide, which have been obtained in the last two years (2017-2019), in particular those relating to cytotoxicity of graphene nanomaterials, drug delivery systems / genes / proteins and materials. with antimicrobial properties. A brief look at other applications such as biosensors, nanotheranostics, tissue engineering is also included. 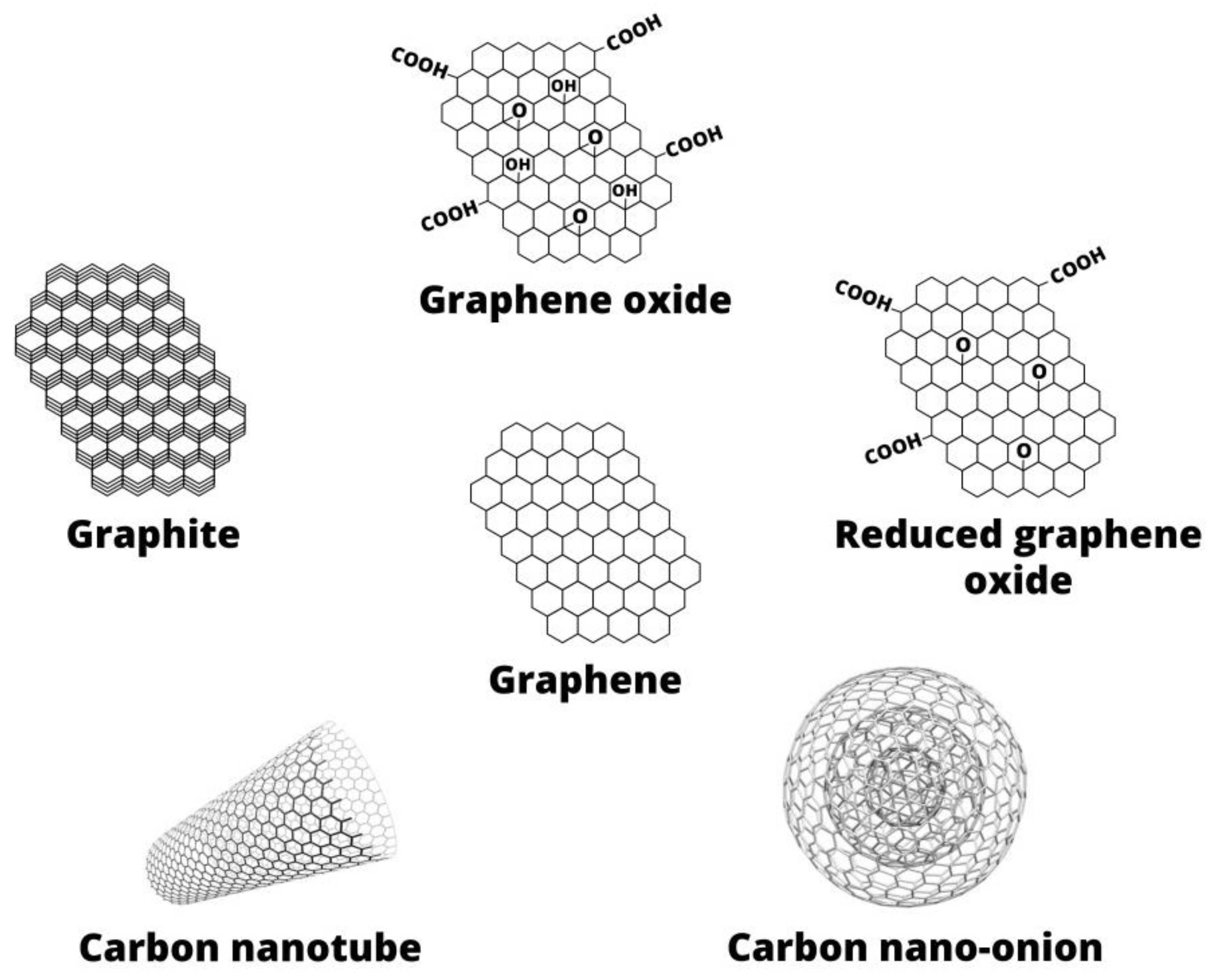 GR forms a basic structure of GBMs.[3] It is a 2D-planar sheet/crystal of one-atom thickness, consisting of sp2 hybridized carbon atoms. The carbon atoms are arranged into a honeycomb lattice, in which each carbon atom is bound to three adjoining carbon atoms via two single and one double covalent bond.[4][5][6] GR can exist in a single layer, few-layered structure, or forms a graphitic structure. GR is well-known for its exceptional and outstanding mechanical properties, such as an exceptional structural rigidity, accompanied a fracture strength of 130 GPa, an elastic modulus of 32 GPa, and a 1 TPa Young’s modulus. It exhibits high electrical conductivity (104 S/cm), ultra-high thermal conductivity (5300 W/mK), and excellent electron mobility (250,000 cm2/Vs) at room temperature, which is caused by a presence of a delocalized π-electron system in the carbon lattice, where each carbon atom contributes to this system by one unbound electron freely moving through the crystal. The other significant properties are a large specific surface area of 2630 m2/g, the unusual carrier transport velocity which reaches up to 40 GHz, the charge carrier concentration of 1.4 × 1013 cm−2, and high-current carrying capacity of up to 109 A/cm2. Optical transmittance of 97.7% has confirmed these superior optical properties.[5][7][8][9]

One can imagine GR as a polycyclic aromatic macromolecule which forms a planar structure with a large surface area, allowing the adsorption and anchoring of many compounds, such as biomolecules, metals, and fluorescent species. The compounds can interact with the system of delocalized π-electrons via electrostatic interactions and non-covalent π-π stacking. These kinds of interactions are one of the processes of GR surface functionalization.[3] [10][11]

There are several procedures for the synthesis of GR, and two major methodological approaches can be distinguished, namely, the ‘bottom-up’ and ‘top-down’ approaches (Figure 3). There are two main considerations for GR fabrication, namely, producing GR of high quality and simultaneously producing said GR in a high quantity.[12][5] Several methods have been properly investigated, such as the mechanical or chemical exfoliation of graphite, the epitaxial growth of GR on carbides of silicon, tantalum, or titanium, or on different metal substrates, such as nickel, copper, cobalt, iridium, platinum, etc. Other methods, such as chemical vapor deposition, solvothermal or organic synthesis could be also named, or synthesis of GR from graphite oxide through oxidation of graphite eventually via un-zipping of CNTs.[5][10][13]

GO is derivative of GR. It is a flake-like material that is characterized by the occurrence of polar oxygen-containing functional groups. The GO flakes consist of a typical graphenic planar structure, composed of sp2 carbon atoms that is disrupted by the presence of carbon atoms in the sp3 hybridization state. While on the planar surface, there are mainly hydroxyl and epoxy functional groups, while at the edges of the flakes there are carboxylic groups.[9][14][15] This composition is a reason for the aforementioned hydrophilicity, the good aqueous dispersity, and the excellent ability to easily cross cell membranes. The functional groups also allow for the capture, anchoring, or immobilization of polymers or biomolecules, such as nucleic acids, as well as drugs, NPs, etc., [16] and, for that reason, GO is a suitable carrier for delivering proteins, peptides, RNA, DNA, and various molecules of biologically active substances with antiviral, antibacterial, or anticancer activities into cells. [17]

For applications in the biomedical area, especially for delivering systems or antimicrobial materials, GO is usually synthetized from graphite using various modifications of Hummers’ method. One possibilities for a modified Hummers’ method is schematically shown in Figure 4. The effective delamination of graphite can be achieved in at a high yield by selecting suitable reagents and conditions for the manufacturing process. Thus, it can be produced in large quantities at affordable costs. The fully delaminated material may have a thickness of about 1 nm. [7][10][13] The polar groups are usually further modified by functionalization with the biocompatible and hydrophilic polymers, such as polyethylene glycole (PEG) or polyvinylpyrrolidone (PVP), then different drugs are loaded on the GR plane. Among GBMs, GO is an excellent material for drug delivery systems, precisely because the presence of functional groups makes it easy to modify its surface.[3][18]

The interactions of GO flakes are strongly influenced by their size. Functionalized GO flakes can be easily broken down to a smaller size by mild sonication and then are able to enter into cells. It is known that GOs with lateral dimensions higher than 100 nm do not easily penetrate into cells, however GO flakes of approximately 100 nm and less can readily cross the cell membrane. If the diameter reaches below 40 nm, their penetration in the cells may be further increased. [19]

The reduction of GO functional groups results in rGO. The structure of rGO is similar to that of GR, and it is associated with its higher electrical conductivity compared to GO. [12][14][20] Simultaneously, due to the lower content of oxygen-containing functional groups, it is more hydrophobic. Large-scale rGO production is usually performed in two steps. First, the graphite is chemically oxidized to form GO, which is then reduced to rGO. Hydrazine is the best-known reductant here, however, it is poisonous and hazardous for the environment. Due to this fact, alternatives have been studied, such as organic acids, amino acids, proteins, sugars, microorganisms, plant extracts, and antioxidants, which are called “green reducing agents”. [21] Another method of reduction is thermal, solothermal, electrochemical, microwave, and photoreduction. [2][10][15] It was found in some instances that not all functional groups were eliminated during the reduction, and some of them remained preserved on the rGO basal plane, e.g., –OH, –C–O–C–, –CO, and –COOH. The resulting properties of rGO are influenced by the reduction method used and the conditions under which it is performed.

Other representatives of GBMs include fullerenes and CNTs. Fullerene is produced by spherically wrapping 2D GR sheets into 0D closed formations . [22][23] CNTs are formed by graphenic layers containing carbon atoms in sp2-hybridized state, which are rolled up into a hollow, cylindrical arrangement. [24][25][26] Their important feature is their very high aspect ratio, which is given by their diameter, which is in the range of several nanometers, and length, which can even reach up to millimeters. According to chirality and possible adatoms, they have a metallic or semiconductive character. They can effectively bind biomolecules by hydrophobic interactions, π-π stacking, or van der Waals forces, similarly to GR. [22] Their properties and resulting interactions with biological systems are influenced by many factors, such as the number of layers, the lateral dimensions, shape, purity, and density of defects. [27] A huge number of scientific articles have been devoted to these materials and are therefore not included in this review.

GBMs have also received great attention in the field of biomedicine due to their exceptional features and possible applications (Figure 5).

The proper characterization of materials used to explore possibilities outside of biomedical technologies is one of the most important steps. The main reason for these proper characterizations is that the materials are prepared in scientific laboratories as well as by different manufacturers, using different procedures, which differ in their quality. This is further reflected in the quality of the resulting material. Materials should be described as single-layer GR, multi-layer GR, ultra-thin graphite, GR nanosheets, and GR nanomaterials. According to Wick et al. [27], a few-layer GR is composed of 2–10 GR layers composed of flake-like stacks, while ultrathin graphite consists of more than 10 layers, where the thickness is below 100 nm. This should be applied also for GO.[27][6][28] 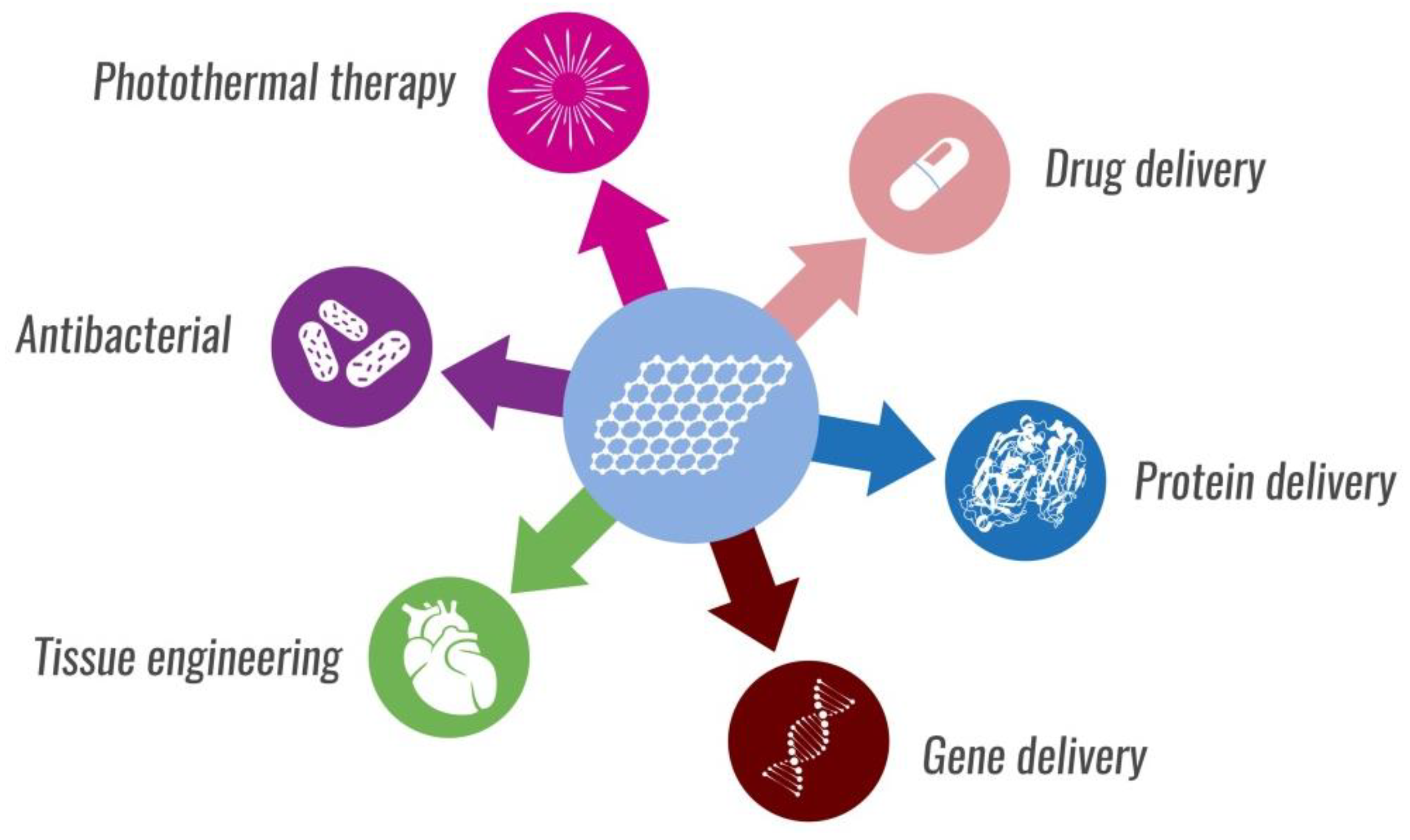 Figure 5. Application of graphene-based materials (GBMs) in the field of biomedicine.

GR- and GO-based materials can be characterized according to the procedure proposed by Wick et al. [27]. The basic qualities which should be carefully observed are the number of layers (thickness), lateral size distribution, and C/O ratio, as is represented in Figure 6. [7][23][27] The lateral size of GR flakes is one of the major factors influencing GR properties, because differences in size and geometry encourage a change in the ratio between the edge and the bulky structures, resulting in limited space in specific dimensions and a consequent change in mechanical and electrical properties. [29] This characterization is very important for biomedical applications, because it is obvious that 2D GBMs with rough surfaces, a small size, and sharp edges more readily penetrate cells as opposed to smoother GBMs with larger dimensions. Because each carbon atom lies on the surface, these materials, especially in the case of monolayered GR, have a theoretical maximum surface area. For that reason, they have an exceptionally large capacity for the adsorption of molecules and biomolecules. Their capacity corresponds to the specific surface area and bending stiffness, and is associated with the number of layers. Obviously, more 2D GR layer material has a lower adsorption capacity.[30]

Analytical methods, such as scanning and transmission electron microscopy (SEM and TEM), atomic force microscopy (AFM), infrared and/or Raman spectroscopy, X-ray photoelectron spectroscopy, and inductively coupled plasma mass spectrometry (ICP/MS), are the most useful tools for characterization. [31][32][33][34] TEM or Raman spectroscopy and AFM allow the determination of the number of layers and lateral dimensions. An accurate and real view of sheet quality, the number of defects, and delamination achieved can be obtained from AFM, which allows the determination of lateral dimensions by analyzing the shape and height of the GR/GO flakes. [6][28][35][36][37]

There are many other methods for characterization for different purposes, for which the prepared GR is used. Among them, dynamic light scattering, zeta potential and optical absorbance measurements, such as UV/VIS spectroscopy, can be listed.[38] For example, UV/VIS spectroscopy can be used to observe changes in GO structure after the functionalization of its surface. GO has a strong absorption of UV/VIS radiation at 230 nm. Characteristic absorbance at 300 nm is done by π→π* transitions of C=C bond and the n→π* transitions of C=O bond, respectively. Upon the binding of the functional groups to C=C bonds, a shift from 230 to 266 nm occurs, and the shoulder at 300 nm is reduced. [19][34][39]

Figure 6. Grid for the classification of GBMs, based on their atomic C/O ratio, lateral dimension, and number of layers. GBMs shown in the corners of the grid correspond to the ideal cases. The grid is in nanoscale, but one can use it for the microscale. Reprinted from[27] with permission from John Wiley and Sons, copyright 2019.

More
© Text is available under the terms and conditions of the Creative Commons Attribution (CC BY) license; additional terms may apply. By using this site, you agree to the Terms and Conditions and Privacy Policy.
Upload a video for this entry
Information
Subjects: Nanoscience & Nanotechnology
Contributor MDPI registered users' name will be linked to their SciProfiles pages. To register with us, please refer to https://encyclopedia.pub/register :
Daniela Plachá
View Times: 853
Revisions: 2 times (View History)
Update Time: 30 Oct 2020
Table of Contents
1000/1000
Hot Most Recent