Submitted Successfully!
Thank you for your contribution! You can also upload a video entry related to this topic through the link below:
https://encyclopedia.pub/user/video_add?id=1825
Check Note
2000/2000
Mycotoxin Control in Foods
Edit
Upload a video
This entry is adapted from 10.3390/foods9020137

Mycotoxins are the most well-known food contaminants causing significant damage to both human and animal health. The main producers of mycotoxins are the fungi of the genera of Aspergillus, Fusarium, Penicillium, Claviceps and Alternaria. Due to the serious toxicological effects of consuming mycotoxin contaminated foods, it is necessary to control them. In order to control mycotoxin contamination, two key strategies are followed.These strategies mainly focus on the prevention of mycotoxins and detoxification. The implementation of pre- and post-harvest control systems includes good agricultural practices (GAPs), good manufacturing practices (GMPs), appropriate environmental factors, favorable storage practices and biological, chemical and physical methods as decontamination and detoxification strategies.

Mycotoxins are toxic substances that can infect many foods with carcinogenic, genotoxic, teratogenic, nephrotoxic, and hepatotoxic effects. Mycotoxin contamination of foodstuffs causes diseases worldwide. The major classes of mycotoxins that are of the greatest agroeconomic importance are aflatoxins, ochratoxins, fumonisins, trichothecenes, emerging Fusarium mycotoxins, enniatins, ergot alkaloids, Alternaria toxins, and patulin. Thus, in order to mitigate mycotoxin contamination of foods, many control approaches are used. Prevention, detoxification, and decontamination of mycotoxins can contribute in this purpose in the pre-harvest and post-harvest stages.

Mycotoxins belong to the category of toxic secondary metabolites, and they have a low molecular weight. They are produced by filamentous fungi belonging to the phylum Ascomycota or molds, and they have great importance in the health of humans and animals, being the cause of acute and chronic diseases [1][2][3][4]. Bennett defined that mycotoxins are natural products produced by fungi that induce a toxic response when introduced at a low concentration to higher vertebrates and other animals via natural route [5]. The Greek word “mykes” meaning “fungi” and the Latin word “toxicum” meaning “poison” are the origin of the word mycotoxin [6]. A variety of fungi such as Aspergillus, Fusarium, Penicillium, Alternaria, and Claviceps spp. colonize their host and produce mycotoxins [7].

Mycotoxins exist in agricultural commodities like peanuts [8], grapes and wines [3][9], grains [10][11], nuts, dried fruit, coffee, cocoa, spices, oil seeds, fruits, fruit juices, beer [12], and other foodstuffs and feed crops, both in the field and during transportation. At any stage of the food production process (before harvesting, harvesting, drying, and storage), fungal production of mycotoxins can occur and can expose consumers to the risk of contamination directly through food consumption or indirectly through feed [13]. In general, under prolonged storage conditions and at extreme temperatures along with extreme humidity, all crops including cereals can be subjected to mold growth and mycotoxin contamination [5]. The risk of producing mycotoxins increases with favorable conditions for fungal growth if bad farming and harvesting practices and inadequate drying, handling, packaging, storage, and transport conditions are applied [14].

Μycotoxicosis is the disease that results from exposure to mycotoxins (e.g., ergotism, alimentary toxic aleukia, aflatoxicosis), with effects on different organs of the human body, which can potentially cause death [13][15] and can be categorized as acute or chronic [1]. Effects in humans and animals following direct exposure to mycotoxins vary in terms of their toxicity, e.g., carcinogenic, endocrine disorders, teratogenic, mutagenic, hemorrhagic, estrogenic, hepatotoxic, nephrotoxic, and immunosuppressive [16]. Contact, ingestion, and inhalation are the main ways of exposing mycotoxins to the human body [6].

3. Occurrence and Importance of Mycotoxins in Foods

During different food processing technologies, including cooking, boiling, baking, frying, baking, and pasteurizing, most mycotoxins remain chemically and thermally stable. The result of contaminated feed is the presence of mycotoxins in animal foods such as meat, eggs, and milk, thereby leading to contamination of the human plate [3]. Regulatory limits on significant levels of mycotoxins in food and feed are established by various authorities worldwide such as the United States (US) Food and Drug Administration (FDA), the World Health Organization (WHO), the Food Agriculture Organization (FAO), and the European Food Safety Authority (EFSA) [5]. The International Agency of Research on Cancer (IARC) classifies some important mycotoxins into categories by examining the existence of sufficient human evidence for carcinogenicity, through toxicological studies [14].

The agricultural industry has to deal with the presence of mycotoxins in food, as it is of global importance and a major threat [17]. In developing countries, factors such as poor food quality control, hot climate, poor production technologies, and poor crop storage conditions favor the development of fungi and the formation of mycotoxins, resulting in the more frequent occurrence of mycotoxin-contaminated foods in these countries [18]. Huge agricultural and industrial losses in billions of dollars occur annually because 25% of the world’s harvested crops are contaminated by mycotoxins [14]. The increased cost of production, the lowered animal production, the decreased market values, the irregularity of production [19], the regulatory enforcement, and the testing and other quality control measures [13] are some of the significant sources of economic loss due to the occurrence of mycotoxins in food and feed.

The reduction of mycotoxin contamination in agricultural commodities is a very important problem in many countries worldwide, which led to various preventive measures [20]. All pre-harvest strategies aim to avoid the development of toxigenic fungi and, hence, mycotoxins. However, once mycotoxins are produced, detoxification of foods should be based on post-harvest practices [21]. Figure 1 presents pre- and post-harvest strategies for the prevention and decontamination of mycotoxins in the food chain. 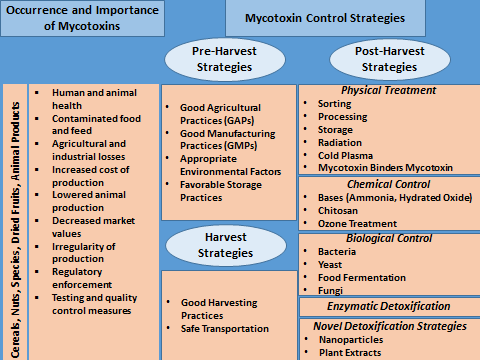 Figure 1. Pre- and post-harvest strategies for the prevention and decontamination of mycotoxins in the food chain

Strategies for pre-harvest prevention include good agricultural practices (GAPs), good manufacturing practices (GMPs), appropriate environmental factors, and favorable storage practices [21]. GAPs include the implementation of a crop rotation program, use of registered insecticides, fungicides, and herbicides for control of insect damage, fungal infection, and weed eradication, proper treatment of the seed bed, soil analysis to determine the need to add fertilizers, and enhancement of genetic synthesis to suppress mycotoxin production [22][23]. Moreover, the use of biological control agents, such as antagonistic fungi, is an important pre-harvest strategy to prevent mycotoxin contamination in staple cereals, grapes, and apples [24][25]. At food processing plants, GMPs must be applied in conjunction with GAPs to act cooperatively with hazard analysis and critical control points (HACCP) [25]. Temperature and humidity exert the greatest influence on mycotoxigenic fungi for the production of mycotoxins, among the environmental factors. As it concerns favorable storage practices, temperature, moisture level, and humidity of warehouses are crucial factors for mold growth and mycotoxin production [21].

Decontamination/detoxification of mycotoxins from various agricultural products is a global problem, both scientific and practical. It was shown that mycotoxins can be eliminated by natural means such as thermal insulation, radiation treatment, and low-temperature plasma, chemical methods, such as oxidation, reduction, hydrolysis, alcoholysis, and absorption, and biological methods with the use of biological agents [26]. Chemical and physical detoxification methods have many limitations; they cause nutrient loss, are time-consuming and ineffective, and need expensive equipment. In comparison, biological methods proved to be more effective, more specialized, and more environmentally friendly [27].

As contamination of food with mycotoxins is considered unavoidable, their control is necessary to minimize the risk of consuming food contaminated with mycotoxins. Mycotoxins cause significant losses on many levels as they can reduce not only agricultural profits through reduced quality of produced food and their subsequent disposal, but also through reduced animal productivity and health.Their control, concerns the application of basic pre- and post harvest systems. Although pre-harvest approaches should be preferred with a view to avoiding further contamination, natural, chemical and biological strategies are applied to degrade mycotoxins.

More
© Text is available under the terms and conditions of the Creative Commons Attribution (CC BY) license; additional terms may apply. By using this site, you agree to the Terms and Conditions and Privacy Policy.
Upload a video for this entry
Information
Subjects: Food Science & Technology
Contributors MDPI registered users' name will be linked to their SciProfiles pages. To register with us, please refer to https://encyclopedia.pub/register :
Sofia Agriopoulou
,
Eygenia Stamatelopoulou
,
Theodoros Varzakas
View Times: 1052
Revisions: 3 times (View History)
Update Time: 27 Aug 2020
Table of Contents
1000/1000
Hot Most Recent