Submitted Successfully!
Thank you for your contribution! You can also upload a video entry related to this topic through the link below:
https://encyclopedia.pub/user/video_add?id=18178
Check Note
2000/2000
2-Phenylethanol
Edit
Upload a video
This entry is adapted from 10.3390/foods11010109

2-Phenylethanol (2-PE), also known as 2-phenethyl alcohol, is a higher aromatic alcohol characterized by one of the most popular and desired fragrances, which is the rosy scent.

Over the years, fragrance usage became ubiquitous. A huge number of flavors and fragrances found their way into the daily life of almost all human beings. 2-Phenylethanol (2-PE), also known as 2-phenethyl alcohol, is a higher aromatic alcohol characterized by one of the most popular and desired fragrances, which is the rosy scent [1]. 2-PE has a wide range of applications in diverse types of products. It is commonly used in cosmetics including perfumes, in pharmaceuticals as a preservative and in various herbal products. Additionally, 2-PE is used in food and beverage industries as organoleptic enhancer of the final product [2][3]. For instance, this aroma is added to the composition of a variety of ice creams, candies, cookies, puddings, gelatins, cigarettes, and chewing gums [4]. This flavor has been approved by many worldwide organizations, including the Food and Drug Administration (FDA), Flavor and Extract Manufacturers’ Association (FEMA), the Joint Expert Committee on Food Additives (JECFA), and the Council of Europe (COE). They consider 2-PE as generally recognized as safe (GRAS, 2858), which gives it an added value [5]. Additionally, 2-PE exerts antimicrobial and antifungal properties. It can inhibit the growth of several Gram-positive and Gram-negative microorganisms, such as Escherichia coli, Staphylococcus aureus, Enterococcus faecium and many fungal species including Candida albicans, Candida dubliniensis, Saccharomyces cerevisiae, Kluyveromyces marxianus, and many other microorganisms [6]. These characteristics made this substance an appreciated additive in antiseptics, preservatives, cleaning, and personal care products [2]. It is noteworthy that 2-PE is also being used in aromatherapy. It was demonstrated that the odor of rose oil reduces plasma adrenaline concentration by 30% and human sympathetic activity by 40% [7]. In addition, 2-PE is used as a precursor for the synthesis of other valuable chemicals such as 2-phenethyl acetate (2-PEA), which is a volatile ester having also a rose-like odor [8].
The world production of 2-PE is approximately 10,000 tons per year, most of which is obtained by chemical synthesis, with a price between 3.5 and 5 US$/kg [9][10]. However, natural 2-PE, extracted from the essential oil of some flowers, is much more expensive compared to the chemically synthesized 2-PE with an estimated price of about 1000 US$/kg [11]. Martinez-Avila et al. estimated that the bioproduction of 2-PE via a microbial route would actually cost around 220 US$/kg [12].
Three different paths are used in the industry to chemically synthesize 2-PE. First, the Friedel-Crafts reaction of ethylene oxide with benzene in the presence of aluminum chloride. Second, the hydrogenation of styrene oxide with a small amount of sodium hydroxide and Raney nickel as a catalyst. Third, the oxidation of propylene with 2-phenylethyl hydroperoxide [13]. These methods involve the use of toxic chemicals (e.g., benzene, styrene oxide), which are carcinogenic and hazardous to the health and environment. Furthermore, chemical synthesis needs high temperatures, high pressure, and strong alkali or acid conditions. It is also associated with the production of unwanted byproducts. All of this, affects the quality of the final product, making its purification difficult [14][15].
On the other hand, natural 2-PE can be extracted from the essential oils of various flowers, including jasmine, hyacinth, lilies, and daffodils. However, the concentration of 2-PE in these flowers is too low, except for rose oil which can contain up to 60% 2-PE [11]. For instance, the dominant aroma compound produced by Rosa damascena, also known as damask roses, is 2-PE [16]. Because of the low concentration of 2-PE in almost all types, multiple separation steps are required [12]. As a consequence of the aforementioned rarity of natural 2-PE in flowers, requiring complicated and costly downstream processing, the large market demand cannot be satisfied [14].
The uses of 2-PE in cosmetic products and in different foods and pharmaceuticals drove increased demand for natural methods of production of this aroma [17], thus boosting research to find alternative methods for the production of natural 2-PE through biotechnological approaches [18]. The most promising method is through microbial fermentation, mainly the one based on the synthesis of 2-PE using yeasts [19]. Yeasts have the ability to synthesize 2-PE using L-phenylalanine (L-Phe) or glucose as substrates using the Ehrlich pathway and the shikimate pathway, respectively [4][20]. In fact, biotechnological production of flavors and fragrances is becoming more attractive, since it produces a final product classified as natural by the US Food and Drug Administration and by the European legislation if the substrates used in the process are of natural origin [21]. In addition to the formation of a “natural” product, the production cycle of microbial fermentation is short and environmentally friendly, decreasing the environmental pollution caused by the chemical synthesis of 2-PE [22][23]. However, it is noteworthy that microbial fermentation techniques need highly productive yeasts and cheap feedstocks in order to be economically attractive and compete with the chemical synthesis routes [24]. Agro-industrial waste and by-products having high nutritional value offer suitable environments for the growth of microorganisms. Through fermentation, microorganisms have the ability to use them as potential raw materials for the production of value-added products [25]. This is known as “biorefinery”, whereby the waste and by-products of an industry can serve as the raw material for another [26].

Yeasts are microorganisms with large synthetic abilities. Through enzyme-catalyzed reactions, they can convert simple carbohydrates and nitrogen sources into different complex molecules, particularly various flavor compounds [27]. In fact, numerous yeast species have the ability to produce 2-PE [9], and this production is strain-specific, which means that a significant difference in 2-PE production level may be seen between different strains of one species [28]. It is noteworthy that recently numerous metabolically engineered yeast strains have been constructed in order to significantly enhance 2-PE yield [29].
Saccharomyces cerevisiae, a significant eukaryotic model organism, is a well-known promising microorganism for its ability to produce 2-PE [30]. Many studies have proved that other so-called non-conventional yeasts are also able to produce 2-PE and some of them show a higher capacity for aroma metabolite production compared to S. cerevisiae [31]. Kluyveromyces marxianus [19], Kluyveromyces lactis, Pichia fermentans, Pichia anomala, Pichia membranaefaciens, Candida utilis [32], Phellinus ignarius, Ischnoderma benzoinum, Geotrichum penicillatum, Aspergillus niger [33], Meyerozyma caribbica, Meyerozyma guilliermondii, Metschnikowia chrysoperlae, Clavispora lusitaniae, Candida tropicalis [24], Yarrowia lipolytica, Zygosaccharomyces rouxii, Pichia kudriavzevii [2], and Pichia pastoris have all been previously reported to produce 2-PE, but to different extents [34].
Later in this entry, the ability of conventional and non-conventional yeasts to produce 2-PE on synthetic media and on agro-industrial waste and by-products will be discussed, along with the factors and fermentation conditions affecting the concentration of 2-PE produced by each species.

Yeast cells are capable of producing 2-PE via normal metabolism. 2-PE can be synthesized through two independent routes in yeast cells, either de novo via the shikimate pathway or by the bioconversion of L-Phe via the Ehrlich pathway (Figure 1) [35]. 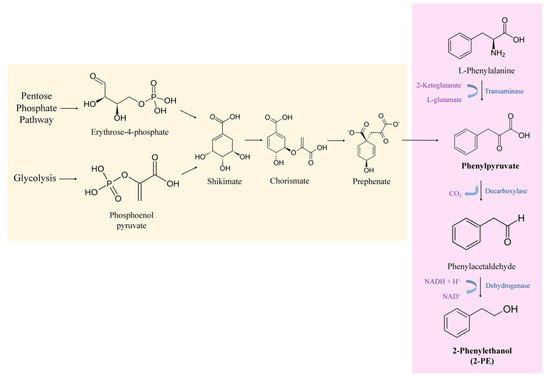 Figure 1. Metabolic pathways involved in the production of 2-PE in yeasts: Shikimate pathway for de novo synthesis of 2-PE and Ehrlich pathway for 2-PE production from L-Phe.
The Ehrlich pathway is considered the most efficient biotechnological approach and thus the more industrially attractive option. Most advances in biotechnology have focused on the development of this process [18]. In this mechanism, the yeast cells use the aromatic amino acid, L-phenylalanine, as a sole nitrogen source in order to produce 2-PE. It involves three steps, where the first one consists of converting L-Phe into phenylpyruvate. In the model yeast S. cerevisiae, this transamination reaction is catalyzed by two amino acid transaminase isoenzymes Aro8p and Aro9p. Second, phenylpyruvate is decarboxylated to phenylacetaldehyde. The second step of the Ehrlich pathway is catalyzed by the phenylpyruvate decarboxylase enzyme, Aro10p, and the three pyruvate decarboxylase isoenzymes Pdc1p, Pdc5p and Pdc6p. Finally, the third step consists of reducing the phenylacetaldehyde to 2-PE by alcohol dehydrogenases (Adh1p, Adh2p, Adh3p, Adh4p, Adh5p) and formaldehyde dehydrogenase Sfa1p [30][35]. This natural process is significantly improved when the amino acid L-Phe is available in the media, since high concentrations of L-Phe are needed to shift cell metabolism to the Ehrlich pathway [36].
On the other hand, yeasts can produce 2-PE from intermediate molecules of their metabolism (e.g., phosphoenolpyruvate (PEP) and erythrose-4-phosphate (E4P)). This is known by the de novo synthesis of 2-PE which takes place through the shikimate pathway. In this pathway, simple sugars are transformed into 2-PE [37]. PEP and E4P resulting from glycolysis and pentose phosphate pathway, respectively, are catalyzed to synthesize 3-deoxy-D-arabinoheptulosonate-7-phosphate (DAHP). Then, through a series of intermediates including shikimate, chorismate, prephenate, etc., phenylpyruvate is produced (Figure 1). Phenylpyruvate, the product of the shikimate pathway, next enters the Ehrlich pathway. Hence, phenylpyruvate is then decarboxylated to phenylacetaldehyde and dehydrogenated to 2-PE [38]. It is noteworthy that the shikimate pathway involves many steps with branched metabolic pathways and a variety of feedback inhibitions. Moreover, the glycolysis and the pentose phosphate pathways are mainly utilized for cell growth rather than 2-PE production. This will limit the transformation of simple sugars to 2-PE, hence the final concentration of 2-PE obtained is very low [35].

4. Factors Affecting the Rate of 2-PE Production in Yeasts

The extent to which yeasts are capable of producing 2-PE does not only depend on the species itself, but also on the media composition and the fermentation conditions [4].
If amino acids, particularly L-Phe, are the sole nitrogen source in the medium, the Ehrlich pathway predominates over de novo synthesis, which usually dominates at low amino acid concentrations [39]. However, in the presence of more assimilable nitrogen sources, L-Phe will be metabolized through the cinnamate pathway, limiting the 2-PE formation. Therefore, high concentrations of 2-PE can be achieved by supplying L-Phe as a sole nitrogen source [40]. It is important to note that the usage of L-Phe as a substrate for 2-PE production is costly [12]. Therefore, metabolic engineering is being used to boost the aromatic amino acids pathway (AAA) for providing L-Phe for the bioconversion and also overexpression of the key enzymes of the Ehrlich pathway [41].
On the other hand, fermentation conditions, particularly the availability of nutrients, nitrogen sources, and sugars supplied in the culture media, affect the metabolic activity of the microorganisms [42]. Additionally, temperature, pH, oxygen availability, and airflow rate greatly affect 2-PE production by altering the microbial growth, the microbial community structures, or the key enzyme activities [15].

5. 2-PE Production via Fermentation of Yeasts on Synthetic Media

More
© Text is available under the terms and conditions of the Creative Commons Attribution (CC BY) license; additional terms may apply. By using this site, you agree to the Terms and Conditions and Privacy Policy.
Upload a video for this entry
Information
Subjects: Biotechnology & Applied Microbiology
Contributor MDPI registered users' name will be linked to their SciProfiles pages. To register with us, please refer to https://encyclopedia.pub/register :
Mohamed Koubaa
View Times: 163
Revisions: 3 times (View History)
Update Time: 13 Jan 2022
Table of Contents
1000/1000
Hot Most Recent