Submitted Successfully!
Thank you for your contribution! You can also upload a video entry related to this topic through the link below:
https://encyclopedia.pub/user/video_add?id=178
Check Note
2000/2000
Olfaction and Ligand–Receptor Interaction
Edit
Upload a video

Odorant or olfactory receptors (ORs) are located in the humans’ nose, in the olfactory epithelium. The olfactory receptors can recognise a myriad of different odour molecules of a diverse protein sequence and OR genes constitute the most abundant family of G protein-coupled receptors (GPCRs). The human receptor gene family comprises 339 receptor genes and 297 receptor pseudogenes, unequally dispersed in 51 distinct loci on 21 human chromosomes. Humans have an extremely sensitive sense of smell, essential for the discovery of odours that are necessary for maintaining a healthy life, such as the smell of smoke (detection of fire) and the smell of rotten food (to avoid its ingestion).

The peripheral olfactory system was described in 1891 by Santiago Cajal and continues to elude our understanding. In this context, the publication entitled “The molecular logic of smell”, from Richard Axel, in 1995[1]was significant. It summarises intensively the research that was done in the late 80s and early 90s, which aimed to study the molecular processes of olfactory translation that occurs in the nose´s olfactory epithelium. The olfaction consists of capturing a great amount of diverse molecular aromas of the natural world, extracting information through the personal perceptions that are related to beverages, flowers, perfumes, and whatever humans encounter, within a daily basis[2]. According to the same authors, olfaction “(…) is a chemosensory processing system that can detect potentially infinite numbers of low molecular-mass compounds, called odorants, which combine at different concentrations, to elicit this complex perception (…)”[2]. Thus, the olfactory perception results of the reversible interaction of ORs with the odorant molecules (OM) (Figure 1).

Figure 1. Schematic representation of the interaction between OM (odorant molecule) and the olfactory receptors. This interaction can be analysed as a sequence of 2 reversible reactions: 1st the binding of the odorant to the olfactory receptor (OR) and its consequent release; and then, 2nd, the activation (and deactivation) of the OR due to a change of its conformation.

More than one “trillion” (1012) odours can be discriminated[3], and some authors say that “The next generation of rich media services will be immersive and multisensory, with olfaction playing a key role (…) for enhancing user quality of experience”[4].

In mammals, notably in humans, distinct groups of sensory neurons, which integrate several processing routes, constitute the olfactory system. This system comprises both the main olfactory system and the vomeronasal olfactory system. Each neuron in these systems expresses a type of G-protein-coupled receptor (GPCR) superfamily, specialised in the detection of a specific type of odour. Thus, the environment presents diverse odours that can be distinguished by the pattern of all sensory neurons that constitute the olfactory system[5]. For instance, humans require seven-transmembrane G-protein-coupled receptors to identify natural odorants like pheromones[6].

Therefore, the initial odour detection process begins in the posterior region of the nose, when volatile molecules enter the nasal cavity (Figure 2) biding, directly or through odorant-binding proteins, to receptors on the external surface of cilia and activate receptors on the olfactory epithelium. After this binding, a complex sequence of biochemical reactions occurs, similar to those found in rod photoreceptors in the human eye, i.e. olfactory receptor neurons contain a G-protein (Golf) protein, in which its Gαolf subunit dissociates from the Gβγ complex (G beta-gamma complex) and activates a specific olfactory adenylate cyclase (ACIII) (Figure 2(c)), generating cyclic adenosine monophosphate (cAMP). Then is observed the neuron depolarisation because the increase of the cAMP promotes the opening of the channels and allowing cations entry, sodium (Na+) and mainly calcium (Ca2+) ions. The ensuing increase in intracellular Ca2+ opens Ca2+ activated Cl− channels causing an extra inner current due to a Cl− efflux amplifying the olfactory receptor potential depolarisation. This depolarisation arises from the cilia until the axon hillock region of the olfactory receptor neuron, where action potentials are generated and transmitted to the olfactory bulb[8]. The axon hillock region of the olfactory receptor neuron, the last receptor of the depolarisation that arises from the cilia, generates and transmits action potentials to the olfactory bulb[9]. 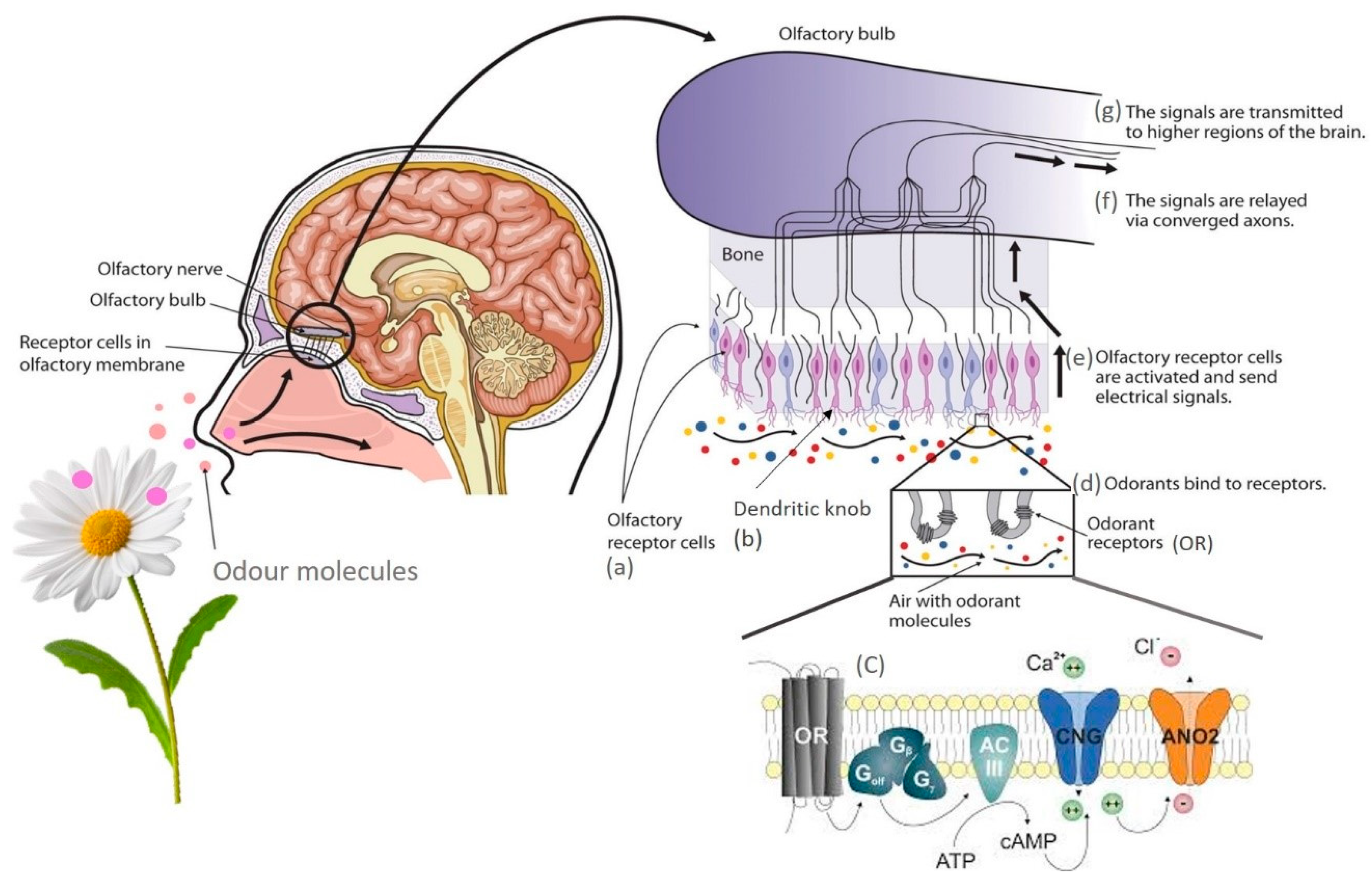 Consequently, olfactory transduction can be divided into ligand binding (Figure 2(d)), signal generation and signal termination (Figure 2(e)), where the generation of action potentials conducted along the axon to the olfactory bulb. The signals are relayed via converged neurons (Figure 2(f)), and then transmitted to higher brain regions (Figure 2(g))[8]. What happens when it is present a mixture of 2 or more odorants? Here the answer is much more complex. Several authors have done studies in this area but still, many questions remain unexplained. According to Bushdid and co-workers[3], since neither the dimensions nor the physical limits of the olfactory stimulus are known, the strategies used for other sensory modalities, namely those used regarding the estimation of the visual and auditory systems’ average resolution, are not possible to enforce in the human olfactory system. In the presence of a mixture of two odorants it is possible to determine the number of receptors activated by any concentration of the mixture, when in advance we know the affinity and efficiency of each of the components of the mixture alone, because the OR stimulated with 2 different odorants will respond with sigmoid curves as concentration’s function of the two odorants. Also, the number of ORs activated by the blend can be characterised by a logistic curve when two odorants compete for the same binding site[10][11].

Münch et al.[12]studied how mixtures of odorants interact with ORs supported by olfactory receptor neurons (ORNs) using Drosophila melanogaster ORNs. Their results are in agreement with others made in the rat, confirming that the response of an ORN to a binary mixture can sometimes be predicted quantitatively by knowing the ORN responses to its components. Rospars in 2013[13]aiming to answer this question presented diverse hypotheses of the functioning of the olfactory system based on mathematical models and elementary chemical kinetics. According to the author, on one hand, whenever the concentration of the odorant molecule increases, the activated ORs follow a hyperbolic curve. On the other hand, the affinity between the odorant and the OR does not depend on the total number of ORs but the 4 reversible reactions’ rate (binding vs. release and activation vs. deactivation). Finally, this author also concluded that the maximum number of receptors activated in a given period will depend on two things: the affinity of the OR and the rate constants of the activation-deactivation reaction (but not the release of the binding reaction)[13].

Nevertheless, some subjectivity is implied in the Humam sensory evaluation of odour. Sometimes products are not yet ready to be tasted by humans. To circumvent the limitations of the human being, science has arranged a manner of also mimicking the human nose. Electronic noses (e-noses) are devices created to recognise volatile odorous compounds. They are created to mimic the human nose, not in his shape or size, but his ability for entrapment of odours and sensory transduction mechanisms. E-noses usually possess cross-reactive sensing arrays that upon odour exposure generate patterned responses and analytical algorithms that catalogue this patterned response[14][15].

While insects and even sharks depend on their movement through the habitat in which they live to come into contact with sensing elements, mammals can sniff, allowing contact of the odorants with the receptors, usually inside of their nasal cavities. For aroma detection by the e-nose, volatile molecules must come into physical contact with the detectors, or by moving the carrier air to the detector or by moving the detector through the air allowing it to contact the volatiles[14].

E-nose can contain up to 40 sensors, each one standardised for a precise chemical compound. Compounds and sensors combined to provide a measurement pattern. The electronic nose can only identify patterns of expected and known volatile compounds[16]. So, to be able to detect, analyse and process the information, an e-nose device must be built putting together three components, each with a specific function[17]: A sample delivery system consisting in a multisensory array; a detection system such as an artificial neural network (ANN); and a computing system with appropriated software (digital pattern-recognition algorithms and reference-library databases)[18].

More
© Text is available under the terms and conditions of the Creative Commons Attribution (CC BY) license; additional terms may apply. By using this site, you agree to the Terms and Conditions and Privacy Policy.
Upload a video for this entry
Information
Subjects: Others
Contributor MDPI registered users' name will be linked to their SciProfiles pages. To register with us, please refer to https://encyclopedia.pub/register :
Alice Vilela
View Times: 2538
Revisions: 4 times (View History)
Update Time: 06 Jan 2021
Table of Contents
1000/1000
Hot Most Recent