Submitted Successfully!
Thank you for your contribution! You can also upload a video entry related to this topic through the link below:
https://encyclopedia.pub/user/video_add?id=1763
Check Note
2000/2000
Energetic Valorisation of Olive Biomass
Edit
Upload a video
This entry is adapted from 10.3390/pr8050511

The generation, composition, properties and potential energetic applications of the main three biomass obtained from the olive oil industry are illustrated.

Olive oil industry is one of the most important industries in the world. Currently, the land devoted to olive-tree cultivation around the world is ca. 11 million ha, which produces more than 20 million t olives per year. Most of these olives are destined to the production of olive oils. The main by-products of the olive oil industry are olive-pruning debris, olive stones and different pomaces. In cultures with traditional and intensive typologies, one single ha of olive grove annually generates more than 5 t of these by-products. The disposal of these by-products in the field can led to environmental problems. Notwithstanding, these by-products (biomasses) have a huge potential as source of energy.

With the dramatic development of society, biofuels produced from biomass are regarded as a potential alternative source for energy and therefore solve the increasing energy crisis. Besides efficient food processing [1] and food safety inspection [2], an affordable, reliable, sustainable and modern energy is also an important sustainable development goal requested to be achieved.

The olive tree (Olea europaea L., subsp. europaea) belongs to the Oleaceae family. Over 11 million ha are devoted to olive tree cultivation around the world [3], resulting in more than 20 million t of olives per year (Figure 1). The olive tree predominates in the agricultural production in the Mediterranean countries such as Spain, Italy, Greece, Turkey, Tunisia, Morocco, Syrian Arab Republic, Portugal, Egypt and Algeria (Figure 2), and it has been expanded in recent decades to other regions such as West Coast of the USA, Argentina, Australia, Chile, Peru, Uruguay and China [4]. Therefore, these countries are responsible for most of the worldwide production of olives (Figure 3). Olive tree not only supplies important olive oils providing us the healthiest vegetable fats, but also produces table olives, which are famous pickles for dishes starter. 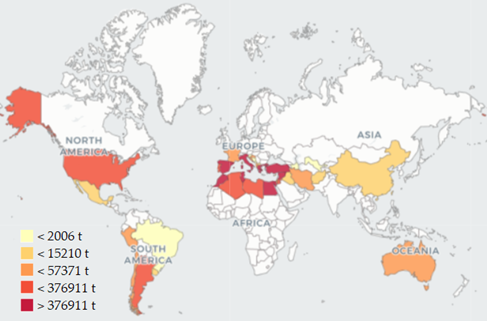 Figure 2. Average production of olives by country between 1994 and 2017. Reproduced with permission from FAOSTAT and OpenStreetMap Foundation [5]. 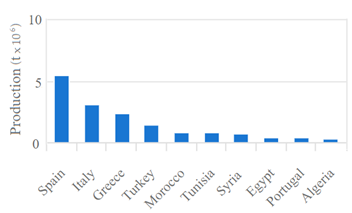 The generation of by-products from the olive oil industry per ha of culture is illustrated in Figure 4. As it can be observed, the main by-products are olive-pruning debris (OP), olive stones (OS) and extracted pomace dry by-products. Pruning is an important biennial operation carried out by farmers for removing old branches thus regenerating the tree. The olive-pruning debris consists of thin branches (usually <5 cm diameter) and leaves. Leaves can be removed from the pruning debris by means of a densimeter machine for industrial applications. Farmers usually use the bigger branches and trunks in small home boilers. An average of 3 tons of olive-pruning debris is generated from a hectare of olive orchard [6], leading to producing more than 3.3 × 107 t biomass. Generally, the olive-pruning debris is either grinded and ploughed into soil or left on the land to be incinerated (Figure 5), which not only causes air pollution (CO2 emissions) but also mineralizes the soil and increases the risks of pest propagation and fire accidents. The higher heating value (HHV) of the olive-pruning debris ranges between 16.7 MJ/kg and 19.8 MJ/kg[7][8][9], and its bulk density between 272 kg/m3 [9] and 347.9 kg/m3. The lower heating value (LHV) has been reported to be 16.55 MJ/kg [7]. If the olive pruning-debris were utilised to produce energy, it will not only maximise the reuse and exploitation of the value-added by-products, but also solve the environmental contamination and supply for the clean renewable energy. Its current price in Andalusia is 30–40 €/t . This low price makes OP an attractive material to produce pellets and other solid or liquid biofuels. 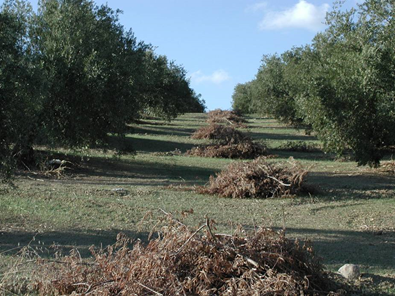 Figure 5. Olive-tree pruning piled up in the field.

Olive-tree pruning is a lignocellulose material and, therefore, is mainly composed of cellulose, hemicellulose and lignin (Table 1). Cellulose consists of thousands of chains, each chains made up of hundreds of d-glucose units linked up together by β(1,4) glycosidic bonds with reducing and non-reducing ends. The presence of hydrogen bonds results in a crystalline structure [10]. The cellulose is wrapped in a sheath of hemicellulose and lignin, which protects cellulose from being broken down. Hemicellulose, which can account for between 15% and 35% of a lignocellulose material on a dry basis, is a heterogeneous polymer containing pentoses (d-xylose, l-arabinose), hexoses (d-mannose, d-glucose, d-galactose, and d-fructose), acetyl groups and uronic acids. This heteropolymer is easier to break down than cellulose. Lignin is mainly composed of guaiacyl, p-hydroxyphenyl and syringyl units polymerized by ether bonds or carbon-carbon linkages. Lignin provides chemical, mechanical and biological resistance to the lignocellulose material, and it is a potential source of aromatic compounds.

Regarding the elemental composition, scarce information is available in literature. However, the data provided by some authors confirms that sulphur is not detected in the olive-pruning debris (Table 2), which is characteristic of the olive-tree by-products.

Currently, the most direct application of the pruning debris is for combustion. Thicker branches are sometimes separated and used as firewood for home or small industries. However, this direct combustion is an inefficient process for energy conversion that is responsible of large CO2 emissions.

Olive stones (Figure 6) are another biomass that is generated in olive oil mills. Olive table industry annually generates around 30,000 t olive stones [17]. Besides, olive stones are also generated in olive oil and olive pomace oil extractor industries after separating the olive stones from the olive pulp to obtain olive oil or olive pomace oil, respectively. In both cases, the size of the crashed endocarps never exceeds 7 mm in length. Most of the olive stones recovered in olive mills have sizes larger than 1 mm, the percentage of thinner solids increasing when increasing the weight of the pulp and inorganic matter in the olive. Saleh et al. (2014) reported that 97.3% (wt.%) of the olive stones collected in an olive mill had sizes greater than 1.2 mm [18]. Mata-Sánchez et al. (2015) found that 96.3% of their olive stones samples had diameters higher than 1.4 mm [19]. Furthermore, Fernández-Bolaños et al. (1999) and Barreca and Fichera (2013) reported maximum olive stones sizes of 6.2 mm and 1.6 mm, respectively [20][21]. This small particle size of olive stones is an advantage over other biomasses with larger sizes (e.g., olive prunings), avoiding the need to resort costly milling stages for subsequent use. Notwithstanding, its current price (80–100 €/t in Andalusia, Spain) is much higher than that of olive-tree pruning .

Olive stones account for roughly 20% of the olive weight. Thus, it was reported that 100 kg fresh olives contain 22 kg olive stones (4 kg seeds plus 18 kg endocarps) [22]. As a lignocellulose material, its main components are cellulose, hemicellulose and lignin (Table 3). As it can be observed, the percentage of hemicellulose in OS is higher than in OP. The different olive varieties, geographical location, the presence of traces of pulp and pericarp, and the analytical techniques used by the different authors could account for the different results shown of results in Table 3.

Due to its high lignin content, it was reported to be suitable for thermal utilization. Olive stones were reported to have a great potential as solid biofuel for combustion in comparison with other lignocellulose materials. An average lower heating value of 19,167 kcal/kg was obtained from 30 different olive stones obtained from different regions of Andalusia (Spain) . Concerning the higher heating value, different authors have pointed out that the HHV of olive stones ranged between 18.8 MJ/kg and 20.9 MJ/kg , these HHV measured by different methods. As a result, 99% of olive stones produced are currently used as solid biofuel to thermal power generation. 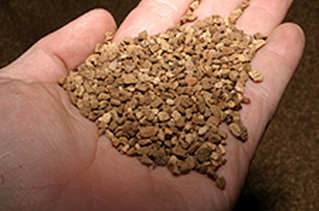 Olive stones possess a relatively low ignition point (approximately 215 °C) while the maximum combustion rate is 0.341 dm3/min and is achieved at 284 °C. As little mineral matter is contained in olive stones and their ash melting temperature was over 1400 °C, it thus reduces costs of burner cleaning. The bulk density of olive stones is 721.6 kg/m3 , double than that of olive-pruning debris, which accounts for the aforementioned potential of olive stones for combustion. On the other hand, as a type of lignocellulose material, it has been proposed as a source of fermentable sugars, antioxidants and other applications [26]. If added-value products can be obtained from olive stones from thermochemical and biochemical points of view, it will greatly solve the problem of environmental contamination.

With regard to elemental composition, sulphur is barely detected in olive stones, as it is characteristic of olive tree by-products (Table 4). Among the different trace elements present that can be found, chlorine and copper can be highlighted, with concentrations ranging from 90 mg/kg to 435 mg/kg and from 0.6 mg/kg to 2.3 mg/kg, respectively [27]. Ash percentages are usually lower than 2% (wt.) (Table 4). The main inorganic compounds found in olive stones ash are Al2O3, CaO, Fe2O3, K2O, MgO, and SiO2 [28][29][30].

The extraction process of olive oils has evolved over the years from discontinuous to continuous methods. In the first method, olive oil was obtained by applying hydraulic pressure (press method). Nevertheless, the olive oil industry has been modernized with the introduction of continuous methods by centrifugation. In the first instance, process with decanter of three outlets (olive oil, pomace and wastewater) were used. From the 1990s and with the aim of reducing the environmental impact of the wastewater generated by this process, the number of outlets in the horizontal centrifuge was reduced from three to two outlets, one for olive oil and the other for olive pomace and vegetable water (plus the added water during the process). Therefore, the type of pomaces and their physicochemical characteristics depend on the kind of process (Table 5).

Table 5. Physicochemical characteristics of the pomaces based on the process used. 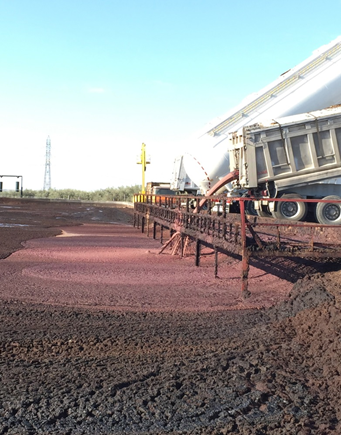 Figure 7. Olive pomace from oil mills that use the centrifugation process with a two-outlet decanter. These pomace rafts are located in the extraction plants of pomace oils.

However, if the olive pomace from the oil mill contains a low concentration of residual oil, in some cases, only the olive stone fragments are separated and the rest is dried in the rotary driers. In this case, this dry residue is directly used in the generation of electrical energy similarly to the extracted pomace.

All these studies highlighted an unyielding interest in exploiting biomass obtained from olive tree.  The different routes to produce energy from these by-products are summarized in Figure 9. 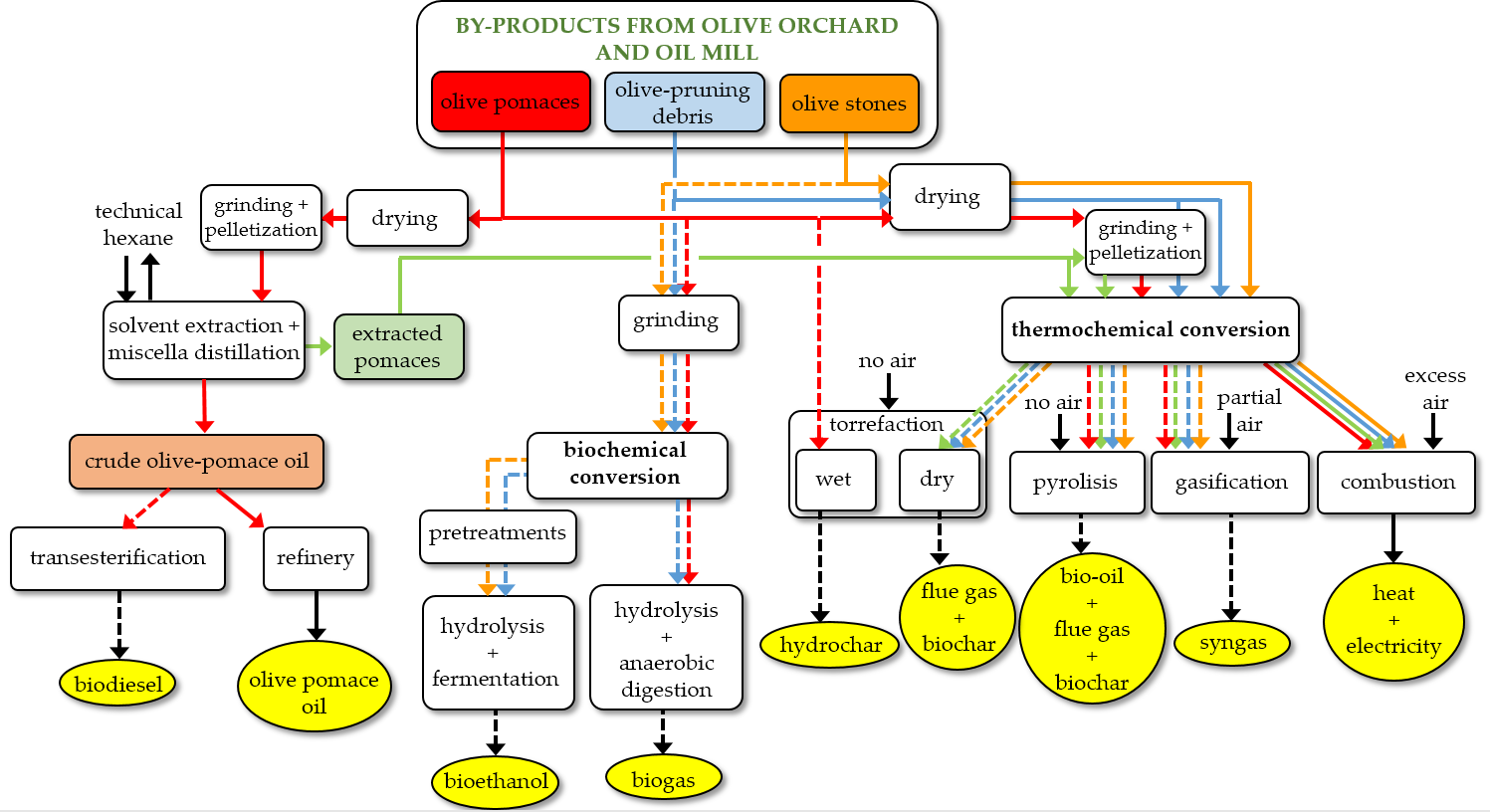 More
© Text is available under the terms and conditions of the Creative Commons Attribution (CC BY) license; additional terms may apply. By using this site, you agree to the Terms and Conditions and Privacy Policy.
Upload a video for this entry
Information
Subjects: Energy & Fuels
Contributor MDPI registered users' name will be linked to their SciProfiles pages. To register with us, please refer to https://encyclopedia.pub/register :
Juan Francisco García Martín
View Times: 371
Revisions: 3 times (View History)
Update Time: 27 Oct 2020
Table of Contents
1000/1000
Hot Most Recent