Submitted Successfully!
Thank you for your contribution! You can also upload a video entry related to this topic through the link below:
https://encyclopedia.pub/user/video_add?id=176
Check Note
2000/2000
DNA Excision Repairs and Implication
Edit

The physiological impact of the aberrant oxidation products on genomic DNA were demonstrated by embryonic lethality or the cancer susceptibility and/or neurological symptoms of  animal impaired in the base excision repair (BER); the major pathway to maintain genomic integrity against non-bulky DNA oxidation. However, growing evidence suggests that other DNA repair pathways or factors that are not primarily associated with the classical BER pathway are also actively involved in the mitigation of oxidative assaults on the genomic DNA, according to the corresponding types of DNA oxidation. Among others, factors dedicated to lesion recognition in the nucleotide excision repair (NER) pathway have been shown to play eminent roles in the process of lesion recognition and stimulation of the enzyme activity of some sets of BER factors. Besides, substantial bulky DNA oxidation can be preferentially removed by a canonical NER mechanism; therefore, loss of function in the NER pathway shares common features arising from BER defects, including cancer predisposition and neurological disorders, although NER defects generally are nonlethal. 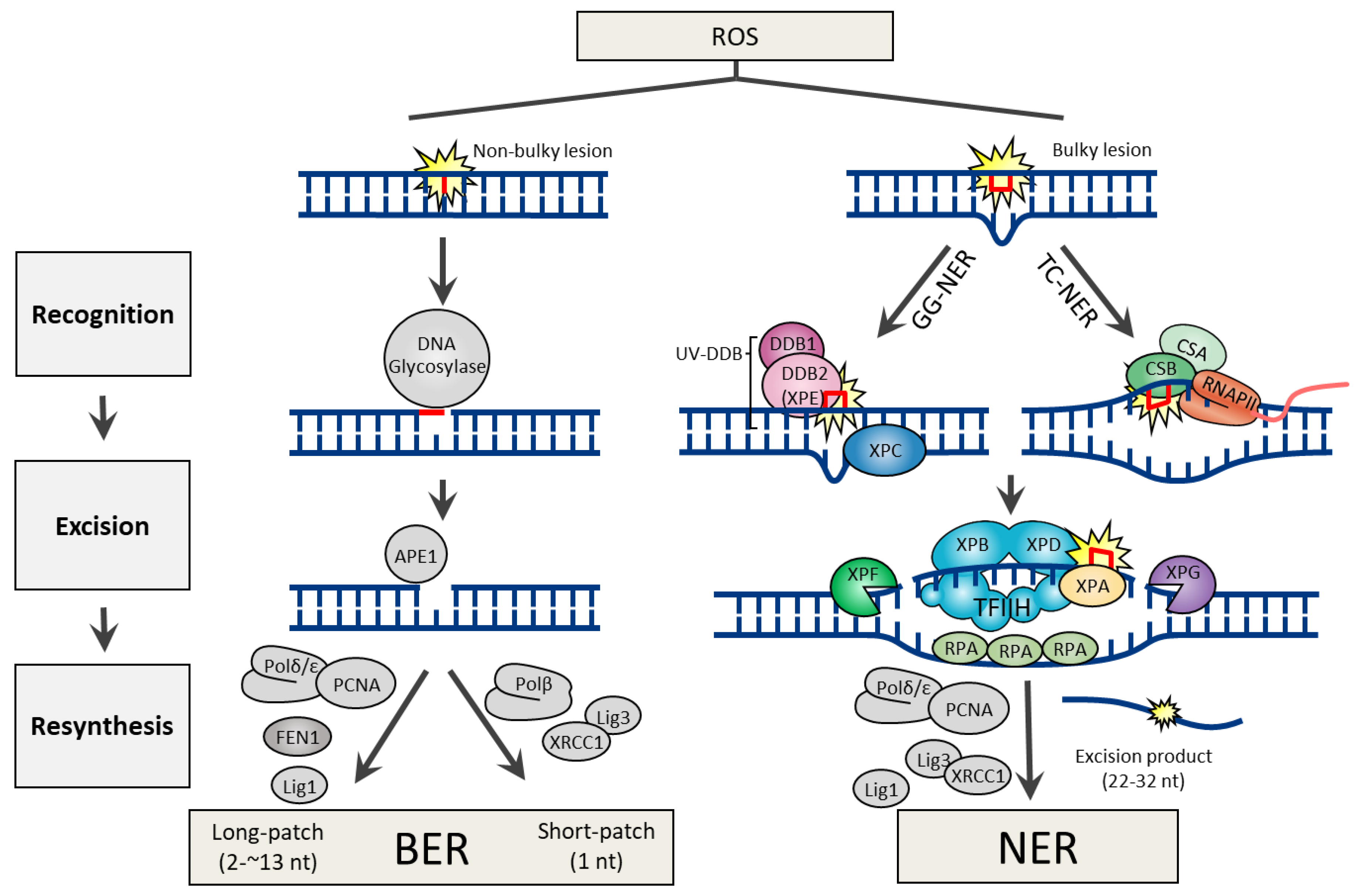 Many of the genes involved in BER are highly conserved from bacteria to humans [1], indicating that BER is a fundamental repair pathway in most living organisms. The BER pathway is specialized to fix non-bulky single-base lesions in the form of small chemical modifications, including oxidation, alkylation, and deamination damage. Base modifications are pro-mutagenic and/or cytotoxic, depending on how they interfere with the template function of the DNA during replication and transcription. To initiate the procedure, BER employs a specific DNA glycosylase for lesion recognition and elimination of the damaged base. Although every DNA glycosylase has a distinct structure and substrate specificity, all glycosylases share a common mode of action for damage recognition; 1) flipping the affected base out of the DNA helix, which facilitates a sensitive detection of even minor base modifications, 2) catalyzing the cleavage of an N-glycosidic bond, releasing a free base and creating an abasic site (apurinic/apyrimidinic site or AP site). DNA glycosylases can be either monofunctional or bifunctional. Monofunctional DNA glycosylases possess only the glycosylase activity, which includes UNG (uracil-N glycosylase), SMUG1 (single-strand-specific monofunctional uracil DNA glycosylase), MBD4 (methyl-binding domain glycosylase 4), TDG (thymine DNA glycosylase), MYH (MutY homolog DNA glycosylase), MPG (methylpurine glycosylase). In contrast, bifunctional DNA glycosylases have an intrinsic 3′ AP lyase activity accompanying with the glycosylase activity, which includes OGG1 (8-oxoguanine DNA glycosylase), NTH1 (endonuclease III-like), and NEIL1 (endonuclease VIII-like glycosylase). The processes following DNA glycosylase are common to the BER mechanism irrespective of the identity of the glycosylase. Base removal by a DNA glycosylase generates an AP site in DNA, which is then further processed by AP endonuclease 1 (APE1), which cleaves the DNA backbone 5′ to the abasic site, generating a 3’-hydroxyl and a 5’-2-deoxyribose-5’-phosphate (5’-dRP). DNA polymerase β (Polβ) utilizes the 3’-hydroxyl to fill the gap through template-directed synthesis. Depending on the number of nucleotides added, either short-patch (where a single nucleotide is replaced) or long patch BER (where 2-13 nucleotides are synthesized) pathways operate to complete the repair process. In short-patch BER, the intrinsic dRP-lyase activity of Polβ removes the 5′-dRP. The addition of more than one nucleotide (up to 13) constitutes long-patch BER and requires the assistance of flap endonuclease 1 (FEN1) to remove the displaced 5’-flap structure (Figure 1).

Genetic loss or mutation in key genes of the BER process, such as APE1 [2], Polβ [3], FEN1 [4], or the DNA ligase 3 [5], has been shown to have embryonic lethality in mice, while the phenotype of DNA glycosylase disruptions in mice is usually rather moderate, the only known exception being the TDG, which was essential for embryonic development in mice [6][7].

Neurons encounter particularly high levels of oxidative stress because of the high metabolic rate required to support their electrical and synaptic functions. Thus, the integrity and capacity of systems that repair oxidative DNA damage would be expected to be critical for the survival and proper function of neurons, particularly under conditions of increased oxidative stress that occur during catastrophic pathological conditions, including ischemic stroke. In a study with a mouse model of focal cerebral ischemic brain injury performed on normal and OGG1−/− mice, the potential role of OGG1 in ameliorating the detrimental effect of oxidative DNA damage to neurons was evaluated. The results indicate that after cerebral ischemia, the accumulation of brain oxidative DNA base lesions was significantly greater in OGG1-deficient mice, and was associated with greater brain damage and poorer behavioral outcomes, revealing an important role for OGG1 in brain BER capacity, which contributes to neuronal survival after experimental stroke[8].

Neurons from OGG1-deficient mice are sensitive to oxidative stress and reduced OGG1 levels have also been associated with Alzheimer’s disease (AD) [9]. Indeed, levels of expression of UNG, OGG1, and Polβ are lower in brain tissue from patients with AD than in brain tissue from age-matched controls without AD [10]. Polβ+/− heterozygote displayed impaired synaptic and cognitive functions, linking the loss of heterozygous BER function in the progression of AD [11].

While a mouse lacking UNG develops B-cell lymphomas, there is often not a clear phenotype in a mouse for a single DNA glycosylase mutation, presumably due to the substrate redundancy. For instance, the OGG1-deficient mice are viable and fertile without any visible phenotype [12][13], which suggests overlapping activities for the repair of 8-oxoG lesions. However, interestingly, additional deletion of MYH in OGG1-deficient mice predisposes 65.7% of mice to tumors, predominantly lung and ovarian tumors, and lymphomas [14]. 8-oxoG indeed is a common substrate of MYH and OGG1.

NER is famous for the unique repair pathway in humans to remove photolesions produced by UV radiation (sun exposure) that mainly forms cyclobutane pyrimidine dimer (CPD), a non-bulky lesion and pyrimidine-(6,4)-pyrimidone product (6-4PP), a bulky lesion. Besides, it also efficiently eliminates an extremely broad range of structurally unrelated DNA lesions, including bulky chemical adducts and intrastrand crosslinks [15]. The basis of the versatility of NER originates that it circumvents recognition of the lesion itself, instead, the lesion recognizing NER factors detects the presence of unpaired single-stranded DNA opposite the damaged strand [16].

Owing to the distinct damage recognition events, NER mechanisms can be further specified into two subpathways, global genome NER (GG-NER) and transcription-coupled NER (TC-NER). The former is responsible for eliminating lesions throughout the whole genome, while the latter is for those in the transcribing strand of active genes. During GG-NER, XPC (xeroderma pigmentosum C) or UV-DDB (UV-damaged DNA binding protein; a heterodimeric complex with DDB1 and DDB2) initiate the recognition of the damage. Structural analysis showed certain lesions, such as CPD, which do not significantly distort the DNA helix, are first recognized by DDB2 (also known as XPE) to extrude the lesions into its binding pocket, and thereby create a kink that is now recognized by XPC [17]. If the lesion is in a transcribed gene, it is sensed as a blockage to RNA polymerase II (RNAPII) and requires Cockayne syndrome B (CSB) and CSA to initiate the TC-NER process [18]. Regardless of the damage recognition mechanisms, the downstream events are conserved in both NER mechanisms. Damage verification is executed by XPA and helix unwinding is carried out by TFIIH (complexed with the XPB and XPD helicases). Lesion excision is catalyzed by the structure-specific endonucleases XPF and XPG, which incise the damaged strand at 5ʹ and 3ʹ from the lesion, respectively, which promotes releasing out of the lesion containing 22–32 nt-long oligomers. Final DNA gap-filling synthesis and ligation are executed by the replication proteins proliferating cell nuclear antigen (PCNA), Polδ, Polε, and DNA ligase 1 or XRCC1 (X-ray repair cross-complementing protein 1)–DNA ligase 3 complex (Figure 1).

Hereditary mutations in NER-associated genes are nonlethal and associated with disorders that are characterized by UV sensitivity and cancer predisposition, such as XP, CS, and trichothiodystrophy (TTD) [19]. XP comprises seven complementation groups (XPA-XPG) with defective GG-NER. Five of these groups also exhibit defective TC-NER, whereas XP-C and XP-E patients are TC-NER-proficient. The XP patient shows hypersensitivity on minimal sun exposure, pigmentary accumulations at exposed skin regions, and multiple early age skin cancers. Progressive neuronal degeneration is also observed in approximately one-third of XP cases, generally after the appearance of cutaneous signs [20]. However, unlike GG-NER-deficient XP patients, CS patients belong to one of two complementation groups (CS-A or CS-B), and those that are completely defective in TC-NER are not cancer-prone but exhibit a drastic reduction in life span [21]. In addition, CS patients display a number of neurological and developmental abnormalities as well as hypersensitivity to sun exposure. Although the molecular basis that leads to the diverse features of CS remains largely unknown, a reduced ability of cells to relieve oxidative stress has been proposed to be a leading cause [22][23][24]. Since cells from CS patients were found to be hypersensitive to oxidative DNA damage, a role for the CS proteins in the response to oxidized bases has been proposed [25]. Mutations in the CSB account for the majority of CS cases [26].

Clinical heterogeneity in disorders with NER mutations opens the question of whether defects in this pathway are solely due to impaired repair of helix-distorting DNA lesions. XP patients along with TCR defects (caused by some specific alterations in XPB, XPD, and XPG) present, besides increased skin cancer risk, accelerated neurodegeneration, and CS symptoms (XP/CS). The causative relationship between mutations and the CS clinical features in XP/CS cases is complex and must not only involve the NER defects but also the other functions of the NER proteins. Several studies have demonstrated that transcription impairment, oxidative repair, and energy metabolism alteration, as well as genotoxic stress, may explain the combined XP/CS phenotype [27][28]. Neuronal death might be due to accumulated endogenous damage, and indeed a growing body of evidence indicates that NER proteins participate in the processing of oxidative DNA lesions that are produced by the normal cell metabolism. The role of NER proteins in different pathways might explain the heterogeneity in disorders with NER mutations [29].