Submitted Successfully!
Thank you for your contribution! You can also upload a video entry related to this topic through the link below:
https://encyclopedia.pub/user/video_add?id=17189
Check Note
2000/2000
Engineering Principles for Clinicians
Edit
Upload a video
This entry is adapted from 10.3390/app112411694

As innovation and especially the advent of customized prostheses has deeply modified many surgical procedures in our discipline, it is imperative for the contemporary surgeon to become aware of the impact that the MDR will have on many aspects, including the choice of the manufacturer, the evaluation of the devices, point-of-care 3D printing labs, and medical software.

Metal implants for CMF surgery are generally produced using additive manufacturing (AM) technologies that allow to 3D print a lot of metal types and especially titanium and its alloys. 3D powder bed fusion (PBF) printing is a production process that consists of the progressive deposition along the vertical axis of ultra-thin layers of metallic powder, melted layer by layer using an energy source appropriately guided depending on the desired geometry. In the case of overhanging features in respect to the growth direction of the fusion, the geometry to be printed will often need to be supported by column-shape elements that have the double function to ensure a solid base for the protruding features and to dissipate heat [1].
The most important advantage of these technologies is to allow the creation of very peculiar and complicated shapes, that could not be produced with the classic subtractive machining, like milling. For this reason, 3D PBF printing is perfectly suitable to the challenges imposed by the prosthetic replacement of the facial skeleton, since it allows the creation of prostheses that perfectly replicate even the most complicated bone anatomies.
The printing process is very delicate, it takes place in controlled atmosphere and the conformity of the produced pieces depends firstly on a correct setting of the parameters of the machine and then on a good positioning of the piece in the melting chamber as well as on an appropriate design. The most common technologies for 3D PBF printing are SLM (selective laser melting) and EBM (electron beam melting). The main difference between them is the energy source, a laser for the former and a high energy electron beam for the latter [2].

It is useful to understand the main properties of the technology and to be aware of its limits and criticalities while designing a piece with particular resistance, finishing or precision features to be produced with 3D printing, since SLM and EBM are different. The main differences between them are the following [1]:
The correct positioning of the supports, especially when using the SLM, accounts for the good quality of the final piece in terms of dimensional precision, surface finishing, and defects. The main functions of support structures are [10]:
In summary, the SLM process requires an accurate study for the positioning of the supports and a fundamental post processing phase, in which the component is cleaned from the residual powder, the supports are removed, and the piece is thermically treated to relieve residual stresses and avoid cracking. EBM products, as seen before, do not need such a long post processing, except for a very accurate powder removing phase. Of course, rough surfaces “as built” will have a higher roughness value and might need some finishing operations to enhance their quality.
Figure 1 schematically represents SLM and EBM processes and Figure 2 illustrates CMF implants prototyped using SLM and used for surgeries. 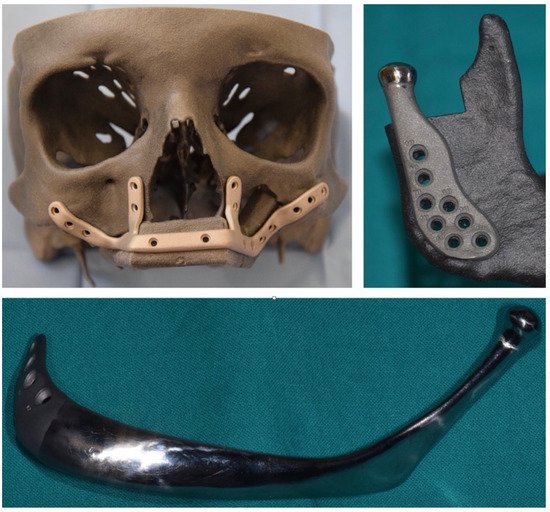 2. How to Evaluate the Requested CMF Implant? A Guide for the Surgeon

Before learning how to perform an effective visual inspection, it is necessary to understand some main defects connected with the 3D PBF printing. They can be divided into macroscopic and microscopic, and they usually depend on the wrong setting of the parameters of the machine, but they are even related with some criticalities of the geometry to be printed and its positioning inside the melting chamber. It is of prominent importance to underline that almost every defect can be avoided or corrected by conducting a systematic analysis and optimization of the parameters involved in the 3D printing process (Table 1).
Table 1. Criticalities that might occur during the manufacturing process and design recommendations to avoid them.

While evaluating the conformity of components printed with 3D PBF technology, it is a good habit to keep in mind all of these defect types in order to perform an efficient visual inspection. This is especially true while evaluating a CMF component that is under assessment for surgical implantation. The leading idea is the smoother and more homogenous the surface, the better the quality of the component. It will be of key importance to evaluate the absence of isolated pores (1), detectable with bare eye, and of inhomogeneous accumulation of material, like clots (2), burrs or thin leaves of material (3), since they represent structural discontinuities, possible zones of stagnation of unmelted powders or of undesired fusion secondary products (10–150 µm). If not correctly removed, they could promote the proliferation of pathogens. Figure 3 refers to a mandibular prosthesis ordered by our institution and rejected because of unwanted defects. In this example, even a bare eye inspection, if performed with attention and according with the aforementioned explanations, reveals unacceptable imperfections. 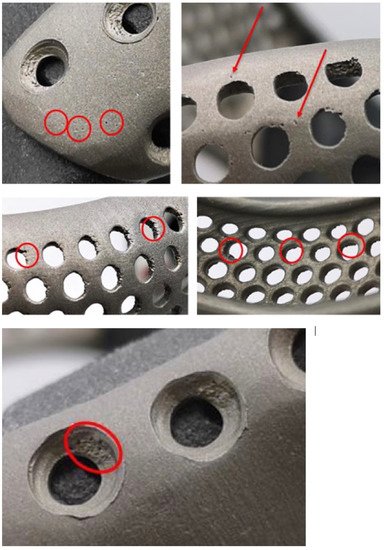 Figure 3. Example of accurate visual inspection conducted on a mandibular prosthesis ordered before MDR entered into force according to the explanations provided in Section 2.2.2. The manufacturer did not comply with requirements of the new MDR. In particular, undesired amounts of material can be seen on the edges of screw holes, appearing as plugs, clots, or thin leaves. Such imperfections are at risk of detachment during screw fixation and are freed into the body. Moreover, the whole implant surface is filled with small burrs, which are the ideal support for biofilm adhesion.

On the other hand, microporosity and microcracks are not detectable with a visual inspection, therefore special tests need to be carried out to observe them, as they could represent the trigger point for larger cracks especially in fatigue stressed components. Invasive and not invasive techniques could be used for this purpose. The former ones include:
whereas the latter ones include:
However, to be sure of the safety of the component, a biocompatibility panel of tests should be performed in order to understand if this kind of porosity is critical for contaminants and for bacteria proliferation.

Porosity and geometrical defects are often the consequence of a mispositioning of the supports or of a wrong orientation of the part in the melting chamber. Therefore, while creating and designing the virtual model, it is fundamental to follow some guidelines for the 3D PBF printing, which need to respect some feasibility requirements to avoid possible issues during the production steps:

More
© Text is available under the terms and conditions of the Creative Commons Attribution (CC BY) license; additional terms may apply. By using this site, you agree to the Terms and Conditions and Privacy Policy.
Upload a video for this entry
Information
Subjects: Dentistry, Oral Surgery & Medicine
Contributor MDPI registered users' name will be linked to their SciProfiles pages. To register with us, please refer to https://encyclopedia.pub/register :
Massimo Robiony
View Times: 124
Revisions: 2 times (View History)
Update Time: 16 Dec 2021
Table of Contents
1000/1000
Hot Most Recent