Submitted Successfully!
Thank you for your contribution! You can also upload a video entry related to this topic through the link below:
https://encyclopedia.pub/user/video_add?id=17065
Check Note
2000/2000
Periodontal Bifunctional Biomaterials
Edit
Upload a video
This entry is adapted from 10.3390/ma14247588

Periodontitis is a chronic infectious disease that destroys periodontal supportive tissues and eventually causes tooth loss. It is attributed to microbial and immune factors. The goal of periodontal therapy is to achieve complete alveolar bone regeneration while keeping inflammation well-controlled. To reach this goal, many single or composite biomaterials have been developed that can produce any two of the antibacterial, anti-inflammatory, and periodontal tissue regeneration effects, such as antibacterial and bone regeneration effects. They are called bifunctional biomaterials.

Periodontitis is a common chronic infectious disease, and severe periodontitis affects 10.8% of the population in the world [1]. It is the primary cause of tooth loss in adults [2]. It causes irreversible damage to periodontal soft and hard tissues, including alveolar bone. Furthermore, it is closely related to many systemic diseases, including cardiovascular disease, diabetes, etc. [3]. The etiology of periodontitis is complex, involving host response, genetic, environmental and microbial factors [4]. A recent study suggested that vitamin D levels might be related to periodontitis [5] and a pilot study shed light on further exploring the link between metabolic syndrome and periodontitis [6]. Overall, the generally accepted pathogenesis is an imbalance of oral symbiotic microbial groups, along with host immune defense [4]. Moreover, the accumulation of bacteria related to periodontitis hinders tissue healing and regeneration processes [7][8].
Many efforts have been made to improve periodontal treatment outcome. Typical treatment of periodontitis focuses on pathological process and reaches a satisfactory outcome [9][10][11]. However, effectively regenerating periodontal tissues remains a challenge [12]. The purpose of periodontal therapy is to realize periodontal tissue regeneration after controlling inflammation via infection clearance [13]. To reach this goal, bioactive materials with antibacterial and osteogenic properties are in constant evolution. They are classified as bioactive agents, guided tissue regeneration/guided bone regeneration (GTR/GBR) membranes, tissue engineering scaffolds and drug delivery systems according to different patterns of action. Bioactive agents and drug delivery systems may be applied under the gingiva. GTR/GBR membranes are barriers covering periodontal defect and protecting the osteogenesis space from epithelial invasion. Tissue engineering scaffolds are applied to fill the periodontal defect.

Periodontitis is a complex chronic disease, and comprehensive agents with different functions are of great demand for treatment [14]. Bioactive agents are either biological or synthetic, with both antibacterial and osteogenic activity. As potential therapeutic agents, they are prospective to improve the outcome of periodontal treatment.
In vitro and in vivo experiments, and even clinical trials have proven bioactive agents’ effects. In vitro experiments showed that they presented antibacterial activity against periodontal pathogens such as Porphyromonas gingivalis (P. gingivalis) and Streptococcus mutans (S. mutans). In addition, they promoted proliferation or osteogenic differentiation of cells responsible for periodontal regeneration, including human periodontal ligament fibroblasts (hPDLFCs), human periodontal ligament cells (hPDLCs) and bone marrow mesenchymal stem cells (BMSCs) [8][11][14][15]. In a mouse periodontitis model, psoralen and angelicin were able to reduce bone loss [14]. Particularly, 0.75% boric acid gel (BA) was placed under the gingiva as an adjunct to mechanical therapy in a clinical trial [15]. The results demonstrated that BA could generate some benefits, regarding clinical and radiographic indices. Furthermore, some agents could regulate inflammation and immune response, showing antioxidant activity [11][14][15].
Although bioactive agents have some advantages including safety, bifunction and convenient access, there are some limitations. For example, the efficacy of specific ingredients in some agents remains a mystery. To promote clinical application, further research is required to investigate the mechanisms and action modes in periodontal healing and regeneration processes. Further research is also necessary to be carried out in vivo.

Tissue engineering scaffolds play an important role in maintaining space, storing growth factors and supporting cell attachment and proliferation after being grafted to the bone defect [39]. Three key factors of tissue engineering are the scaffold, cells and signals [16]. Ideal bone graft materials should have osteoconductivity, osteoinduction and osteogenesis properties. They allow migration of osteogenic cells, differentiation of stem cells and new bone formation, respectively. However, existing bone graft materials are osteoconductive, but lack sufficient osteoinductivity, stable bone regeneration and antimicrobial properties. Moreover, xenogenic and allogeneic bone grafts even create a risk of infection [45]. To make some improvements, tissue engineering scaffolds are developed in combination with growth factors or stem cells, as well as antibacterial components. These scaffolds have improved osteoinduction, osteogenesis and antibacterial activity.
Antibiosis is a new development of tissue engineering scaffolds. Apart from antibiotics, CS and bioglasses were incorporated into the scaffolds [39][46][47]. They significantly inhibited the growth of pathogens in planktonic culture and biofilm in a dose-dependent manner. For example, DOX released from CS enhanced calcium phosphate cement (CPCC) could reduce the colony-forming unit (CFU) of Staphylococcus aureus (S. aureus) and P. gingivalis by four orders of magnitude in biofilm [46].
Growth factor or stem cells improve osteoinduction and osteogenesis activity of tissue engineering scaffolds. These scaffolds had a porous structure, which is beneficial for growth factor loading, cell attachment, growth and proliferation [48]. Recombinant amelogenin (rhAm), an active ingredient to promote periodontal regeneration, was incorporated into a mesoporous hydroxyapatite/CS composite scaffold [39]. In the scaffold, sustained release of rhAm promoted osteogenic differentiation of hPDLCs. Animal experiments showed that the scaffold could promote the formation of cementoid tissue. Qiu et al. combined human periodontal ligament stem cell (hPDLSCs) beads with DOX to construct anti-infective bone regeneration scaffolds [46]. hPDLSCs could be released slowly from the beads and enhanced osteogenic differentiation. In addition, the released DOX not only enhanced calcium phosphate cement, but also inhibited bone resorption by inhibiting matrix metalloproteinases. Human periapical cyst mesenchymal stem cells (hPCy-MSCs), which were isolated from periapical cysts, were seeded on mineral-doped porous scaffolds [48]. The scaffolds enabled the reuse of biological waste and had the potential to regenerate bone and dental tissues. Apart from osteogenic ability, some elements were able to promote angiogenesis as well [47].
Tissue engineering scaffolds have antibacterial activity, improved osteoinduction and osteogenesis abilities, as well as excellent mechanical property in vitro. They are expected to control inflammation via combating infections and enhance bone regeneration. To confirm the results, further research is needed to investigate their long-term in vivo performances. Moreover, attention should be paid to the usage of some potentially toxic substances [47].
Table 1. The summary of periodontal biomaterials.

Medication is an adjuvant to consolidate periodontal treatment and prevent the progression or recurrence of periodontal disease. Conventional periodontal medication has many limitations, including single effects, short-acting, drug resistance, side effects and inconvenient operation [55][56]. Furthermore, it does not show significant clinical and anti-microbial effects [57]. Currently, local drug delivery systems for the periodontal region are constructed by loading different substances with biocompatible carriers. These systems improve bioavailability of drugs, avoid side effects of systemic medication and achieving targeted, continuous and controllable release. Therefore, they are expected to be an ideal therapy [29][36].
The performance of drug delivery systems is related to type and proportion of the loaded components and surface of the carriers. In these systems, antibacterial components are not only antibiotics [51][54], but also metal nanoparticles such as silver [11][23][24][25][26][27][28][29][30][31][34][35][36][37][38][39][43][44][46][52][53][57][58] and polymer nanoparticles such as CS (nCS) [53]. Osteogenic components include drugs such as lovastatin and minocycline [51][54], metal nanoparticles such as silver and calcium [52][59], and polymer nanoparticles such as poly(lactic-co-glycolic acid) (nPLGA) and nCS [53], etc. Different ratios of active ingredients produce different effects. Xue et al. found that the performance of the mixture was the best when the nPLGA to nCS ratio was 3:7, and the content of silver nanoparticles (nAg) was 50 µg/mL [53]. In addition to the active components, surface modification of the carrier has direct contact with antibacterial properties. It kills bacteria by changing their membrane permeability without increasing drug resistance [59]. As the result, the systems have antibacterial activity against many kinds of bacteria and nearly achieve complete bone regeneration [13].
The mechanism of drug release from polymer includes diffusion and polymer degradation [54]. Thus, most systems present initial burst release and subsequent stable slow release for about 5–30 days. Initial burst release of antibiotics above minimal inhibitory concentration (MIC) is necessary since the control of infection and inflammation is more evident in the early stages of wound healing [29][50]. The subsequent stable release prevented the growth of residual bacteria [30]. In addition, infection must be controlled before bone regeneration. Therefore, Lee et al. designed a sequential release system which allowed the outside tetracycline release at the beginning, followed by the inside lovastatin [54]. This release strategy may increase the utilization of both antibacterial and osteogenesis ingredients. Furthermore, prolonged release time of lovastatin had a significant effect on enhancing periodontal bone regeneration.
To improve drug targeting and achieve on-demand delivery in specific microenvironments, stimuli-responsive release has become a new trend. There are a lot of alkaline phosphatases (ALP) in the periodontal pocket of periodontitis patients, which can decompose polyphosphate esters (PPEs). Considering this, Li et al. added PPE and minocycline hydrochloride (MH) to CS to prepare an enzyme-responsive drug release film [51]. Within 12 days, the accumulative release of MH reached 80% under the action of ALP. In addition, MH provided effective antibacterial activity for the membrane. Compared with the control group, more human gingival fibroblasts (HGFs) and rat osteoblasts attached to the membrane, and the osteogenesis of rat osteoblasts was promoted. In vivo experiments confirmed that the membrane could improve gingival index and reduce alveolar bone loss. In addition, PEGPD@SDF-1 thermosensitive hydrogel loaded with antimicrobial peptide and stromal cell-derived factor-1 (SDF-1) was synthesized to control drug release according to the severity of infection (Figure 1) [13]. In the hydrogel, drugs were released in response to gingipain secreted by P. gingivalis and realized antibacterial properties as well as regeneration. With thermosensitive injectable characteristics, the hydrogel could accurately fit the defect with tiny or irregular shapes and avoid invasive operations. Continuous secretion of gingival crevicular fluid and oral movement make the periodontal environment unstable. Nevertheless, hydrogels with certain adhesion properties may remain stable and present constant function in the periodontal pocket. Furthermore, the porous structure of the hydrogels in accordance with bone compartment facilitated the penetration, growth and differentiation of stem cells. 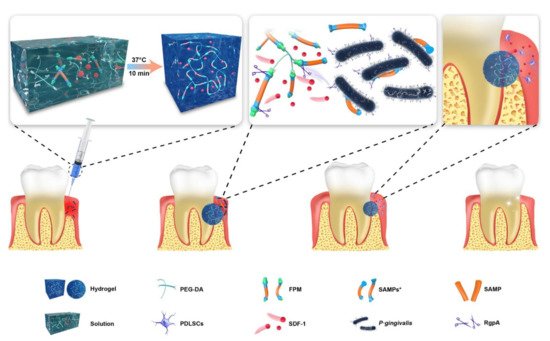 Figure 1. Schematic illustration of the composition and application of PEGPD@SDF-1 hydrogel. The hydrogel is cross-linked by FPM and PEG-DA and loaded with SDF-1. The transition from solution to hydrogel is completed at 37 °C in 10 min. FPM contains SAMP in the center and two anchor peptides with specific splicing sites in the lateral. The RgpA released by P. gingivalis initiates splicing of the specific sites in FPM. Then, SAMPs* and SDF-1 are released to resist P. gingivalis and promote osteogenesis, respectively. Reprinted with permission from reference [13]. Copyright 2021 American Chemical Society.
Drug delivery systems have many advantages as well as limitations. Compared with conventional medication, they have an effective controlled release mode, long-lasting effects, good osteogenic potential and antibacterial activity [54]. In addition, more researchers have applied components with strong antibacterial effect, low bacterial resistance and weak cytotoxicity [13]. However, some ingredients are still toxic to cells at high concentrations [50][53][54]. Therefore, attention should be paid to adjusting their concentrations to achieve a balance between biological activity and biocompatibility. Furthermore, a drug release time suitable for both infection control and osteogenesis still needs to be determined.