Submitted Successfully!
Thank you for your contribution! You can also upload a video entry related to this topic through the link below:
https://encyclopedia.pub/user/video_add?id=17004
Check Note
2000/2000
Biomedical Applications of Gold Nanoparticles
Edit
This entry is adapted from 10.3390/jfb12040070

Gold nanoparticles (AuNPs) are extremely promising objects for solving a wide range of biomedical problems. The gold nanoparticles production by biological method (“green synthesis”) is eco-friendly and allows minimization of the amount of harmful chemical and toxic byproducts.

Antibacterial activity. The high resistance of pathogenic microorganisms to different, and even the most modern antibiotics is becoming an increasingly serious problem for clinical medicine that could be decided using nanoparticles of various metals, including AuNPs. The antimicrobial activity is dependent on the method of synthesis, size, shape, and concentration of biosynthesized gold nanoparticles [1]. The influence mechanism for the pathogenic bacteria of the genus Bacillus, E. coli, Streptococcus, Staphylococcus, etc., is still extremely topical [2][3][4]. In addition, a significant point is the belonging of potentially destroyed bacteria to Gram+ or Gram−, according to their cell walls structural features. Although Gram-positive and Gram-negative cell walls are negatively charged with a high-affinity degree to positively charged AuNPs, having a thinner cell wall, Gram-negative bacteria are more simply exposed to AuNPs, while Gram-positive have rigid peptidoglycan layers on their surface, which prevent the AuNPs entry. For example, the inhibitory effect was shown only for Gram-negative bacteria in E. coli and Enterobacter ludwigii, B. subtilis, and Enterococcus faecalis research [5]. More considerable antibacterial effect was shown for bio-produced AuNPs compared with chemically synthesized gold nanoparticles [6]. Such antibacterial activity may be due to the synergistic effect of the plant compounds acting as capping agents [6]. AuNPs are a valuable element against bacterial biofilms. The AuNPs weaken the biofilm formation of Proteus sp. by inhibiting the production of virulence factors such as exopolysaccharides and metabolic activity such as surface hydrophobicity playing an important role in bacterium–host cell interactions and biofilm architecture in microbes, respectively [7]. In [8], bacterial surface attachment, flagella loss, biofilm assemblage, and clumping inside biofilm are demonstrated as the antibacterial processes.
Antifungal activity. Pathogenic fungi (C. albicans, Aspergillus spp., Penicillium spp., Trichoderma viridae, etc.) and their associated diseases represent a serious problem for clinical medicine. The emergence of new antibiotic-resistant strains requires the search for new methods of combating these pathogens. Among such potentially applicable substances, gold nanoparticles are emphasized. AuNPs interact with cell wall macromolecules, damaging them and affecting membrane proteins [9]. The inhibition of cell wall β-glucan synthase leads to changes in the cell wall integrity and further cell damage [9][10]. Besides, antifungal activity of gold nanoparticles is possible by increasing the ROS (for instance, in C. albicans) [10]. High antifungal activity was observed against C. tropicalis, C. albicans [11], A. flavus and A. terreus [12], A. fumigatus [13].

Viral diseases have always posed the greatest of human threats. Notwithstanding that the investigation of these infectious agents is very intensive, we still know very little about combating methods. Moreover, for many known viral diseases, neither drugs nor vaccines were not found. Therefore, the struggle methods search against these extremely dangerous organisms stays a very urgent task requiring a prompt, and sometimes immediate decision. Metal nanoparticles are a very promising trend in fighting against various kinds of viruses. It is supposed that AuNPs can bind to a viral particle, blocking the connection with cellular receptors or viral receptors that inhibit viral cycle onset [14]. Aside from that, nanoparticles adsorbed on the cell surface can significantly change the membrane potential, leading to blocking the viral penetration into the cell [14]. Additionally, the inhibition of virus binding and penetration into the host cell, binding to the plasma membrane, inactivation of viral particles before penetration, and interaction with double-stranded DNA were found to be the antiviral mechanism of AuNPs [14]. For instance, gold nanoparticles are offered as an innovative means to counteract the measles virus (MeV) [15]. The active inhibition evidence of MeV replication in Vero cells by AuNPs obtained from garlic extract (Allium sativa) was discovered [15]. The interaction of AuNPs and MeV is probably resulting in the viral receptors blocking, preventing cell adsorption and the viral infection onset in the host cell. This type seems to be an ideal antiviral approach that excludes interaction with the cell. Additionally, having high stability and biocompatibility, AuNPs can easily interact with various biologically active compounds of garlic extract, including organosulfur compounds, saponins, phenolic compounds, and polysaccharides [15]. The active components are garlic organosulfur compounds, such as allicin, and products derived from allicin (diallyl sulfide, diallyl disulfide, diallyl trisulfide, ajoene, allyl-cysteine, and allyl-cysteine sulfoxide), which gives additional positive features against viral infection [16]. El-Sheikh et al. identified that AuNPs inhibited the replication of the Herpes Simplex (HSV-1) virus infection to Vero cells in a dose-dependent manner which reduced 90% CPE of HSV-1 at 31.25 μL [17]. Gold nanoparticles synthesized in Sargassum wightii extract prevented HSV-1 and HSV-2 viruses’ infection of Vero cells in a dose-dependent manner; moreover, the toxicity absence in high concentrations makes these AuNPs a potential antiviral agent [18]. However, there are other data regarding the gold nanoparticle’s effect on the vital activity of viruses: AuNPs can penetrate through the cell membrane into cells, and then inhibit viral DNA and RNA replication [14]. For example, AuNPs inhibit post-entry Foot-and-Mouth Disease (FMD) virus replication, accompanied by the onset of intracellular viral RNA synthesis, while at non-cytotoxic concentrations, AuNPs do not exhibit extracellular viricidal activity and inhibition of FMD growth in infection early stages, including attachment and penetration [19]. Thus, the proposed mechanism of antiviral activity based on [14][15][16][17][18][19] was demonstrated in Figure 1. Unfortunately, data on the “green” synthesis of gold nanoparticles with antiviral effects are very poor. Most of the works are devoted to chemically produced functional nanoparticles modified with specific molecules. Such complexes can be the basis for drugs’ targeted delivery to organs and tissues, including antiviral fighting. 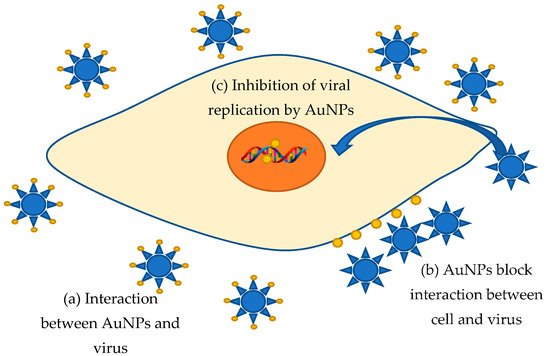 The last hundred years were marked by a huge increase in cancers, considered one of the main reasons for death worldwide. Unfortunately, most of the developed drugs and approaches have many side effects. Therefore, the new drugs with low toxicity and synthesized in a “green” way are very prospective anticancer agents. The antitumor effect of gold nanoparticles in vitro was shown for Hela N (Human cervix carcinoma), Hep G2 (human liver cancer), A549 (human lung carcinoma), MCF-7 (breast adenocarcinoma), HCT-11 (colon carcinoma), PANC-1 (human pancreatic cancer), ovarian adenocarcinoma (Caov-4) in a dose-dependent manner [38][39][40][41][42][43][44]. The provided gold nanoparticles effect depending on the shape, size, and chemical composition of the nanoparticle’s surface was discovered in [3][45][46]. Apparently, smaller gold nanoparticles have more antitumor effect due to the larger surface area of smaller NPs [47]. Undoubtedly, capping agents contribute to the antiproliferative activity of AuNPs, participating in the protein’s modification or cell growth enzymes and independently performing anticancer activity [48][47][49]. In addition, the antitumor activity of medicinal plant extracts is expressed by stopping the cell cycle, cell apoptosis, and induction of antiangiogenesis [50][51]. In this way, the plant-synthesized adsorbed active molecules and their therapeutic activity, as well as biocompatible gold nanoparticles are of great importance in anticancer therapy [49]. Although the mechanism of AuNP’s effect on cancer cells is not completely clear, the centerpieces are (a) ROS generation, (b) Glutathione (GSH) oxidation, (c) cell cycle arrest, and (d) caspases [52][53][54][55][56][57][58][59][60][61][62][63][64][65][66][67][68].
The AuNPs’ cytotoxic effect on cancer cells is primarily due to their easy permeability to cellular barriers and strong affinity for various biological macromolecules. As byproducts of normal cellular metabolism, ROS play an important role in cellular signaling pathways such as cell-to-cell signaling, cellular metabolism, cell proliferation, and cell apoptosis. The imbalance in ROS and antioxidant levels plays a critical role in tumor initiation and progression [69]. Gold nanoparticles can induce cytotoxicity through ROS, generating damage to cellular components through intracellular oxidative stress [70][71]. For example, AuNPs increase the ROS production in HeLa cells and probably lead to apoptotic cell death via the mitochondrial-mediated pathway [70]. Decreased mitochondrial membrane permeability and mitochondrial dysfunction leading to apoptosis were discovered for two human renal carcinoma cell lines [69].
Possessing antioxidant properties, GSH not only protects the cell from toxic free radicals but also generally determines the redox characteristics of the intracellular environment. It was found that ROS generation converts GSH to GSSG (Glutathione disulfide) through the oxidation process [72]. Oxidized glutathione is reduced by the enzyme glutathione reductase induced by oxidative stress. The ratio of reduced and oxidized glutathione forms in the cell is one of the most important parameters showing the oxidative stress level. For instance, low GSH levels were observed in cells influenced by star anise-synthesized AuNP [73]. A decrease in the GSH level corresponds to increased oxidative stress [73]. ROS generation in AuNPs-treated cells was also determined in other publications: increased oxidative stress and lipid peroxidation in MRC-5 (human lung fibroblasts); hydrogen-peroxide induced by GSH depletion is generated in HL7702 cells (human liver cell line) [74][75]. Thus, increasing ROS generation and glutathione oxidation may be the basis of AuNPs’ anticancer activity.
Physicochemical interactions of gold atoms with functional groups of intracellular proteins, as well as with nitrogenous bases and phosphate groups in DNA, are another cytotoxic action of gold nanoparticles [76]. The AuNPs influence various cell lines, for example, U87 (human primary glioblastoma cell line) is revealed in DNA degradation, condensed nuclei with fragmented chromatin structure [77][78]. Moreover, the formation of oligo-nucleosomal DNA fragments or ladder owing to DNA fragmentation is widely discussed as a biochemical marker of late apoptosis [79]. Another aspect is the accumulation of AuNPs-treated cells in the sub-G1 phase or G0/G1 phase of the cell cycle, so cell cycle regulation can play a vital role in the apoptosis induction [80]. Thus, a significant percentage of MCF-7 and MDA-MB-231 cells treated by “green” AuNPs were in the G0/G1 and S phases, which may indicate AuNP’s efficiency in inducing cell arrest at various phases of the cell cycle [78][81]. The launch of the apoptosis process–programmed cell death is one of the most important mechanisms of the antitumor effect. It is characterized by morphological changes: cell shrinkage, nuclei fragmentation, and extensive blebbing of the plasma membrane, eventually resulting in apoptotic cells formation that will subsequently be phagocytosed by macrophages [82]. Bcl-2 protein plays an essential role in the apoptosis process, which activates caspase-9 and caspase-3, triggering the apoptosis cascade (with the participation of another caspases-7,8) [83]. Besides, downregulation of p53 (protein p53) may also be a key element of anticancer activity, because it is a transcription factor regulating cell cycle and acting as a suppressor of malignant tumors formation [84]. AuNPs were demonstrated to induce the expression of both p53 and p21 in a concentration-dependent manner in MCF-7 [78]. Thereby, gold nanoparticles are capable of activating cell death through a caspase-mediated apoptotic pathway [85][86][87][88]. Nevertheless, there are still many questions about the anticancer activity of AuNPs; in addition, most studies were made in vitro and need further testing in vivo.

More
© Text is available under the terms and conditions of the Creative Commons Attribution (CC BY) license (http://creativecommons.org/licenses/by/4.0/)
Upload a video for this entry
Information
Subjects: Biotechnology & Applied Microbiology
Contributor MDPI registered users' name will be linked to their SciProfiles pages. To register with us, please refer to https://encyclopedia.pub/register :
Ekaterina Mikhailova
View Times: 67
Revisions: 3 times (View History)
Update Time: 13 Dec 2021
Table of Contents
1000/1000
Hot Most Recent