Submitted Successfully!
Thank you for your contribution! You can also upload a video entry related to this topic through the link below:
https://encyclopedia.pub/user/video_add?id=16971
Check Note
2000/2000
Clinical, Morphological, and Pathogenetic Characteristics of NAFLD
Edit
Upload a video
This entry is adapted from 10.3390/cells10112978

Nonalcoholic fatty liver disease (NAFLD) is currently one of the most common liver diseases. Unfavorable data on the epidemiology of metabolic syndrome and obesity have increased the attention of clinicians and researchers to the problem of NAFLD. The findings allow us to emphasize the systemic and multifactorial nature of the pathogenesis of liver parenchyma lesion. At the same time, many aspects of its classification, etiology and pathogenesis remain controversial.

Metabolic disorders are one of the most important problems of modern society [1]. Metabolic syndrome and related diseases are an important part of the epidemiology of chronic non-communicable diseases. Their prevalence is growing in many countries of the world, increasing the economic and social burdens [2][3].
Non-alcoholic fatty liver disease (NAFLD) is closely associated with impaired metabolic processes and is considered one of the most common liver diseases in European countries. Its prevalence among the adult population varies depending on the method of diagnosis, age, sex, and some other characteristics and, according to various data, ranges from 17% to 46% [4]. Such data roughly correspond to the occurrence of metabolic syndrome, which increases the risk of developing a severe form of the disease. NAFLD confidently demonstrates negative growth trends in parallel with the prevalence of obesity and type 2 diabetes, the key problems of modern society associated with impaired metabolism [5]. It is assumed that the increase in the prevalence of NAFLD in the coming years will make it one of the leading causes of liver diseases, requiring its transplantation [6][7][8][9]. It is important to note that NAFLD occurs not only in overweight and obese people, but also in 7% of people with normal body weight, often in young women with normal levels of liver enzymes [10][11]. These data, as well as information about excessive health care costs associated with the disease, demonstrate the importance of NAFLD as a serious health problem worldwide [12].
Non-alcoholic fatty liver disease (NAFLD) is characterized by excessive accumulation of fat in the liver and is determined in the presence of steatosis in more than 5% of hepatocytes according to the results of histological examination or with a proton density of the fat fraction >5.6% according to proton magnetic resonance spectroscopy (PMRS) or fat–water MRI (magnetic resonance imaging). NAFLD includes two morphological forms with different prognosis: nonalcoholic fatty liver (NAFL) and non-alcoholic steatohepatitis (NASH). The severity of the disease in NASH is very variable, including fibrosis, the activity of which correlates with the stage of the disease, and cirrhosis. A liver biopsy should be performed to establish the final diagnosis of NAFLD.
The diagnosis of NAFLD involves the exclusion of secondary causes and significant alcohol consumption (more than 30 g per day for men and 20 g per day for women) [13]. Alcohol consumption in doses exceeding those specified indicates alcoholic liver disease. It should be noted that a moderate amount of alcohol can also contribute to the development of NAFLD in patients with metabolic risk factors. At the same time, the overall effect of metabolic risk factors on the development of steatosis exceeds the effect of alcohol in these patients [14].
Given the close and incompletely understood association of NAFLD with impaired metabolism, as well as the lack of understanding of all mechanisms of pathomorphological and clinical heterogeneity of the disease, another term, which is believed to better reflect current understanding of the pathogenesis of this disease, metabolically associated fatty liver disease (MAFLD), was proposed in 2020 [15][16]. The use of this term, as suggested by experts, will allow leveling out the influence of other liver diseases and alcohol intake in the diagnosis, while emphasizing the heterogeneity of all fatty liver diseases, and can also help in stratifying patients in order to choose the best treatment strategy [16][17]. It should be noted that discussions regarding terminology continue, which once again underlines the complexity of the problem and the need for a better comprehensive analysis of it.
The relevance of the NAFLD problem is also due to the fact that patients may not seek medical care for a long time, and reliable tools required to confirm the diagnosis are not available to clinicians or are characterized by high cost and require qualified personnel, which is a serious problem for many countries of the world. Such conditions reduce the possibility of early diagnosis and prompt choice of an effective therapeutic intervention. In addition, NAFLD patients are more likely to have comorbidities that can present a much more severe clinical picture and are a major reason for seeking medical care. Among the most significant diseases that are associated with NAFLD are cardiovascular diseases [17]. This relationship is well demonstrated by the commonality of key risk factors and some links of pathogenesis.
It is of interest to know that there is a higher prevalence of NAFLD among patients with chronic obstructive pulmonary disease (COPD). It was found that the frequency of steatosis, NASH, and fibrosis in COPD patients is 41.4%, 36.9%, and 61.3%, respectively [18][19]. However, the data on the mechanisms of disease communication are incomplete and partially contradictory, which can be explained by the difficulties of diagnosis and variability of both NAFLD and the clinical heterogeneity of COPD. These connections are probably complex and include the involvement of impaired metabolic mechanisms, inflammation, and the resulting effects on organs and tissues of decreased pulmonary function and hypoxia (Figure 1). It is shown that the severity of NAFLD is characterized by an independent association with a decrease in pulmonary function [20]. At the same time, a greater decrease in forced expiratory volume in 1 s (FEV1) corresponds to a greater degree of liver steatosis [21]. Patients with COPD and NAFLD with severe liver fibrosis showed a higher risk of cardiovascular events than in the general population of patients with liver fibrosis [19]. 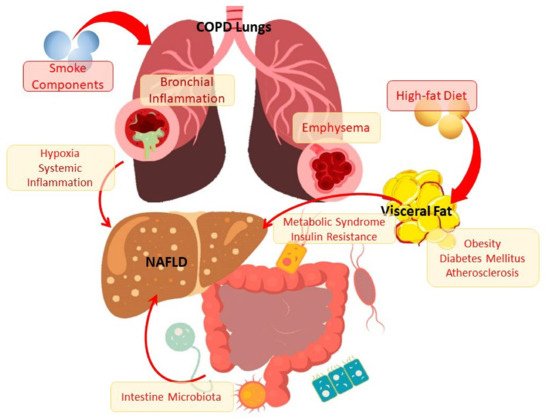 Figure 1. The scheme of the relationship between NAFLD and COPD through metabolic disorders and inflammation.

As already noted, NAFLD shows a close bidirectional relationship with the metabolic syndrome [22]. The development of a metabolic syndrome can not only precede NAFLD, but also be its consequence [23][24]. Indeed, NAFLD almost doubles the risk of developing metabolic syndrome in the next few years [18][24]. In addition, studies show that the presence of NAFLD can be considered as an independent risk factor for a number of cardiovascular diseases [25][26][27][28]. Given that NAFLD is often combined with metabolic diseases, such as obesity, type 2 diabetes, hyperlipidemia, and hypertension, such comorbidity can lead to a significant increase in the risk of mortality [6][29][30].
A key characteristic of NAFLD, highlighting the association of the disease with the metabolic syndrome, is insulin resistance, which may have several mechanisms of development [31][32]. Insulin resistance not only mediates further impairment of metabolic parameters, but may also increase inflammation in NASH, as evidenced by the frequently more severe histopathological changes in the liver in patients with type 2 diabetes [32][33].
Thus, taking into account these data, the typical phenotype of a patient with NAFLD is an overweight person. Indeed, body mass index (BMI) and NAFLD show a strong correlation. However, some data indicate the presence of NAFLD in non-obese individuals [34][35][36]. Moreover, although most of these data were obtained in Asian countries, they were described all over the world [37][38][39][40][41][42][43][44][45][46][47]. Histological differences in NAFLD in obese and non-obese patients are minimal and consist of a lower degree of steatosis in people with NAFLD without obesity and a higher degree of fibrosis in NAFLD without obesity [48].
This information allows us to expand our views on the essence of metabolic processes in NAFLD, as well as comorbid relationships of NAFLD in obese and non-obese patients. It has been shown that individuals with NAFLD demonstrate a high risk of coronary atherosclerosis, regardless of the presence or absence of obesity [49]. There is evidence that patients with NAFLD and underweight may have a higher risk of developing diabetes and cardiovascular diseases than overweight people without NAFLD [50].
Despite numerous fundamental and clinical studies, the detailed pathogenetic mechanism of NAFLD is still unclear. It is believed that an important place in the pathophysiology of NAFLD is occupied by systemic and hepatic insulin resistance, de novo lipogenesis, disorders in the structure of the intestinal microbiota, local and systemic inflammation, and oxidative stress [51][52].
The classical theory of the pathogenesis of NAFLD assumed to a certain extent a step-by-step effect on the list, which is why it was called the “two hits” theory [53]. It was assumed that the first “hit” is associated with a negative effect on the liver of obesity, type 2 diabetes, dyslipidemia, and other metabolic risk factors and leads to hepatic steatosis. The second “hit” is associated with the action of oxidative stress and pro-inflammatory cytokines and leads to damage to the hepatocellular system and inflammation of the liver [54]. It has been shown that a three-day feeding of animals with food with a high-fat content provokes the accumulation of lipids in the liver and the development of insulin resistance in the liver. It is noteworthy that these changes took place without a significant increase in the mass of visceral fat or the concentration of fatty acids in the portal vein [55].
In recent years, the “multiple parallel hits” model has been proposed as a new model of the pathogenesis of NAFLD, since many factors can act in parallel, which ultimately leads to liver inflammation [55][56]. According to this concept, multiple damaging effects, the source of which is primarily the intestines and adipose tissue, can contribute to liver inflammation [52][57].
Indeed, the research data convincingly demonstrate the correlation of the amount of visceral fat with the degree of hepatic steatosis and inflammation. This correlates well with the information that pro-inflammatory changes in adipose tissue are a frequent phenomenon in pathological obesity, and this tissue may reflect the main source of cytokines that can attack the liver, thereby contributing to its inflammation [55].