Submitted Successfully!
Thank you for your contribution! You can also upload a video entry related to this topic through the link below:
https://encyclopedia.pub/user/video_add?id=16964
Check Note
2000/2000
Biodeterioration of Polyethylene
Edit
Upload a video
This entry is adapted from 10.3390/polym12010123

Five types of petroleum-based polymers are the most commonly used to make single-use plastic materials, namely low-density polyethylene (LDPE), high density polyethylene (HDPE), polypropylene (PP), polyvinyl chloride (PVC), and polyethylene terephthalate (PET). LDPE, mainly used to make plastic carry bags and food packaging materials, is the most abundant petroleum-polymer on earth, and represents up to 64% of single-use plastics that are discarded within a short period after use, resulting in massive and rapid accumulation in the environment [1][2]. Despite recycling and energy recovery efforts, the harmful impacts of virtually “non-biodegradable” LDPE waste accumulation in landfill and in the oceans are increasing [3][4][5][6]. There is mounting evidence that micro-plastics are now found everywhere on the planet, including snow in the arctic [7]. Hence, a suitable method for disposal that is eco-friendly must be found [1][2][8].
Unlike organic wastes discarded by humans, polyethylene (PE), and other petroleum-based plastics, are extremely recalcitrant to natural biodegradation processes. The scientific literature contains a considerable number of reports on the biodegradation of synthetic plastics, and on PE in particular. Thirteen review articles on microbial and physical biodegradation mechanisms and microorganisms involved have been published since 2008 (Table 1). Although many studies have reported microbial degradation of PE, significant degradation of PE wastes has not yet been achieved at real scales. The lack of a working definition for biodegradation for polyethylene that can lead to testable hypotheses has limited our ability to develop a biochemically-based understanding of the mechanisms and processes involved in PE degradation.
Table 1. Published review articles on plastic biodegradation.
Early microbial biodegradation experiments attempted to demonstrate that microbial activity could result in changes in the physical characteristics of plastics, such as tensile strength, water uptake, and crystallinity [22]. Microbial biodegradation of plastics was first reviewed by Pirt (1980) [23]. A decade later, Albertsson and Karlsson (1990) reported a 0.2% weight loss of PE after 10 years [22]. Otake et al. (1995) surveyed changes on the surface of PE polymers that had been buried in soil for 10 to 32 years [24]. A high degree of degradation was observed for thin films of LDPE. Although areas of the PE films with severe deterioration were characterized by whitening with small holes, overall rate of degradation was very low, even after years of exposure to soil microbes.
Some scientists have surveyed the aerobic biodegradation of treated polyethylene and/or polyethylene modified by the addition of additives (“addivitated”) PE in simulated soil burial and mature compost [25][26], in natural aqueous environments in laboratory condition [27][28], or in different type of soil contain microbial consortia in real condition [29]. Others tested the biodegradation of LDPE in soil and identified the microorganisms involved [30]. Abrusci et al. [31] isolated microorganisms adsorbed on the surface of PE films buried in agricultural soil and then tested the biodegradability of thermal and photo degraded addiviated LDPE films by those organisms.
Microbial degradation assay experiments usually include isolation of microorganisms from different sources by use of conventional, culture-dependent methods to find best potential microbial power to degrade polymeric PE chain. Some researchers have isolated potential microorganisms from different type of soil (garden soil, forest soil, garbage soil, mangrove soil, soil containing agricultural PE films for soil mulching) [32][33][34][35][36]. Plastic debris, solid waste dumps sites, or landfill areas (municipal solid soil) [8][37][38][39][40][41][42], water [2][43], waste water or sewage sludge [44], oil contaminated soil [45][46], and even from Waxworm larvae [47] were the other sources for the isolation of high potential PE-degrading bacteria.
The culture method involved parameters such as same constant incubation temperature (usually 30 °C) and aerobic culture condition over 3 to 10 days [33][39]. In these experiments, a large number of bacteria were identified as belonging to a limited number of genera (Table 2), but not all of them were responsible for PE degradation. Following the initial isolation of the bacteria, the ability of individual isolates to utilize treated and/or untreated polyethylene was investigated in pure shake-flask cultures over various periods of times. These bacteria were mostly identified by the use of sequencing 16S ribosomal RNA genes after amplification by polymerase chain reaction (PCR). In the final step, biodegradation assays with PE-degrading bacteria on polyethylene particles or films was estimated by different methods and techniques discussed in Section 6.3.
Table 2. Bacteria used in biodegradation studies of polyethylene (PE) degradation. The bacteria are listed alphabetically by genus.
* W.L., Weight loss report as %.
Because of the great variety of PE materials used and the wide-range of culture conditions, comparisons of the various results of biodegradation are not meaningful. This underscores the need for standardized methods and protocols to systematically study the biodegradation of synthetic plastics.

The complete process of biodegradation has been divided into four stages: biodeterioration, biofragmentation, bioassimilation, and mineralization. However, before microorganisms can begin to attack PE, they need access points in the PE structure to start fragmentation. Thus, initially, oxidation of PE polymers occurs through abiotic process, such as exposure to ultraviolet (UV) irradiation [59] in combination with heat [60] and/or chemicals in the environment [61], without the action of microbes.
That oxidation of PE, especially oxidation induced by UV-irradiation, is usually accompanied by thermal aging, is well-established and the mechanisms of polymer transformation have been well demonstrated [59][62][63]. Previous research has reported the exposure of PE to UV-light or oxidizing agents generates carbonyl-groups in the alkane chains of PE, which are subsequently further hydrolyzed by microorganisms that catabolize the shorter PE chain reaction products (fragmentation). In this mechanism, initially, UV-radiation is absorbed by the polymer chain, which leads to radical formation. Eventually, oxygen is absorbed and hydroperoxides are formed, resulting in the production of carbonyl groups (Figure 1). Additional exposure to UV-radiation causes the carbonyl groups to undergo Norrish Type I and/or Type II degradation. Also, photo-oxidation can be initiated by impurities or pro-oxidants. UV-degradation can also begin at locations of trace hydroperoxide or ketone groups, introduced during the manufacturing process or fabrication. 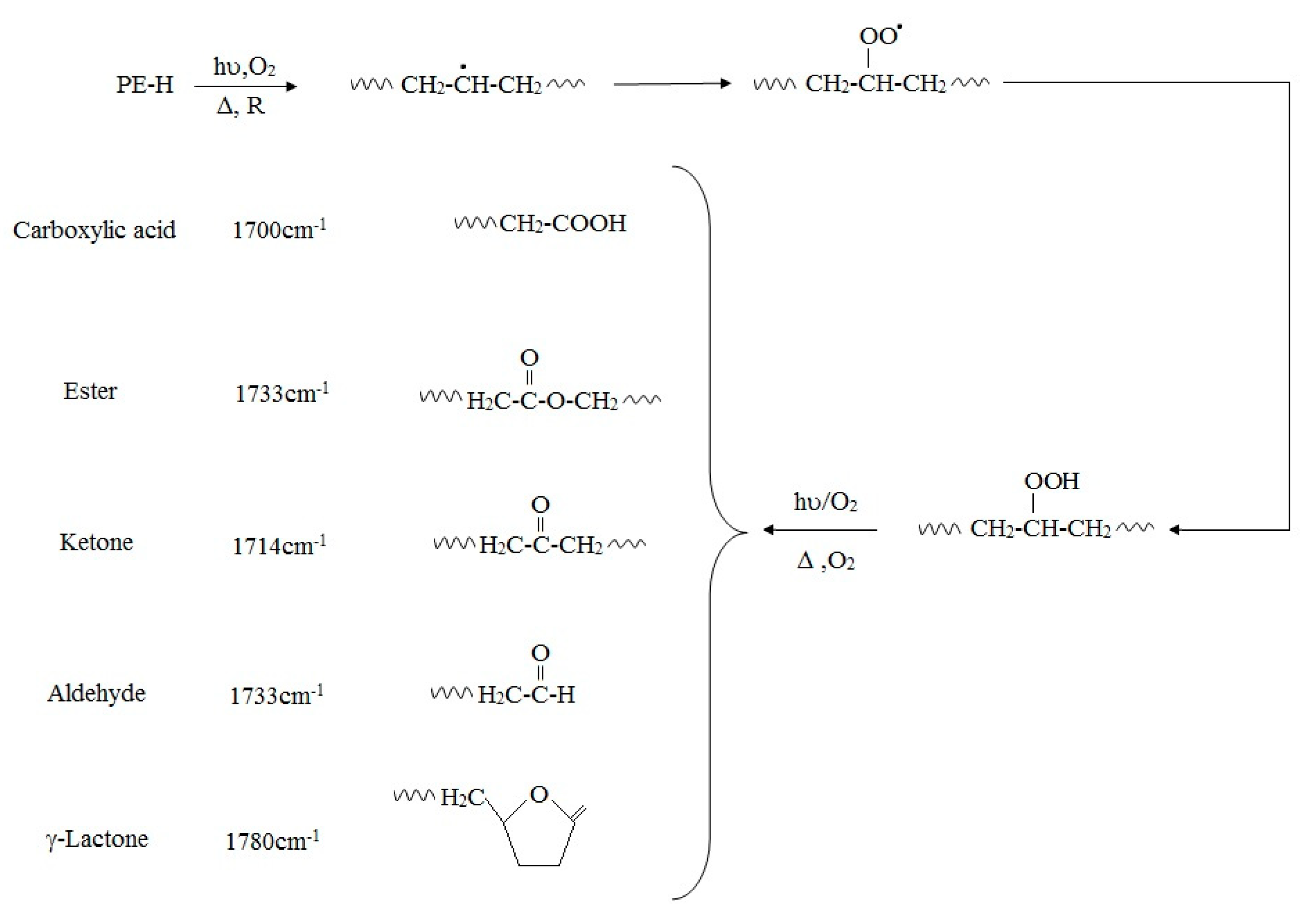 Figure 1. Degradation pathways of polyethylene containing pro-oxidant additives.
The oxidative degradation of polyolefins can be followed by measuring the level of carbonyl group adsorption by infra-red spectroscopy (IR). The measured carbonyl groups are usually expressed as a carbonyl index (C.I.), defined as the ratio of carbonyl and methylene absorbances, was used to express the concentration levels of carbonyl compounds measured by ATR-FTIR. The ratio of the absorbance of the carbonyl peak at 1714 cm−1 [64] and that of the methylene absorption band at 1435 cm−1 (CH2 scissoring peak) taken as an internal thickness band (CI = A1714/A1435). The formation of carbonyl groups is increased by photo-oxidation, but also by increasing stress even after storage in an abiotic environment. Functional groups that can be identified by FTIR analysis are shown in Table 3.
Table 3. Characterization peaks in FT-IR [50].
If Norrish Type I or Type II degradation (or both) occur, additional peaks are observed in the IR spectrum of the polymer. For example, a terminal double-bond appears at 905–915 cm−1, and it is also possible to trace ester formation. Norrish Type I cleavage yields a carbonyl radical that can react with an alkoxy radical on the PE chain. A peak appears at 1740 cm−1 in the IR spectrum if this ester formation occurs. The plot of 1640–1850 cm−1 range of carbonyl groups, as determined by the overlapping bands corresponding to acids (1710–1715 cm−1), ketones (1714 cm−1), aldehydes (1725 cm−1), ethers (1735 cm−1), and lactones (1780 cm−1) can reveal the presence of different oxidized products. Yamada-Onodera et al. [65], Gilan et al. [36], Hassan et al. [33], Yashchuck et al. [26], Abrusci et al. [61], and Vimala and Mathew [50] all report UV-light as the most applicable method of photo-oxidation in PE biodegradation experiments. Figure 1 shows degradation pathways of polyethylene and production of different carbonyl group.

In addition to the abiotic deterioration of PE materials, some microorganisms can initiate the oxidation process on their own, via the process of “hydroperoxidation”. This has been termed “biodeterioration”. However, the question as to whether PE oxidized in this manner can be ultimately degraded by microorganisms still remains to be clarified [10]. In some studies of microbial degradation of PE, different pro-oxidation additives (prodegradants) have been incorporated to the structure of polyethylene products to make them “oxo-degradable”. PE polymers containing products that render them oxo-degradable are referred to as “addiviated” polymers. Materials used to make addiviated PE polymers oxo-degradable include polyunsaturated compounds, transition metals like iron, cobalt, manganese, and calcium [31][44][57], totally degradable plastic additives (TDPA) with different commercial names [25][26][27], natural polymers (e.g., starch, cellulose, or chitosan), food grade dyes [40][43], or synthetic polymers containing ester, hydroxyl or ether groups [29] that are prone to hydrolytic cleavage by microorganisms.
In some comparative studies of the microbial degradation of PE, the deterioration of crude and addiviated PE polymers is initiated by abiotic parameters like sun-light [40][50], heat [43][56][58], or both [35][57], as well as the addition of oxidizing chemical agents like nitric acid [33][51], as forms of PE pretreatment to render the plastic more susceptible to microbial degradation. The effects of these treatments on PE structure, and subsequently microbial degradation, were then investigated and compared with samples that were not pretreated.
During the process of deterioration, a transformation in the basic structure of PE leads to the formation of oxidized oligomers and modification of the polymer. Deterioration by physical, biological, or chemical agents makes the PE fragile and sensitive to further oxidation by enzymes secreted by the microorganisms. In this stage, the structure of PE changes, but there is no fragmentation of the polymer, or reduction in molecular structure. Overall, the deterioration phase is characterized by an increase in access points for enzymes secreted by microorganisms, and a reduction of mechanical or other physical properties of the polymer.

The biodegradation process usually includes biofragmentation of the PE polymers by secreted enzymes, followed by bioassimilation of small cleavage fragments (molar mass must be less than 500 g/mol) by the microorganisms [56][66]. Many of the species shown to degrade PE are also able to consume linear n-alkanes like paraffin (C44H90, Mw = 618). The linear paraffin molecules were found to be consumed by several microorganisms within 20 days [58][67].
Microbial oxidation of n-alkanes is well understood and hexadecane, whose basic chemical structure is identical to that of PE, has been employed as a model compound for the investigation of the PE biodegradation and the relevant genes [46]. The initial step involves hydroxylation of C-C bonds to generate primary or secondary alcohols, which are further oxidized to aldehydes or ketones, and then to carboxylic acids. Thus, microbial oxidation decreases the number of carbonyl-groups due to the formation of carboxylic acids. Carboxylated n-alkanes are analogous to fatty acids, which can be catabolized by bacteria via the β-oxidation system pathway (Figure 2). However, neither cleavage of C-C bonds within the backbone of PE polymers, nor the generation of long carbon chain carboxylic acids hydrolysis products have been reported [45][46][68][69][70]. 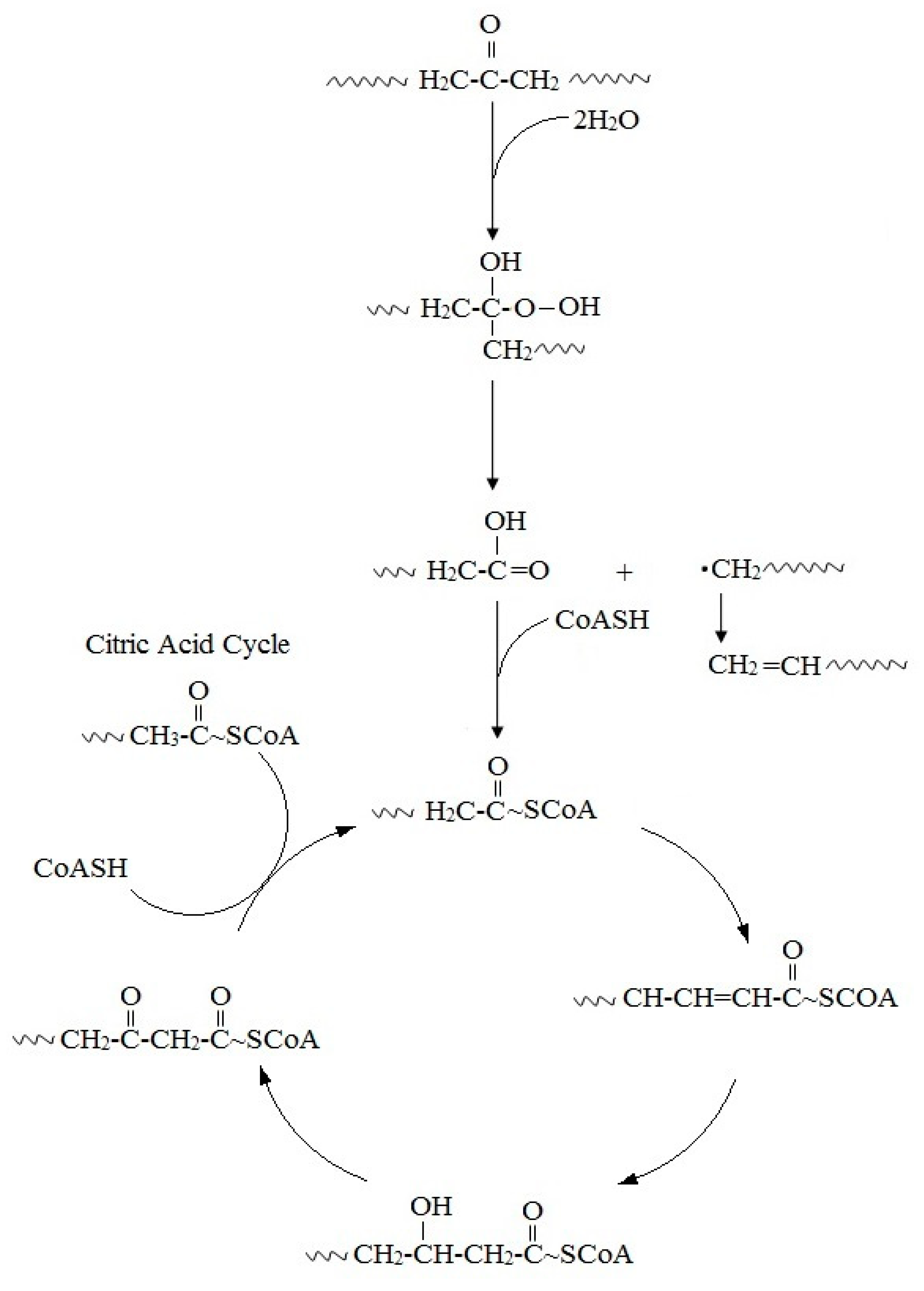 More
© Text is available under the terms and conditions of the Creative Commons Attribution (CC BY) license (http://creativecommons.org/licenses/by/4.0/)
Upload a video for this entry
Information
Subjects: Materials Science, Biomaterials
Contributor MDPI registered users' name will be linked to their SciProfiles pages. To register with us, please refer to https://encyclopedia.pub/register :
David Levin
View Times: 67
Revision: 1 times (View History)
Update Time: 10 Dec 2021
Table of Contents
1000/1000
Hot Most Recent