Submitted Successfully!
Thank you for your contribution! You can also upload a video entry related to this topic through the link below:
https://encyclopedia.pub/user/video_add?id=16937
Check Note
2000/2000
Tea and Its Active Constituents in Cosmetics
Edit
This entry is adapted from 10.3390/molecules24234277

Tea plant itself and its extracts together with their centuries-old tradition of use play an important role on the cosmetics market. In general, cosmetics products containing tea extracts rich in polyphenols have a positive effect on the skin appearance and ameliorate skin damage, erythema and lipid peroxidation following UV exposure.

Cosmetics market continues to grow globally within the last decade. The growth of the upper middle class, an increasing number of senior citizens around the world and the expansion of online beauty spending and social networks, which certainly set new trends among the consumers, are all having an impact on an increasing interest in skin care products. Natural products as the cosmetics’ ingredients are often associated with safety, marked activity and good quality. That is why a great interest in cosmetic products of natural origin can be observed [1].
Tea plant itself and its extracts together with their centuries-old tradition of use play an important role on the cosmetics market. In general, cosmetics products containing tea extracts rich in polyphenols have a positive effect on the skin appearance and ameliorate skin damage, erythema and lipid peroxidation following UV exposure [2]. An increasing number of cosmetics containing tea extracts, especially those produced using green tea infusions, but recently also black and white teas, encourage the authors to provide a review, that is focused on the application of tea in cosmetics. For the moment only a few review publications undertake the topic, however, the majority of them were published more than a decade ago. Due to this fact the authors found it necessary to prepare a more up-to-date manuscript that includes the information that have been spread in recent years, in the times of a constant and significant growth of the cosmetic industry [2][3][4]. Some of the above mentioned previously published references were also focused on the treatment of specific skin diseases only and represent rather dermatology than cosmetic applications [5][6], or they described the activity of specific tea ingredients, e.g., caffeine [7] than the extracts per se.

Tea plant is a rich source of bioactive components. According to the scientific literature it contains almost 4000 metabolites, among which the group of polyphenols constitutes a more than one-third share [8]. Tea infusions deliver approx. 2–3% flavonol glycosides (kaempferol, myricetin and quercetin), whereas their aglycones most often remain in the plant matrix upon water extraction due to their lower polarity. The flavanols present in tea infusions, also called catechins, constitute as much as 20–30% of tea’s dry matter. They are responsible for its taste: bitterness and astringency [9]. The composition of tea varies depending on the fermentation process applied. Black tea contains (−)-epigallocatechin gallate (EGCG), (−)-gallocatechin gallate (GCG), (−)-gallocatechin (GC), (+)-catechin (C), (−)-epicatechin (EC), gallate (−)-epicatechin (ECG) and (−)-epigallocatechin (EGC) [10][11][12] in contrast to green tea that is rich in EGCG—present in the highest concentration, ECG, EC and EGC [13]. The differences in the composition of these two the most common types of tea is strictly related to the production process. To obtain green tea freshly harvested leaves of Camellia sinensis are treated with hot steam to prevent fermentation and are later subjected to drying. On the other hand, black tea is produced from the leaves, which are first dried, then rolled, ground and finally fermented. This is the fermentation process that induces the oxidation of polyphenols triggered by the influence of polyphenol oxidases [14]. This process results in the transformation of simple flavonoids (e.g., catechins) into more complex structures, like thearubigins (TR), theaflavins (TF) and theobrownins (TB) [10][11][12].
Therefore, the catechins’ concentration is inversely proportional to the degree of leaf processing [15]. Their highest content was noted in green tea, then in oolong tea and in the end-in black tea, which is due to a strong fermentation process that the latter type of tea is subjected to [10][16][17]. On the other hand black tea is a rich source of TR and TF [16] and oolong tea-of theasinensins and other condensed phenolic compounds [18]. TR, whose molecular weight is from 700 to 40,000 Da, gives the brew of black tea a taste and a reddish-black color [19]. In contrast, theaflavins are responsible for a golden yellow color of the infusion [9]. Catechins are certainly the best studied compounds of plant origin. However, still not much is known about the chemical structures and pharmacological properties of the catechins’ conjugates, as they are difficult to identify and isolate from tea leaves. Some of the theaflavins have been, however, identified in tea extracts and include: 3-3′-theaflavin digalusate (TF3), theaflavin 3-gallate (TF2B), theaflavin 3-gallate (TF2A) and theaflavin (TF1) [20].
Different types of tea are also rich sources of simple phenolic compounds (gallic acid—GA, p-coumaric acid and caffeic acid) and their derivatives: theogaline and chlorogenic acid [21][22][23][24]. Other compounds present in tea include purine alkaloids (theophylline, theobromine and caffeine (theine)), amino acids, theanine [25], carbohydrates, lipids (linoleic and linolenic acids), volatile compounds, pigments (carotenoids and chlorophylls), vitamins (A, C, E, K and B) and chlorophylls [26]. It also contains numerous mineral elements such as iron, zinc, sodium, magnesium, chromium, phosphorus, potassium, titanium, manganese, nickel, copper, aluminum, silver and bromine [23][27][28][29][30][31]. The structures of tea main catechins and theaflavins were presented in Figure 1. 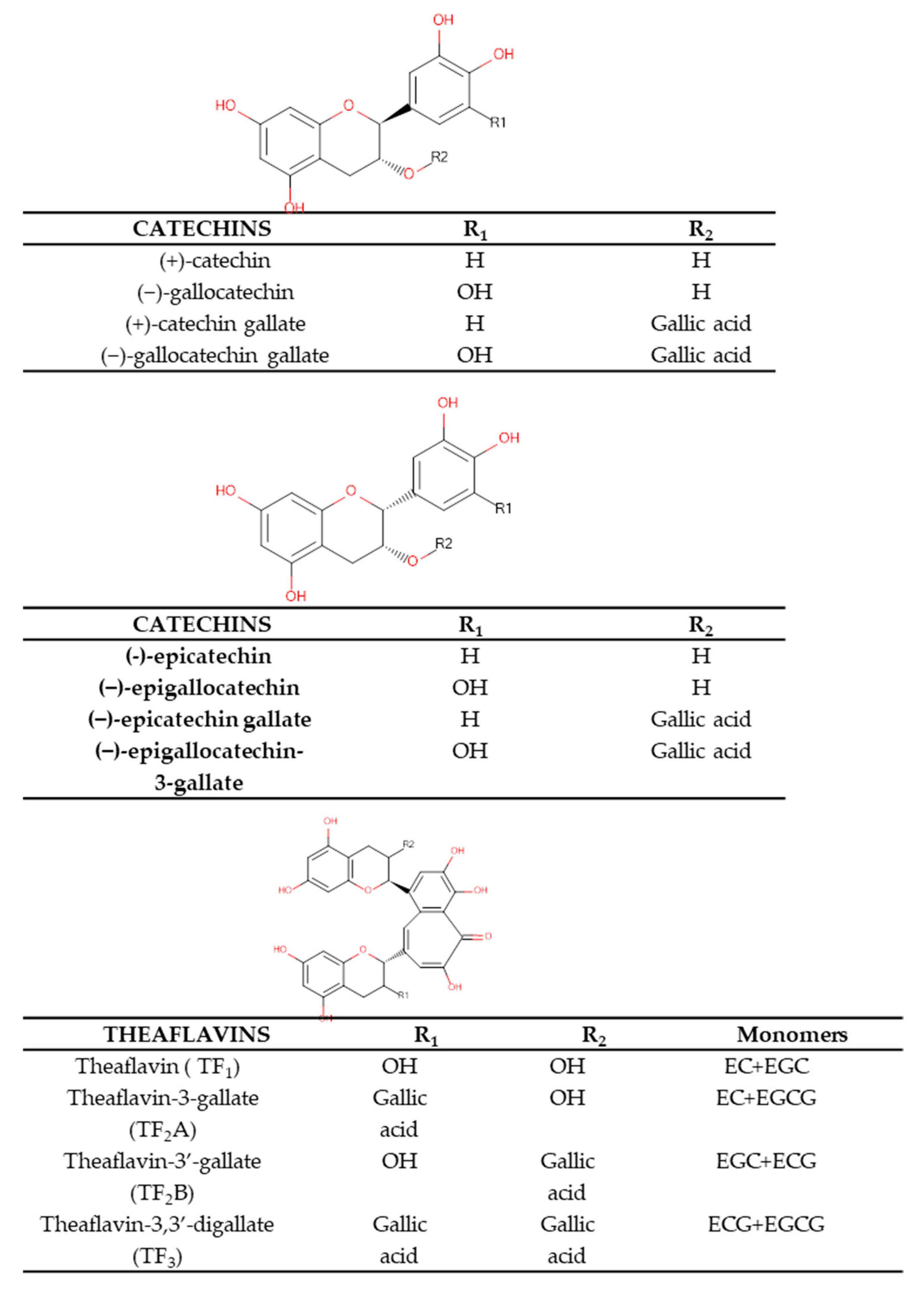 3. The Application of Tea Extracts in Cosmetics

Tea extracts possess a wide spectrum of biological activities, which makes them precious components not only for pharmaceutical applications, but also for cosmetics industry. Among these activities antioxidant, photoprotective, anticellulite, slimming, improving skin, hair and microcirculation condition properties should be underlined (Figure 2). They will be further reviewed and discussed. 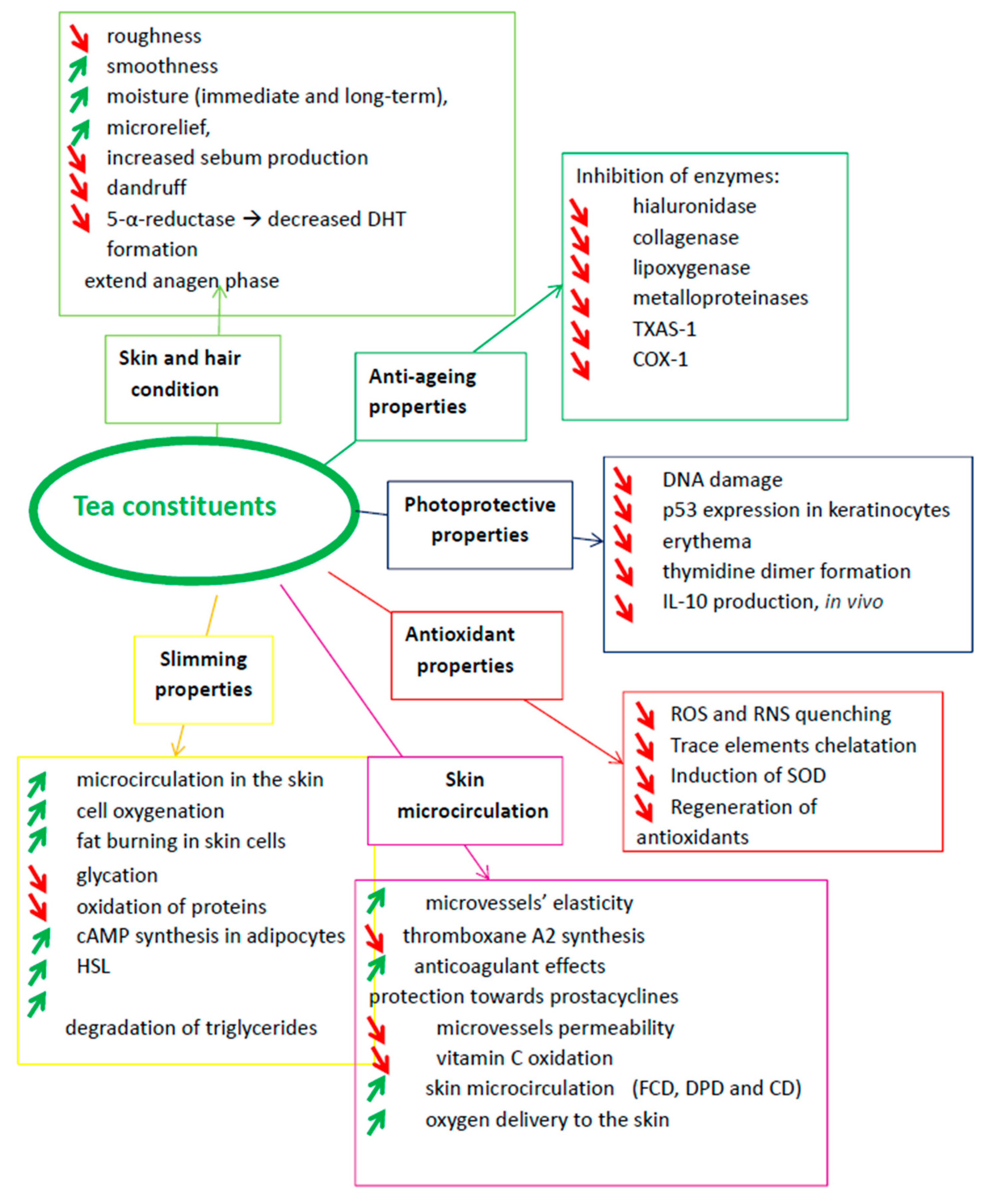 The efficacy of cosmetic formulation is strictly correlated with the skin permeability of its active ingredients. One of the most important penetration-conditioning factors is the polarity of components. According to Yanagida and co-investigators [32] the partition coefficients (K(non-polar/polar)) of green tea polyphenols can be placed in the following order: ECG (6.25) > EGCG (2.94) > EC(2.38) > C(2.33) > EGC(0.93). From all simple catechins present in tea extract EGC is considered as the most hydrophilic molecule, while ECG is characterized by the smallest polarity [32]. A study performed by Dal Belo and co-investigators [33] revealed that, after topical application of a green tea extract containing cream, EGCG was significantly retained within the skin, mostly in the stratum corneum, followed by the epidermis and dermis. This suggests a non-polar character of EGCG, as non-polar compounds tend to stay within the stratum corneum layer, and not penetrate into deeper parts of the skin, like the epidermis and dermis [34]. This is in agreement with a previous finding of Yanagida and co-workers, which also suggests a non-polar character of EGCG [32]. Zillich and co-investigators reported that both the size of the molecule as well as the hydrophobicity are the most crucial parameters regarding the ability of green tea catechins to penetrate the skin [6]. Definitely more experiments, especially in vivo and human studies, are needed to expand the knowledge on the bioavailability of tea polyphenols from cosmetic preparations.
Caffeine, a very important tea active constituent, is more often used as a hydrophilic model substance in skin penetration experiments. An in vitro study performed by Van de Sandt and co-workers [35] revealed that the maximal absorption rates of caffeine through the human skin were found to be 2.24 ± 1.43 µg/cm2/h. The authors have also proved that the maximal absorption of this alkaloid was reached 100 min after percutaneous application in the human skin [36]. Touitou and co-investigators studied caffeine skin delivery by carrier design [37]. Using quantitative skin autoradiography they have confirmed the highest concentration of caffeine (280 µg/g tissue) after 24 h in the epidermis, while the lowest amount of this alkaloid (50 g/g tissue) was detected in the dermis. However, the caffeine’s ability to penetrate from different cosmetic preparations through the skin barrier differs and is significantly correlated with the type of emulsion applied on the skin [38]. It occurs that its permeation mostly depends on the quantity of the formulation applied, rather than on the concentration of caffeine in the cosmetic formulation [39]. It was also proved that the composition of the cosmetic significantly affects caffeine absorption through the skin—water-in-oil nanoemulsion formulations were much more effective in comparison to aqueous solutions of caffeine, which was proved in Franz diffusion cells using rat skin as permeation membrane [40]. An effective way to transfer caffeine through the skin barrier was based on the application of microspheres in aqueous suspension (diameter of the microspheres: 2.8 µm, caffeine loading: 2.3 mg/g of particles). Such a formulation improved caffeine transfer across the skin, as microspheres easily penetrated the skin barrier and gathered in the receptor compartment, providing continuous alkaloid release [41][42]. Taking all into consideration it should be remembered that not only the quality of the tea extract or the concentration of caffeine, but first of all the composition of the cosmetic formulation is significant for the effectiveness of topical applications containing this alkaloid.

Tea extracts are important components of many cosmetics, including creams, moisturizing lotions, tonics, shower gels, hair products as well as cosmetic facial masks. That frequent use of Camellia sinensis extracts is due to its multidirectional effect. From all types of tea extracts, those obtained from green tea are the most widely used. These are proposed not only for young and problematic skin types, as they inhibit excessive sebum production, but can also be used by people with sensitive and allergic skin [11][43]. However, on the market also cosmetic products containing black and white tea can be found and their popularity is increasing. Due to a many producers and cosmetic forms a large number of different products can be found and their exact number is hard to estimate, also because almost every year new products appear on the market. Table 1 presents an example of 30 different cosmetics containing green, black and white extracts, including a type of a cosmetic form and manufacturer′s recommendations.
Table 1. Selected examples of cosmetic products containing tea.
According to Możdżeń and co-workers, who analyzed the plant species, which are used to produce cosmetic masks offered on the Polish market, Camellia sinensis is the most commonly used, followed by Matricaria chamomilla L. and Vitis vinifera L. [44].
After applying cosmetics containing tea extract, the skin appears more tense and refreshed, which is the result of astringent activity of polyphenols and tannins and their interaction with keratin present in the stratum corneum. This process also leads to a reduction in skin redness, irritation and reduction of swelling. The facial masks, containing mainly green tea extracts, have a disinfecting, antioxidant and toning effect. They also soothe inflammation, accelerate the healing of wounds and skin eruptions, and also close skin pores by which they reduce their visibility [44].
Tea infusions are also used as compresses, which are applied after insect bites [45] or to soothe the itching and burning around the eyes.
The latter effect results from the vasoconstriction induced by the metabolites of tea plant and is shown up as a noticeable reduction of swelling around the eyes, which is often observed during inflammation [11][45].

More
© Text is available under the terms and conditions of the Creative Commons Attribution (CC BY) license (http://creativecommons.org/licenses/by/4.0/)
Upload a video for this entry
Information
Subjects: Plant Sciences ; Dermatology
Contributor MDPI registered users' name will be linked to their SciProfiles pages. To register with us, please refer to https://encyclopedia.pub/register :
Wojciech Koch
View Times: 44
Revisions: 2 times (View History)
Update Time: 29 Mar 2022
Table of Contents
1000/1000
Hot Most Recent