Submitted Successfully!
Thank you for your contribution! You can also upload a video entry related to this topic through the link below:
https://encyclopedia.pub/user/video_add?id=1692
Check Note
2000/2000
Maharashtra Energy System
Edit
Upload a video
This entry is adapted from 10.3390/su12166596

The demand for energy across the world has been increasing in recent years due to the rapid growth of the population, including in India. This work examined the progress of non-conventional energy in Maharashtra state in detail.

Cicea and Marinescu[13] explained the advantages of renewable energy over conventional energy by considering various factors. Other works have analyzed the importance of renewable energy in improving the environment and obtaining energy sustainability[14][15]. In addition, studies have revealed that the Nordic countries—namely, Finland, Sweden, Norway, Denmark, and Iceland—are enhancing their utilization of renewable energy resources[16][17]. The European Commission supports and promotes the utilization of renewable energy sources[18]. With the year 2050 as a target, many countries are aiming for net-zero emissions of greenhouse gases[19]. Over the years, the energy sector has shown interest in the use of renewable energy resources by minimizing the use of fossil fuels to meet energy demand. Recently, various Association of Southeast Asian Nations (ASEAN) countries have made efforts to use renewable energy to overcome the drawbacks of fossil fuels[20][21]. In fact, the governments of many nations have decided to reduce the use of carbon and increase the use of renewables to ensure sustainable global development[22]. The United Nations (UN) released 17 Sustainable Development Goals (SDGs) in 2015[23]. The UN, national governments, civil society, research community, policymakers, private sector, and stakeholders are working together toward the growth of sustainable energy systems[24]. Much ongoing research pertains to the fulfilment of SDG 7[25]. Various countries adhere to the SDGs by forming cooperative structures that enable them to attain their individual targets for renewable energy production[26].

India is one of the largest countries on the Asian continent. In terms of population, it is the second-largest country after China. Because of its increasing population, the demand for energy has also increased rapidly. In 1992, the Indian Ministry of Non-conventional Energy Sources was founded; this ministry was renamed in 2006 and is now known as the Ministry of New and Renewable Energy (MNRE)[27]. In India, energy is produced from both conventional and non-conventional resources. Due to the power crisis, countries like India are facing economic demand[28]. As conventional energy resources will be exhausted in the upcoming years, India is showing more interest in the development of renewable energy. India needs to improve its utilization of renewable energy sources. As such, the government has decided to implement policies promoting environmentally friendly and renewable energy resources[29]. Apart from the policies, it is also important to raise awareness raise awareness in the society to know the importance of renewable energy resources[30][31].

Non-conventional energy systems are developed to avoid the constraints imposed by weather conditions, and resources can be used by various sources for long periods without any disturbances[32][33]. Hybrid non-conventional energy resources are developed in Australia, which involves modeling, techno-economic analysis, and load managing[27]. In one study, there were no restrictions based on daily schedules for hybrid non-conventional resources, and they worked for the whole day without any intervals [34]. In various studies, researchers have developed various controller models for the hourly distribution of non-conventional energy in daily life[35]. In particular, studies were conducted using parameters such as economic, environmental, and reversion for solar photovoltaic (PV), wind, and grid supply energy systems. The energy usage through solar cooling in the Nordic countries was also estimated[36][37]. The combination of solar plants and co-generation plants was also examined. In India, off-grid power production was designed, and it has seen a huge reduction in part of the cost[38]. The mix of renewable energy sources was studied to satisfy the needs off-grid production with stable operation[39][40]. In India, many non-urban areas are still facing energy demands and shortages, which could be solved using hybrid non-conventional energy production in a commercial way. An integrated renewable energy optimization model was used to provide electricity for villages through an integrated system[41][42]. In order to help achieve a pollution-free environment, researchers adopted a combined dispatch strategy, where a hybrid renewable energy system based on lithium ion batteries delivered optimal operational costs[43]. With a hybrid (PV-wind) system, it was found that there was a reduction of CO2 emissions by nearly 70% to 80%[44]. The growth in solar energy across various countries from 2013 to 2019 is presented in Figure 1. It is observed that the generation of solar energy has been increasing from 2017. India also stands as a fast-developing country in terms of solar energy; its rate of growth increased considerably between 2017 and 2019. 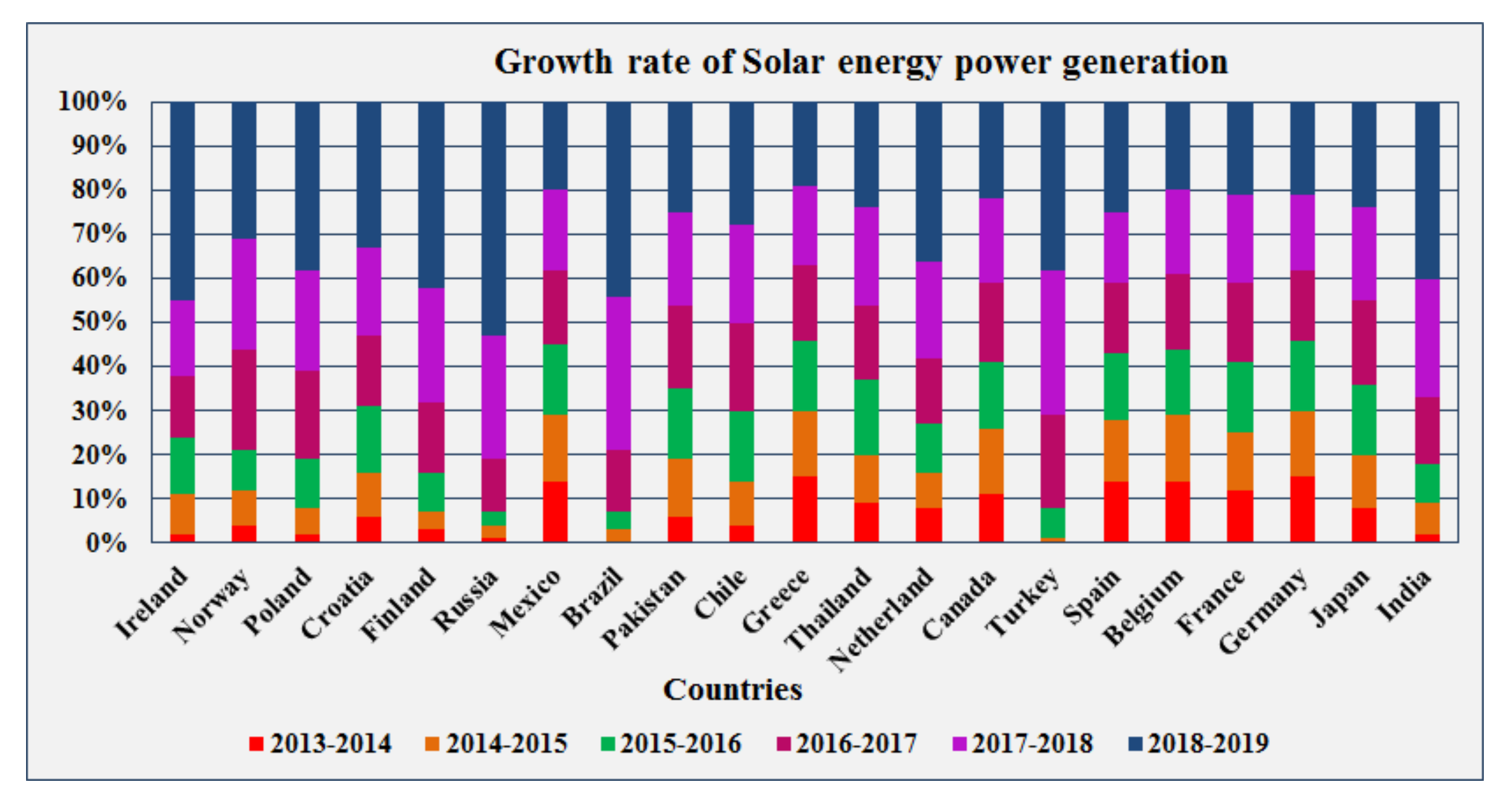 Maharashtra is the third largest state geographically and the second most populous state in India. It has the most business enterprises and employment opportunities compared to other states. Maharashtra is located in the western part of India; its global location is shown in Figure 2. Renewable energy has a 15% share of the total electricity generation capacity of the state. The current mix of conventional and renewable energy sources of the state is presented in Figure 3. The share of the installed capacity of renewable energy sources is far from conventional sources at about 9.2 GW, which is only about 22%. It consists of wind as a major stake at 4.7 GW, followed by biomass at about 2.5 GW, as given in Figure 3. The segments of solar and mini-hydro are not large in the energy mix. 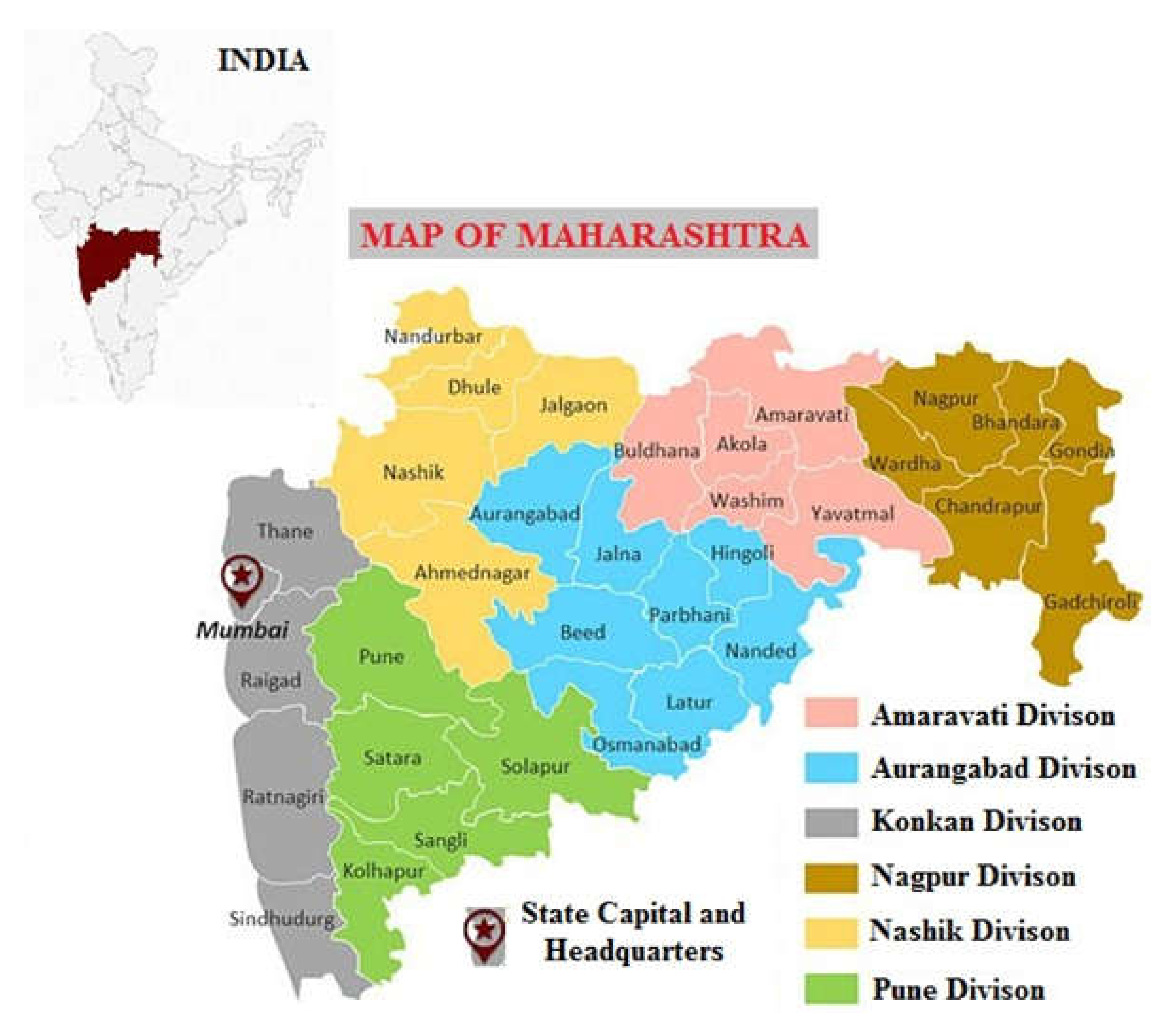 Figure 2. Location of Maharashtra on a global map.

The state has the Maharashtra State Electricity Board (MSEB), which is an electricity regulation committee. The MSEB was restructured into four companies on 6 June 2005[45]:

More
© Text is available under the terms and conditions of the Creative Commons Attribution (CC BY) license; additional terms may apply. By using this site, you agree to the Terms and Conditions and Privacy Policy.
Upload a video for this entry
Information
Subjects: Engineering, Electrical & Electronic
Contributor MDPI registered users' name will be linked to their SciProfiles pages. To register with us, please refer to https://encyclopedia.pub/register :
Narottam Das
View Times: 3430
Revisions: 3 times (View History)
Update Time: 28 Oct 2020
Table of Contents
1000/1000
Hot Most Recent