Submitted Successfully!
Thank you for your contribution! You can also upload a video entry related to this topic through the link below:
https://encyclopedia.pub/user/video_add?id=16890
Check Note
2000/2000
Antioxidant Activity of Natural Products
Edit
Upload a video
This entry is adapted from 10.3390/molecules26175301

Physical, psychological, chemical or environmental stress may provoke biological responses that can induce excessive production of reactive oxygen and nitrogen species (ROS and RNS) [1][2], which are otherwise continuously formed endogenously and contribute to the normal, oxidative energy metabolism of cells. ROS were first perceived as harmful byproducts of aerobic metabolism that may promote the onset and development of different diseases, however, their importance in redox signaling and normal cellular functioning is well recognized today. Under normal conditions generation and removal of ROS are in a fine balance. Antioxidant defense systems balance the level of prooxidants and antioxidants to maintain redox homeostasis. Disrupted redox equilibrium in favor of prooxidants will lead to oxidative/nitrosative stress. Depending on the concentration, reactivity and diffusion distance [3], ROS can react with surrounding molecules via different mechanisms, such as hydrogen abstraction and donation or acceptance of electrons [4]. The interaction of ROS/RNS with macromolecules, like proteins, carbohydrates, lipids and nucleic acids, can result in the loss or gain of function, or in the case of lipids can trigger a chain reaction of lipid peroxidation [5][6][7]. Peroxidation of lipids is of particular biological relevance as it can alter membrane fluidity, transmembrane transport and interaction of macromolecules (i.e., lipid–lipid and lipid–protein) thus impairing normal cell function or even leading to cell death [8]. Among the final products of lipid peroxidation are reactive aldehydes, such as 4-hydroxynonenal (4-HNE), which can, depending on the concentration, have a role either in the physiology or pathology of the cell [9]. In addition, reactive aldehydes are involved in various cellular processes such as regulation of cell growth, inflammation, signal transduction and apoptosis [10][11][12][13][14]. Eventually, 4-HNE can persist in the form of protein adducts being able to induce and/or propagate oxidative stress even in the absence of ROS [6][9]. Therefore, it is crucial to maintain cellular antioxidant defenses in order to avoid a rise in 4-HNE concentration from physiological to pathological levels, especially for the cells exposed to potentially harmful effects of chemical (pro-oxidants) or physical inducers (x-rays, UV-irradiation) of ROS/RNS. This is particularly relevant for skin, the largest body organ that serves as biological barrier for physical and chemical environmental factors. These factors may act as oxidants or mediators in the process of generation of ROS and RNS, and together with endogenously formed reactive species make the skin a major target for oxidative stress contributing to the onset and development of various skin pathologies. In addition, skin inflammation is associated with a number of cutaneous diseases. The formation of peroxynitrite (ONOO − ), in the reaction between superoxide and nitric oxide (NO • ), induces the level of nitrated proteins in the skin contributing to inflammation [15]. Furthermore, ONOO − can induce lipid peroxidation yielding nitrogen-containing oxidized lipid derivatives [16] and may also induce DNA strand breakage further contributing to pathophysiology of inflammation [17].

Substances that can delay or inhibit oxidation of a substrate, or that can upregulate antioxidant defense systems are defined as antioxidants [18][19]. Antioxidant defense systems found in humans are divided into two types: enzymatic antioxidants and non-enzymatic antioxidants. Enzymatic antioxidants are almost exclusively endogenously formed, while the origin of non-enzymatic antioxidants can be either endogenous or exogenous. The nuclear factor erythroid 2-like 2 (Nrf2), thioredoxin and glutathione (GSH) systems are among the major endogenous antioxidant defenses and their mechanisms of action for cellular ROS detoxification have been recently reviewed [20]. Exogenous antioxidants may be of natural or synthetic origin. Synthetic phenolic antioxidants (SPA) are the most frequently used synthetic antioxidants due to their low cost, higher stability and availability. Butylated hydroxytoluene, butylated hydroxyanisole and tert-butyl hydroquinone are among the most frequently used SPAs. SPAs are increasingly used globally in the food industry and consumer products and are unintended contaminants of the environment [21][22][23][24]. The emerging evidence stresses that long-term exposure to SPAs has adverse effects on human health [24], and the use of some common SPAs in the European Union has been restricted by several directives. Hence, there is a need to replace them with antioxidants of natural origin. Plants are good sources of natural antioxidants that can in general be classified as phenolic compounds, vitamins and carotenoids [25]. However, although many naturally derived compounds have antioxidant properties, the majority are not suitable for human use. Among the properties to consider are stability, active concentration and safety, just as with medicines and nutraceuticals. Thus, the evaluation of toxicity in the in vitro cellular models should be part of the natural products discovery workflow ( Figure 1 ). 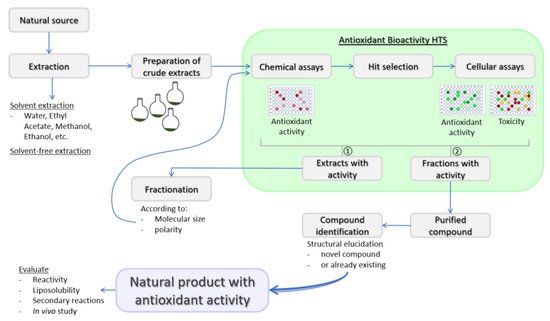 Figure 1. Workflow for the natural products discovery. Extracts from a natural source, such as a plant, may be prepared by either solvent extraction or solvent-free extraction. Solvent extraction is the conventional technique and the polarity index of solvents used will determine the composition of crude extracts [26]. Crude extracts are then examined for potential antioxidant properties by chemical antioxidant and only those identified as bioactive ‘hit’ extracts are further evaluated in the cellular antioxidant assays. Cellular assays also include a toxicity assay to evaluate safety. Extracts acknowledged for their potential antioxidant activity are fractionated based on specific properties in order to reduce the complexity of the extract and preferably isolate pure compounds. High throughput screening (HTS) of each fraction for the antioxidant activity is followed by the purification of compounds from fractions with promising antioxidant activity, structural elucidation and compound identification.

Indeed, before antioxidants can be used as food additives and/or adjuvant medicinal remedies for the integrative biomedicine purposes or as ordinary pharmacological therapeutics, their safety should be assessed by different toxicity tests as requested by the regulatory bodies, such as the European Food Safety Authority and US Food and Drug Administration [25]. Moreover, reactivity and stoichiometric factor, liposolubility and secondary reactions of new natural products with antioxidant activity should be evaluated as well [27].

3. Assays for the Measurement of Antioxidant Activity

HAT assays are based on the transfer of hydrogen atoms from antioxidant or phenolic compounds to target radicals, and the kinetics of reaction depends on the solvent used. The hydrogen donation is enhanced in aqueous solutions compared to alcohol ones [28]. However, HAT assays are not dependent on pH, while pH is important for SET assays as an increase in the pH will accelerate electron transfer [29]. Some of the popular HAT-based antioxidant assays are oxygen radical absorbance capacity (ORAC), total radical-trapping antioxidant parameter (TRAP) and β-carotene bleaching assay, while commonly used SET assays include total phenolic assay, 2,3-diphenyl-1-picrylhydrazyl (DPPH) free radical method, trolox equivalent antioxidant capacity (TEAC) and ferric reducing-antioxidant power (FRAP) assay. 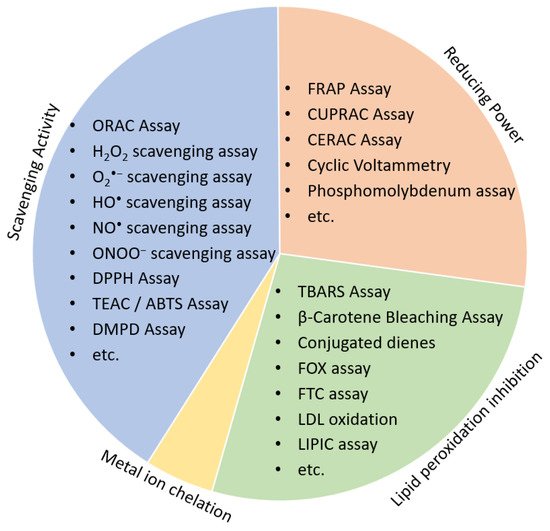 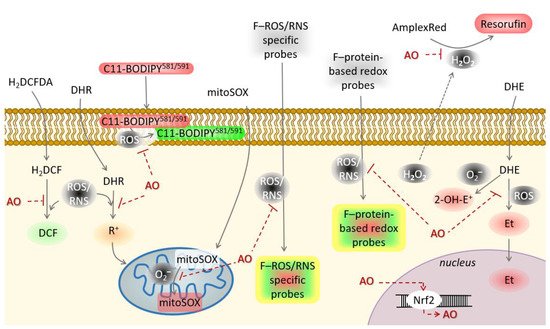 Based on all the above, two or more cellular-based antioxidant assays should be performed and interpreted in the context of data obtained from both assays to confirm the antioxidant activity of natural products.

Skin diseases are multifactorial, and oxidative stress plays an important role in the pathophysiology of many autoimmune and inflammatory diseases, as well as in other stress- and age-dependent diseases. Accumulating evidence shows that impaired antioxidant defenses [30][31][32][33][34] and increased levels of oxidants [30][33][34][35][36][37][38] are important mediators in the pathology of a plethora of cutaneous diseases ( Table 1 ).

Table 1. Imbalance in the redox system of cutaneous diseases.

The SOD enzyme that accelerates the conversion of the O 2•− to hydrogen peroxide (H 2O 2), is decreased in psoriasis [39], alopecia areata [32], acne vulgaris [35], systemic sclerosis [36] and seborrheic dermatitis [33]. Alterations in the glutathione system, one of the major endogenous antioxidant defenses, were reported for alopecia areata [32], psoriasis [39], oral lichen planus [44] and atopic dermatitis [47]. In addition, vitiligo is also accompanied by decreased antioxidant defenses [41] and elevated oxidation products [42][43] that mediate the death of melanocytes [48]. Deregulated redox homeostasis and oxidation of macromolecules further accompany cutaneous disease pathology [31][35][42][45]. Nowadays, antioxidants from plants with potential antioxidant activity are emerging as potential adjuvant therapies for cutaneous diseases in order to prevent the development of various symptoms. In the Table 2 we provide a list of some natural products with antioxidant activity and with traditional, ethnomedical applications as adjuvant treatments for cutaneous diseases, or those experimentally shown in a disease model to have beneficial effects.

Table 2. Adjuvant therapeutic approach for the treatment of cutaneous diseases.

It is obvious that numerous plant extracts possess the capacity for medicinal applications aiming at attenuating symptoms of skin diseases, preventing their occurrence and even to be used for adjuvant therapeutic remedies or nutraceuticals, However, must follow strict regulatory rules and should be proven for their efficiency as antioxidants before being used as such.