Submitted Successfully!
Thank you for your contribution! You can also upload a video entry related to this topic through the link below:
https://encyclopedia.pub/user/video_add?id=1685
Check Note
2000/2000
Carbon-Based Nanomolecules Interacting with Proteins
Edit
Upload a video
This entry is adapted from 10.3390/molecules25153555

Since the discovery of buckminsterfullerene in 1985, a discrete molecule made of 60 atoms of carbon arranged to form a Ih symmetrical hollow sphere with surprising properties, it has become a favorite subject in nanotechnology and related disciplines [1]. The truncated icosahedral fullerene sphere has a van der Waals diameter of about one nanometer and several variants of smaller and larger diameters are known including elongated-shaped molecules recognized as nanotubes [2][3]. The chemical structure of these carbon-only molecules make them better conductors of electricity than common metals on much smaller scale [4]. The interest for these nanomolecules is consequence of their light weights, making them ideal for technological applications as well as biology and related fields applications [5][6]. By the 2000s, a number of studies had explored chemical strategies to link proteins and nucleic acids to nanomolecules, including metal clusters, with the aim to engineer devices for medical and biotechnological applications [7].

Major obstacles with use of carbon-only nanomolecules for biological and medical purposes include their very poor solubility in water and poor affinity for a given protein target.

Since 2008, protein crystallography has been instrumental in understanding the nature of interactions between proteins and carbon-made nanomolecules and provided insights for chemical modifications of these materials [16][17][18]. Although structure determination of these complexes is not trivial considering the size and often the scarce solubility of these carbon-based nanomolecules, [16] use of nanomolecules sparked a strategy for crystallization of difficult biological macromolecules [19][20]. For instance, graphene wrapped protein crystals protect from dehydration and stabilize disordered surface solvent molecules, therefore improving crystal diffraction [21]. A number of fullerene derivatives were reported to inhibit important drug target enzymes as HIV-1 protease and acetylcholinesterase a key enzyme for nervous system activity [22][23][24]. A metal hydroxylated form of fullerene was designed as a potential anti-metastatic agent for pancreatic cancer [25][26]. In addition, a number of chemical approaches are available to functionalize fullerenes or nanotubes and alter their proteins binding ability [27][28][29][30][31][32][33].

Precise understanding of interactions between proteins/nucleic acids and carbon-based nanomolecules provide crucial insights to improve safety aspects concerning the use of these materials [33][34][35][36][37].

Beginning with the pioneering studies of Brian Matthews with lysozyme phage T4 mutants, aimed to understand the minimal requirements for protein folding stability and how it can be rescued by binding to nonpolar or very slightly polar ligands such as benzene molecule [38], the selection of a stable protein with high affinity for a given nano-particles became a very attractive topic [39][40]. Typical nanomolecules involve protein interfacing interactions in much larger numbers than smaller probes.

The search for proteins as a binder of a given nanomolecule is not trivial because of many factors to balance between van der Waals and solvation interactions [41]. The first well-characterized synthetic protein aimed to solubilize a carbon nanotube through its coating consists of an amphiphilic α-helix containing hydrophobic and aromatic residues used to pack against the nanotube wall to improve interface affinity [42][43]. Aromatic amino acids are known to play a central role for protein tertiary structure stability and facilitate protein folding by reducing intramolecular hydrogen bonds around large aromatic residues [44][45][46]. Peptide sequences with high affinity for carbon nanomolecules show aromatic residues such as histidine or tryptophan residues and are characterized by flexible segments [47][48]. Similar considerations can be drawn for the affinity between nucleic acid and a nanotube [49].

Earlier crystallographic studies with cyclodextrins, a family of macro-cyclic oligosaccharides, and other studies fullerenes interacting with proteins inspired use of hollow shaped host-guest carbon-based nanomolecules that could potentially bind to proteins: cryptophanes, calixarenes, cucurbiturils, tweezers, etc. [53]. For these classes of organic molecules, besides aromatic residues hydrophilic and charged residues like arginine, lysine is important for protein–nanomolecule interactions [54][55][56][57][58][59]

A widespread method used by researchers to promote protein affinity towards fullerenes (or nanotubes) is the use of covalently linked pyrenyl group anchored to the protein through surface lysines. Pyrenyl behaves as a molecular “glue”, able to stick to the nanotube wall via non-covalent π-stacking interactions [60].

Immunization of mice with fullerene derivatives represents another method of producing in vivo IgG antibodies with high affinity towards fullerene (or nanotubes) [61][62]. With this approach, papain-cleaved Fab-IgG chains were obtained and purified and they showed high affinity for fullerene, measured in 22 nM [63]. The unbound Fab-IgG chains structure was solved by X-ray crystallography (pdb entry ID 1emt) [63]. Similarly, a recent antifullerene antibody Fab-C60 was obtained from mouse immunization and the structure of the complex of heavy (H) and light (L) chains solved by X-ray crystallography (Figure 1, pdb entry 6h3h) [64]. The structure of Fab-C60 shows a binding pocket consisting of a canonical CDR region that contains various aromatic residues (Tyr50 (H), Tyr101 (H), Tyr34 (L), Trp93 (L), and Trp98 (L)) and an aspartate residue (Asp100 (L)) [64]. The segment Asp100-Tyr101 solvent exposed the conformational disorder and is postulated to facilitate fullerene binding [64]. 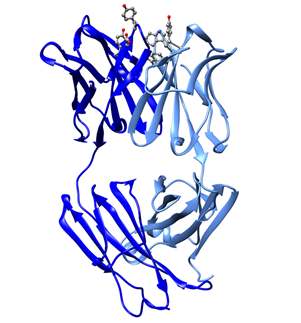 This approach was also used to select Fab chains with a high affinity towards a nanotube [65]. Another in vivo approach is the phage display technique that allows peptide selection from a library in presence of a nanotube used as target. During rounds of evolution while bacteria is infected, a peptide gene of higher binding affinity is isolated.

Among methods to select proteins with good affinity for nanotubes de novo design offered an exemplary strategy. Researchers noticed that the geometry of an ideal alpha helix matches the honeycomb geometry of graphene. So, they positioned alanine amino acids along an alpha helix to match the center of the repeating hexagonal unit of the graphene sheet. Then, they engineered interactions based on a previously designed four-helix bundle in order to wrap helices around the nanotube. As expected, the designed peptide composed by the following thirty amino acids sequence —AEAESALEYAQQALEKAQLALQAARQALKA—binds to nanotubes and its structure solved by X-ray crystallography shows an Ala-rich surface in agreement with the designed peptide (named Hexcoil-Ala, pdb entry 3s0r) [66]. Serendipitously, the designed alpha helix, called COP (C60-organizing peptide), forms a crystalline complex also when mixed with buckminsterfullerene. The crystal structure of COP (Figure 2, Table 1, pdb entry ID 5et3) shows how the peptide, organized in a four-helix bundle motif (Figure 2), recognizes the fullerene with their tyrosine amino acids. Each nanomolecule is sandwiched by two four-helix bundles forming a large superstructure (Figure 2b) [67]. Astonishingly, when tested, fullerenes or COP proteins by themselves are not conductive, but the hybrid material with this 3D lattice does conduct electricity.

Figure 2. (a) Ribbon drawing of the de novo designed protein COP (C60-organizing peptide) in complex with fullerene (pdb entry 5et3). (b) COP protein in complex with fullerene forms a large superstructure. Each fullerene molecule is bound to two four helix bundles through the side chain of a Tyr residue (green). This figure is obtained from the Molecule of the Month column “Proteins and Nanoparticles” (pdb101.rcsb.org/motm/222). Inset: fullerene molecule from the crystal structure of COP-fullerene complex (gray spheres, cif code 60C).

In summary, different strategies from in vivo selection or through de novo design are available to produce artificial proteins/peptides with high affinity to fullerenes and nanotubes. Fullerene does interact with Tyr and the methyl group of an Ala, or other aromatic residues properly placed in a protein sequence, resembling nanoparticle geometrical periodic features.

A recent nanomaterial database resource (PubVINAS) archives a total of 705 unique nanomaterials corresponding to twelve materials types [68]. At the time of this writing (July 2020), eighty of these nanomaterials are represented by carbon nanotubes, forty-eight by C60 fullerene derivatives, and twenty by carbon nanoparticles. Carbon-based nanomolecules research is rapidly growing due to potential applications ranging across biological, medical, and material sciences [69][70]. Applications involving multifunctional cyclodextrins, used for molecules delivery, received a widespread interest and are already in use for clinical purposes [71]. The gathering of carbon-based nanomolecules with biological samples has the potential for trending areas of medical chemistry including protein–protein interactions and conformational flexibility of disordered proteins for which metal based nanomolecules were explored [72].

More
© Text is available under the terms and conditions of the Creative Commons Attribution (CC BY) license; additional terms may apply. By using this site, you agree to the Terms and Conditions and Privacy Policy.
Upload a video for this entry
Information
Subjects: Biochemistry & Molecular Biology ; Materials Science, Biomaterials ; Nanoscience & Nanotechnology
Contributor MDPI registered users' name will be linked to their SciProfiles pages. To register with us, please refer to https://encyclopedia.pub/register :
di costanzo luigi
View Times: 274
Revisions: 2 times (View History)
Update Time: 27 Oct 2020
Table of Contents
1000/1000
Hot Most Recent