Submitted Successfully!
Thank you for your contribution! You can also upload a video entry related to this topic through the link below:
https://encyclopedia.pub/user/video_add?id=16777
Check Note
2000/2000
Cyclic Nucleotide (cNMP) Analogues
Edit
Upload a video
This entry is adapted from 10.3390/ijms222312879

Cyclic nucleotides are important signaling molecules involved in cellular events in pro- and eukaryotes, and analogues of this type of molecules are promising drug candidates.

Since the discovery of the first so-called second messenger molecules by Earl Sutherland and coworkers [1][2], namely, “3′,5′-cyclic adenosine monophosphate” (cAMP; Figure 1, compound 1) and “3′,5′-cyclic guanosine monophosphate” (cGMP; Figure 1, compound 2), vast knowledge to understand their chemistry, mechanisms of action and their physiological functions has been accumulated. 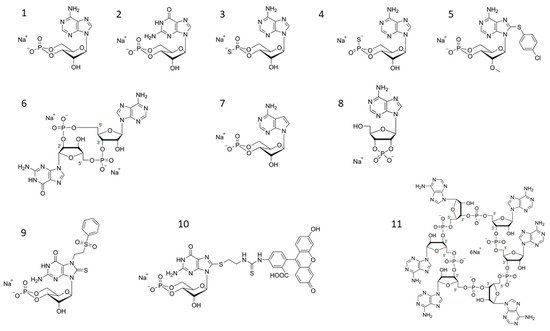 2. Practical Considerations for the Use of cNMP Analogues in Biological Systems

Despite vast accumulated and confirmed knowledge about cNMPs and their abilities (including advantages and disadvantages), cNMP analogues are often used inappropriately or at least not in an optimal manner for the biological system of interest. Below is a list of points worth considering before using certain cNMP analogues to investigate (or modulate) cNMP-regulated pathways.

It is well established that unmodified cNMPs do not notably enter a cell if applied extracellularly [4]. Purine ring modified analogues (like 8-Br-cAMP or N6,O2′-dibutyryl-cAMP short db-cAMP) are more lipophilic and enter cells more efficiently but are often prone to degradation processes (see below). An extended analysis of the hydrophobicity (lipophilicity) of cNMPs and sources for the chromatographic retention parameters used for the determination of lipophilicity can be found in [10].

Many 8-substituted-cAMP analogues are degraded by phosphodiesterase (PDE) activity present in animal sera like fetal bovine serum which many cell culture systems contain [11]. The analogue metabolites may have unwanted activities like binding to adenosine receptors [12] or being transformed via the salvage pathway, thereby interfering with RNA and DNA metabolism. Although, for example, db-cAMP ideally hydrolyzes after cell entry into the butyrate molecules and mono- or non-butyrylated cAMP, the resulting butyrates may interfere with other cellular pathways. Moreover, db-cAMP may hydrolyze before entering the cell and release one or two butyrates thereby posing potential other, extracellular, side effects. On the other hand, in biological systems where butyrate and cAMP act in an additive manner (for example in nerve cell- or adipocyte-differentiation) this butyrate effect may be desirable. Under such conditions, db-cAMP acts as the “trojan horse” carrying several biologically active components into the cells.
In case the abovementioned effects and side effects are not desired, PDE-dependent hydrolysis by 3′,5′-cyclic phosphodiesterases can be avoided by using the PDE-resistant cNMP-phosphorothioate analogues like Sp- and Rp-cAMPS and their derivatives. Phosphorothioate analogues are also more lipophilic and thus enter cells easier. However, in the case of the presence of high-affinity adenosine receptors (KD in the nanomolar range), it may be necessary to add the enzyme adenosine deaminase to the cell culture medium to convert the minute amounts (0.05%) of adenosine that may be present in Rp-cAMPS preparations to its inactive metabolite inosine [12].

As outlined above, cNMPs bind with high affinity to cAMP/cGMP-dependent protein kinases, 3′,5′-cyclic phosphodiesterases, EPAC/GEF proteins, ion channels (CNG; HCN), organic anion exchangers (OAG) and other target proteins. Each of the binding sites for cNMPs on these cNMP target molecules are different in terms of space, charge and flexibility so that in principle every modification that provides a gain of function on one of the target molecules may alter binding to another one thereby reducing the selectivity of the compound. An expression analysis of which cNMP target protein is present in a given biological system may help with the selection of the appropriate cNMP analog.
Taken together, the choice for the “ideal” cNMP analog for a certain experiment takes into account the nature of the investigated organism and/or the intended cell type targeted, combining good and fast permeability through the plasma membrane, stability against PDE hydrolysis and other enzymatic modifications outside and inside the cell with a high target selectivity and no or low toxicity.

More
© Text is available under the terms and conditions of the Creative Commons Attribution (CC BY) license (http://creativecommons.org/licenses/by/4.0/)
Upload a video for this entry
Information
Subjects: Biochemistry & Molecular Biology
Contributor MDPI registered users' name will be linked to their SciProfiles pages. To register with us, please refer to https://encyclopedia.pub/register :
Erik Maronde
View Times: 22
Revisions: 2 times (View History)
Update Time: 07 Dec 2021
Table of Contents
1000/1000
Hot Most Recent