Submitted Successfully!
Thank you for your contribution! You can also upload a video entry related to this topic through the link below:
https://encyclopedia.pub/user/video_add?id=16705
Check Note
2000/2000
Arabidopsis LSH8 ABA Signaling
Edit
This entry is adapted from 10.3390/ijms221910314

LSH is a family of transcription factors with diversified functions, the members of which, in turn, are named LSH1-LSH10. LIGHT-DEPENDENT SHORT HYPOCOTYLS 1 (LSH1 was first found in Arabidopsis in 2004, the overexpression of which can enhance the light response of Arabidopsis thaliana seedlings and show an obvious short hypocotyl phenotype. All members of the LSH family have a highly conserved Domain of Unknown Function 640 (DUF640) domain, which is also called the Arabidopsis LSH1 and Oryza G1 (ALOG) domain in the Pfam protein database.

As a sessile organism, plants need to undergo a complex internal regulation mechanism and environmental signal regulation to survive in adverse and changeable environments [1]. Phytohormone ABA is an important signaling regulator that plays a crucial role in mediating seed germination and maturation, seedling growth, stomatal movement, flowering and stress responses [1][2]. For example, ABA can regulate seed dormancy to prevent premature germination of seeds under stress conditions so that the seeds are able to germinate under suitable conditions, improving the germination rate [3]. These important functions of ABA are derived from the sophisticated regulatory network of ABA [4].
Current research demonstrates that the ABA signaling network in Arabidopsis includes five important components: ABA receptors with PYR1-like (PYL) components, negative regulator type 2C protein phosphatases (PP2C), positive regulator SNF1-related protein kinase 2 (SnRK2), transcription factors of basic leucine zippers (bZIP) and ABA-responsive genes [5]. The signal transduction of ABA in plants occurs in the following pathways. When ABA is deficient, PP2C with phosphatase activity dephosphorylates SnRK2 to inhibit the expression of downstream ABA-responsive genes activated by SnRK2, while in the presence of ABA, the complex of ABA binding to PYR/PYL/RCAR receptors inhibits the phosphatase activity of PP2C, from which SnRK2 is released. The released SnRK2 phosphorylates the downstream transcription factors ABI3/ABI4/ABI5 and ABA-response element binding factors (ABFs), thereby activating the expression of ABA-responsive genes [4][6][7][8][9][10][11]. Numerous previous studies have shown that a large number of transcription factors in the ABA signaling pathway play an indispensable role. For example, ABI3 is a B3-type transcription factor, and ABI5 is a bZIP transcription factor, both of which mediate ABA-induced inhibition of seed germination and initial seedling growth to participate in ABA signal transduction at the seedling stage [12][13][14]. Their loss-of-function mutation leads to the weakening of the inhibitory effect of ABA on seed germination [13][15]. Exogenous ABA significantly induces the expression of ABI5, the overexpression lines of which show a hypersensitivity phenotype to ABA during seed germination and early seedling development [16]. Furthermore, ABI5, as a bZIP transcription factor, can bind to the ABA binding response element (ABRE) in the promoter region of the target genes to activate the target genes’ expression [17]. Additionally, ABF1, ABF2/AREB1, ABF3, ABF4/AREB2 and other transcription factors have been reported to play important roles in the ABA signaling network [18][19], and after the phosphorylation caused by activated SnRK2, ABF/AREB directly binds to the promoter of stress response genes (such as RD29A and RD29B) to stimulate its transcriptional activity under stress conditions [19][20][21]. These reports suggest that a large number of transcription factors play an important role in the highly complex signaling network of ABA.
LSH is a family of transcription factors with diversified functions, the members of which, in turn, are named LSH1-LSH10. LIGHT-DEPENDENT SHORT HYPOCOTYLS 1 (LSH1 was first found in Arabidopsis in 2004 [22], the overexpression of which can enhance the light response of Arabidopsis thaliana seedlings and show an obvious short hypocotyl phenotype. All members of the LSH family have a highly conserved Domain of Unknown Function 640 (DUF640) domain, which is also called the Arabidopsis LSH1 and Oryza G1 (ALOG) domain in the Pfam protein database [22][23]. The DUF640/ALOG domain contains four all-α helices, the additional insertion of a zinc ribbon and a nuclear location signal (NLS) [24]. Proteins with the DUF640/ALOG domain comprise a class of specific transcription factors in plants, with characteristics of binding DNA sequence specificity, transcriptional regulation activity, nuclear localization and homodimer formation, and control plant growth and development in many aspects. Therefore, transcription factor proteins with such a domain often have specific functions [23][25][26][27]. Studies have found that LSH1 inhibits hypocotyl length in Arabidopsis thaliana in a light-dependent manner. The expression of LSH3 and LSH4 in the cells of various lateral organs, such as the cotyledon, the leaf and the flower organ, inhibits the differentiation of the boundary organ [25][28][29]. LSH9 interacts with the temperature sensor ELF3 to regulate hypocotyl elongation [30][31]. In addition, proteins of the LSH family can regulate inflorescence structure and flower organ development in other plant species [32]. LSH family genes extensively participate in different biological processes in plants, but whether its family genes participate in plant stress response remains unknown.

2. LSH8 Regulates Seed Germination and the Elongation of Primary and Lateral Root 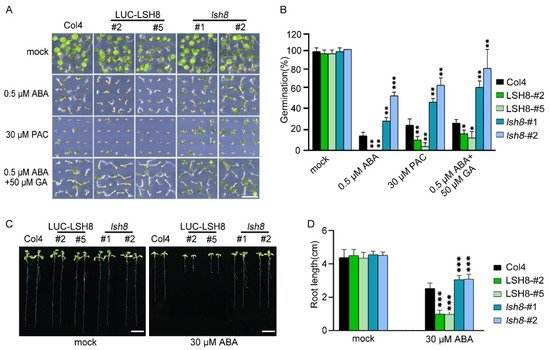 Figure 1. ABA phenotype of LSH8 overexpression and lsh8 mutant lines. (A) Germination phenotypes of LSH8 overexpression lines (LSH8-#2 and LSH8-#5), lsh8 mutant lines (lsh8-1 and lsh8-2) and wild type (Col4). Seeds were germinated and grown on 1/2 MS (mock) and 1/2 MS containing 0.5 µM ABA, 30 µM PAC, 0.5 µM ABA + 50 µM GA for 5 d, respectively. Scale bar: 1 cm. (B) Statistical analysis of germination rate described in (A). Data represent mean ± SD of at least 64 seeds. (C) Comparison of root length among genotypes on 1/2 MS with or without 30 µM ABA, respectively. Scale bar: 1 cm. (D) Statistical analysis of the differences in root length among the genotypes shown in (C). Data are shown as mean ± SD (n > 10). Asterisks in (B,D) indicate statistically significant differences compared with wild-type Col4: *, p < 0.05; **, p < 0.01; ***, p < 0.001 (Student’s t-test).
Since the LSH8-mediated ABA signaling pathway participates in the regulation of seed germination, whether LSH8 is involved in ABA-mediated seedling root elongation is another issue of concern. After growing on 1/2 MS medium without ABA for 4 days, the seeds of different genotypes were transferred to 1/2 MS medium with ABA for another 4 days. The root length phenotype and root length measurements showed that when compared with wild-type Col4, the primary roots of the overexpression lines LSH8-#2 and LSH8-#5 were significantly shorter, but the primary roots of mutant lines lsh8-1 and lsh8-2 were significantly longer, and their lateral roots were obviously increasing (Figure 1C,D), showing that LSH8 promotes ABA’s effect on inhibiting the primary root elongation and lateral root development.

3. The Prediction of Upstream Element of LSH8 and the Expression of LSH8 Regulated by ABA

In the ABA signaling pathway, ABREs can be recognized by specific transcription factors to activate the expression of ABA downstream related response genes. Most of the promoter region of ABA response genes contains conserved G-box-like cis-elements, ABREs (PyACGTGG/TC). Previous studies have shown that genes successfully activated and expressed by ABA require multiple ABREs or one ABRE bound to several coupling elements (CEs). Analyzing the data of PlantCare, we found that the promoter region of LSH8 contained two ABREs and one G-box element.
With ePlant (http://bar.utoronto.ca/eplant (accessed on 25 August 2020)), we predicted that LSH8 was localized in the nucleus. Further protoplast subcellular localization experiment showed that LSH8 was localized in the nucleus (Figure 2A). Additionally, to analyze the LSH8 expression in different tissues, we detected the root, the stem, the leaf, the flower and the silique of Arabidopsis by qPCR, the result of which showed that the highest expression of LSH8 happened in the flower and the silique and the lowest in the stem (Figure 2B). Previous studies have found that PhLSH7b of petunia, a homologous gene of LSH8 in Arabidopsis, regulates plant flowering, but the function of LSH8 in Arabidopsis is still unknown. To study the function of LSH8, we checked the public microarray data (http://bar.utoronto.ca/efp/cgi-bin/efpWeb.cgi (accessed on 13 September 2020)) and found that the expression of LSH8 may be affected by ABA during seed germination. To confirm this expression pattern, we detected the changes in the transcriptional level and protein level of LSH8 in wild-type Col4 under ABA treatment. The results showed that the transcriptional level of LSH8 started to have a gradual decrease after 1.5 h of ABA treatment (Figure 2C). With additional Luciferase assay and Western blot detection, we found that the protein level of LSH8 from LSH8 overexpression lines also showed a downtrend under ABA treatment (Figure 2D,E). The above results indicated that ABA inhibited the expression of LSH8 at both transcriptional and protein levels. 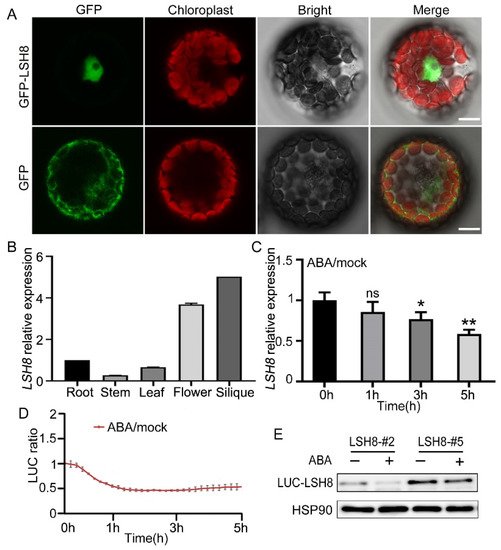 More
© Text is available under the terms and conditions of the Creative Commons Attribution (CC BY) license (http://creativecommons.org/licenses/by/4.0/)
Upload a video for this entry
Information
Subjects: Cell Biology
Contributor MDPI registered users' name will be linked to their SciProfiles pages. To register with us, please refer to https://encyclopedia.pub/register :
Jinpeng Zou
View Times: 61
Revisions: 3 times (View History)
Update Time: 03 Dec 2021
Table of Contents
1000/1000
Hot Most Recent