Submitted Successfully!
Thank you for your contribution! You can also upload a video entry related to this topic through the link below:
https://encyclopedia.pub/user/video_add?id=16681
Check Note
2000/2000
Fibrinogen and Antifibrinolytic Proteins
Edit
Upload a video
This entry is adapted from 10.3390/ijms222212537

The antifibrinolytic proteins alpha-2 antiplasmin (α2AP), thrombin activatable fibrinolysis inhibitor (TAFI), complement C3 and plasminogen activator inhibitor-2 (PAI-2), can be incorporated into the fibrin clot by FXIIIa and affect fibrinolysis by different mechanisms. Therefore, these antifibrinolytic proteins are attractive targets for the development of novel therapeutics, both for the modulation of thrombosis risk, but also for potentially improving clot instability in bleeding disorders.

The formation of obstructive intravascular thrombi remains a significant cause of morbidity and mortality worldwide [1]. These thrombi can form in arterial and venous vascular beds with the former having a rich presence of platelets [2][3]. This explains why it is mainly antiplatelet therapies that are chosen for the prevention of atherothrombotic disease, while anti-coagulants are used for the treatment and prevention of venous occlusion. However, the clinical management of arterial disease has undergone constant change over the past decade, as clinical outcome studies have shown that the combination of an antiplatelet and an anticoagulant is particularly effective at preventing atherothrombotic events [4][5]. The beneficial effects of combination therapies are not surprising given recent studies demonstrating that fibrin clot characteristics are predictors of clinical outcome in individuals at high risk of atherothrombosis [6][7][8]. Anticoagulants typically reduce fibrin network formation and can also make clots less robust, thus decreasing resistance to lysis, in turn reducing the risk of thrombotic vascular occlusion. A central difficulty in preventing vascular occlusion is the increased risk of bleeding events with more powerful anti-thrombotic agents. Therefore, there is a fine balance between inhibiting platelet function/fibrin network formation and ensuring bleeding risks are kept to a minimum. While newer antiplatelet and anticoagulant therapies are more effective at preventing thrombosis, risk of bleeding remains high. Rather than using powerful agents that have a “global effect” on platelet function and/or coagulation proteins, a more balanced strategy would be to target fibrin clot formation and breakdown, thus having agents with an improved efficacy/safety ratio. One of these potential pathways is targeting the factors responsible for hypofibrinolysis, given this is a known risk factor for thrombosis even with the use of powerful antiplatelet agents [6][7].

Altered incorporation of antifibrinolytic proteins into the fibrin network is an important mechanism that determines fibrinolysis potential [9]. Unlike the clinical use of warfarin (which inhibits synthesis of four coagulation proteins, factors II, VII, IX, and X) [10] or novel oral anticoagulants (NOAC) that inhibit factor IIa or Xa [11], the strategy of interfering with fibrinogen-bound or cross-linked antifibrinolytic proteins will offer the opportunity for a more targeted approach to improve the hypofibrinolytic environment with the real possibility of low risk of bleeding.

2. Interactions of Fibrinogen with Antifibrinolytic Proteins

This entry focuses on the proteins that interact with fibrin(ogen) and are involved in the antifibrinolytic process; these are summarized in Figure 1 and Table 1 . 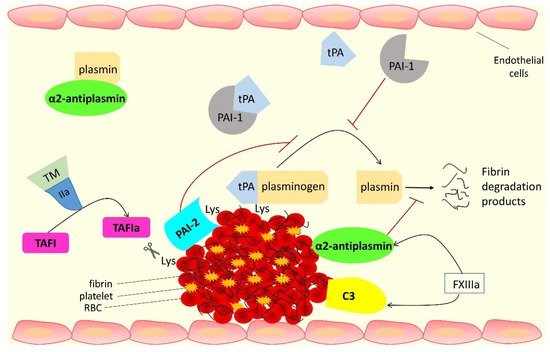 Others have investigated inhibition of two pathways, using a heterodimer diabody against TAFI and PAI-1 in mouse models of thrombosis and stroke. The bispecific antibody was able to exhibit a profibrinolytic effect with low bleeding risk [12].

Future therapeutic strategies for the treatment of bleeding disorders such as haemophilia A and B are likely to focus on extended half-life coagulation factors, although adjunctive therapies targeting the antifibrinolytic proteins have the potential to improve efficacy of the replaced clotting factors and this remains an area for future research.

A schematic representation of the therapeutic approaches involving antifibrinolytic proteins targeting hypofibrinolysis or clot instability for thrombotic or bleeding disorders, respectively, is shown in Figure 2 . 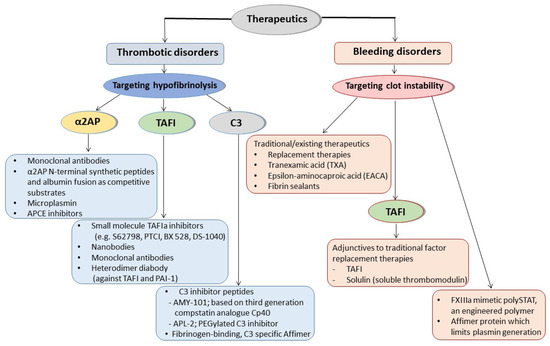 Figure 2. Antifibrinolytic proteins as therapeutic targets for thrombotic or bleeding disorders. Alpha-2 antiplasmin (α2AP), thrombin activatable fibrinolysis inhibitor (TAFI) and complement protein C3 are proteins with antifibrinolytic activity that are promising therapeutic targets in thrombotic disorders. Monoclonal antibodies that inhibit α2AP, synthetic peptides, or albumin fusion proteins that mimic the N-terminus of α2AP and act as ‘competitive substrates’, microplasmin, and antiplasmin-cleaving enzyme (APCE) inhibitors that enhance fibrinolysis have been developed and studied as potential therapeutics to reduce thrombosis. Small molecule TAFIa inhibitors, nanobodies, and monoclonal antibodies against TAFI, as well as heterodimer diabody against TAFI and PAI-1 have also been investigated. Complement C3 inhibitor peptides have been tested as drug candidates for thrombotic diseases, and Affimer technology was employed to develop fibrinogen-binding C3 specific Affimers that modulate clot lysis. On the other hand, antifibrinolytic proteins and processes contributing to clot stability are targeted in bleeding disorders. Traditionally used therapeutics for bleeding disorders mainly focus on replacement of the missing coagulation factor(s). Antifibrinolytic lysine analogues tranexamic acid (TXA) and epsilon-aminocaproic acid (EACA) are also used to limit bleeding. Fibrin sealants are used during surgical procedures to aid the maintenance of haemostasis. TAFI has been investigated as an adjunctive therapy for individuals with bleeding disorders, as has Solulin, a recombinant soluble analogue of human thrombomodulin. More recently, PolySTAT, an engineered protein scaffold that binds fibrin and acts similarly to FXIIIa, was able to strengthen clots and reduce bleeding in animal models. Fibrinogen-specific Affimers have also been developed and shown recently to represent a novel methodology for reducing bleeding.

4. Conclusions and the Future

While a large number of studies have investigated the role of fibrin-incorporated antifibrinolytic proteins in health and disease, characterization of their exact role in vascular occlusive disease is incompletely understood. This is likely related to the heterogeneity of the population studied, small numbers analysed, and/or the sensitivity of the methodologies applied. While more research in this area is needed, some of these antifibrinolytic proteins are emerging as potential therapeutic targets given their role in disease states and consistent effect on fibrinolysis. Perhaps the antifibrinolytic protein with the most evidence for use as a therapeutic target is α2AP; indeed, several approaches have been explored to modulate protein activity. Monoclonal antibodies against α2AP have been particularly effective at altering α2AP activity, and these have even been tested in phase I and phase II clinical studies, but none have made it into routine clinical practice to date. ΤAFI inhibitors have also been developed, with some showing early promising results, while there has been little investment in developing PAI-2 inhibitors given their inconsistent role in disease.

Interestingly, the use of antifibrinolytic proteins as therapeutic targets is not limited to thrombotic conditions, but also bleeding disorders, where they may prove to be effective as adjunctive therapies or even as main agents to stop blood loss.

Taken together, the molecular mechanisms involved in function of fibrin-incorporated antifibrinolytic proteins are largely understood, but more work is needed to fully elucidate the groups, or subgroups, of individuals who would benefit the most from antifibrinolytic-based therapies. While a number of approaches for modulating the function of antifibrinolytic proteins have been developed, more work is required to ensure that such therapies are effective in vivo (i.e., good efficacy/safety profile) and do not have unwanted “off target” effects. Overall, current evidence suggests that antifibrinolytic-directed therapies have the potential to be novel antithrombotic agents with a low risk of bleeding, while also being relevant to the discovery of agents that can be used in bleeding disorders. Appropriate collaborations between scientists, clinicians, and the pharmaceutical industry should help to make antifibrinolytic-directed therapies part of daily clinical practice.

More
© Text is available under the terms and conditions of the Creative Commons Attribution (CC BY) license (http://creativecommons.org/licenses/by/4.0/)
Upload a video for this entry
Information
Subjects: Biochemistry & Molecular Biology
Contributor MDPI registered users' name will be linked to their SciProfiles pages. To register with us, please refer to https://encyclopedia.pub/register :
Nikoletta Pechlivani
View Times: 27
Revisions: 2 times (View History)
Update Time: 03 Dec 2021
Table of Contents
1000/1000
Hot Most Recent