Submitted Successfully!
Thank you for your contribution! You can also upload a video entry related to this topic through the link below:
https://encyclopedia.pub/user/video_add?id=16591
Check Note
2000/2000
CTAs in Triple-Negative Breast Cancer
Edit
Upload a video
This entry is adapted from 10.3390/cancers13153875

Triple-negative breast cancer (TNBC) has been associated with worse prognoses due to the limited treatment options. Thus, there is a need to characterise new biomarkers or treatment targets to improve patient outcomes. Cancer testis antigens (CTAs) are a group of antigens that are preferentially expressed in tumours and exhibit strong immunogenicity, as such, CTAs hold great promise as potential treatment targets and biomarkers in cancer.

Breast cancer is a heterogeneous disease that can be classified based on the clinical, morphological and biological characteristics [1][2]. Triple-negative breast cancers (TNBC), a special class of breast cancers that are negative for oestrogen receptor (ER), progesterone receptor (PR) and HER2 (cerbB2), represent 9–17% of all breast carcinomas, depending on the threshold for ER, PR and HER2 positivity [1][3][4][5]. TNBC are also of high histological grade, displaying aggressive clinical behaviour with poorer prognosis and accompanied by frequent metastasis to the brain and lungs, with a shorter time to recurrence and death [3][5].

Cancer testis antigens (CTAs) are tumour antigens that are expressed normally in embryonic stem cells and testicular germ cells and minimally expressed in most other tissues. CTAs are aberrantly found in various cancers, especially advanced cancers with stem-cell-like characteristics [6][7]. CTAs were first identified in 1991 in a study showing that the presence of MAGEA1 caused resistant tumour cell clones to be sensitised to killing by autologous cytotoxic T-lymphocytes [8]. Since then, there has been an explosion of CTA-related research and the discovery of more CTAs, including NY-ESO1, which is the most successful target to date for cancer immunotherapy [9][10]. The number of CTAs identified has also increased exponentially over the years. In 2009, a database was created of about 70 families and more than 200 members of CTAs [11]. With the advent of next-generation sequencing, there has been a huge increase in genomic data. By integrating transcriptomic data from multiple databases, Wang et al. systematically identified 876 new CTAs in 19 cancers [12], and a different research group found an additional 201 new CTAs [13].

Table 1. Summary of CTAs in TNBC.

SPANX-A/C/D was discovered as an important factor for the metastasis of breast cancer cells; it was hypothesised to act via interactions with components of the cytoskeleton at the inner nuclear membrane and is required to produce actin-rich cellular protrusions during modelling of the extracellular matrix ( Table 1 ). Sperm-associated antigen 9 (SPAG9) mRNA and protein expression was found in the cytoplasm of all examined breast cancer cells, including TNBC cells ( Table 1 ) [47]. Interestingly, the downregulation of SPAG9 ameliorated the invasiveness of TNBC [47].

Testes-specific protease 50 ( TSP50 ) is an oncogene that promotes breast cancer survival, invasion and metastasis via the activation of the NF-κB signalling pathway ( Table 1 ) [56]. Knockdown of TSP50 in breast cancer cells significantly inhibited cellular proliferation [49]. The levels of TSP50 together with the expression of p65 and matrix metalloproteinase 9 (MMP9) were analysed in conjunction with clinicopathological features, such as tumour size, pathologic grade, ER and PR levels, in breast cancer tissues [48], and the majority of TSP50+/ p65+ tumours (72%) and TSP50+/MMP9+(78%) tumours were negative for ER expression and tended to be of a higher grade [48].

Sperm protein 17 (SP17) is involved in various stages of spermiogenesis, and aberrant SP17 expression has been linked to cancers such as ovarian, oesophagus, central nervous system, multiple myeloma and esthesioneuroblastoma ( Table 1 ) [57][58][59][60][61][62]. The exact role of SP17 in cancer cells has not yet been elucidated, with some reports suggesting that SP17 promotes cell–cell adhesion in malignant B-lymphocytes via interaction with heparan-sulphate and enhances cell movement and drug resistance in ovarian cells [63][64]. SP17 was preferentially expressed in breast cancer cell lines and primary breast tumours, including TNBC, compared to non-tumoural breast tissue [55]. Specific anti-SP17 antibodies were also discovered in patients’ sera, and the generation of SP17-specific, HLA class I-restricted, cytotoxic T-lymphocytes led to the death of breast cancer cells, opening the possibility that SP17 could be a valid target for TNBC immunotherapy [55].

CTAs such as NY-ESO-1, MAGE, MSLN, SPANXB1, PRAME, ZNF165, TRIM27, KK-LC-1 , SP17 and WT-1 were found to be enriched in TNBC compared to non-TNBC tissue ( Table 1 ). The specific enrichment of CTAs opens the possibility of CTAs as targets for personalised treatments or for identifying subtypes of patients with better or worse prognosis. In addition, CTAs are immunogenic, thus providing opportunities for development of therapeutic vaccines and are attractive targets for immunotherapy. Given the growing evidence of their roles in TNBC, CTAs are potential targets for therapeutic intervention. Several clinical trials are currently being conducted to evaluate the effectiveness of CTAs, such as NY-ESO-1, MAGE, MSLN, PRAME, PSCA, ROR2 and WT1, as treatment targets in breast cancers and other solid tumours. CTAs are being widely developed as cancer vaccine, T-cell immunotherapy and antibody-based therapy in breast cancer including TNBC. Other CTAs are also evaluated in clinical trials as single therapy or combination therapy in other cancer types, highlighting the attractiveness of CTAs as potential therapeutic strategy for cancers [69].

Further research could be performed to analyse expressions of CTAs with different immune infiltrates and correlate with clinicopathological characteristics, given the growing evidence of CTA having immunogenic and oncogenic properties in TNBC and promoting tumourigenesis or invasiveness ( Table 1 ). Several CTAs are co-expressed in TNBC, and further research could be performed to delineate different CTAs molecular signatures and its prognostic value for TNBC clinically. More research could be performed to understand mechanistically the underlying biological and cellular functions of CTAs in TNBC, as well as the relationships between CTAs and hormone receptor or HER2 signalling pathways. Current evidence suggests that some CTAs reduced the effectiveness of responses to chemotherapy, and a detailed understanding of the important signalling pathways in TNBC could help in designing more efficacious drugs.

A key aspect for investigation is whether CTAs are abnormally expressed in breast tissue before malignancy occurs and if they could be used as potential biomarkers for TNBC. This would help clinicians to identify women at high risk for cancer development, thus improving screening protocols for the early detection of TNBC ( Figure 1 ). 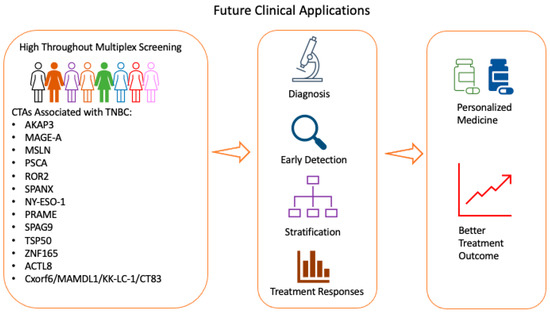 TNBC frequently expresses CTAs, and some CTA expression correlates with overall survival and prognosis. CTAs show biased expression in cancer and robust immunogenicity, thus serving as ideal targets for cancer immunotherapy. Multiple clinical trials have been conducted or are currently on-going to investigate the role of CTAs as treatment targets in advanced cancers, such as TBNC. Further research could be conducted to delineate the mechanism of action of CTAs in TNBC, increasing the efficacy of CTAs or in combination with other immunotherapies, identifying patients that would benefit most from the treatment and devising better drug delivery. With the collation of more data, CTAs may also be incorporated in routine screening protocols for TNBC.