Submitted Successfully!
Thank you for your contribution! You can also upload a video entry related to this topic through the link below:
https://encyclopedia.pub/user/video_add?id=16548
Check Note
2000/2000
Gut-Microbial Metabolites and Probiotics in Type 2 Diabetes
Edit
Upload a video
This entry is adapted from 10.3390/ijms222312846

Type 2 diabetes (T2D) is a worldwide prevalent metabolic disorder defined by high blood glucose levels due to insulin resistance (IR) and impaired insulin secretion. Disturbances of gut microbiota have been widely found in T2D patients and contribute to the development of IR.

Type 2 diabetes (T2D) is characterized by fasting hyperglycemia resulted from the inadequate secretion of the glucose-lowering hormone insulin and/or insulin resistance (IR). Primarily driven by overnutrition and sedentary lifestyles, T2D is a major global health problem in both developing and developed countries [1]. The high prevalence of IR in T2D makes IR become a predictor for the development of T2D and also an ideal therapeutic target to maintain glucose levels.
Growing evidence suggests that the gut microbiome is an important factor for the pathogenesis of IR and T2D [2]. The gut microbiota is capable of utilizing undigested and unabsorbed food components, thereby yielding bioactive metabolites from the metabolism of carbohydrate, protein, choline and primary bile acids. Many studies have pointed out that these metabolites play critical roles in the development of IR and T2D [3]. The proteolytic fermentation of gut microbiota yields products including indoles, phenols, p-cresol, hydrogen sulfide, branched-chain fatty acids, ammonia and polyamines. Some of them may be either beneficial or detrimental to the gut and metabolic homeostasis of the host [4]. The composition and structure of gut microbiota could be of interest to determine the effects of microbial metabolites on metabolic diseases [5].
Probiotics, referring to “live microorganisms which when consumed in proper amounts confer beneficial effects on the host”, has been used as a therapeutic tool for the treatment of IR and T2D [6]. Both animal and human data regarding the efficacy of the probiotics have been reported, while some of the results are contradictory. Several reasons, such as the use of probiotics strains, dosage and duration and study design, could be attributed to the differences in these studies.

1.1. Gut-Microbial Metabolites and Their Roles in the Development of T2D

Microbial metabolites derived from dietary components (e.g., dietary fiber, cholesterol, amino acids) are involved in the development of metabolic diseases including IR and T2D [7]. Among dietary components, carbohydrates are fermented by microbes in the proximal colon, while the fermentation of protein mainly takes place in the distal colon; the latter occurs as the more easily digested carbohydrates are depleted, where little is known about the microbial networks that produce bile acids, choline, saccharolytic and proteolytic metabolites. Briefly, the fermentation of dietary fiber produces high amounts of short-chain fatty acids (SCFAs), lactate, succinate and gases, such as methane and carbon dioxide in the proximal colon [8]. In contrast, residual peptides and proteins, bile acids, and choline are fermented in the distal colon [9]. Compared to the fermentation of carbohydrates in the proximal colon, the fermentation products in the distal colon seems to be more diverse, including the following: (1) bacterial toxins such as lipopolysaccharides (LPS); (2) gaseous products like methane, carbon dioxide, and hydrogen sulfide; (3) bile acids (BA) products like deoxycholate and lithocholate; (4) branched-chain amino acids (BCAAs) and products like branched-chain fatty acids (BCFAs) isobutyrate, 2-methylbutyrate and isovalerate; (5) aromatic amino acids (AAAs) products like phenolic, indolic, skatolic and p-cresolic compounds as well as ammonia and polyamines and (6) choline products like and dimethylamine (DMA) and trimethylamine (TMA); (Figure 1). 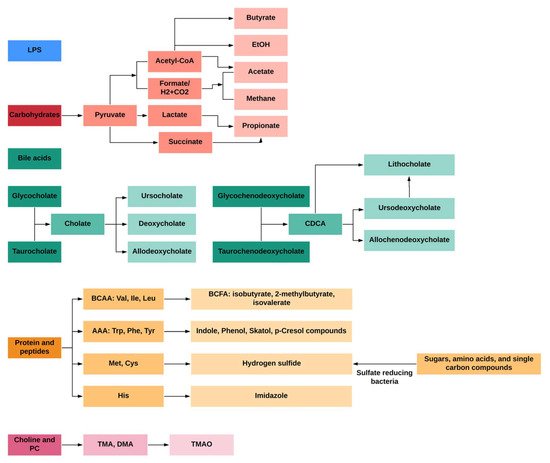 Figure 1. General profiles of gut-microbial metabolites from different dietary and endogenous components in humans.
Over the past decades, the gut microbiome has emerged as an important “organ” regulating energy metabolism in the host. Abnormalities in gut microbiota composition and function have been found to contribute to disruptions of host metabolism in T2D, including insulin-desensitizing effects on metabolism in adipose tissue, skeletal muscle and liver [10][11]. Studies have shown the gut microbiome significantly affects metabolic signatures of T2D subjects [12]. Many untargeted and targeted metabolomics studies on subjects with T2D have been reported. Although these studies were performed in different populations (Asians, Europeans and Americans) using different metabolomics approaches, they have identified several similar patterns of metabolome in T2D. First, metabolomics is useful in discriminating T2D patients from subjects with pre-diabetes and healthy subjects [13][14][15]. Secondly, numerous untargeted and targeted metabolomics studies have determined the changes of gut microbial metabolites in T2D, showing the gut microbial metabolite-related metabolic pathways are significantly changed in T2D. Figure 2 explained the role of microbial metabolites in IR and T2D. 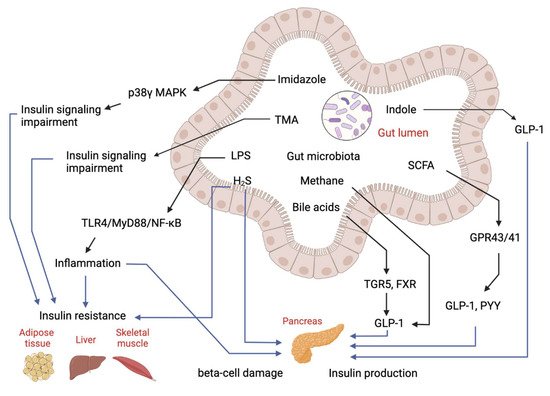 1.2. Treatment of T2D by Probiotics 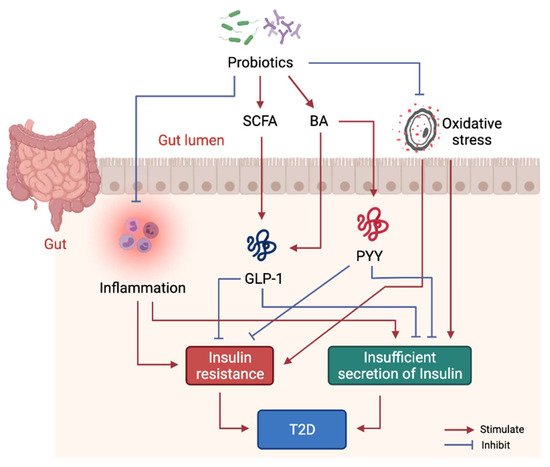 With the development of high-throughput sequencing of gut microbiota, scientists and pharmacological companies are mining small-molecule drug discovery programs using conventional drug discovery and novel synthetic biology approaches. Functional metagenomics have helped investigators identify bioactive molecules and targets, followed by the identification of homologous gene families [42]. An important family of G protein-coupled receptor (GPCR) ligands namely N-acyl amides produced by gut microbiota is shown to be agonists of receptors that have important functions for gastrointestinal and metabolic diseases, such as the endocannabinoid receptor GPR119 [43]. Another study used a novel approach combining computational and synthetic biology and characterized a series of microbiota-derived metabolites that can inhibit host proteases [44]. Moreover, a “chemistry-forward” approach of screening of GPCR ligands from gut microbiota metabolomes has revealed gut microbes produce ligands for many GPCRs and the microbiota-derived GPCR ligands have a profound impact on host physiology [45]. Such approaches used for mining gut microbiota-derived metabolites and novel compounds provide a potential strategy for discovering drugs to treat T2D.

Current probiotic supplements recommended for diabetic patients are mainly Bifidobacterium spp., Lactobacillus spp., and yeasts, which are culturable, aerotolerant and can be produced in an industrial scale [46]. By contrast, the novel probiotics for T2D include important gut bacteria in human gut which are reduced in T2D. However, it is difficult to culture these gut bacteria that are extremely sensitive to oxygen, which presents a great challenge in terms of isolation, cultivation and industrial production and formulation. Unlike the common probiotics, the GPs directly from human may also require stricter evaluation procedures in terms of safety and efficacy, which may need new drug approval procedures according to the FDA.

Besides of probiotics, modulation of gut microbiota can also be achieved using prebiotics. Prebiotics is a mixture of nondigestible food ingredients that promote the growth of beneficial microbes and suppress growth of pathogenic microbes in GI tract [47]. It brings numerous benefits to the host including normalization of GI pH value, modulation of immune system, reduction of hyperlipidemia and improvement of cation ions absorption [48]. Several mechanisms of prebiotics action on gut microbiota and host have been identified so far. First, the production of beneficial microbial metabolites (SCFA) by beneficial microbes, such as Bifidobacterium and Lactobacillus, is promoted by prebiotics [49]. Second, prebiotics supplement suppresses endotoxin level by inhibiting the growth and colonization of harmful bacteria [50]. Third, prebiotics improve cation ions absorption possibly by regulating pH value in GI tract [51]. Prebiotics can be used as a supplement or additional support for probiotics. The complementary symbiotic comprising probiotics plus prebiotics can be more effective than probiotics formulation alone in promoting human health.

FMT is an interesting approach to modulate gut microbiota and has been used to correct gut microbiota dysbiosis in clinical trials. FMT from lean donors has been implanted to obese subjects, after which metabolic syndrome and insulin sensitivity were improved by FMT, suggesting modulation of gut microbiome could be considered as a novel therapeutic target for the treatment of IR [52]. The reasons for the beneficial properties of gut microbiota could be attributed to its enhancement of levels of gut microbial metabolites levels including SCFAs and BAs [53]. Studies also found that FMT treatment does not show beneficial effects on subjects with severe IR, suggesting manipulating gut microbiota may only help maintain the glucose level and insulin sensitivity in the early stage of T2D [52]. Nevertheless, FMT is a potential personalized approach for alleviating glucose intolerance and IR in metabolic syndrome and T2D.