Submitted Successfully!
Thank you for your contribution! You can also upload a video entry related to this topic through the link below:
https://encyclopedia.pub/user/video_add?id=16510
Check Note
2000/2000
Family Entrepreneurship
Edit
Upload a video
This entry is adapted from 10.3390/su132212801

Families with dependent children represent a significant proportion of the world’s population. Children and families form the most important emotional bonds in human society, and it is these social relationships that, in part, drive demand and supply in tourism. In recent years, there has been increasing focus on ‘the tourist’ and experiences of children, families, and intergenerational wellbeing, e.g., [1][2][3]. However, the bulk of research has ignored the family-related dimensions of tourism businesses [4]. The role of children, especially, is missing in tourism entrepreneurship debates [5]. Nonetheless, entrepreneurship scholars have studied the role of the family in entrepreneurial activities e.g., [6]. Some entrepreneurship scholars recognized the unique characteristics of family firms and developed the concept of family entrepreneurship to explore the role that a family plays in family businesses, e.g., [7][8][9][10]. Although tourism research has analysed entrepreneurship and family businesses in tourism [4], the role that the family plays in tourism and hospitality businesses has remained limited.

Family entrepreneurship in tourism/hospitality is defined as the interaction of the family system within a tourism/hospitality business. For example, researchers found different types of family relationships are affecting the firm performance. Adjei et al. [11] found that the relationship between the entrepreneur and their children is the main factor in the context of firm performance. Additionally, Bakas [5] emphasises that children play an important economic role in tourism, becoming socialised and educated into the role of entrepreneurs by their parents. However, what is lacking in the family entrepreneurship literature in tourism and hospitality is the way in which children influence the entrepreneurship discourse. Children are generally viewed as vulnerable and in need of protection and hence, they are often gate-kept out of research. However, this reflects a narrow, developmentally-determined approach to understanding children’s capability, which ignores the important economic and social role they can play in family businesses [12][13].

Whilst there are methodological and ethical issues to consider when doing research with child participants in tourism and hospitality [14][15], social science researchers have been involving children in research for decades. This focus on the child has not been carried over into the tourism/hospitality field. Although recent research activities are becoming more inclusive of children as tourism and hospitality consumers, e.g., [16][17][18][19], there is still a lack of research on children as tourism/hospitality suppliers. A recent systemic review into host-children revealed that, apart from limited research into child sex workers, other issues related to children as workers have been neglected [20]. This lack of research extends more broadly to children in host communities or those who live and work in tourist destinations [21][22].

The exclusion of children is likely connected to pervasive ‘protectionist’ approaches to child labour discourses and the stigma that currently surrounds children’s work. The term ‘child labour’ is, in and of itself, problematic given it has emerged to refer prevalently to exploitative and hazardous work that interferes with a child’s development and education [23]. This is compounded by the way global reporting systems conflate estimates of children working within the family unit and in microenterprises with work that ‘by its nature or circumstances, is likely to harm children’s health, safety or morals (p. 18)’ [24]. The latest global estimates from the International Labour Organisation (ILO), for example, show that 160 million children were in ‘child labour’ at the beginning of 2020, and 79 million of those children were involved in dangerous work, albeit no mention of tourism or hospitality is made [24]. These protectionist discourses fail to recognise that children’s labour has been critical to economies historically (for example in Africa) and that scholars have tended to treat child workers as invisible [25].

Josefsson and Wall [26] argue that, against the backdrop of global policymaking, which is advocating for the elimination of child labour, some child advocates, and children themselves, have led grassroots movements to argue for children’s rights to contribute to their families, particularly in cases of extreme poverty in countries in the Global South. The African Movement of Working Children and Youth (AMWCY) is one of many emerging grassroots movements that have been formed by children themselves, NGOs, and child advocates to argue for a culturally specific interpretation of children’s working rights. Terenzio [27] argues this movement ‘tries to encourage children to appropriate their rights by rebuilding them through their own experience (p. 69).’ Child and youth labour unions have, in some cases, been successful in lobbying for child rights to work including fair wages, limited working hours, legislation against exploitation, and recognition of their worth and dignity [28][26][29]. This is in line with scholarly developments which point to the decolonisation of childhood itself, moving away from universal understandings of childhood that fail to reflect the diversity of children’s experiences across familial, social, and cultural contexts including within and across minority and majority world contexts [30][31].

Given the complexity of the issues surrounding child labour and the prevalent ‘protectionist’ views of children involved in the tourism and hospitality industry as suppliers [32], the discussion presented in this paper focuses primarily on children in tourism/hospitality family entrepreneurship to ascertain whether children’s own views of their work in the family business have been explored in the literature.

To explore academic scholarship at the intersection of family entrepreneurship, tourism/hospitality, and childhood, we employed a systematic scoping review methodology. Scoping reviews are particularly helpful when mapping relevant literature at the intersection of multiple fields of research and identifying future research priorities [33]. We employed the Extension for Scoping Reviews’ approach (PRISMA-ScR) (Based on the Moher et al. ’s (2009) Preferred Reporting Items for Systematic Reviews and Meta-Analyses (PRISMA)) to identify appropriate articles to include in our review [34]. Following our previous work with this methodological approach, we approached the scoping review in a systematic, replicable, and transparent way, including the following steps: (1) developed a well-defined review question; (2) identified relevant databases to search; (3) identified relevant articles; (4) selected studies for inclusion in the analysis phase; (5) finally analysed and synthetised the information.

In Phase 2, we developed our search protocol which was guided by a university librarian specialised in systematic literature reviews. In the first instance, a series of keyword combinations (n = 25) were tested to explore the most appropriate way of sourcing studies which addressed our review questions. The inclusion of the word ‘labour’ or ‘labor’, for example, was problematic, as articles tended to address child labour and human rights issues rather than family entrepreneurship per se see, for example [35]. It was thus excluded from the search, however seminal articles which focused on the emotional labour of children in tourism and hospitality businesses were included manually in our sample [36][37]. Likewise, the inclusion of composite words such as ‘family-owned’ or ‘family-based’ was not deemed necessary as these keywords were picked up individually.

In Phase 3, we searched the databases, which produced 193 records in EBSCO and 65 in Emerald. These studies were exported to EndNote, a reference and bibliographies management software. After removing duplicates, 232 records were screened. In the first instance, the titles and abstracts of the 232 were assessed for eligibility against our inclusion criteria. In this phase, 181 records were excluded as not in scope (see Figure 1). Often, systematic database searches capture irrelevant articles, which can be excluded simply by reviewing titles and abstracts, see [38]. 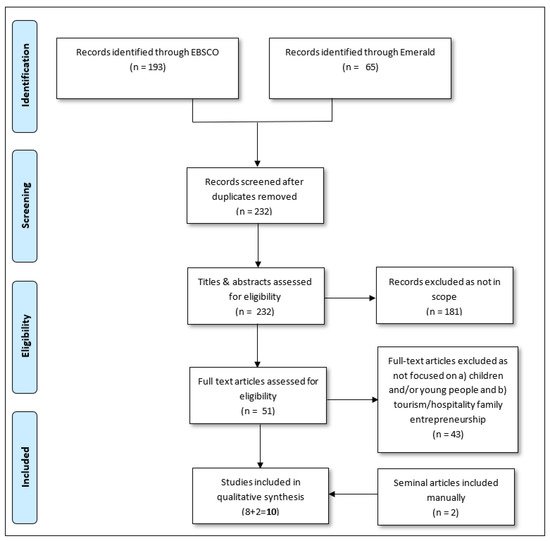 In Phase 4, the full text articles of the remaining 51 articles were accessed and screened for eligibility, and a further 43 articles were excluded as they did not specifically focus on the role of children in tourism and/or hospitality entrepreneurship. An example is the Ilberi et al. [39] study, which discusses the family status of entrepreneurs (e.g., couples with children) but does not engage with the role of children in supporting the family business, see also [40]. The Tan et al. [41] study, in contrast, addresses the nurturing of transgenerational entrepreneurship in ethnic Chinese small, and medium-sized, family enterprises. However, it does not specify whether this is in the context of tourism or hospitality. Likewise, the study by El-Far and Sabella [42] is interesting as it problematises the dominant conceptualisation of entrepreneurship by demonstrating how marginalised Palestinian women and their children engage in informal entrepreneurial activities (e.g., street vending) as a form of empowerment and resistance to economic adversity, social marginalisation, and political (colonial) domination. However, the article does not discuss whether this is situated in the context of tourism. At this stage, seminal articles that were missed during the systematic database search were also included manually (n = 2).

This entry reports on a systematic scoping review of peer-reviewed academic literature in the areas of tourism and hospitality family entrepreneurship. Specifically, it explored how, and to what extent, existing literature paid attention to the roles of children and how children are constructed in this literature, including whether their voices and lived experiences are reflected in the studies. This review paper directly contributes to one of the themes of this Special Issue by exploring the ‘silent voices’ within family entrepreneurship in tourism and hospitality as part of a broader social justice agenda to promote children’s rights, their participation, and wellbeing in the tourism industry. As such, it provides new insights into children and families in tourism/hospitality, from a supply side perspective, and highlights previously understudied aspects of tourism. By doing so, it seeks to challenge researchers to consider a more comprehensive view of family entrepreneurship, one that includes the voices of children.

In the sample of studies analysed in this entry, children are viewed and constructed as ‘objects’ and recipients of skills, knowledge, and inheritance, while neglecting to focus on children’s own interpretation of reality and lived experiences of family entrepreneurship in tourism and hospitality. Much progress has been made to meaningfully include children’s perspectives and voices when it comes to the demand side of tourism e.g., [3][17][18][43]. However, Gram’s [16] critique of children’s passivity still rings true when it comes to the supply side of tourism and hospitality, including family entrepreneurship. Only limited scholarship has focused specifically on the role of children as active social ‘agents’ who contribute to the family business through household labour [5] and emotional labour, often subverting and resisting their roles in interactions with guests [36][37].

The neglect of children’s lived experiences of tourism and hospitality family entrepreneurship is likely connected to ‘protectionist’ views of child labour and the stigma currently associated with working children. This is part of a general invisibility of child workers, despite children’s labour having been historically critical to economies [25]. While international policy generally condemns child labour and aims to eradicate child work in all its forms (e.g., United Nations’ Sustainable Development Goal 8.7), there is little data collected to document children’s own interpretation of work, particularly within the family, whether through formal or informal employment in the tourism and hospitality sectors. Bromley and Mackie [23] argue that such ‘universal condemnation’ of child labour requires a more ‘flexible approach, which recognises the benefits of children’s work and embraces supportive protection for children engaged in the lighter forms of work (p. 141)’ such as when children take on the role of ‘replacement’ entrepreneurs in the family business over the summer holidays [5]. There has been a call for more research on children’s own perspectives and lived experiences of work [23][28][44] and recognition of their rights to protection from work that is harmful to their wellbeing [23][44].