Submitted Successfully!
Thank you for your contribution! You can also upload a video entry related to this topic through the link below:
https://encyclopedia.pub/user/video_add?id=16481
Check Note
2000/2000
Multifunctional Cyanine-Based Theranostic Probe
Edit
Upload a video
This entry is adapted from 10.3390/ijms222212214

Cancer is one of the leading causes of death in the world. A cancer-targeted multifunctional probe labeled with the radionuclide has been developed to provide multi-modalities for NIR fluorescence and nuclear imaging (PET, SPECT), for photothermal therapy (PTT), and targeted radionuclide therapy of cancer.  In this entry, researchers synthetized a cancer-targeted multimodal probe (DOTA-NIR790 as shown in Figure 1) for cancer imaging and therapy by the mitochondrial potential difference between cancers and the surrounding normal tissues.

Early cancer detection represents the most promising way to reduce the growth of cancer [1]. Additionally, about 1000 million people worldwide suffer from cancer every year, with an increase number of people with cancer around the world, the development of drugs for cancer diagnosis and treatment is an important part of the biological medicine. The most common form of cancer is a solid tumor of the lung, breast, prostate, colon, and rectum. If the cancer can be diagnosed at an early stage, most cancer patients after surgery, radiotherapy, chemotherapy, or combination therapy can survival for a long time. The five-year survival rate of for early-stage cancer is up to 90%.
Therefore, accurate early detection makes it possible to perform all kinds of treatment prior to tumor progression. The cancer currently can be detected by many imaging modalities, including computed tomography (CT), single-photon emission computed tomography (SPECT), positron emission tomography (PET), ultrasonography, and magnetic resonance imaging (MRI) [2]. However, there are still many significant challenges in using molecular imaging for cancer detection, including that most of the specific receptors are not overexpressed in all types of cancer. Therefore, the development of a versatile molecular probe to detect the majority of cancer tissue has considerable benefits.
Near infrared fluorescent heptamethine cyanine dyes including indocyanine green (ICG), IR-783 and IR-780 iodide, has been shown to have abilities for noninvasive tumor imaging [3][4][5]. It was reported that cancer cells have higher mitochondrial membrane potential (ΔΨm) than normal cells [6] Because of mitochondrial membrane potential (ΔΨm) alteration in cancer cells, delocalized cationic compounds could accumulate in the hyperpolarized mitochondria as a tumor-targeting agent for imaging and therapy [7][8][9]. For example, rhodamine-123, Acridinium, and cyanine dyes have been used for in vitro and in vivo fluorescent imaging of the altered mitochondrial membrane potential in tumor cells, and as radiotracers for nuclear imaging of tumors [6][10][11][12]. In addition, several radiolabeled triphenylphosphonium (TPP) cations were used as radiotracers for nuclear tumor imaging [13][14].
For the treatment of primary or metastatic tumors, although surgical resection is the standard treatment, the tumors are not easy to remove by surgery in many situations. Therefore, imaging-guided cancer surgery will offer more effective and safe modalities of cancer therapy [15]. When the tumor in patients are really not suitable for surgery, tumor thermal ablation is another low-invasive treatment modality [16]. Photothermal therapy (PTT) destroys cancer cells by generating heat within a tumor by absorbing specific light sources [17][18]. The heptamethine cyanine dyes also exhibits unique optical properties due to its strong absorption at NIR wavelengths, which causes photothermal effects that can trigger thermal injury and cell death both in vitro and in vivo [6][7][8][9].
Indium-111 (111In, half-life = 2.83 days) only emits γ-ray (23, 171 and 245 keV), and is commonly used in nuclear imaging by radiolabeling targeted molecules [19]. In this study, Indium-111 was used as a diagnostic radionuclide to label with DOTA-NIR790 for nuclear imaging of cancers. Lutetium-177 (177Lu, half-life = 6.73 days) is an emerging, promising medium-energy beta-emitter (490 keV) with a low-abundance gamma emission (208 keV, 11% abundance) for biomedical use. This unique property makes 177Lu as a suitable radionuclide candidate for both therapeutic and diagnostic purposes.
In this study, researchers synthetized a cancer-targeted multimodal probe (DOTA-NIR790 as shown in Figure 1) for cancer imaging and therapy by the mitochondrial potential difference between cancers and the surrounding normal tissues. Compared with other reported cyanine-based theranostic probes, the DOTA-NIR790 has the additional chelated capabilities of radioisotope for nuclear imaging and targeted radionuclide therapy of cancers. DOTA-NIR790 is a single molecule with multi-functions for cyanine-based near-infrared fluorescence imaging and photothermal therapy of cancers, and for nuclear imaging and targeted radionuclide therapy of cancers after radioisotope-labeling. The heptamethine cyanine-based dye allowed the DOTA-NIR790 to have dual functions in cancer NIR imaging and photothermal therapy (PTT). The DOTA-NIR790 will be labeled with lutetium-177 to detect tumors by using SPECT imaging and kill cancer cells by its beta-emission. The 177Lu-DOTA-NIR790 enabled imaging by NIR fluorescence and by nuclear imaging (SPECT) to monitor in real-time the tumor accumulation, intra-tumoral distribution, and the situation of cancer therapy, and to guide the surgery or the photothermal therapy of the cancer. 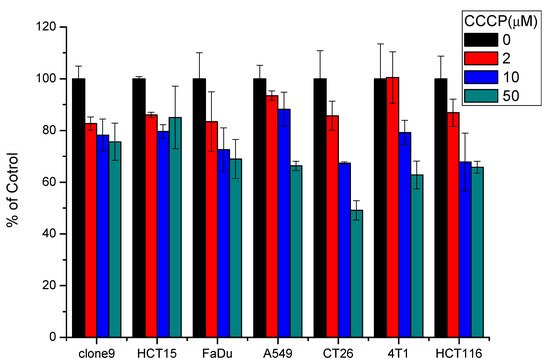 Figure 2. Representative uptake of 111In-DOTA-NIR790 in various cancer cells treated with 0, 2, 10, and 50 μM of carbonyl cyanine m-chlorophenylhydrazone (CCCP) (n = 3 per concentration of CCCP and cell).

This experiment was performed by single photon computed tomography (SPECT) and near infrared fluorescence imaging (NIRF). The biodistribution of multi-functional probes 111In-DOTA-NIR790 in mice bearing subcutaneous tumors was evaluated. First, 111In-DOTA-NIR790 (~37 MBq) were intravenously injected into mice with subcutaneous 4T1 breast tumor, and imaged on a SPECT/CT at 1, 4, 24, and 48 h, as shown in Figure 3a. Then, the mice were sacrificed and the organs were collected for quantitative analysis by gamma-counter, as shown in Figure 3b. According to the biodistribution, the 111In-DOTA-NIR790 has a much larger accumulation amount at the tumor site than the muscle tissue with the tumor/muscle ratio of 12.84 ± 0.65 at 48 h. It is mainly due to the fact that the hydrophilic 111In-DOTA-NIR790 can be cleared from normal tissues and organs more quickly, which can cause 111In-DOTA-NIR790 to have better tumor contrast and lower side effects in future applications of therapeutic isotopes. The NIRF imaging of mice bearing tumors was received at 1, 4, 24, and 48 h after intravenous injection of 111In-DOTA-NIR790 by the IVIS imaging system. The results are shown in Figure 3c. The mice were sacrificed and the organs were collected for the ex vivo NIRF imaging of organs and tumor and quantitative analysis of fluorescence intensity at 48 h after injection of 111In-DOTA-NIR790 as shown in Supplementary materials, Figure S3. 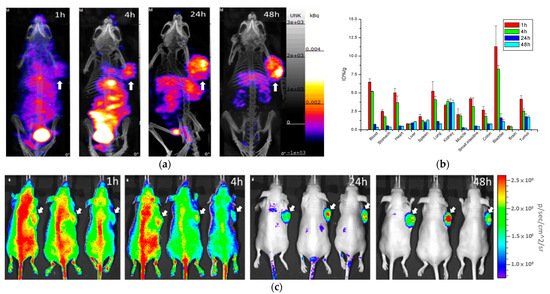 5. Biodistribution of 111In-DOTA-NIR790 in Mice with Brain Metastasis of Breast Cancer

111In-DOTA-NIR790 (about 37MBq of In-111) was intravenously injected into mice with brain metastasis of 4T1 breast cancer, and the NanoSPECT/CT imaging of the brain was performed at 48 h after administration as shown in Figure 4a. In addition, the IVIS imaging system was used for near-infrared fluorescence imaging of 111In-DOTA-NIR790 at 48 h after administration as shown in Figure 4b. After the mice were sacrificed, their brain tissues were extracted and quantitatively analyzed by gamma-counter at 24 and 48 h after injection, as shown in Figure 4c. The ex vivo NIRF images of brains with metastatic 4T1 breast cancer were shown in Figure 4d. According to these results, this probe can specifically bind to brain metastasis of 4T1 breast tumor, and similar results are obtained in SPECT and near-infrared light imaging. 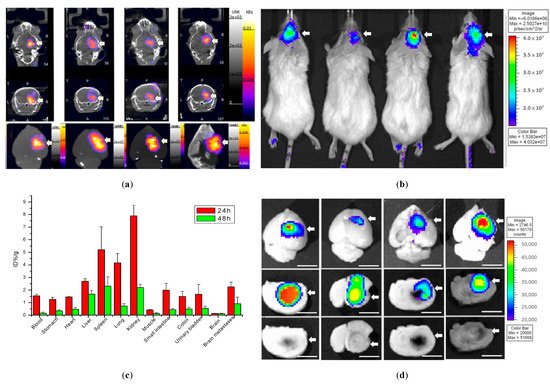 6. Biodistribution of 111In-DOTA-NIR790 in Mice with Subcutaneous Colon Cancer and Lung Cancer

To evaluate the effect of DOTA-NIR790 on photothermal therapy of cancer, the results were shown in Figure 7. After exposure to laser light at 808 nm (1.8 w/cm2), the tumor temperature during irradiation was measured by thermal camera. The infrared thermographic map showed that the tumor temperature was effectively increased to about 48.6 °C after 5 min of irradiation, when the mice treated with 15 mg/kg of DOTA-NIR790. 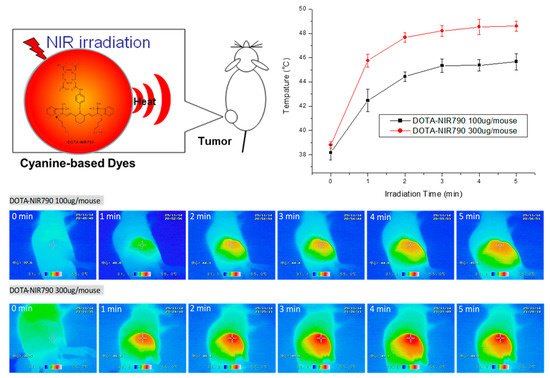 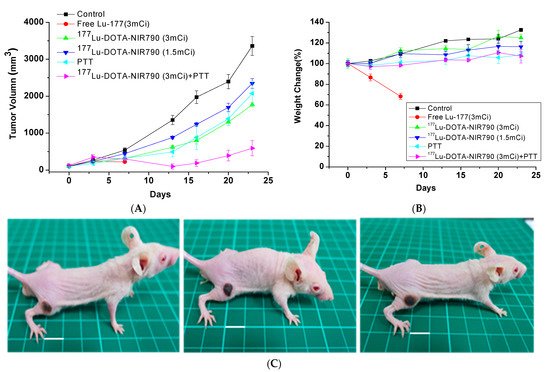