Submitted Successfully!
Thank you for your contribution! You can also upload a video entry related to this topic through the link below:
https://encyclopedia.pub/user/video_add?id=16451
Check Note
2000/2000
Infant and Young Child Formulae
Edit
Upload a video
This entry is adapted from 10.3390/nu13113942

When it comes to infant and young child feeding understanding the different types of formulae offered by the industry is key.

In the following entry we developed the definition, composition and characteristics of each type of formulae and their use in infant and child feeding.

For populations globally, the World Health Organization (WHO) recommends exclusive breastfeeding for about six months with continued breastfeeding along with balanced complementary feeding until at least two years of age, considering the benefits of breastfeeding on risk reduction for infection, physical, mental and social development [1]. For populations with a low burden of infectious disease such as infants in Europe, breastfeeding for at least the first 6 months of life and exclusive breastfeeding for 4-6 months has been recommended[2] . Infants that cannot receive sufficient amounts of human breast milk need safe infant formula of high quality as a breast milk substitute [3].
Formulae for infants are classified into regular formula for generally healthy infants, and formula for special medical purposes for the dietary management of disorders under medical supervision[4]. The regulatory standards of the Codex Alimentarius of the WHO and the Food and Agriculture Organization of the United Nations (FAO)[4] , the European Food Safety Authority (EFSA) and the European Commission [5][6] and the United States Food and Drug Administration (FDA) [7] are based on the general agreement that “Infant formula means a breast-milk substitute specially manufactured to satisfy, by itself, the nutritional requirements of infants during the first months of life up to the introduction of appropriate complementary feeding”[4].
Since infant formula differs from other foods in that it must satisfy all the nutritional needs of an individual from a single food product, while providing a very high nutrient supply per kg bodyweight during a particularly sensitive and vulnerable period of life, the regulatory standards for infant formulae set much stricter compositional, quality and safety standards than for any other food products [3].
There are also additional ingredients such as nucleotides, docosahexaenoic acid (DHA), arachidonic acid (ARA), oligosaccharides with presumed prebiotic functions, probiotics and complex fat components, which are added to some formulae because they are expected to provide potential benefits on visual and brain functions, the immune and bone system, intestinal microbiota, and other outcomes[8].

The global standards for infant formula composition were revised by the Codex Alimentarius in 2007[4] and were informed by recommendations of an international expert group invited by the European Society of Pediatric Gastroenterology, Hepatology and Nutrition (ESPGHAN), published in 2005, which are presented in Table 1.
Table 1. Recommendation on the composition of infant formulae by an international expert group coordinated by the ESPGHAN[9].
Infant formula is required to provide a protein content in the range of 1.8–3.0 g/100 kcal (7.3–12% of energy) if based on cows’ or goats’ milk protein [4],[6] or a higher protein content if based on soy protein isolate. A minimum content of indispensable amino acids is defined. While cows’ milk usually provides about 70–80% of casein and 20–30% whey proteins, modern formulae are enriched with whey proteins to improve the amino acid supply.
More than a decade ago, the early protein hypothesis was established suggesting that a high protein intake in excess of infant requirements can promote early weight gain (i.e., a rapid increase in infant weight), an increased later obesity risk, along with elevating insulinogenic amino acids, insulin release and insulin-like growth factor 1 (IGF-1) in infant blood and tissues[10]. This hypothesis has been confirmed with the results of the European CHOP (Childhood Obesity Project) randomized trial. Infants were randomized to feeding with a conventional formula with a high protein content, or an isoenergetic formula with a reduced protein content closer to human milk composition[11]. Infant feeding of the higher protein formula resulted in a significantly higher BMI (Body Mass Index) and body fat mass at the ages of 2 and 6 years, and a 2.6 fold higher obesity risk at age 6 years after adjusting for confounders, compared to infant feeding with the lower protein formula[11]. Accordingly, EFSA and the European Commission reduced the range of acceptable protein content in formula for infants, and also the new Codex Alimentarius draft standard for follow-on formula suggests a lower range of acceptable protein content.
Carbohydrates in infant formula usually are in the range of 9–14 g/100 kcal (36–56% of energy) [4],[6]. The preferred carbohydrate in infant formulae is lactose, the only digestible carbohydrate in human milk. Lactose has prebiotic effects and benefits for the gut microbiome, intestinal physiology and calcium absorption [12],[13].
The fat content and composition in human milk is very variable and is modified by the mother’s diet and other factors[14]. Formula fat composition is very different from human milk fat. Formula fat is usually based on a mix of vegetable oils such as canola, soy, sunflower, palm and coconut oils that are emulsified with soy lecithin. The addition of the long-chain polyunsaturated fatty acids docosahexaenoic acid (DHA) and arachidonic acid (ARA) to infant and follow-on formula is recommended[15]. Table 2 provides a summary of the macronutrient content of infant formulae in 100 mL of a standard dilution and per 100 kcal as stipulated by current regulatory standards.
Table 2. Compositional requirements for infant formula based on cows’ milk proteins.
For the Nutrition Group of the Latin American Society of Pediatric Gastroenterology, Hepatology and Nutrition (LASPGHAN), infant formulae are the only advisable BMS. Infant formula may be fed for the whole first year and beyond.

Even though infant formulae are suitable for the feeding for the duration of the first year of life and beyond, follow-on formulae have been offered since the 1970ies and are now widely used around the world to enable an adaptation of dietary intake to age related changes in needs[16]. According to the Codex Alimentarius, follow-up formula is: “a food intended for use as a liquid part of the weaning diet for the infant from the 6th month on and for young children”[17]. In the European food legislation, the compositional requirements for infant and follow-up formula are very similar. The major differences of follow-up formula composition, as compared to infant formula, are an increased iron content (0.5–2.0 vs. 0.3–1.3 mg/100 kcal) and a lower minimum protein content (1.6 vs. 1.8 g/100 kcal), matching the changing requirements over time [6],[18]. High iron stores at birth suffice to cover the iron needs for growth during the first postnatal month, compensating for the low iron content of human milk, and they lead to a low postnatal iron absorption. Therefore, a high iron supply with formula in the first 6 months remains mostly unabsorbed and the non-absorbed iron can induce adverse effects on gut microbiota, infection and inflammation, and length growth. Therefore, a low iron supply with formula fed from birth, similar to the low iron supply with breastfeeding, is desirable. However, towards the end of the first year endogenous iron stores become depleted, and an increased dietary iron supply from complementary feed and higher contents in follow-up formula is useful.
Infant protein requirements are related to weight gain velocity which rapidly declines during the first months of life. Accordingly, protein requirements per kg bodyweight at 6 months of age are only 2/3 of those after birth, and protein supply per kg bodyweight in an exclusively breastfed infant at 6 months is only 55% of that after birth[19]. The use of adequately composed follow-up formula can help to better match dietary intake to changing needs with age. LASPGHAN suggests that they can be used for infants older than 6 months without age limit. Lactose should continue to be the main carbohydrate, whereas they should be sucrose free.
Global standards for the follow-up formulae composition were updated by the Codex Alimentarius in 2013 and are currently under review[17]. They were informed by recommendations of international experts coordinated by the Early Nutrition Academy (ENA)[20] (Table 3 provides a summary of the micronutrient content of infant formulae in 100 mL of a standard dilution and per 100 kcal as stipulated by current regulatory standards.
Table 3. Recommended composition of follow-up formula for older infants by an international expert group coordinated by the Early Nutrition Academy[20].

While infant and follow-up formulae serve as a substitute for breast milk, young child formulae used from the age of one year onwards are meant to serve as an alternative to cows’ milk with an improved nutrient composition. Manufacturers have often called such products “growing up milks”, a term that is not supported by the pediatric community because it implies that such products would have a functional impact on growth for which there is no evidence whatsoever, therefore the term “growing up milks” is considered an unfounded and misleading health claim. The protein content of young child formula is usually lower than that of cows’ milk (CM). Fats are mostly a blend of vegetable oils similar to other regular formulae, and hence they contain more polyunsaturated and less saturated fats than cows’ milk. Many products contain not only lactose but are also sweetened with saccharose (sucrose), which is undesirable. Moreover, the frequent addition of strong flavors and aromas is not supported because it may interfere with the desirable imprinting of taste preferences for normal healthy foods. Given that young children around the world[21] as well as in Europe[22] often have insufficient intakes of critical nutrients such as iodine, iron, vitamin D, alpha-linolenic acid and DHA and too high intakes of animal protein, adequately composed young child formula are one of several options that can contribute to improve dietary quality[21],[23]. Recommendations for the composition of young child formula have been published (Table 4).
Table 4. Compositional requirements of young child formula for young children aged 12–36 months proposed by an International Expert Group co-ordinated by the Nutrition Association of Thailand and the Early Nutrition Academy. Modified from[21].
NS, Not specified; DHA, Docosahexaenoic acid. 1 The addition of DHA is optional. 2 1 mcg RE (retinol equivalent) = 1 mcg all-trans retinol = 3.33 IU vitamin A. Retinol contents shall be provided by preformed retinol, while any contents of carotenoids should not be included in the calculation and declaration of vitamin A activity. 3 The bioavailability is approximately 10%.
Across Latin American countries nutritional deficiencies of iron, zinc, vitamin A, vitamin D and other nutrients have been reported with a high prevalence in different Nutrition Surveys of most of the countries in the region. In 2016, UNICEF reported that only 16% of children between 6 and 23 months of age in the world complied with the minimum acceptable diet, defined as those who reach the minimum number of meals plus a minimum number of foods on the previous day[24]. LASPGHAN considers that in the case of Latin America, adequately composed young child formulae replacing part of the dietary CM may have additional benefits for children who have a poor diet[22].
Figure 1 summarizes the average energy content of the regular formulae marketed for different age groups, the minimum protein content for infant formulae, follow-up formulae and young child formulae, based on the different requirements available for their composition [4],[17],[24]. 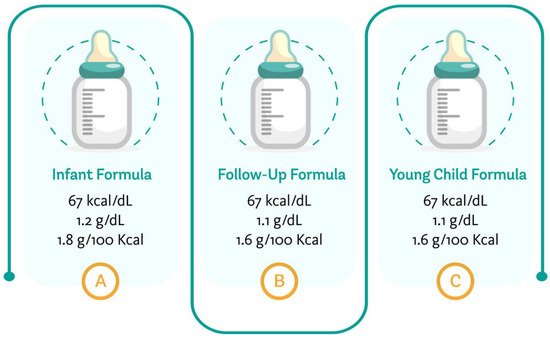