Submitted Successfully!
Thank you for your contribution! You can also upload a video entry related to this topic through the link below:
https://encyclopedia.pub/user/video_add?id=1639
Check Note
2000/2000
Milk Thistle Seed and Hempseed
Edit
Upload a video
This entry is adapted from 10.3390/ani10081384

In accordance with Commission Regulation (EC) No 726/2004, the use of antibiotics as stimulators of animal growth and performance has been banned in all European Union countries since 2006 (due to the elimination of antibiotic residues from the human food chain). Due to this ban, many scientists are studying alternative approaches to the use of various biologically active substances with a growth-promoting e ect. A promising direction is the use of alternative feeds containing bioactive compounds or mixtures of natural origin, or the use of phytoadditives or plant extracts, probiotics, prebiotics, symbiotics or oilseed by-products, such as hempseed cakes and milk thistle seed cakes in animal nutrition.

Milk thistle (Silybum marianum L.) is an annual or biennial herb naturally occurring in the regions of the Mediterranean and North Africa [1]. The active substances contained in the purple variety of milk thistle, known as the silymarin complex, have hepatoprotective, detoxifying and antioxidant effects, thanks to which parts of this plant are used for the treatment and prevention of liver and bile diseases (hepatitis, cirrhosis) and hence the protection from toxins and various chemicals substances [2].

In addition to these essential nutrients, cannabis contains compounds such as plant sterols and phytocannabinoids, including the most abundant delta-9-tetrahydrocannabinol (THC), which is a strong fat-soluble antioxidant, stimulating appetite [12][13][14]. Cannabinoids are substances found only in cannabis. Cannabis contains more than 60 (phyto) cannabinoids that have anti-inflammatory, analgesic effects [15][16][17] , anti-ischemic [18], antipsychotic, anxiolytic (against anxiety) [19] and effects against epilepsy [20]. Antimicrobial, immunomodulatory, antioxidant and antihypertensive effects are also described [14]. 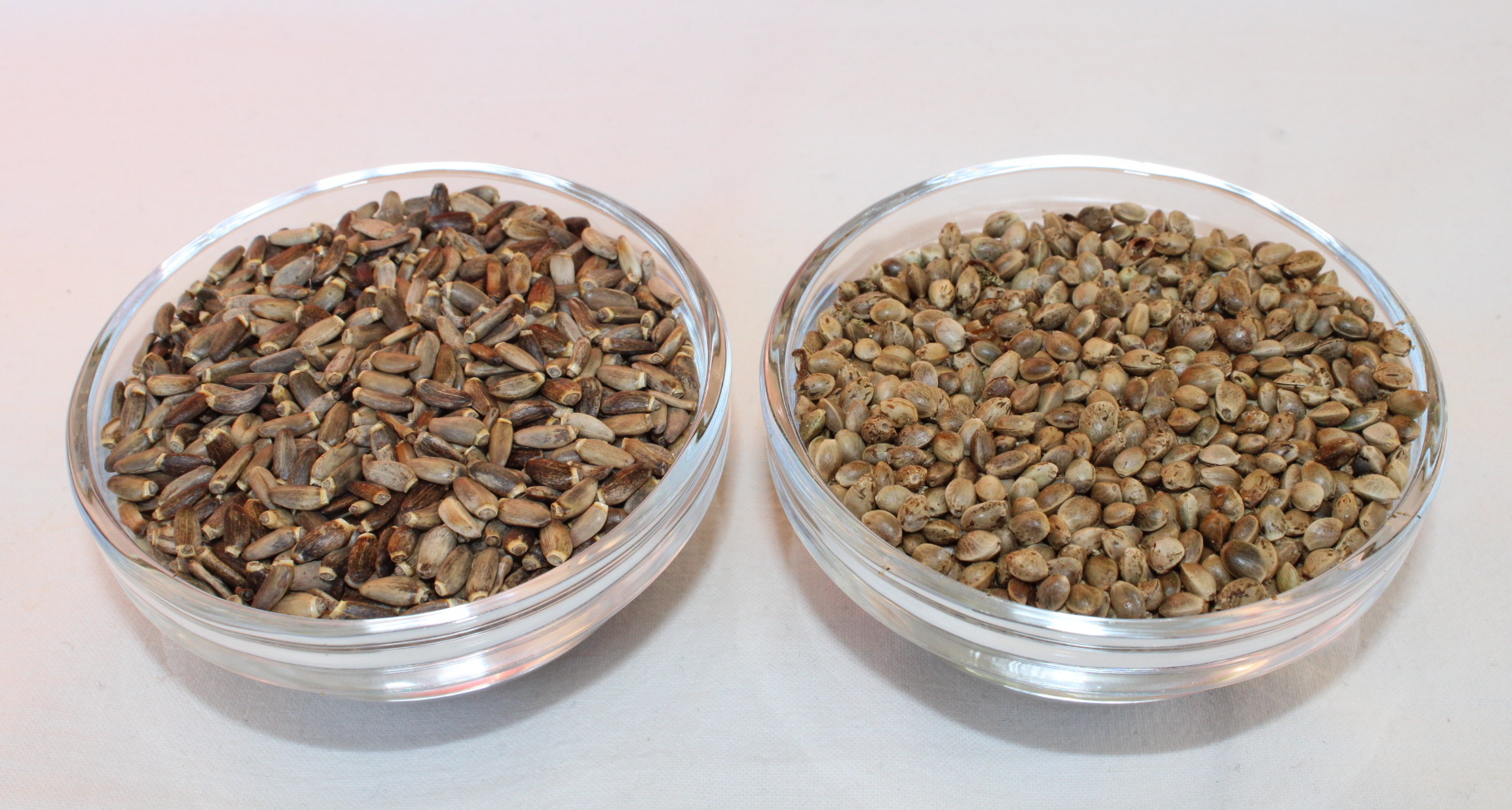 Many authors have tried to make milk thistle substances available to poultry without the need to feed expellers or other forms of plant by-products [22][23][24]. For example, Gawel et al. [24] fed chickens and turkeys with a commercial preparation containing 80% of silymarin at doses of 0.5 kg and 1 kg per ton of feed mixture. These authors found that the final live weight of the Cobb 500 chickens in the experimental groups was 4.8–6.6% higher than in the control group. Feed conversion ratio was balanced in all groups. The authors recorded the highest percentage of mortality (4.1%) in the chickens of the control group. Similarly, these authors Gawel et al. [24] found 1.9–3.8% higher live weight in BUT 9 hybrid turkeys fed mixtures containing the addition of silymarin compared to the control group. The turkeys were similarly affected, with a higher live weight of 2.5–3.0%. Schiavone et al. [22] found no differences in the live weight of chickens at the end of the experiment, but also in feed consumption and feed conversion when feeding a commercial milk thistle seed extract containing 40 and 80 ppm of silymarin. Another study by Zarei et al. [23] applied 1 mL of milk thistle extract in ovo in two dilutions (100 and 200 mg/L) and then also added it to the feed mixture at a dose of 100 mg/kg. They found that the level of 100 mg/L in ovo caused a significantly lower (p < 0.05) chicken’s final live weight (2125 g) at 42 days of age compared to the control group (2179 g). The feed mixture containing 100 mg/kg of extract caused significantly higher final live weight (2218 g) of chickens compared to the control group (2079 g). Silymarin also has a positive effect on feed intake, weight gain [25][26][27][28][29] and liver tissue morphology of chickens [27]. In addition, silymarin supplementation has a significant effect on meat quality and shelf life by increasing post-mortem oxidative stability [22].

The enzymes GGT and AST are considered physiological indicators of liver health. High gamma-glutamyl transferase enzyme activity in avian blood plasma is associated with hyperplasia and bile duct tumors [30]. It was claimed by Tedesco et al. [25] that silymarin content of 600 mg/kg in the diet can reduce the plasma GGT and AST activity in broiler chickens’ blood affected by aflatoxicosis. In addition, silymarin has been shown to reduce the activity of these enzymes in people with liver diseases [31] as well. In [32], significantly lowered activity of ALT and AST enzymes in the blood plasma of the experimental groups (0.2% and 1% of milk thistle seed cakes in the diets) was found, compared to the control group, on day 22 of the chicken fattening period. At day 43 of fattening, the lower activity of these enzymes in the experimental groups was not conclusive, but lower GGT enzyme activity and lower cholesterol levels were demonstrated in the group containing 1% seed cakes in the diet compared to the control group [32]. Similar results were achieved by Alassi and Allaw [33] with the addition 1 g/kg milk thistle seed powder in quail diet. A significantly lower level of cholesterol, glutathione (GSH), malondialdehyde (MDA), ALT and AST and a higher level glucose, total protein and globulin was found in the experimental group compared to the control group. Moreover, after the addition of 150 g/day of milk thistle seed cakes to dairy cattle [34], a higher AST enzyme activity was found, with other measured parameters GGT, LD, total protein, albumin, glucose, unesterified fatty acids, β-hydroxybutyrate, urea and bilirubin unchanged. In contrast to the above authors, our results in the inclusion of milk thistle seed cakes in the poultry diet did not affect the activity of liver-specific enzymes such as AST and GGT [35].

More
© Text is available under the terms and conditions of the Creative Commons Attribution (CC BY) license; additional terms may apply. By using this site, you agree to the Terms and Conditions and Privacy Policy.
Upload a video for this entry
Information
Subjects: Plant Sciences ; Zoology ; Agriculture, Dairy & Animal Science
Contributor MDPI registered users' name will be linked to their SciProfiles pages. To register with us, please refer to https://encyclopedia.pub/register :
Ondřej Šťastník
View Times: 397
Revisions: 5 times (View History)
Update Time: 29 Oct 2020
Table of Contents
1000/1000
Hot Most Recent