Submitted Successfully!
Thank you for your contribution! You can also upload a video entry related to this topic through the link below:
https://encyclopedia.pub/user/video_add?id=16309
Check Note
2000/2000
CNPase
Edit
Upload a video
This entry is adapted from 10.3390/ijms221910806

Heart failure is the end-stage of cardiovascular disease and represents the top threat to public health worldwide. Despite accomplishments in therapeutics for heart failure, with a 5-year mortality rate of 75%, the prognostic results are far from satisfactory [1]. Cardiac pathological hypertrophy usually precedes the onset of heart failure and is characterized by enlarged cardiomyocytes, thickening, and stiff ventricular walls due to pressure overload, mutations of sarcomeric proteins, or infarction-induced cardiomyocyte loss [2]. The deficiency of ATP production plays a central role in the pathogenesis and progression of heart failure phenotypes [3]. At present, improving myocardial energy homeostasis with neuroendocrine systems and heart rate management has emerged as a core strategy for treating heart failure [4].
Genetic modification, pharmacological and surgical methods have been used in small animals to decipher the pathogenesis of heart failure and develop new therapies. Zebrafish are well characterized and widely used cardiovascular disease models based on genotypic and genotyping similarities. They are suitable for high-throughput chemical screening and gene manipulation due to their tiny size, relatively low maintenance cost, rapid development, accessibility for in vivo imaging, and the optical clarity of embryos [5]. Additionally, zebrafish embryos can survive without blood flow by oxygen diffusion, which makes them excellent models of heart failure [6]. Approximately 25% of mouse genes are embryonically lethal when knocked out [7], making it difficult to produce viable murine models for the study of heart failure.
Recently, the roles of 2′,3′-cyclic nucleotide-3′-phosphodiesterase (CNPase) in the pathophysiological processes of heart diseases have emerged, as indicated by researchers targeting CNPase enzymatic activity, which might represent a novel therapeutic strategy for heart failure [8]. As an unconventional PDE, CNPase catalyzes 2′,3′-cyclic nucleotides as substrates [9], which are reported to impair mitochondrial integrity and accelerate the opening of the mitochondrial permeability transition pore (mPTP) [10]. As a mitochondrial protein, protein–protein interactions between the functional complexes I–V of the mitochondrial inner membrane and CNPase, leads to the assumption that CNPase might be involved in mitochondrial respiration and energy production [11]. Increasing shreds of evidence suggest that CNPase plays a role during ageing through substrate hydrolysis activity and protein–protein interactions to protect mitochondria from mPTP, and the antiaging activity of CNPase in heart failure and brain cognition was suggested by two reports [12][13]. However, CNPase deficiency is potentially embryo lethal, and premature deaths are quite common among CNPase −/− litters [14]. Thus, suitable genetically modified animal models, which could be developed as powerful tools to provide direct evidence of CNPase function in heart failure, are lacking for studying CNPase in cardiovascular diseases.

To explore the role of CNPase in cardiomyopathy development, a translation-blocking cnpase morpholino (MO) was designed (Figure 1A) and injected onto one-cell stage embryos. Kaplan–Meier analysis of the survival rate showed that roughly >85% of the cnpase-blocked larvae were deceased within three days post-fertilization, suggesting that the cnpase loss-of-function might lead to embryonic or neonatal death (Figure 1B). Notably, the cnpase-blocked larval zebrafish developed pericardial edema, atrium and ventricle hypertrophy, bradycardia with a reduced ejection fraction, fractional shortening, and cardiac output, which was highly similar to the pathophysiological state of human heart failure (Figure 1C–H). 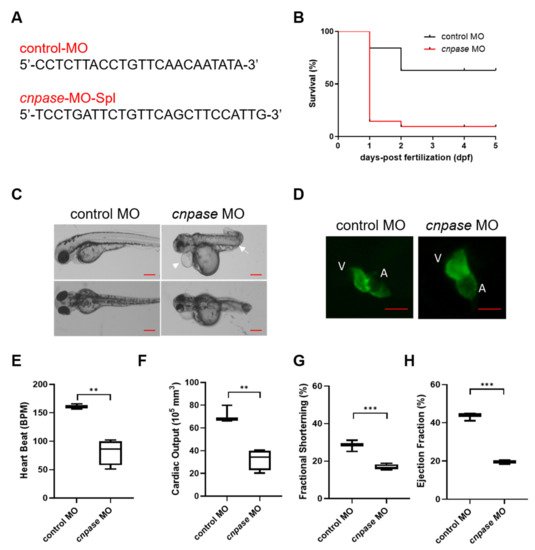 3. The Generation of a Zebrafish Cardiomyopathy Model by CRISPR-Cas9-Mediated CNPase Knockout

To establish a stable cardiomyopathy animal model, researchers herein generated a cnpase knockout zebrafish strain on a pure AB Tg(flk: egfp) background using the CRISPR-Cas9 gene-editing system. CRISPR-Cas9 founders (F0) were generated in which the first exon of the zebrafish CNPase ortholog was targeted simultaneously by a pair of sgRNAs (Figure 2A). Adult founders were inbred to give birth to the offspring, in which indels were detected in the PCR amplicons of the region around the target site (Figure 2B,C). Researchers found that frame-shift indels in the cnpase coding region could create mutant alleles in zebrafish in which it recapitulates MO phenotypes, excluding the possibility of MO-induced toxic and off-target effects (Figure 2C,D). Considering that homozygous mutations of CNPase cause embryo or neonatal lethality, the heterozygous cnpase+/− zebrafish strain was maintained for future study. 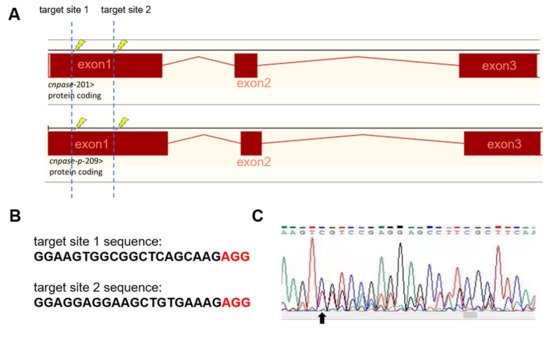 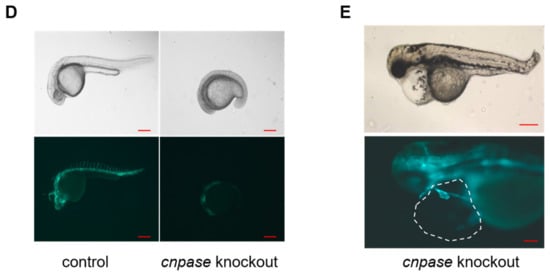 Researchers reported that targeting CNPase enzymatic activity might give rise to novel therapies for heart failure [8]. Thus, the therapeutic potential of CNPase as a new target in a translational cardiac hypertrophy animal model was explored. Heart hypertrophy was surgically induced by abdominal aorta constriction in Sprague-Dawley rats. Two weeks later, CNPase was introduced into the left ventricular myocardium through ultrasound-guided AAV9 delivery. Four weeks after the AAV9 delivery, the echocardiographic analysis revealed that the hypertrophic response was less pronounced in the AAV9-CNPase delivered group, supported by the decrease of left ventricular internal diameter in the vesicle-delivered group (Figure 3A). Further, the heart dysfunction had recovered upon the AAV9-mediated gene therapy, wherein the cardiac output (CO), left ventricular ejection fraction (EF), as well as fraction shortening (FS) were enhanced (Figure 3C–E). No effects of CNPase expression on heart rate were observed (Figure 3B). 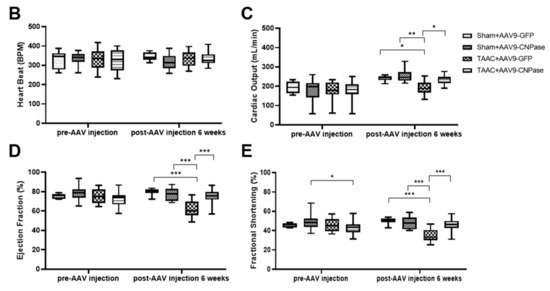 As the most energy-demanding organ, the heart relies on mitochondria as the powerhouse to produce ATP. The mitochondrial bioenergetics were profiled by the mitoStress assay using a Seahorse XFe96 cellular energy analyzer (Figure 4A). Current data demonstrated that the respiratory capacity was decreased upon AngII-induced hypertrophic stress. In contrast, the mitochondrial bioenergetics were well preserved in CNPase-overexpressed cells, as suggested by the basal, maximal, and reserved mitochondrial oxygen consumption rate (OCR) (Figure 4B–E). Notably, there was an increase of ATP-linked OCR in CNPase-overexpressed cells compared to the empty vector-transfected cells (Figure 4D).