Submitted Successfully!
Thank you for your contribution! You can also upload a video entry related to this topic through the link below:
https://encyclopedia.pub/user/video_add?id=16266
Check Note
2000/2000
Breast Cancer Management and Extracellular Vesicle Research
Edit
This entry is adapted from 10.3390/curroncol28060382

Our team has conducted a investigation about the publications involving breast cancer and extracellular vesicles. The search resulted in 1151 documents, in which the first article involving exosomes and breast cancer was published in 1998; however, the first use of the term “exosomes” was in 1970[1]. These documents accounted for 785 experimental and clinical articles and 295 reviews; the other 71 included different document types, such as entire books or individual chapters, conference papers, and editorial notes. The documents were published in 451 different sources, cited 41,363 times in total, and written by 5599 authors from 57 countries.
An increasing number of publications can be observed (Figure 1), wherein one article was published in 1998—the first one—and the curve reached its peak of 318 articles in 2020, with 276 more published articles until the moment of the data update (October 2021). The mean of the total citations per year normalized by the citable years is shown in. It evidences some of the peaks of the citations that are correlated with the important articles published on the theme, which had a great impact and directed the research in the field, also making it possible to create a historiographic map to retrieve these impactful articles (Figure 2). 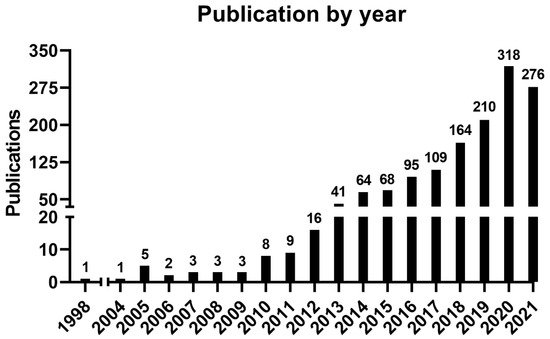 Figure 1. Number of publications by year. 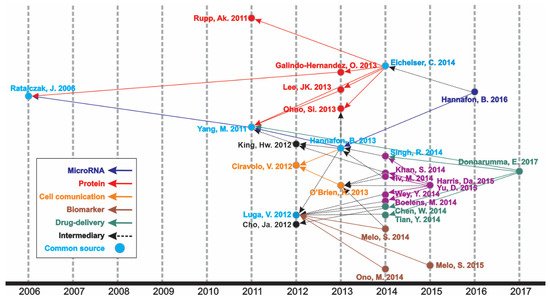 Figure 2. Historical direct citation network.
In the historiographic map, different groups of articles are observed indicating a scientific path throughout the years of publications on the theme, as indicated in Figure 2. Thus, the major path, meaning from the last impactful publication on the theme (in 2017) until the first one (in 2006), is constituted by five minor paths (MicroRNA, Protein, Cell communication, Biomarker, and Drug delivery), with some articles contributing to more than one minor path or presenting content of transition, respectively nominated as “Common source” and “Intermediary” paths.
The most relevant source regarding the number of articles published was the International Journal of Molecular Sciences (38 documents, IF: 4.556), followed by Oncotarget (37 documents, IF: 5.168 in 2016) and Scientific Reports (32 documents, IF: 3.998). Taken together, these three journals represented 9.2% of all the publications on the theme.
However, the number of publications was not correlated with the citation number. Thus, four journals (Oncotarget, Plos One, Scientific Reports, and Cancer Research) can be found in different positions in both tables, indicating that a higher citation number is not correlated with the higher impact of publications and citations of a journal. The top three most cited sources were “Cancer Research” (2116 citations, IF: 9.727), “Nature” (1491 citations, IF: 42.779), and “Oncotarget” (1447 citations, IF: 5.168 *). Coincidently, 8 out of 10 journals listed were also among the 50 journals that contributed the most, accounting for the top 100 most cited articles in extracellular vesicles and cancer[2]. “Cancer Research”, “Plos One”, “Nature”, and “Cell and Nature Biology” were the top 10 in both ranks. The top 10 journals comprise 27.5% of all citations.
The most cited article was “Glypican-1 identifies cancer exosomes and detects early pancreatic cancer”, written by Sonia A. Melo [3], published in “Nature”, and cited 1561 times. In this paper, a cell surface proteoglycan (glypican-1) was identified as being specifically enriched on cancer cell-derived exosomes, serving as a potential non-invasive diagnostic and screening tool to detect the early stages of pancreatic cancer. Moreover, it is directly involved in the historical direct citation network (Figure 2), contributing to guiding other studies throughout the research on this theme.
The institution presenting the highest production regarding the number of publications was “Cornell University”, USA, accounting for 36 publications, followed by “The University of California”, USA, with 35 publications and “Shahid Beheshti University of Medical Sciences”, Iran, with 33 publications. The top 10 most productive institutions are from the USA, Iran, and China, representing a closely distributed production. Concerning the most productive country, the USA ranked as the first, in which all its institutions published 355 articles, followed by China, which published 311 articles, and Italy, which published 83 articles (Figure 3). 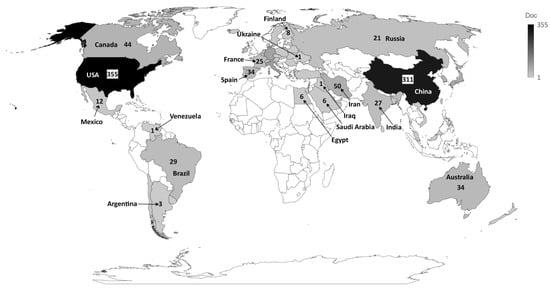 Figure 3. Countries that published most on the theme.
A total of 2146 author keywords were retrieved, and 45 met the threshold of a minimum number of occurrences at 10 times cited. These keywords were grouped into six clusters (Figure 4), presenting a different average of citation (Figure 5) and different years of appearance in the articles on the theme (Figure 6). The keywords with at least 10 occurrences, in the top 100 most cited articles in cancer and extracellular vesicles[2], roughly coincided with those we found. For instance, “microRNA”, “diagnostic biomarker”/“diagnosis” and “biomarker”, “proteomic analysis”/“proteomics”, “angiogenesis”, and “metastasis”. Interestingly, “chemotherapy” and “drug delivery”, included in our keyword network with approximately 40 citations, were not found in the mentioned previous study. This suggests that the research in breast cancer and extracellular vesicles may have been following an additional path for the last 4 years. 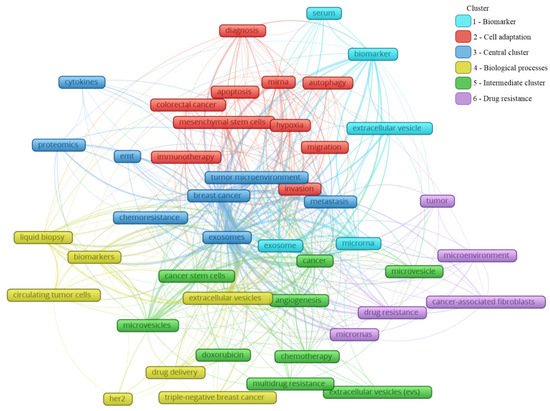 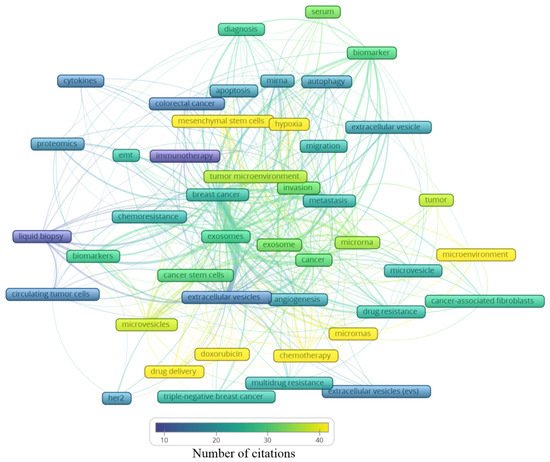 Figure 5. Average number of citations of the main keywords related to extracellular vesicles and breast cancer. 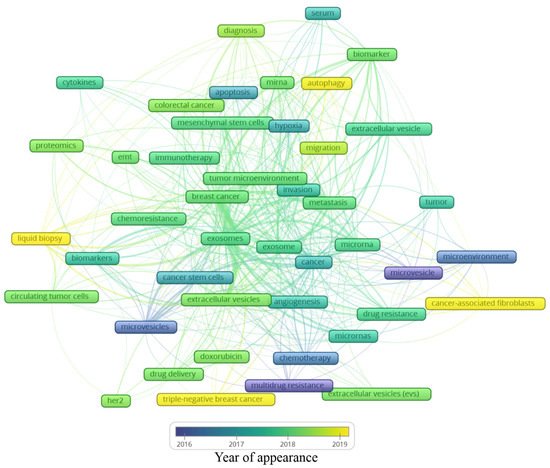 Figure 6. Average year of appearance of the main keywords related to extracellular vesicles and breast cancer.
In Figure 4, the clusters are grouped by colors. From the cluster “1—Biomarker”, the keywords point to the microRNA of extracellular vesicles being used as biomarkers, mainly from the serum. The cluster “2—Cell adaptation” presents the process of autophagy and cell migration as being associated with a hypoxic microenvironment, probably having an influence on mesenchymal stem cells in colorectal cancer progression, and that could be treated with immunotherapy; additionally, miRNA is pointed as a strategy to be used in the diagnosis of colorectal cancer, as well as breast cancer. In cluster “6—Drug resistance”, an association between cancer-associated fibroblasts (CAFs) and microRNAs in the drug resistance process of the tumor microenvironment can be observed. The cluster “4—Biological processes” shows that drug delivery can be a strategy in the treatment of HER-2 and triple-negative breast cancer, and to improve the diagnosis accuracy, a liquid biopsy analyzing circulating tumor cells or using extracellular vesicles as biomarkers can constitute the next scientific direction on the theme. The cluster “5—Intermediate cluster” is an intermediate between the “6—Drug resistance” and the “4—Biological processes” clusters, in which the association between the tumor microenvironment and biological processes, such as angiogenesis, being mediated by microvesicles and not exclusively by exosomes, is displayed. Moreover, microvesicles and exosomes seem to influence other scenarios in cancer treatment, for example, the multidrug resistance to chemotherapeutics classically used in breast cancer, such as doxorubicin. In the final cluster, “3—Central cluster”, the main keywords are grouped, which are linked with all the clusters.