Submitted Successfully!
Thank you for your contribution! You can also upload a video entry related to this topic through the link below:
https://encyclopedia.pub/user/video_add?id=16242
Check Note
2000/2000
Balancing Photosynthesis through Cyclic Electron Flow
Edit
This entry is adapted from 10.3390/antiox10111789

Cyclic Electron Flow （CEF）has evolved to divert electrons back to PETC to enhance H+ pumping to boost the proton motive force (PMF) across the thylakoid membranes to balance photosynthesis and, consequently, NADPH/ATP ratio.

CEF has evolved to divert electrons back to PETC to enhance H+ pumping to boost the proton motive force (PMF) across the thylakoid membranes [1]. PMF has two components, the proton gradient (∆pH) and the membrane potential (∆Ψ), and is responsible for the ATP synthesis by the ATP synthase of the thylakoid membrane, a process that is subjected to redox regulation [2][3][4]. Other thylakoid-localised transport processes, such as the K+ exchange antiporter 3 (KEA3), operate to harmonise PMF with metabolic requirements. KEA3 acts modulating ATP synthesis hence relaxing ∆pH by proton export from the thylakoid lumen [5]. KEA3 activity might be controlled via the stroma-located C-terminal domain, possibly by monitoring the NADPH/NADP+ ratio [6]. Wang and co-workers have also proposed a second type of redox regulation involving an N-terminal Cys residue facing the lumen side [6].
The question arising is why plants have two CEF systems, NDH and PGR5/PGRL1 complexes, both of them having a role in protection against light stress. In chloroplasts, multiple interconnected biosynthetic pathways are operating at the same time. In general, these processes are NADPH and ATP consuming, but the NADPH/ATP ratio to support each metabolic pathway is diverse and this ratio must be adapted to specific needs (i.e., Calvin–Benson cycle, nitrogen and sulphur assimilation, lipid biosynthesis, isoprenoid precursor biosynthesis, etc.). Reaching a proper balance between NADPH and ATP, integrating light (energy input), plant development and cell catabolism might involve dynamic processes acting at the photosynthesis level (Figure 1). According to this reasoning, it would be interesting to investigate and shed more light on the role of CEF in plant physiology/metabolism under non-stress conditions. 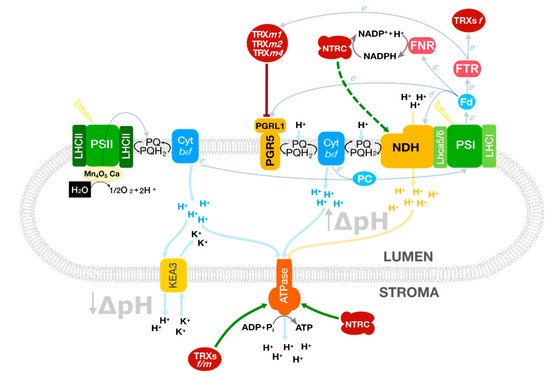 The Arabidopsis NDH complex is composed of 29 subunits (11 of which are plastid-encoded) grouped in five subcomplexes [7]. The chloroplast NDH complex, which has a molecular mass of approximately 700 kDa, shows homology with the respiratory complex I of bacteria and mitochondria. This complex is present as a monomeric complex associated with PSI [8]. Some authors have recently determined that in A. thaliana plants grown under non-stressing conditions the PSI:NDH ratio is about 45.4 [9]. Concerning redox regulation of NDH activity, it was proposed that NTRC exerts an activating effect, [10] whereas TRX m4 was suggested to be a negative regulator [11] (Figure 1). Whereas several NDH subunits were identified in a co-immunoprecipitation assay using anti-NTRC antibodies, supporting their redox regulation [10], the mechanism of TRX m4-dependent NDH regulation remains to be determined [11]. Since, as far as we know, no thiol/disulphide mechanisms were proposed to directly regulate NDH activity, the post-translational redox regulation of NDH remains elusive. Nevertheless, though indirectly, redox signalling affects NDH regulatory proteins acting at transcriptional or translational levels. For instance, it is known that hydrogen peroxide can trigger the activity of the NDH complex in barley [12] and that low levels of ascorbic acid or reduced glutathione downregulate genes coding for NDH subunits [13]. Paradoxically, though many years ago phosphorylation was described to activate the NDH complex [14], no direct redox regulation has been proved so far for this photosynthetic complex. The question is whether NDH- and PGR5/PGRL1-dependent CEF integrate different types of chloroplast cues to balance the NADPH/ATP ratio under a broad range of environmental and developmental situations. Interestingly, several orchid species, plants that have a heterotrophic phase in their life cycle, have lost the NDH complex, which led to propose that the loss of NDH complex might be necessary for these plants [15]. The question is whether this apparently TRX-independent process is related to the role of NDH in non-photosynthetic organs as fruits [16].

The PGR5/PGRL1 complex is formed by two subunits and exerts a photo-protective role against high-light mediated stress (Figure 1) [17][18]. Unlike NDH, there are solid experimental data showing the redox-regulation of PGR5 [11][19][20]. In line with this notion, it was reported that TRXs m collectively down-regulate the PGR5/PGRL1 complex [19]. In planta, TRX m4 downregulates PGR5 activity by reducing PGRL1 (Figure 1) [11]. In addition, the relevance of the regulation of PGR5/PGRL1 on the chloroplast redox state was evidenced by the recovery of enzyme reduction in the ntrc pgr5 Arabidopsis double mutant [21].
The cyanobacteria Synechocystis sp. contains PGR5 but not PGRL1 [22]. Nevertheless, in spite of the low similarity between the cyanobacterial protein SII1217 and PGRL1, both proteins might be functionally related, suggesting a putative prokaryotic origin of PGRL1. Interestingly, Arabidopsis PGRL1 has six cysteine residues whereas cyanobacterial SII1217, which has not been shown to be redox-regulated, has only three [19][20]. Anyway, Synechocystis mediates the non-photochemical reduction of PQ possibly via CEF through the NDH-1 complex [23][24]. Another aquatic organism, the marine angiosperm Zostera marina, conserves the two CEF systems and shares with land plants a similar response to respond to excess radiation [25].

Chloroplast Fds are small proteins containing a [2Fe:2S] cluster with low redox potentials. These proteins regulate electron partitioning in plant chloroplasts by transferring electrons from photo-reduced PSI to different stromal proteins such as Fd NADP+ reductase (FNR) or FTR, as well as to the thylakoid-located CEF systems NDH and PGR5/PGRL1 [26]. Arabidopsis harbours four chloroplastic Fd isoforms, namely FD1 (AT1G10960), FD2 (AT1G60950), FDC1 (AT4G14890) and FDC2 (AT1G32550) [27][28]. FD1 and FD2 account for 7% and 90% of the total leaf Fd, respectively [29]. The presence of several Fd isoforms in plants suggests the existence of specific targets for these enzymes. In this regard, it was hypothesised that FD1 would contribute to CEF and FD2 to LEF [30][31][32][33]. FDC1 and FDC2 have an additional extension at the C-terminus, near their active sites, as well as higher redox potentials than FD2, hence FDC1 and FDC2 can be considered atypical Fds [27][28]. Unlike FD1 and FD2, FDC1 is not able to interact with FNR; nevertheless, it can interact with the CEF complexes NDH and PGR5/PGRL1 or with FTR [28]. These results suggest a role of FDC1 in partitioning providing electrons to specific chloroplast processes. Although there is no experimental evidence so far, the possibility cannot be discarded that FDC2 might have a similar function to FDC1. Its functional significance in plants was proven in rice, where a mutation in the FDC2 ortholog HDY1 provokes leaf yellowing and a delay in flowering time [34].
In photosynthetic organisms, the docking site at PSI, formed by the subunits PsaD and PsaE, allows the electronic transfer between Fds and PsaC [35]. Remarkably, Arabidopsis has two isoforms of PsaD and PsaE [28], thus, it is tempting to speculate that the combination of these isoforms might constitute auxiliary docking sites for chloroplast Fds. If this were the case, the donor site of PSI would also play an active role in photosynthesis electron partitioning and redox regulation.

More
© Text is available under the terms and conditions of the Creative Commons Attribution (CC BY) license (http://creativecommons.org/licenses/by/4.0/)
Upload a video for this entry
Information
Subjects: Plant Sciences
Contributor MDPI registered users' name will be linked to their SciProfiles pages. To register with us, please refer to https://encyclopedia.pub/register :
María Cruz González
View Times: 42
Revisions: 2 times (View History)
Update Time: 22 Nov 2021
Table of Contents
1000/1000
Hot Most Recent