Submitted Successfully!
Thank you for your contribution! You can also upload a video entry related to this topic through the link below:
https://encyclopedia.pub/user/video_add?id=16218
Check Note
2000/2000
Natural Products from Actinomycetes of Marine Organisms
Edit
This entry is adapted from 10.3390/md19110629

The actinomycetes have proven to be a rich source of bioactive secondary metabolites and play a critical role in the development of pharmaceutical researches. With interactions of host organisms and having special ecological status, the actinomycetes associated with marine animals, marine plants, macroalgae, cyanobacteria, and lichens have more potential to produce active metabolites acting as chemical defenses to protect the host from predators as well as microbial infection. This entry focuses on 536 secondary metabolites (SMs) from actinomycetes associated with these marine organisms covering the literature to mid-2021, which will highlight the taxonomic diversity of actinomycetes and the structural classes, biological activities of SMs. Among all the actinomycetes listed, members of Streptomyces (68%), Micromonospora (6%), and Nocardiopsis (3%) are dominant producers of secondary metabolites. Additionally, alkaloids (37%), polyketides (33%), and peptides (15%) comprise the largest proportion of natural products with mostly antimicrobial activity and cytotoxicity. Furthermore, the data analysis and clinical information of SMs have been summarized in this article, suggesting that some of these actinomycetes with multiple host organisms deserve more attention to their special ecological status and genetic factors.

Actinomycetes are Gram-positive bacteria with a GC-rich linear genome and have proven to be a rich source of secondary metabolites (SMs) of broad structural diversity and biological properties [1]. The ocean has been demonstrated as an ecosystem with many unique forms of actinomycetes [2]. The diversity of marine actinomycetes is determined by the uniqueness of the marine environment: some live freely in seawater, some in the seafloor sediments or sea mud; and some are symbiotic, parasitic, endophytic, or epiphytic with marine organisms [2][3]. Compared with actinomycetes isolated from seawater and sediment samples, recent reports of secondary metabolites from marine actinomycetes associated with a variety of aquatic organisms, including invertebrates such as sponges, corals, ascidians, echinoderms, and vertebrates such as pufferfish, as well as algae and seaweed, have increased significantly [4]. Studies have indicated that multiple active compounds previously isolated from marine invertebrates were possibly produced by their symbiotic microorganisms, especially actinomycetes [5][6][7]. With interactions of the host and having special ecological status, the actinomycetes associated with marine organisms have more potential to produce active metabolites acting as chemical defenses to protect the host from predators and microbial infection.

The objective of this article is to provide an overview of the natural products from actinomycetes associated with marine animals, marine plants, macroalgae, cyanobacteria, and lichens. The present entry was not only summarizing the structural classes and biological activities of SMs but also highlighted the taxonomic diversity of actinomycetes, as well as the data analysis of integrated above information. Some of these metabolites with excellent activity are expected to become new drugs such as antibiotics, antineoplastic drugs, or anticancer drugs. Therefore, actinomycetes with multiple host organisms deserve more attention to their special ecological status and genetic factors.

Marine actinomycetes are abundant in species and widely inhabit sediments, seawater, and aquatic organisms. At present, these actinomycetes are mainly separated from marine invertebrates especially sponges, ascidians, corals as well as brown algae. It is presently estimated that only 1% of microbes can be separated using traditional culturing techniques, making the potential for this field more compelling [2][6]. However, emerging technologies provide us with the tools to determine overall microbial diversity. As the diversity of metabolites is closely related to biodiversity, the potential for obtaining abundant and novel SMs from actinomyces associated with various marine hosts is relatively high.

The biosynthesis ability of actinomycetes in the production of complex natural products has been known for a long time. Not all actinomycetes, however, are prolific secondary metabolite producers. To assess the diversity and distribution of natural product-producing actinomycetes associated with various marine hosts, it constructed a neighbor-joining phylogenetic tree of 16S rRNA gene sequences. It obtained these associated actinomycetes producing natural products from literature and the antiSMASH database and selected strains with a length of 16S rRNA sequences > 900 bp that were available in the NCBI database to construct the phylogenetic tree. The phylogenetic tree involved 84 strains within nine families, and the family Streptomycetaceae ( Streptomyces ) represents 67% of the actinomycetes, followed by Micromonosporaceae ( Salinispora and Micromonospora ), Pseudonocardiaceae ( Saccharopolyspora ) with 18%, 5% of actinomycetes, respectively, indicating the better potential of those three families to produce SMs ( Figure 1 ). 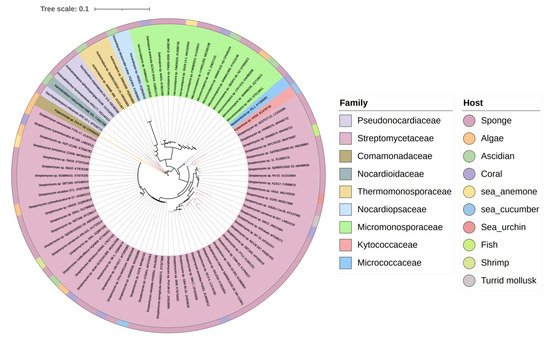 Figure 1. Neighbor-Joining phylogenetic tree based on 16S rRNA gene sequences of natural product-producing actinomycetes. The aligned sequences were analyzed by the bootstrap method with a bootstrap number of 10,000. The colored labels indicate the classification of actinomycetes; the outer color strip shows their host sources.

3.1. Natural Products of the Actinomycetes Derived from Marine Animals

Two novel indolocarbazole alkaloids, 4'-N-methyl-5'-hydroxystaurosporine (1) and 5'-hydroxystaurosporine (2), as well as the known staurosporine (3) (Figure 2) were purified from the culture broth of Micromonospora sp. L-31-CLCO-002, which was associated with marine sponge Clathrina coriacea collected offshore Fuerteventura (Canary Islands). These compounds displayed cytotoxicity against various tumor cell lines[9][10]. The analysis of structure-activity relationships of staurosporine and its derivatives demonstrated that hydroxylation at C-3 of the indolocarbazole moiety led to the increase in anti-proliferative activity, while hydroxylation at C-11 caused a decrease in activity. The results suggested that not only the presence/absence of hydrophilic substitutions but also the position of the alteration within the molecule is significant in the anti-proliferative activities of the various staurosporine analogs [11][12]. 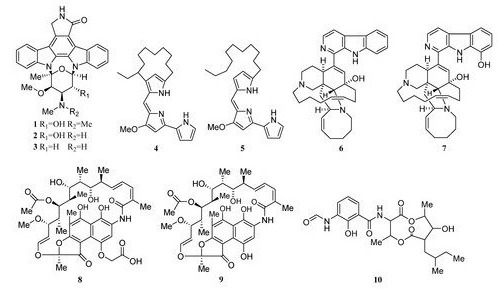 Isolation of two rifamycins B and SV (8, 9) (Figure 2) was reported in 2006 from the Salinispora sp. strain M403 associated with sponge Pseudoceratina clavata. This is the first recorded source of rifamycins from marine bacteria and Salinispora sp. represents a potential new source of rifamycins outside the genus Amycolatopsis. Rifamycins are a group of antibiotics that belong to the ansamycin family with pronounced activities against Gram-positive bacteria[9][13]. The structure and activity relationship of rifamycins with many different targets have been extensively studied[14][15] . The rifamycin SV has been successfully widely used in the clinical treatment of tuberculosis, leprosy, and mycobacterial infections.

3.2. Natural Products of the Actinomycetes Derived from Marine Plants, Macroalgae, Cyanobacteria, and Lichens

Streptomyces cyaneofuscatus M-27 and Streptomyces carnosus M-40 were associated with diverse intertidal marine brown macroalgae (Phyllum heterokontophyta, Fucus spiralis, and Cystoseira baccata) from the central Cantabrian Sea. Streptomyces cyaneofuscatus M-27 produced several antitumor antibiotics of the anthracycline family, of which two antibiotics were identified as daunomycin (307) and cosmomycin B (308) (Figure 3). And it also led to the isolation of an antifungal macrolactam maltophilin (309) (Figure 19). In addition, lobophorine B (310) (Figure 3) was separated from Streptomyces carnosus M-40 derived from macroalgae Cystoseira baccata with anti-inflammatory and antituberculosis properties[16]. 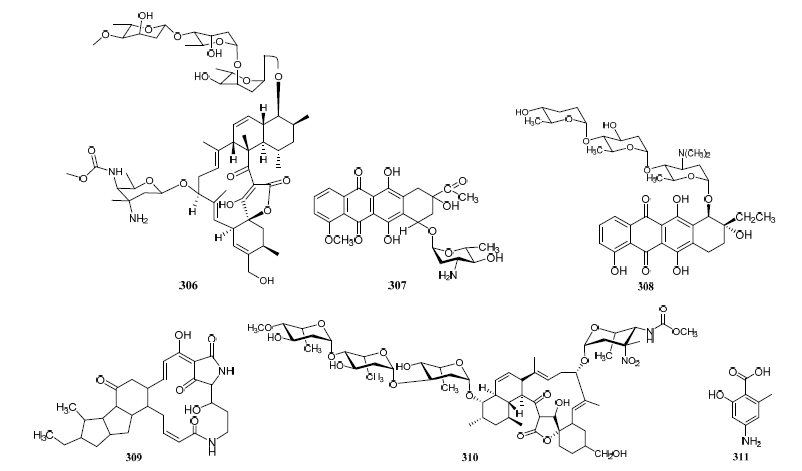 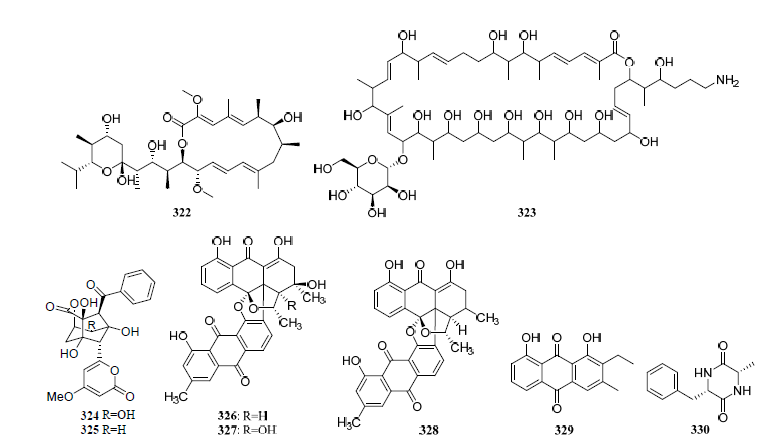 Isolation of antibiotic Bisanthraquinones (326–328) (Figure 3) was reported from Streptomyces sp. N1-78-1 associated with unicellular cyanobacteria parasitized on the tunic surface of Ecteinascidia turbinate collected in La Parguera, Puerto Rico. The metabolites 326 and 327 potently inhibited the growth of MRSA. All compounds were moderately active against HCT-116 human colon tumor cells [17].

3.3. Data Analysis of the Secondary Metabolites from Actinomycetes Associated to Various Hosts

Approximately 64% of the SMs displayed various biological activities, especially antimicrobial activity and cytotoxicity (Figure 8). Interestingly, some of these active metabolites with multiple biological properties deserve more attention (Table S7); for example, metabolites with cytotoxicity usually have antibacterial or antiparasitic activities, and some metabolites showed antibacterial activity can also act as enzyme inhibitors. This study advances the knowledge of these actinomycetes in respect to the metabolic potential of medicinal lead compounds.

3.4. Clinical Information of the Secondary Metabolites

Molecules with excellent activities, which have been in clinical applications or have entered clinical trials, were listed in Table 1. For example, rifamycin SV (9) is the earliest rifamycin antibiotic used in clinical application. Tetrodotoxin (105) has been widely used as an analgesic, sedative, antispasmodic, and local anesthetic in clinics. And daunomycin (307) has a good effect on acute myeloid leukemia. In addition, for these drugs already in clinical use, more clinical trials are underway for new diseases or new usages. (More detailed information can be found on the website ClinicalTrials.gov accessed on 25 October 2021). 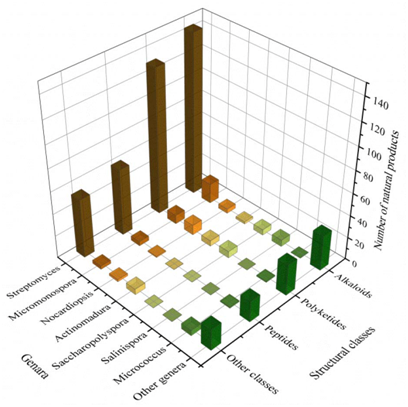 Figure 4. The structural distribution of metabolites from the actinomycete is divided by genera. 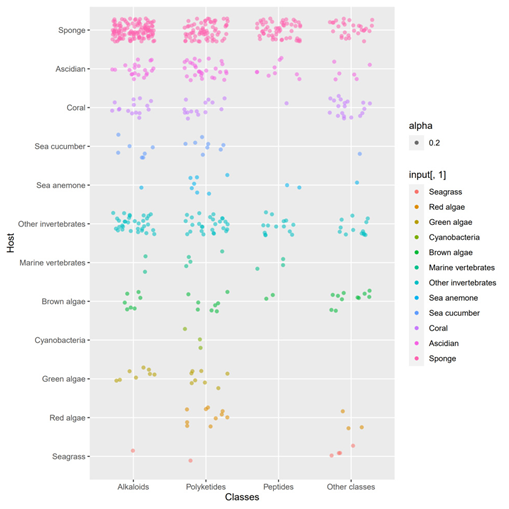 Figure 5. The structural distribution of metabolites from actinomycetes associated with various hosts. The dots in that figure represent the number of compounds and the color darkens when the dots overlap. 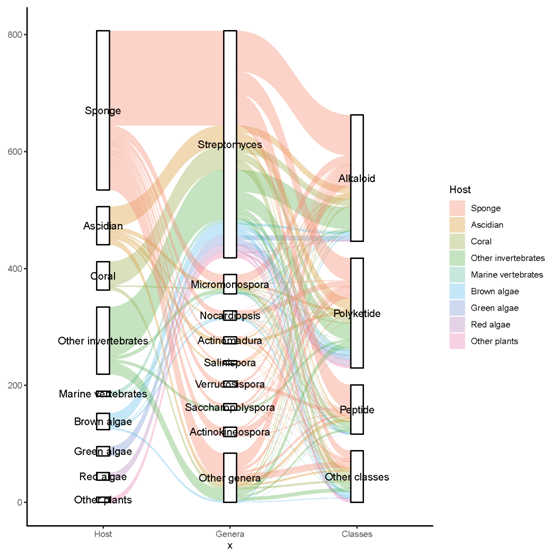 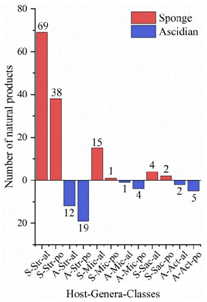 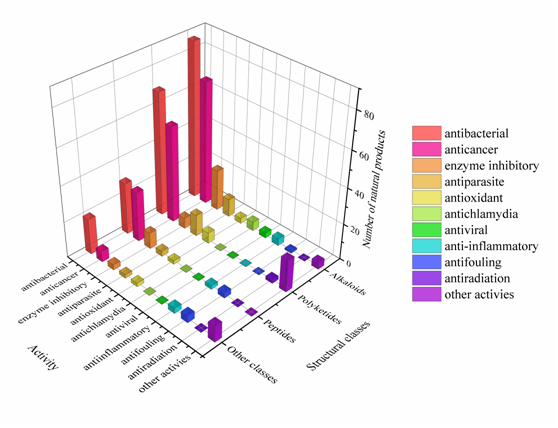 Figure 8. The diversity distribution of biological activity with different structures. 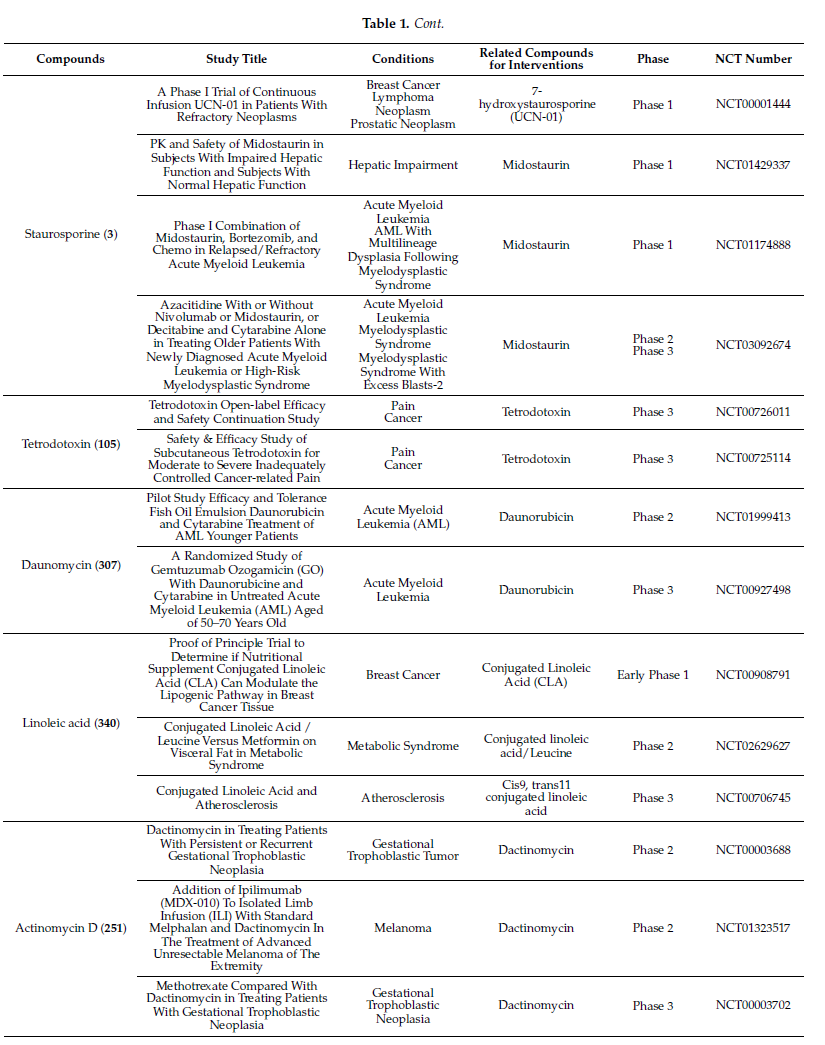 More
© Text is available under the terms and conditions of the Creative Commons Attribution (CC BY) license (http://creativecommons.org/licenses/by/4.0/)
Upload a video for this entry
Information
Subjects: Pharmacology & Pharmacy
Contributor MDPI registered users' name will be linked to their SciProfiles pages. To register with us, please refer to https://encyclopedia.pub/register :
Bingnan Han
View Times: 52
Revisions: 2 times (View History)
Update Time: 22 Nov 2021
Table of Contents
1000/1000
Hot Most Recent