Submitted Successfully!
Thank you for your contribution! You can also upload a video entry related to this topic through the link below:
https://encyclopedia.pub/user/video_add?id=16184
Check Note
2000/2000
Phycobiliproteins
Edit
This entry is adapted from 10.3390/plants10112358

Phycobiliproteins are gaining popularity as long term, high value natural products which can be alternative to synthetic products. This study analyzed research trends of phycobiliproteins from 1909 to 2020 using a bibliometric approach based on the Scopus database.

Keywords are the basis of bibliographic research of academic literature [1]. Keyword analysis indicates researchers’ emphasis on a specific study topic, making it an important component of bibliometric analysis [2]. The visualization network map (Figure 1) was created with VOSviewer to assess the occurrence relationships between the keywords collected from phycobiliprotein research articles [3]. Five clusters with different colors were determined in the keyword map, with a high degree of overlap. 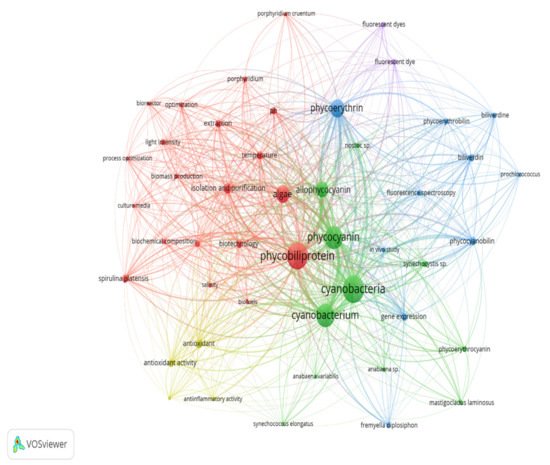 Figure 1. The bibliometric map based on total co-occurrence analysis with network visualization from 1909 to 2020 (minimum occurrences: 20). 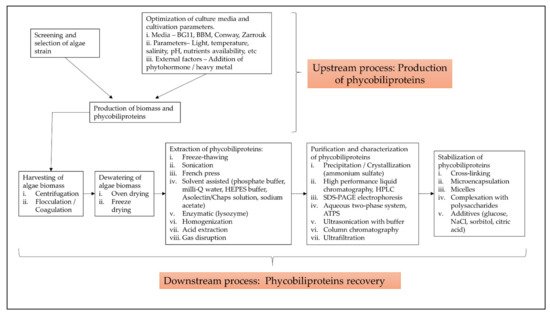 The third cluster (Figure 1, in blue) focused on the gene expression of the phycobiliproteins biosynthesis pathway. The biosynthesis of phycobiliproteins occurs via transcription, translation, and posttranslational pathways, which included the synthesis of amino acids, proteins, and phycobilins, as well as the ligation of phycobilins formed to apoproteins during the posttranslational phase (Figure 3) [21][22]. Heme acts as a cofactor in various biological roles, including enzyme activity regulation, and represents the appropriate metabolic path of all bilin biosynthesis pathways [23]. Biliverdin is a common intermediate and precursor in the biosynthesis of bilins [24]. However, biliverdin sometimes will not be an intermediate if the reduction process happens before heme cleavages [24]. Manirafasha et al. [10] and Pagels et al. [6] summarized the mechanism of phycobiliprotein biosynthesis. 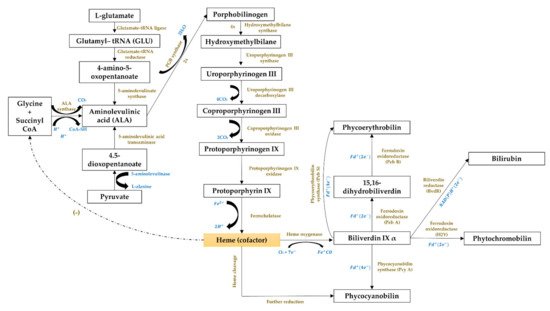 Figure 3. The biosynthesis pathway of phycobiliproteins (adapted from [25][26]).

1.4. Bioactivities and Applications of Phycobiliproteins

The theme of the fourth cluster (Figure 1, in yellow) was phycobiliprotein bioactivities. Natural sources of bioactive compounds are gaining popularity, as they can benefit humans [27]. The rising demand for natural bioactive molecules extracted using a simple approach has sparked the attention of researchers to explore unusual sources, including cyanobacteria [6]. Phycobiliproteins are highly valued natural products with various applications, including medicinal, nutraceutical, food, feed, and cosmetics. The research on phycobiliproteins bioactivities has grown in recent years, yet most of the research was focused on the bioactivities of phycocyanin [28][29][30]. For instance, Fernández-Rojas et al. [31] and Yu et al. [13] reviewed the bioactivities of phycocyanin. Furthermore, Pagels et al. [6] described the bioactivities from phycobiliproteins such as antioxidant capacity, anticancer, anti-inflammatory, anti-diabetes, antibacterial, anti-obesity, and neuroprotector agent. The fifth cluster (Figure 6, in purple) focused on the phycobiliprotein applications especially as the fluorescent dye.

Research frontier refers to a growing trend in research theory and subject content that may be represented using burst keywords [32]. Kleinberg introduced the burst detection approach in 2002. Burst keywords are terms that suddenly increase within a short time [33]. It is possible to reveal the information that does not meet the frequency criteria but has informatics importance in academic advancement using the burst detection approach. It may be more practical and scientific to depict interaction and development trend of research frontiers by identifying hotspots change [34]. CiteSpace (a type of citation visualization software) was used to create the scientific knowledge mapping of burst detection to assess the research hotspots of phycobiliproteins [35][36]. Over time, the research emphases and orientations can be more directly represented by analyzing the changes in the most used author keywords in different periods. This study demonstrated that the earlier publications related to phycobiliprotein were its role in photosynthesis and energy transfer to chlorophyll, resulting in a citation burst of “energy transfer” and “photosynthesis” from 1976  [37][13][38]. Phycoerythrin was widely explored due to its fluorescent properties [39][40]. Furthermore, the application of phycoerythrin and allophycocyanin in flow cytometry has gained prominence since 1986 [41][42]. The majority of the phycobiliproteins were identified in cyanobacteria, especially Arthrospira platensis. The bioactivity properties of phycobiliproteins (specifically antioxidant activity) have piqued the interest of researchers since 2011 and have remained a research frontier until now [6][10]. Economically sustainable and environmentally friendly phycobiliprotein extraction methods have also gained popularity and have helped broaden the consumer acceptability of cheaper and safer natural pigments [8][9][43][44].
Phycobiliproteins are mainly found in blue-green algae, yet could also be found in red algae, cyanelles, and cryptomonads [6]. Most researchers used blue-green algae for their phycobiliproteins research, whereas only two red algae genera out of ten were exploited. The recent studies on red algae investigated the structure of phycobilisome in Griffithsia pacifica and the structural basis of energy transfer in phycobilisome of Porphyridium purpureum [45][46]. The Arhtrospira genus was the most used model organism. The Arthrospira genus is broadly recognized for its high phycocyanin content [10]. In addition, Arthrospira maxima has been commercially utilized as a food since 1521 [47]. The oldest records of production of Arthrospira biomass for human consumption are from the Aztecs [48]. Furthermore, Arthrospira has also been exploited as a protein supplement by the Kanembu tribe of Africa near Lake Chad since 1940 [49]. Synechococcus is an unicellular and euryhaline cyanobacterium [50]. Synechococcus is the most plentiful (up to 105 mL−1) and widespread picophytoplankton genus in the open ocean [51]. It is commonly used as a model organism to study cyanobacterial metabolism, particularly photosynthetic research, and has the potential for biotechnological uses [51][52]. It is also touted as a phycocyanin and phycoerythrin-rich genus [53]. Furthermore, it has a fast growth rate and an extraordinary resistance to high light irradiation [50]. Hence, these characteristics of Synechococcus favored most researchers in selecting this cyanobacterium for their study. On the other hand, Synechocystis and Nostoc genus are the other blue-green algae frequently employed in phycobiliproteins research due to their high nutritional values, and they are widely commercialized. Synechocystis has received attention in modeling studies and biotechnological applications due to a variety of characteristics including its fast growth, the potential to fix carbon dioxide into valuable products, and the relative simplicity of genetic modification [54]. Despite Synechocystis, the Nostoc genus is employed as a food and feed supplement in Mongolia, China, and South America [49]. Nostoc commune has long been recognized as a worldwide nutritious meal and traditional medicine [55]. A wide variety of notably pharmacological and protective physiological properties of the Nostoc genus aroused the attention of researchers [55]. On the other hand, the number of algae commonly claimed as toxic genera (Microcystis, Anabaena, Phormidium, and Nostoc) was lower than the nontoxic algae genera (Porphyridium, Oscillatoria, Gracilaria, Synechocystis, Arthrospira, and Synechococcus). This indicated that more studies were focused on the benefits of cyanobacteria and their bioactivities. Microcystis and Anabaena are the most important toxic cyanobacteria bloom genera in terms of diversity, impact potential, and cascading ecological effects [56][57]. Although numerous microalgae species are available in various culture collections worldwide, only a minority have been thoroughly studied [58]. Strains such as Haematococcus pluvialis (main source of astaxanthin), Dunaliella salina (the major source of beta-carotene), and Spirulina platensis (prime source of phycocyanin), are the examples of microalgae that have finally reached commercial-scale success [59][28][60]. Hundreds of many strains have been described in the literature as sources of phycobiliproteins. However, the lack of strain robustness or low productivity under outdoor environments has been typically cited as the cause of the failure of these strains in achieving commercial-scale production [58].

3. Challenges and Approaches in the Phycobiliprotein Field

The corpus of phycobiliprotein studies has been steadily enhanced and deepened due to the passion and efforts of researchers in studying phycobiliproteins. It gradually evolved from a fundamental and unitary topic to a multiperspective and sustainable development study field involving biology, chemistry, technology, and the environment. The market of phycobiliproteins will most likely continue to develop due to the rising natural product demand, the discovery of novel phycobiliproteins, advancements in the upstream and downstream processes, and expanding of the market potential [10][37]. The present study postulates that phycobiliprotein research would continue to be active and expand in bioactivity properties and applications. To meet the demand of the market, several strategies should be adopted (Figure 4). First, worldwide collaboration should be prioritized in order to conduct higher quality research. Second, most of the phycobiliproteins research is performed on a laboratory scale currently. Until now, China has achieved 200 tons/year production capacity, but the production is only limited to phycocyanin (https://www.binmei-global.com/about-us/ Assessed date: 28 June 2021). To obtain higher efficiency of growth and desired biomolecules, it is crucial to optimize relevant parameters in large-scale practical applications and develop optimal conditions of the photobioreactor [61][62]. Third, the major drawback in the use of phycobiliproteins is the high production cost. Additional screening of indigenous and novel cyanobacterial species/strains for high content of phycobiliproteins and fast-growing capability, effective harvesting, and economical purification methods may lower the production cost of phycobiliprotein. Another important aspect of phycobiliproteins research that needs to be highlighted is the taxonomy of algae species and the classification of phycobiliproteins. The use of an “omics” (genomics, metabolomics, proteomics, and transcriptomics) approach in research can enable the identification of species, detection of nutritional strategies, the interaction of symbiotic relationships with bacteria, and the biosynthesis of biomolecules, especially secondary metabolites [63]. These subject matters can help understand the metabolic pathways and regulatory mechanisms triggering the production of phycobiliproteins [61]. Besides, the development and utilization of robust platforms (Dictionary of Natural Products, MassBank, Global Natural Products Social Molecular Networking, and AntiBase) for data exchange and knowledge transfer/dissemination will undoubtedly facilitate new scientific knowledge and know-how [63]. 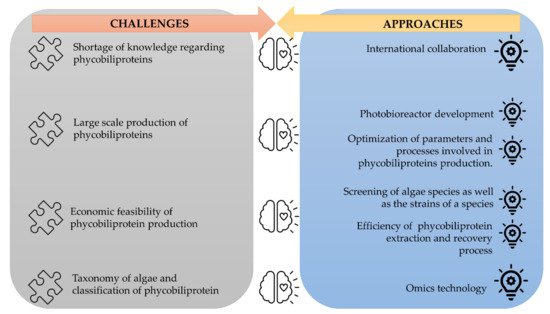 Figure 4. The challenges of phycobiliproteins research and its approaches.

More
© Text is available under the terms and conditions of the Creative Commons Attribution (CC BY) license (http://creativecommons.org/licenses/by/4.0/)
Upload a video for this entry
Information
Subjects: Plant Sciences
Contributor MDPI registered users' name will be linked to their SciProfiles pages. To register with us, please refer to https://encyclopedia.pub/register :
Hui Teng Tan
View Times: 119
Revisions: 2 times (View History)
Update Time: 19 Nov 2021
Table of Contents
1000/1000
Hot Most Recent