Submitted Successfully!
Thank you for your contribution! You can also upload a video entry related to this topic through the link below:
https://encyclopedia.pub/user/video_add?id=16149
Check Note
2000/2000
Duplex Steels
Edit
Upload a video
This entry is adapted from 10.3390/ma14195666

Welded structures made of duplex steels are used in building applications due to their resistance to local corrosion attack initiated by chlorides. In this entry, the material and technological factors determining the corrosion resistance of such steels are discussed in detail.

Modern two-phase ferrite-austenitic duplex stainless steels demonstrate an excellent combination of high strength and relatively high corrosion resistance [1]. Due to their fair ductility, the risk of catastrophic brittle fracture initiation is considerably limited [2]. Nowadays, the particular impulse amplifying the development of new types of duplex stainless steel is driven by increasing demand for crude oil mining from under the seabed. It translates into the need for the design of specific corrosion-resistant oil transmission installations both at offshore platforms and oil tankers. The newest, fourth generation of duplex steels has been designed recently for this purpose [3]. These materials design actions were taken to balance their microstructure and to equalize the ferrite and austenite corrosion resistance [4].

Duplex steels can be divided into five basic categories, depending on the percentage of alloying elements (Cr, Mo, Ni, Mn, Cu, and N — Figure 1). These groups are as follows: 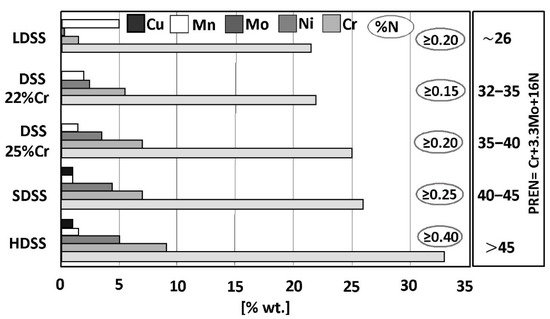 A typical microstructure of properly balanced duplex stainless steel is given in Figure 2. It includes ferritice (dark) and austeniteic grains (light). The chemical composition of duplex stainless steel is limited by thermodynamic stability of austenite and ferrite and also by nitrogen solubility limit. Stability areas of duplex steel with respect to combined Cr + Mo mass fraction are given in Figure 3. Below 20% Cr + Mo, there is a risk of martensitic transformation of austenite. At above 35% Cr + Mo a δ-ferrite instability and formation of harmful secondary phases may occur. Reduction of nitrogen content in hyper duplex steels to maximum 0,4%, which is below solubility limit, is a result of technological difficulties of metallurgic process caused by high nitrogen resilience in liquid steel temperature. 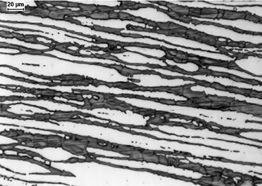 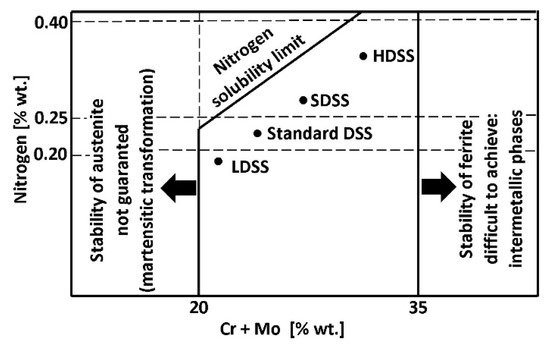 Balanced duplex stainless steels are theoretically located at a 50% ferrite content line in Schaeffler–DeLong diagrams (Figure 4). However, in practice in properly balanced steel microstructure, the ferrite—austenite proportions range may be wider. 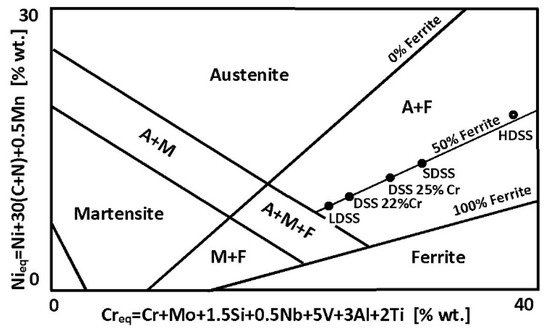 Figure 4. Location of individual categories of duplex steels in the Schaeffler–DeLong diagram.

Duplex steels usually crystallize from a liquid in the form of δ-ferrite. During alloy cooling, the lattice structure stresses increase because of Fe replacement by elements with larger radii, e.g., Ni (Figure 5). 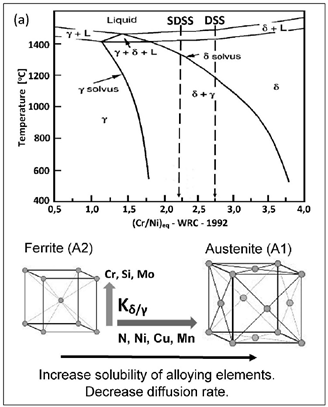 In the areas with a higher concentration of austenite-forming elements, the A2-type ferrite lattice structure is transformed to an A1-type lattice (with 25% larger lattice parameter) at δ-solvus temperature. This phenomenon is accompanied by a decrease in tension and a simultaneous decrease in inter-granular borders energy. This is an enhancing factor for δ → δ + γ transition. Due to the presence of alloying elements, there is an increase in Cr, Si, Mo, W, P concentration in A2-type ferrite lattice and Ni, N, Cu, Mn, C in A1-type austenite lattice. The transition appears to be diffusion-limited. As a consequence, the newly formed austenite assumes a lamellar (island) structure. Out of homogeneous δ-ferrite, a two-phase structure δ + γ is formed, with its components varying from one another in terms of corrosion resistance. Chrome and molybdenum (ferrite formers) strongly increase the electrochemical potential. Consequently, the corrosion resistance is concentrated in ferrite. In austenite, only an interstitial solution of nitrogen can significantly increase the electrochemical potential of steel.

Nitrogen present in most duplex steel increases the kinetics of austenite formation. With increasing nitrogen content, the high-temperature equilibrium δ + γ area expands towards lower Ni concentrations, and the temperature of austenite formation increases. It may increase even to the temperature of liquids, which means crystallization of a small part of austenite directly from the liquid metal. This applies especially to SDSS and HDSS steel grades. For these grades a significant increase in the transformation rate δ → δ + γ occurs, which, with sufficiently rapid cooling, makes it possible to avoid the negative effects of shifting the TTT (Time-Temperature-Transition) curves on the time axis towards the origin of the coordinate system (Figure 6). For this reason, nitrogen-rich steels can be cooled in the temperature range of 800–1200°C, without the fear of exceeding the final ferrite content above the permissible level of 60%. 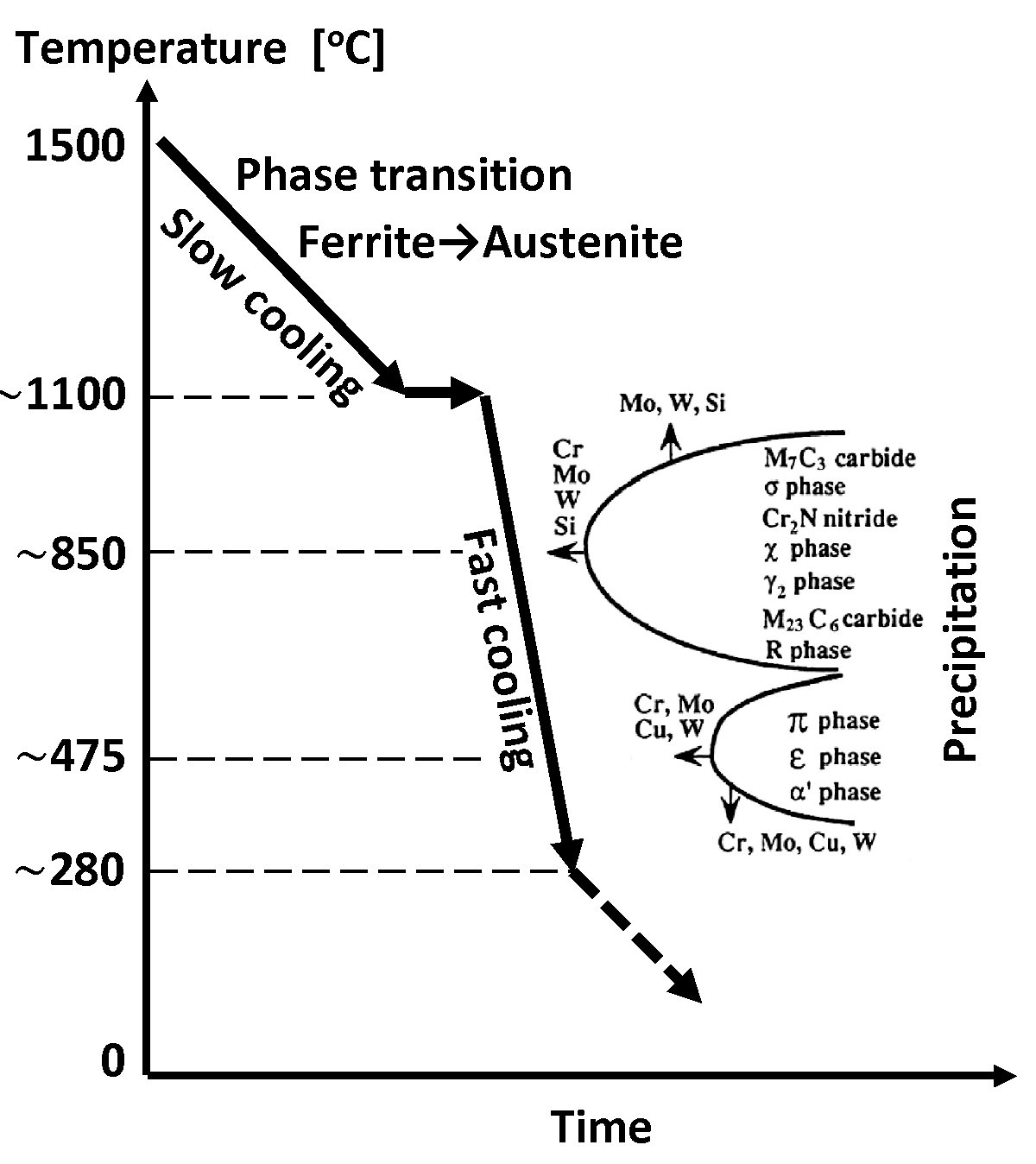 Figure 6. Schematic TTT diagram (specified for the critical range only) typical for duplex steels. The arrows next to the symbols of the elements show the direction of the changes in the steel structure under the influence of that element.

The balanced microstructure of duplex steel is obtained in a two-stage supersaturation heat treatment. The first stage is homogenizing annealing. It is most effective at the temperature of maximum nitrogen solubility in solid solution, which, depending on the steel grade, is 1050–1150 °C. At this temperature, harmful secondary precipitates dissolve in δ-ferrite, and the released atomic nitrogen diffuses into austenite since its solubility in the interstitial solution is many times greater. This applies especially to thick-walled elements made of the SDSS and HDSS steels, where the practical cooling rate can be too low to avoid the precipitation of harmful  secondary phases in the critical temperature range. The second stage is rapid cooling of the steel in water, limiting the possibility of re-separation. As a result, the steel microstructure is balanced and the resistance to pitting corrosion and also the KV impact strength is increased.

The accumulated allowable exposure of the lowest alloying LDSS grade to 1000-800oC temperature range without harmful precipitation may even reach 10 hours. The same exposure for standard 22% Cr DSS grades is usually shortened to circa 30-60 minutes whereas for the most demanding HDSS steel grades it is only 5-10 minutes.

3. Passive Layer and Corrosion Protection Mechanisms Identified as Being Specific to Duplex Steels

Steel pitting corrosion is an electrochemical process that takes place in halide-containing electrolytes. The corrosion of this type (Figure 7) attacks the material locally and quickly perforates through the metal, causing the loss of tightness. It has the highest intensity in stationary solutions due to their uneven saturation with depolarizers, i.e. oxygen or hydrogen ions, and the resulting formation of the so-called concentration cells. The intensity of pitting corrosion increases with the temperature of the electrolyte. Mixing the solution equalizes the depolarizers’ concentration at the metal surface, thereby slowing the progress of corrosion. A permanent polarization of the cell, i.e. blocking the anode or cathode reaction, may stop the progress of such corrosion. 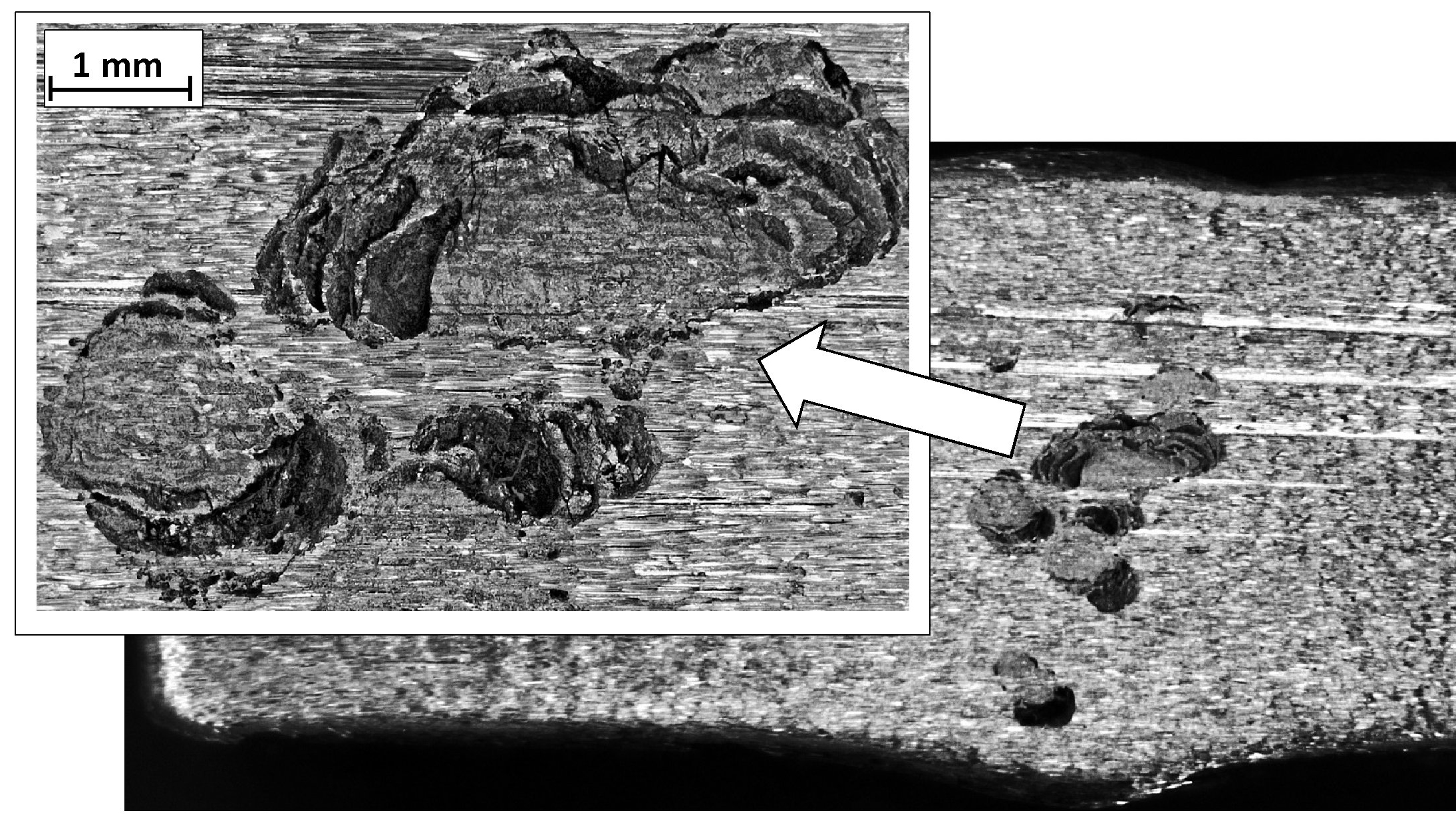 A simplified diagram of the steel pitting corrosion mechanism is shown in Figure 8. At ferrite/austenite interfaces and defects, i.e. non-metallic inclusions (especially sulfide) or secondary phase precipitates (including carbides and nitrides), the passive layer can be easily punctured by aggressive chloride anions. A local, short-circuited corrosion micro-cell is created with a small anode area and a large cathode area. A consequence of the disproportion of the anode surface to the cathode surface ratio is a high anodic current density. Fe2+ ions dissolve into solution and are consequently captured by Cl− anions to form iron chloride (FeCl2). Around the pit, a cathodic depolarization reaction takes place (oxygen-type, hydrogen-type, or both-types), which maintains the operation of the electrochemical cell by balancing the electric charge. 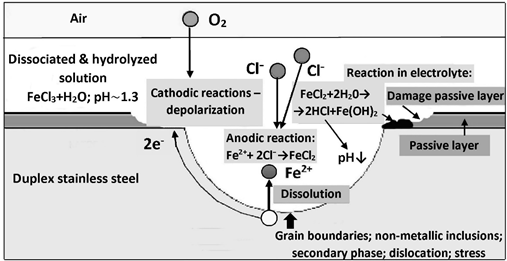 Figure 8. Pitting corrosion mechanism of duplex steel when exposed to chloride attack.
The corrosion protection of Cr-Ni type stainless steels including duplex steel is based on a durable and tight passive layer. The passive layer should be chemically inert to an aggressive environment. The passive layer in the oxidizing environment forms itself spontaneously and reaches a thickness of 2–4 nm. It has an ability to self-rebuild (re-passivation ability). The most important role is played by Cr, which forms a complex oxide (Fe, Cr)2O3 on the steel surface. The minimum content of Cr in Cr-Ni type steels to form the passive layer is 10.5%. The higher the Cr fraction in (Fe, Cr)2O3 is, the tighter and more corrosion resistant the passive layer is. Mo and N are incorporated into the passive layer in a lesser content. Molybdenum has a nobler electrode potential compared to Cr. It can form MoO2 and MoO(OH). Nitrogen may be present in the passive layer in the form of anions. As such, it may inhibit surface adsorption of negative Cl− anions. A synergic activity of Mo and N is observed increasing the duplex steel pitting resistance to a greater extent than it would be expected from the cumulative content of both elements separately.
The oxidation of steel surface during welding is accompanied by migration of Cr and Mo to the surface layer. This, in turn, lowers the electrochemical potential of the metal under the passive layer and increases the risk of corrosion previously initiated. The chemical etching and passivation of the welded joints surface are an effective way to counteract this threat. Nitrogen dissolved in the steel reacts with H+ to form NH4+, thus partially neutralizing the acidic pH of the corrosive medium within the pits, limiting their growth. It is believed that this may be the mechanism of active corrosion protection of austenite over which a thinner passive layer forms.

In the right of Figure 1, the values of Pitting Resistance Equivalent Number (PREN) have been given for each group of duplex steels. This index is used to evaluate the pitting corrosion resistance of the steels in a chloride environment. The PREN indicator refers to the thermodynamically stable steels, i.e., the steels after their final heat treatment. In the case of duplex steels, the following formula given by Herbsleb is used to calculate the value:

In this equation Cr, Mo, and N are weight percentages of the corresponding elements. For SDSS and HDSS steels, which contain W or Cu, different formulae may be used. These are as follows:

In these formulae, the content of a particular alloying element is given in its mass percentage (%wt.). 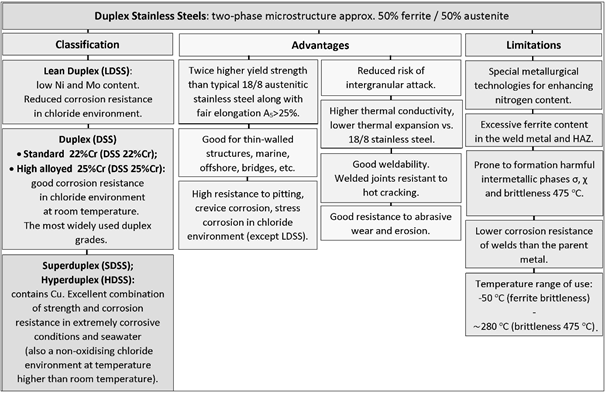 The appropriate use of duplex steel demands the welding engineers perform thoughtful actions based on well-established engineering knowledge. A commonly applied routine-based approach to welding admittedly leads to obtaining the expected mechanical properties of welding joints. Nevertheless, it does not guarantee the concurrent obtaining of required corrosion resistance for the joints. It is known that the corrosion resistance of joints in the chloride environment impact zone reaches only 50%–80% of the parent material corrosion resistance