Submitted Successfully!
Thank you for your contribution! You can also upload a video entry related to this topic through the link below:
https://encyclopedia.pub/user/video_add?id=16063
Check Note
2000/2000
Ocular Therapeutics and Molecular Delivery Strategies
Edit
Upload a video
This entry is adapted from 10.3390/ijms221910594

Photodynamic therapy (PDT) involves activation of a photosensitizer by photon irradiation that generates reactive oxygen species (ROS) that selectively occlude CNV in the target ocular segment. It has found extensive applications in exudative AMD treatment before the rise of anti-VEGF therapy. Visudyne® is a liposomal formulation of a hydrophobic photosensitizer, Verteporfin that was approved for nAMD administration by the US FDA in 2000.

Age-related macular degeneration (AMD) is the leading cause of vision loss in developed countries with prevalence rates ranging from 5–40% based on ethnicity [1][2]. In 2020, around 200 million people were suffering from AMD, and projections are nearly 300 million in 2040 worldwide [1][2]. The pathophysiology of AMD includes inflammation mechanisms affecting the retina coupled with oxidative stress. The disease is broadly classified into dry AMD and wet AMD. Dry AMD could progress into wet AMD (neovascular AMD) after the progression of new blood vessels into the retina and subretinal space. Subsequently, these vessels cause bleeding, leakage of serum and fluid retention, distortion in vision, and central vision loss after progression [3]. Various treatment modalities are under consideration, intravitreal biologics (Bevacizumab, Ranibizumab, and Aflibercept) being the standard treatment of care given as intravitreal injections. The intravitreal injection (IVT) route is currently in use for anti-VEGF (Vascular Endothelial Growth Factor) agents. It is an invasive route and causes difficulty to patients, but alternative clinical outcomes are bleak at present [4][5]. Various administrative routes are explored, such as periocular, suprachoroidal, sub-retinal, systemic, and topical routes for the delivery of small molecules, biologics, and gene therapy [6]. Molecular therapies such as cell therapy and gene therapy are in focus due to their restoration ability [7][8][9][10]. AMD is a disease of the posterior eye segment which brings various challenges. There are two basic ways to improve the therapeutic outcome: prolonged delivery of intravitreal drugs and use of various other routes [5]. There were numerous attempts to deliver drugs and biologics from the topical routes due to its simple and non-invasive administration. However, the barriers in delivering biologics to the cornea (Absorption, Distribution, Metabolism, and Excretion (ADME); degradation of biologics; and their interactions with corneal layers) currently prevent the exploitation this route [11]. In general, biologics have longer half-lives in vitreous, and small molecules have shorter half-lives. If the patient misses the clinician’s appointment for any reason, the IVT therapy could decrease the efficacy, hence the need for long-acting injectables or implants. In recent years, nanoparticles (NPs) have been extensively investigated and used in drug delivery and biomedical application [12][13][14][15]. Several delivery vehicles are reported in the literature including, micelles, nanoparticles, polymersomes, liposomes, and reviews on the details of nanoparticle preparation and characterization, including their evaluation with respect to storage stability, toxicity potential, and in vivo fate [16][17][18][19][20][21]. Recently, we have reported a comprehensive review on “Nanodiagnostics and Nanotherapeutics for Age-related macular degeneration” [22] and hence this will not be discussed here. In the present review, we highlight preclinical and clinical studies of wet AMD treatment modalities such as anti-VEGF therapy, including antibodies, bispecific antibodies, small molecules, photodynamic therapy, radiation therapy, gene therapy, and cell therapy. We are also providing information on sustained-release strategies and pharmacokinetics aspects to reduce the need for frequent injections [23].

A broad spectrum of classification models has been developed for medical and research purposes to distinguish between the various manifestations of AMD. However, there exists no specific classification system that is accepted worldwide [24]. According to one convention, macular degeneration can be broadly classified as wet AMD and dry AMD [25]. Wet AMD, or neovascular AMD (nAMD), is an exudative degeneration that is caused by hyper-expression of VEGF along with rapid and progressive angiogenesis [26]. Pathophysiological features in neovascular AMD are shown in Figure 1 . Dry AMD is a non-exudative degeneration that is defined as the accumulation of “drusen” underneath the maculae [27]. Among the cases diagnosed, ~90% of the occurrences are associated to dry AMD whereas ~10% of cases are due to nAMD, mostly as all early forms of AMD are considered as dry AMD. Studies have depicted that 10–15% of non-neovascular AMD cases may progress into wet AMD [28][29]. 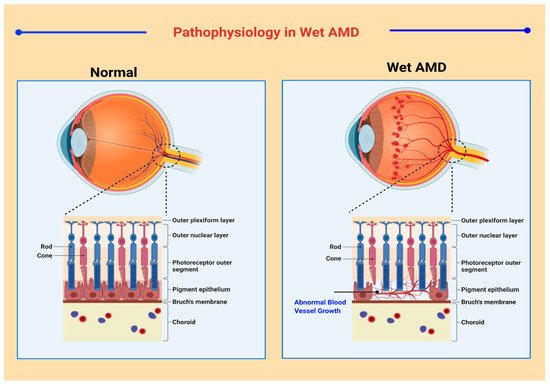 The Wisconsin age-related maculopathy (ARM) [30] system, a convention based on the photographic retinal grading approach was adopted by The International ARM Epidemiological Study [31] to reinvent AMD diagnosis. The grading procedure was described by nominal or modest non-exudative age-related macular changes. According to the ARM criterion, the presence of retinal pigment epithelium (RPE) atrophy was requisite to signify the manifestation of wet AMD. Another rigorous classification protocol has been described in the Age-Related Eye Disease Study (AREDS). This study divided the occurrence of AMD into four classes based on protein drusen attributes. Drusen were categorized based on its average diameter into small (63 μm and less), intermediate (63–124 μm), and large (125 μm and more). According to the AREDS, class 1, or no AMD, specifies that there exist less than five small drusen; class 2, or early AMD, specifies that there exists many small drusen or few intermediate-sized drusen; class 3, or intermediate AMD, is characterized by multiple intermediate drusen or few large-sized drusen and non-foveal GA without pigmentary atrophy; and class 4, or advanced AMD, is denoted by foveal GA and pigmentary atrophy, vision impairment due to CNV occurrence, and visual acuity lower than 20/32 in either eye [32][33]. A non-clinical system has been developed by Klein et.al. It bases its categorization on variations in demography and involves phenotypic and genetic considerations [34].

Another critical factor that has been evidenced in the pathogenesis of AMD is the intraocular inflammatory signals. This indicates that certain anti-inflammatory agents may play a role in the regression of the macular degeneration. The results from Blue Mountains Eye study [35] concluded that there was no apparent association between AMD prevalence and the administration of systemic non-steroidal anti-inflammatory drugs (NSAIDs).

A recent proof of concept clinical research study (NCT03022318, NCT03023059) concluded that levodopa oral formulation was safe and well-tolerated. In the case of patients taking anti-VEGF injections, the injection frequency was reduced. The application of levodopa as an adjuvant needs further evaluation due to the low sample size and limited racial diversity [36]. Levodopa acts as a ligand for G-protein coupled receptor (GPR143), upregulates the PEDF, and downregulates the production of VEGF [37][38][39].

Photodynamic therapy (PDT) involves activation of a photosensitizer by photon irradiation that generates reactive oxygen species (ROS) that selectively occlude CNV in the target ocular segment [40]. It has found extensive applications in exudative AMD treatment before the rise of anti-VEGF therapy. Visudyne ® is a liposomal formulation of a hydrophobic photosensitizer, Verteporfin that was approved for nAMD administration by the US FDA in 2000 [41]. Photodynamic therapy is generally used as alternative therapy or adjunct therapy along with anti-VEGF injections according to various country guidelines [42][43]. Table 1 summarizes the photodynamic therapy and delivery strategies for nAMD.

Studies suggest that, though VEGF inhibitors exhibit rapid therapeutic activity, it is restricted by several limitations. However, this drawback can be potentially overcome by the concurrent administration of anti-VEGF drugs and radiotherapy. As radiotherapy involves a major time lag and a prolonged duration of action, it can potentially augment the therapy of AMD in theory [64]. However, clinical trials and comparative studies negate such predictions and provide ambiguous conclusions. Recent clinical trials suggest that monotherapy of VEGF inhibitors is still superior to the combination therapy of anti-VEGF drugs and radiation therapy. Such results necessitate deeper understanding and large-scale trials to obtain accurate therapeutic results [65]. Table 1 summarizes the combination therapy of anti-VEGF agents with radiation for nAMD. In a 12 month follow-up study, comparing radiotherapy combined with anti-VEGF and anti-VEGF alone concluded that effectiveness for treating wet AMD was uncertain as to whether radiotherapy on its own, or with eye injections of anti-VEGF, was more beneficial [66].

Over the past few decades, the irremediable blindness due to the fast progression of nAMD in the geriatric population has led researchers to shift their focus from intravitreal anti-VEGF biologics (Bevacizumab, Ranibizumab, Aflibercept, and Brolucizumab) to advanced therapeutic strategies that possess an improved safety and efficacy profile accompanied with minimal adverse effects. One step in this direction involves the exploration of therapy requiring administration of small molecules (Tyrosine Kinase Inhibitors and anti-inflammatory molecules), biologics, and gene products. In 2017, Luxturna® is approved for Leber’s congenital amaurosis (LCA) genetic disease, may boost further interest in gene therapy. Several research groups are focused on the progression of non-invasive delivery and sustained release strategies for the posterior segment. The Port Delivery System seems to be the front-runner in the long-acting strategy. Several particulate systems are under clinical and preclinical development. However, pre hand information of potency and dosage requirements are crucial in the success of such technologies. Most studies reported in this space are rather observational; quantitative estimations and mass balance of molecules kinetics is often missing. The therapeutic interest in radiation therapy is declining rapidly due to the emerging biologics. At present, bispecific antibodies are being continuously explored, and the first step towards their commercialization requires the reduction in the ocular cytotoxicity, followed by thorough investigation in clinical trials to expand the scope of therapy. BYOOVIZ™ (SB11), a biosimilar referencing LUCENTIS ® (Ranibizumab), recently approved by the U.S. Food and Drug Administration (FDA), may reduce the cost of treatment. Though anti-VEGF therapy has many challenges, it is going to remain the primary treatment until one of the described therapies effectively replaces it and subsequently improves patient compliance.

More
© Text is available under the terms and conditions of the Creative Commons Attribution (CC BY) license (http://creativecommons.org/licenses/by/4.0/)
Upload a video for this entry
Information
Subjects: Biochemistry & Molecular Biology
Contributor MDPI registered users' name will be linked to their SciProfiles pages. To register with us, please refer to https://encyclopedia.pub/register :
Vijayabhaskarreddy Junnuthula
View Times: 29
Revisions: 2 times (View History)
Update Time: 17 Nov 2021
Table of Contents
1000/1000
Hot Most Recent