Submitted Successfully!
Thank you for your contribution! You can also upload a video entry related to this topic through the link below:
https://encyclopedia.pub/user/video_add?id=16033
Check Note
2000/2000
Cytoskeleton Reorganization in EndMT
Edit
Upload a video
This entry is adapted from 10.3390/ijms222111607

EndMT-derived cells, known as the myofibroblasts or cancer-associated fibroblasts (CAFs), are characterized by the loss of cell–cell junctions, loss of endothelial markers, and gain in mesenchymal ones.

The vascular endothelium is composed of a monolayer of tightly connected endothelial cells that cover the interior surface of blood vessels. It is not only the barrier located between circulating blood and tissues but also a vital organ involved in numerous functions. Under physiological conditions, the endothelium maintains cardiovascular homeostasis via a wide range of biologically active substances such as cytokines, chemokines, and growth factors [1]. It is mainly involved in the regulation of vascular tone, fluid homeostasis, and host defense [2]. Unfortunately, chronic inflammation, oxidative stress, and shear stress cause disorders of endothelium function that induce procoagulant properties, leading to severe sepsis. They are also responsible for sickle cell disease, macular degeneration, prematurity, or diabetic retinopathy [3]. Endothelial dysfunction leads to atherosclerotic lesions and, consequently, an increased risk of cardiovascular events such as idiopathic pulmonary arterial hypertension, stroke, infarction, or heart failure [4]. There is a growing amount of evidence that endothelial cells can serve as sources of myofibroblasts in fibrosis, such as cystic, kidney, heart, dermal, pulmonary, and intestinal fibrosis, as well as cancer-associated fibroblasts (CAFs) in neoplasia [5][6][7][8][9][10][11][12][13][14][15].
It has been estimated that around 45% of natural deaths yearly can be associated with different fibrotic disorders in the USA [16]. Organ fibrosis is a common pathological state of slightly known etiology, resulting in chronic tissue injury defined as an increasing production and deposition of extracellular matrix (ECM) components [17]. Chronic inflammation causes fibrosis tissue to recruit numerous activated fibroblasts called myofibroblasts. The myofibroblast was initially described in the granulation tissue of wound healing as the cells with prominent cytoplasmic microfilament bundles and peripheral focal adhesions. Electron microscopy revealed that myofibroblasts characterized the abundant expression of α-SMA, the isoform of actin specific for smooth muscle cells [18]. Myofibroblasts are a heterogeneous group of cells with a comprehensive source of cells, including fibroblasts, circulating bone marrow-derived cells, and epithelial or endothelial cells [19]. They are characterized as α-SMA-positive myofibroblasts, which are the principal source of the enormous extracellular matrix (ECM), including collagen type I, fibronectin, hyaluronan, and elastin [19][20][21]. In turn, cancer-associated fibroblasts (CAFs), a type of activated fibroblast located in the cancer niche, are cells with significant heterogeneity and plasticity. CAFs are widely described as the leading promoter of tumor progression and metastasis. It should be mentioned that CAFs may also have certain tumor-suppressive functions in the early stage of tumors [22].
Fibrosis and neoplastic disease are two distinct and distant disease entities. However, they have a common denominator: the excessive deposition of ECM proteins by myofibroblasts/CAFs, which changes the homeostasis within the niche. One of the well-known sources of myofibroblasts/CAFs is endothelial cells transdifferentiated into them by the endothelial–mesenchymal transition (Figure 1). 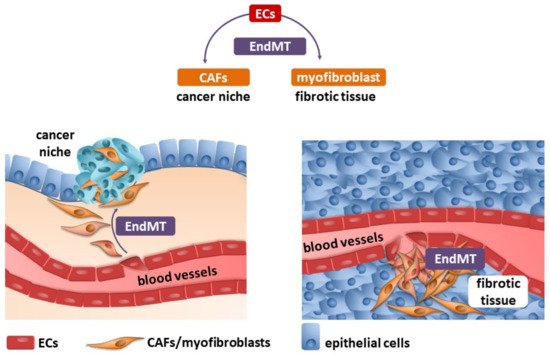 Figure 1. Endothelial cells (ECs) undergo an endothelial–mesenchymal transition (EndMT), which are the source of cancer-associated fibroblasts (CAFs) and myofibroblasts (detailed description in the text).

The endothelial–mesenchymal transition (EndMT) was initially observed during heart development [23][24]. Several inflammatory mediators, including pro-inflammatory cytokines (e.g., interleukin 1-β, IL 1-β; tumor necrosis factor-α, TNF-α), growth factors (e.g., fetal grown factor, FGF), oxidative stress, shear stress, and toxins, induce the conversion of endothelial cells into mesenchymal fibroblast-like cells that promote disease progression [25][26] (Figure 2, Table 1). EndMT appears to be regulated by complex molecular mechanisms and different signaling pathways. Members of the Tumor Growth Factor-β (TGF-β) family are the most known inducers of EndMT. Three TGF-β members, TGF-β1, TGF-β2, and TGF-β3, act through TGF-β type I and II receptors to form multimeric complexes and subsequently launch the downstream Smad-dependent and Smad-independent signaling pathways [19]. The Smad-dependent signaling pathway is essential for increasing the expression of cell-adhesion-suppressing zinc-finger transcription factors (TF) such as Snail, Twist, Zeb, and Slug [27][28]. In the canonical pathway, induction of TGF-β receptors causes activation of the TGF-β type I receptor that binds and phosphorylates Smad2/3, which interacts with Smad4 to form a transcription complex that translocates to the nucleus and triggers the expression of the genes mentioned above [19]. In addition, certain TGF-β family members (TGF-β2, BMP2, and BMP4) induce EndMT by signaling through the TGF-β type II receptor (TGFBR2) [19]. The in vivo relevance of this mechanism is illustrated by the EC-derived heterotopic ossification observed in patients with fibrodysplasia ossificans progressiva, which is due to an overactive mutant TGFBR2 [29]. The crucial role of the TGF-β super-family in the EndMT induction has been validated in cell line studies and in vivo mice experiments. The knockdown and knockout of several TGF-β signaling-related genes, such as Smad2, Smad3, and TGFBR2, prevented EndMT [29]. 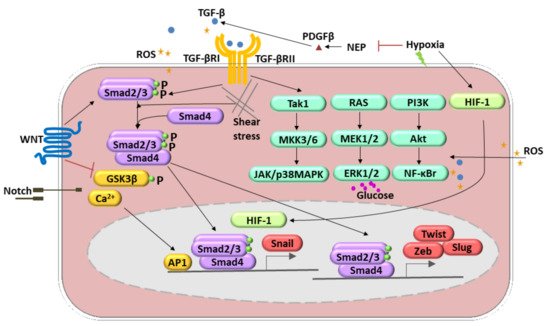 Figure 2. Molecular pathways involved in the endothelial-to-mesenchymal transition (EndMT) regulation. These include transforming growth factor (TGF)-β, TNF-α, BMP, FGF, IL-1 β, Notch, WNT signaling, oxidative stress, and shear stress. TGF-β-induced EndMT involves the canonical Smad2/3 pathway. Additionally, it can activate Smad-independent pathways (1. Tak1, MKK3/6, JAK/p38MAPK; 2. RAS, MEK1/2, ERK1/2; 3. PI3K, Akt, NF-κB). Hypoxia induces EndMT through the effects of HIF-1α activation of Snail1. Shear stress forces (represented by undulating arrows) induce EndMT through several different molecular mechanisms. Other mechanisms include reactive oxygen species (ROS) generation and activation of NF-κB followed by the PI3K, resulting in the increased production and accumulation of ROS (yellow stars). A high level of glucose acts as an ERK1/2 activator and, therefore, regulates the EndMT.
Several other signaling pathways are involved in the induction of the EndMT. The Wnt signal transduction is run via Smad-dependent TGF-β signaling, and canonical (i.e., involving β-catenin) and noncanonical Wnt signaling pathways [30], whereas Notch pathway activation resulted in Snail upregulation [31]. Additionally, it has been shown that Kaposi’s sarcoma-associated herpesvirus causes EndMT via Notch signaling independently of the TGF-β pathway [32]. Within noncanonical pathways, Rho-GTPase-actin and Smad-independent signaling pathways such as Akt/NF-ĸB and MAPK/ERK can be recognized [33][34][35][36] (Figure 2). Recent evidence also suggests that small RNAs, particularly microRNAs (miRNAs) and long noncoding RNAs (lncRNAs), are crucial mediators of EndMT [37]. Hypoxia is the condition able to induce the EndMT. These molecular pathways engage Snail and hypoxia-inducible factor-1 α (HIF-1α) upregulation. Those processes were observed in radiation-induced pulmonary fibrosis [7]. HIF-1 may also decrease neprilysin (NEP) and, in this way, upregulated platelet-derived growth factor (PDGF)-β) and stimulation of TGF-β1 signaling [38]. Reactive oxygen species (ROS) works by differential pathways. They are able to induce TGF-β expression and, therefore, via a positive feedback loop, lead to ROS production. Secondly, ROS might act as activators of nuclear factor-κΒ (NF-κB) signaling that stimulate EndMT synergistically with TGF-β [39]. Moreover, one of the crucial enzymes responsible for ROS production, NADPH oxidase 4 (NOX4), mediated the TGF-β-dependent production of myofibroblasts by EndMT [40].
Table 1. Molecular pathways involved in EndMT.
Shear stress that ensures homeostasis of ECs can modulate the EndMT via TGF-β-dependent signaling independent of its intensity. The in vivo and organ-in-chip experiments have shown that high shear stress appears to inhibit EndMT [41] via extracellular-signal-regulated kinase 5 (ERK5), whereas ERK5 overactivation prevents the EndMT in cells exposed to a disturbed flow or are stimulated by TGF-β under static conditions [45]. Different mechanical stresses, termed cyclic strain, and caused by a perpendicular stretching force on the vessel wall, have been shown to potentiate the EndMT by augmenting both TGF-β and Wnt signaling [42][43]. High glucose concentrations have been shown to cause EndMT, involving extracellular signal-regulated kinase (ERK) 1/2 phosphorylation.
During EndMT, endothelial cells lose their typical phenotype and acquire mesenchymal features, characterized by a shift in endothelial markers toward mesenchymal ones (Figure 3). However, identifying CAFs, it should be remembered that despite many CAF biomarkers, none of them are specific to CAFs [44]. Their expression depends on the cancer type and probably the organ undergoing fibrosis. The endothelial markers commonly include PECAM (CD31), von Willebrand factor (vWF), VE-cadherin (CD144), tyrosine kinase with immunoglobulin-like and EGF-like domains 1 and 2 (TIE1 and TIE2), eNOS, and platelet-derived growth factor (PDGF). To confirm the occurrence of the EndMT, the most often detected mesenchymal markers include α-smooth muscle actin (α-SMA), N-cadherin, calponin, fibroblast-specific protein-1 (FSP-1), vimentin, fibronectin (FN), collagen types I and III, and matrix metalloproteinase 2 and 9 (MMP-2 and MMP-9, respectively). It should be mentioned that other frequently used typical EMT markers, such as E-cadherin, claudin, occludin, and cytokeratin, are not usually used in studies of EndMT [46][47]. 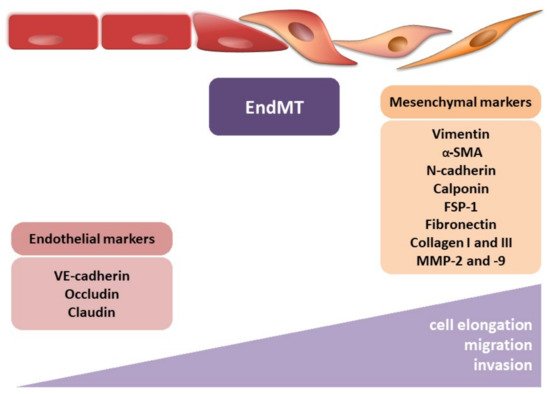 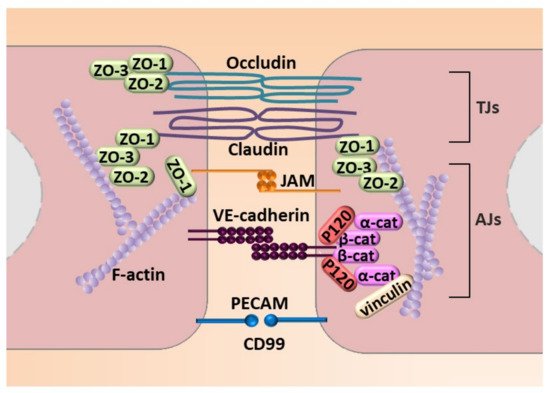 Figure 4. Molecular mechanisms engaged in endothelial cell–cell junction. The figure illustrates adhesion molecules that regulate AJs that consist of VE-cadherin with zonula occludes-1, -2, and -3 (ZO-1, ZO-2, and ZO-3) that interact with a complex of P-120, and a α-cathenin and β-cathenin (α-cat and β-cat, respectively) complex that connects VE-cadherin to stress fibers created by fibrillar actin (F-actin). TJs are created by occludin and claudin and JAM that interacts with ZO-1, ZO-2, and ZO-3. An additional element of cell–cell contact is the PECAM.
Such a reorganization of the cytoskeleton converts EC’s apicobasal polarity toward a front-end back polarity to form spindle-shaped cells with enhanced properties of migration [48] (Figure 3). As a consequence of the processes mentioned above and the influence of the effectors, cell–cell connections are disrupted, and the pro-migratory, pro-inflammatory, and pro-secretory abilities of the cells are increased. That chronic state contributes to the development of fibrotic and neoplastic diseases.

A cellular cytoskeleton is a network of fibrous protein structures forming a scaffold for cell organelles. It plays an essential role in maintaining cell shape, membrane dynamics, intracellular transport, organelle positioning, cell polarization, movement, and division. Three types of structures constitute the basis of the cytoskeleton: intermediate filaments, microtubules (MT), and actin cytoskeleton (microfilaments) [49]. Together with associated proteins regulating their polymerization, motor proteins, and proteins connecting individual elements of the cytoskeleton, these filaments form a functional structure.
The first type of biopolymer is intermediate filaments responsible for ensuring the stability of the cell structure. The primary role of the second type of filament, microtubules, is to counteract mechanical stresses, transport intracellular organelles, as well as build the karyokinetic spindle. The third type of biopolymer is the actin cytoskeleton (microfilaments), which is mainly responsible for cell movement but also cell adhesion and migration [49].
The interrelationship between the cytoskeleton elements and participation in the transmission of environmental stimuli make the cytoskeleton play a key role in the proper development and functioning of tissues and organs, and thus in maintaining homeostasis of the organism [50]. The cytoskeleton is a dynamic system in which both the exchange of subunits in the already existing polymers and the local or global reconstruction of the fiber network take place (possible through the processes of polymerization and depolymerization of individual filaments) [51]. Such cytoskeleton dynamics enables the elimination of damaged subunits or fragments of structures and their replacement by proper units and the reorganization of the cytoskeleton in response to various internal and external stimuli, e.g., during cell division or differentiation and cell migration. Disorders in the proper functioning of the cytoskeleton lead to many serious diseases (e.g., myopathy, neuropathy, ciliopathy, and neoplastic diseases) [52].

As has already been discussed, EndMT is instrumental in the pathogenesis, development, and progression of various human pathologies, including multiple fibrosis and tumors. Due to the above fact, there is great interest in the abolition or modulation of EndMT as a new therapeutic approach for treating these disorders. Indeed, intensive research is currently being carried out focusing on the identification of new compounds, natural substances, and pharmacological agents intended to act as EndMT inhibitors and their use as a potential therapeutic agent in the treatment of various diseases in which EndMT is shown or suggested to play a role in their pathogenesis.
Targets postulated for these inhibitory effects are quite diverse. Still, a reasonably large group includes compounds with the ability to modulate the reorganization of the cytoskeleton as an essential cellular component directly responsible for the implementation of the EndMT process.