Submitted Successfully!
Thank you for your contribution! You can also upload a video entry related to this topic through the link below:
https://encyclopedia.pub/user/video_add?id=15961
Check Note
2000/2000
Myelin Basic Protein Interaction Landscape
Edit
Upload a video
This entry is adapted from 10.3390/biom11111628

Intrinsically disordered myelin basic protein (MBP) is one of the key autoantigens in autoimmune neurodegeneration and multiple sclerosis particularly. MBP is highly positively charged and lacks a distinct structure in solution, and therefore its intracellular partners are still mostly enigmatic. Here authors used combination of formaldehyde-induced cross-linking followed by immunoprecipitation and liquid chromatography-tandem mass spectrometry (LC-MS/MS) to elucidate the interaction network of MBP in mammalian cells and provide the list of potential MBP interacting proteins.

Myelinization of the axons is critical for the rapid conduction of the nerve impulses. Myelin is maintained as a tightly packed, lipid-rich multilayer membrane envelope to function as an electrical insulator. The importance of the myelin membrane is evident in terms of demyelinating diseases such as multiple sclerosis, which lead to severe neurological disability. Myelin is produced by specialized glial cells in both, central and peripheral nervous systems (CNS and PNS, respectively). Genetic abnormalities in myelin genes or an autoimmune destruction of myelin lead to severe neurological damage. Plenty of the lesions developed during dys- or demyelination processes can be associated with the partial violation of the tight interactions of myelin proteins with lipid bilayer. Myelin basic protein (MBP) is one of the most abundant among myelin proteins. It presents in high amount in CNS and PNS in oligodendrocytes and Schwann cells, respectively [1][2]. MBP is a peripheral membrane-associated semisubmersible protein with highly disordered structure in an aqueous solution [3][4][5]. However, number of data indicate that the interaction of MBP with ligands triggers the formation of secondary structures and some degree of MBP folding into a more compacted scaffold [6]. Aggarwal et al. showed that MBP controls biogenesis of myelin by weak forces emerging from MBP’s inherent phase separation ability [7]. The interaction of MBP with the inner part of the membrane bilayer leads to charge neutralization and triggers its self-association into larger polymers and a phase transition to a dense protein network. The MBP interaction network has common features with the formation of amyloid fibrils [7]. This process occurs through phenylalanine-mediated hydrophobic and amyloid-like interactions, which provide the molecular basis for protein extrusion and “fastening” of myelin membranes. Data from Aggarwal et al. reveal the physico-chemical mechanism of how the cytosolic protein controls the morphology of complex membrane architecture [7]. Their results provide an explanation for the key mechanism of myelin membrane biogenesis with the possibility of using these data to suppress demyelinating diseases of the central nervous system.
MBP has many isoforms resulting from both alternative splicing and miscellaneous post-translational modifications [8]. It is present in the nervous system as isomers with different charge, and it is evident that charge-mediated effects modulate its function and interactions with ligands such as membrane surfaces [9][10][11][12]. Recently it was shown that MBP may be hydrolyzed by proteasome without ubiquitination [13] through novel class of Basic Elementary Autonomous Degrons (BEADs) interacting with PA28-capped proteasomes [14]. MBP is one of the major myelin sheath autoantigens in multiple sclerosis (MS) and animal models of autoimmune neurological disorders [15][16]. It is recognized [17] and cleaved [18][19] by autoantibodies and is efficient substrate for the immunoproteasome [20]. Post-translational modifications of MBP may play an important role in the pathogenesis of MS [21][22]. Removal of arginine occurs at several sites and has been increased in multiple sclerosis [21], and the degree of removal (or citrullination) of MBP correlates with the severity of multiple sclerosis [23]. In the study by Wang et al., recombinant murine analogs of two isoforms of the classic 18.5 kDa MBP, natural C1 and C8 charge isoforms (rmC1 and rmC2, respectively), were used as model proteins to elucidate the structure and function of charge isomers [24]. A number of biochemical and biophysical methods have been used to study the differences between the two isoforms in terms of structure and interaction with ligands, including calmodulin (CaM), various detergents, nucleotide analogs and lipids. In general, the results indicate that rmC8 in comparison with rmC1 is insufficient both in its structure and especially in function. Although the binding properties of CaM are very similar between the two forms, their interactions with membrane mimics were different. In addition, using fluorescently labeled nucleotides, MBP was observed to bind to ATP and GTP, but not AMP; and this binding of nucleoside triphosphates was inhibited in the presence of CaM [24]. Recently it was shown that CaM may protect MBP from ubiquitin-independent proteasomal hydrolysis [25], which contributes to the development of autoimmune neurodegeneration [26].

To elucidate potential binding partners of MBP, we performed formaldehyde crosslinking, immunoprecipitation and mass spectrometry analysis of cell lysates of HEK293T cells overexpressing Flag-tagged human MBP (Figure 1). There are several reasons why we used HEK293T cells overexpressing Flag-tagged MBP: (i) There are only a few immortalized cell lines mimicking oligodendrocytes. Despite expression of surface markers similar to those of oligodendrocytes, they still do not fully represent native cells. (ii) Usage of primary oligodendroglial cultures is not obvious due to the heterogenicity and troubles with either transfection or transduction procedures. Finally, amount of endogenous MBP in native oligodendrocytes is dramatically high therefore it may effectively compete with recombinant tagged MBP, displacing it from protein complexes. (iii) Commercially available antibodies partially cross-react with eukaryotic proteome thus generating false-positive results. Additionally, usage of such low-affinity antibodies requires mild washing conditions in contrast to highly specific and affine anti-FLAG antibodies.

Figure 1. Experiment pipeline. HEK293T cells overexpressing Flag-tagged human MBP were detached, washed, and exposed to formaldehyde. The formaldehyde treated cells were washed and lysed in the mild conditions on ice. Protein complexes containing MBP were immunoprecipitated from the lysates using anti-Flag-agarose. The immunoprecipitated material was resolved by gradient SDS-PAGE. The cross-linked immunoprecipitated complexes were detected by Coomassie Blue staining. The 1 mm wide strips from the middle of each lane were cut and subjected to the in-gel-trypsinolysis procedure and mass spectrometry-based proteomics analysis. A total of three experiments were carried out with triplicate repeats in each.
MBP is characterized by multiple low-affinity semi-specific interactions and therefore combination of fixation of MBP-containing complexes by cross-linking and subsequent highly sensitive LC-MS/MS seems to be the most beneficial methodology. Despite the broad usage of formaldehyde as a crosslinking agent, studying of each particular protein requires optimization of experimental protocol due to the different protein environment, for example in case of cytosolic and membrane proteins [27]. In order to find the optimal conditions of the complex formation and low false-positive rate upon the use of formaldehyde as cross-linking reagent, we varied 2 out of 3 major parameters playing key role in formaldehyde cross-linking: the incubation time and the formaldehyde concentration. We excluded the temperature dependency from the analysis since the minimal effect of room temperature on the crosslinking efficiency was previously shown [28], and the use of other temperature ranges would introduce additional variability due to the difficulty of accurately following the crosslinking protocol. We analyzed the cross-linking efficiency in the range of formaldehyde concentrations from 0.4 to 1% and incubation time from 2 to 10 min and found that the optimal combination of parameters was 0.6% formaldehyde and 10 min of incubation time (data not shown). Upon these parameters, the size of the pool of formed complexes was in the range approximately from 50 to beyond 116 kDa (Figure 2A). It should be noted that under our conditions, the different incubation time in the range of 4–10 min did not result in significant changes in cross-linking. Thus, we chose the interval of 10 min, since it allowed us to minimize timing errors.

Figure 2. MBP immunoprecipitation and LS-MS/MS data. (A) Crosslinked MBP immunocomplexes resolved in gradient TGX Stain-Free Precast Gel (left) and immunostained with anti-Flag Ab (right). Analyzed zone is marked. (B) Venn diagram representing proteins identified in three experiments (with triplicate repeats in each) of immunoprecipitation against Flag-tagged human MBP. (C) Venn diagram representing unique and reproducible proteins identified in immunoprecipitation against Flag-tagged human MBP compared to negative control.
A total of three separate cross-linking-IP experiments were carried out with triplicate repeats in each to identify a pull of potential MBP interactors. As a negative control for the IP we used the same lysates and IP procedures, except protein A/G agarose beads (Thermo Fisher Scientific, Waltham, MA, USA) in the control IPs instead of anti-Flag agarose used in the MBP IPs. Final protocol used in the present study reads as follows. HEK293T cells overexpressing Flag-tagged human MBP were exposed to 0.6% formaldehyde for 10 min at room temperature (approximate 23 °C). The formaldehyde-treated cells were washed and lysed in the mild conditions on ice. To remove the lipids and DNA from obtained complexes the lysates were subjected to ultrasound and DNAse treatment. Protein complexes containing MBP were immunoprecipitated from the lysates and the immunoprecipitated complexes was resolved by gradient SDS-PAGE. The protein bands were stained by Coomassie Blue. The gel strips were exized and subjected to mass spectrometry-based proteomics analysis. Cross-linked complexes in a gradient gel gave an about even coloration in the 50-beyond 116 kDa range with several predominant bands (Figure 2A). Therefore, for MS analysis we excised a strip 1 mm wide from the middle of each lane starting from about 30 kDa and up to the top end of the separating gel. The strips were cut in 1 × 1 mm pieces and subjected to the in-gel-trypsinolysis procedure and subsequent MS analysis. Venn diagram in Figure 2B represents the distribution of the detected proteins between different experiments. The proteins, which were observed in at least two from three MBP IP experiments, and which were either not detected in three control experiments or whose Peptide-Spectrum Matches in MBP experiments were 3.5 or more times over those in control experiments, were considered as possible components of MBP-interacting network.
The detected MBP interactome included 67 different proteins that were identified by Mascot and/or X! Tandem with false discovery rate (FDR) for peptide-spectrum matches less than 0.01 determined by searching a reverse database (Figure 2C).
The analysis of identified proteins using String database showed that MBP interacts with eight major proteomic groups presented in Table 1 and Figure 3. 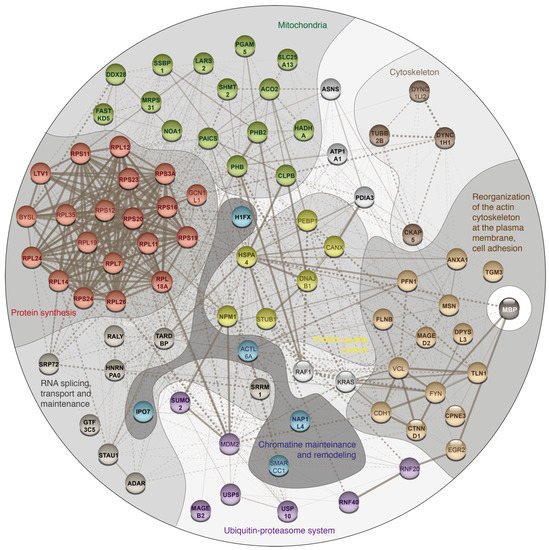