Submitted Successfully!
Thank you for your contribution! You can also upload a video entry related to this topic through the link below:
https://encyclopedia.pub/user/video_add?id=15926
Check Note
2000/2000
Chenopodium quinoa Willd. (Quinoa)
Edit
Upload a video
This entry is adapted from 10.3390/plants10112417

Quinoa (Chenopodium quinoa Willd.) is a pseudocereal belonging to the Amaranthaceae family that is native to the Andean region in South America. Peru is the leading quinoa-exporting country, exporting quinoa with a value of $98.5 million dollars, followed by Bolivia, the Netherlands, the United States, Spain, Germany, Canada, France, Ecuador, and Belgium.

Quinoa seeds are known to have a high protein content ranging from 11% to 19%. The seeds are a source of amino acids (isoleucine, leucine, lysine, methionine, phenylalanine, threonine, tryptophan, valine, histidine, cysteine, tyrosine, glycine, arginine, proline, serine, glutamine, alanine, and aspartic acid), carbohydrates (49% to 68% dry weight), fat (2% to 9.5%), vitamins (thiamine, riboflavin, folic acid, and niacin), and minerals such as iron, zinc, magnesium, and copper (2.4% to 4.8%) [1]. Additionally, some phytochemical constituents such as saponins, phenolic compounds (ferulic, sinapinic and gallic acids, kaempferol, isorhamnetin, and rutin) [2], and peptides with therapeutic activity have been determined, making this crop very attractive for a wide range of food products [3]. Quinoa has been traditionally used in tortillas, pasta, flour, cookies, bread, and soups, among others, and is considered to be a gluten-free superfood and a source of fiber dietary [4]. Thus, quinoa is considered to be an acceptable food worldwide and is highly recommended for vegetarians.
On the other hand, sprouts are obtained by germinating the seeds and provide multiple nutritional and therapeutic benefits to those who consume them in different ways, due to the increase in the availability of nutrients such as fatty acids and carbohydrates, as well as polyphenols and flavonoids, during the germination process, which improves their antioxidant capacity [5]. These changes are due to a multitude of biochemical processes, which generate alterations in the composition of primary and secondary metabolites, producing an intrinsic change in the phenolic compounds and antioxidant activity [6]. Sprouts can improve the nutritional quality of a grain by eliminating or inactivating some antinutritional factors and increasing the digestibility of proteins and starches [7]. During germination, the original composition of the seed changes: the nitrogen-containing proteins move towards smaller protein fractions, oligopeptides, and free amino acids (some increase; others decrease or are not altered). Consequently, the changes increase the biological protein value of the sprouts, and digestibility is higher than in seeds [8].
Studies have reported that quinoa sprouts have high levels of amino acids, peptides, vitamins, and minerals but also include antinutritional components such as tannin, lectin, trypsin inhibitor, and galactoside, although at lower values than in non-germinated seeds [9]. The main enzyme involved in the early phase during the sprouting of quinoa seeds seems to be α-amylase, which leads to the generation of new compounds [10]. Some biological studies in quinoa sprouts have reported hepatoprotective, antioxidant [11], and anti-α-amylase effects in vitro [12], and hypoglycemic effects in diabetic rats [13]. 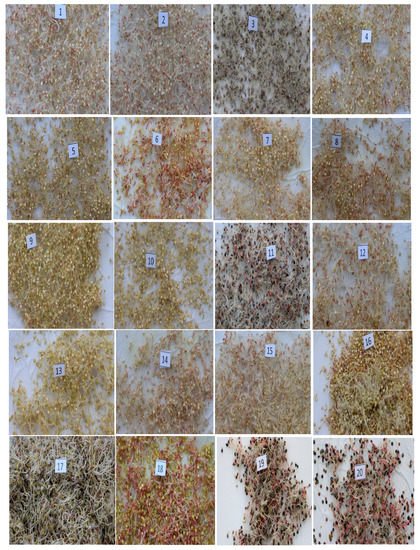 Polyphenolic compounds are secondary metabolites present in plants, which are divided into flavonoids and non-flavonoids, the first being responsible for the antioxidant capacity, exerting this through various mechanisms such as transition metal chelators, free radical scavengers, and enzyme inhibitors [14]. The antioxidant properties of secondary metabolites are related to vasodilatory, lipid-lowering, antiaging, and anti-inflammatory, modulating apoptosis processes in the vascular endothelium, but these molecules could also be influenced by factors such as the number and position of the phenolic hydroxyl groups, steric effects, and molecular properties [15]. In current results, the content of total phenols and flavonoids found in quinoa sprouts presented differences in each variety analyzed, being influenced by the type of seed, the cultivation site, maturity, storage, and germination conditions, as the flavonoids play an important role in pigmentation [16]. It is known that the phenolic compounds present in plants are formed during their development and under stress conditions; these include simple phenols, phenolic acids, coumarins, flavonoids, stilbenes, hydrolysable and condensed tannins, lignans, and lignins [17]. Additionally, these polyphenols could be altered during the germination process, increasing their content and the antioxidant capacity [18].
In current study, the variation in TPC and TF differed from the studies of Valencia et al., in which the TPC varied from 0.783 to 3437 mg GAE/g in quinoa seeds [19], and that of Carciochi et al. [20], with values of TPC of 39.3 ± 0.9 mg GAE/100 g and TF of 11.06 mg of quercetin/100 g in sprouts. These were higher in current study due to the type of solvent used in the maceration process. In the same way, when the antioxidant activity of the content of polyphenols and flavonoids was evaluated in the red and yellow varieties of quinoa, there was a significant increase after 9 days of germination. In a similar study, the antioxidant capacity in germinated seeds was greater compared with seeds of C. quinoa, increasing up to twofold, similar to the increase in phenolic compounds and antioxidant capacity observed after 72 h of germination [11]. In current study, a wide range of values were observed for phenolic compounds and flavonoids, as well as for the antioxidant activity in each variety of quinoa studied, which can be explained by the characteristics of each seed, variation in the availability of nutrients, and activation of the antioxidant machinery during germination.
Several studies have shown nutritional improvements in quinoa sprouts, such as in crude quinoa flour (CQF) and germinated quinoa flour (GQF), where the CQF/GQF ratio increased the nutritional quality of pasta. Chemical analysis indicated an increase in the proportion of proteins by 37% and a decrease in phytic acid by 77%, which means that the germination process is an effective method to minimize phytic acid content in seeds. Pasta with a high CQF/GQF ratio had an increased content of Ca, K, Fe, Mn, Mg, P, and Zn, and thus using GQF is recommended in the production of bread, cakes, and cookies to take advantage of their nutritional properties, which provide a high content of proteins, minerals, TPC, and amino acids, and a low amount of phytic acid [21]. During germination, quinoa seeds undergo relevant physical and chemical changes; the maximum intensity of macromolecular modification occurs at 48 h. The germinated material contains micronutrients with improved bioavailability. This has a great impact on quinoa, as it improves the technological properties of quinoa, as well as some of its nutritional characteristics, enhancing the use of quinoa sprout flour as an ingredient in food formulation [10]. The germination process of quinoa seeds is an effective technique to enhance the content of total phenols and total flavonoids and to improve the antioxidant capacity, as was demonstrated in quinoa (C. quinoa) and kiwicha (Amaranthus caudatus) [22], where the sprouts had enhanced content of coumaric acid and kaempferol tri-glycoside in quinoa and caffeoylquinic acid in kiwicha. Additionally, a significant increase was observed in the phenolic content and the antioxidant capacity through malting quinoa sprouts [23] and Amaranthus caudatus sprouts [24].