Submitted Successfully!
Thank you for your contribution! You can also upload a video entry related to this topic through the link below:
https://encyclopedia.pub/user/video_add?id=15921
Check Note
2000/2000
NcRNAs with Regulatory Functions
Edit
This entry is adapted from 10.3390/ijms222111397

Noncoding RNAs (ncRNAs) play prominent roles in the regulation of gene expression via their interactions with other biological molecules such as proteins and nucleic acids.

Noncoding RNA (ncRNA) genes are those genes that produce transcripts or functional RNAs that, unlike messenger RNAs, are not translated into proteins. Only a few years ago these transcripts were considered “dark matter” in the genome, but now they play leading roles in the regulation of biological processes [1][2].
In terms of their functions, ncRNAs are mainly classified (Figure 1) into housekeeping and regulatory noncoding RNAs [3][4][5][6][7][8]. 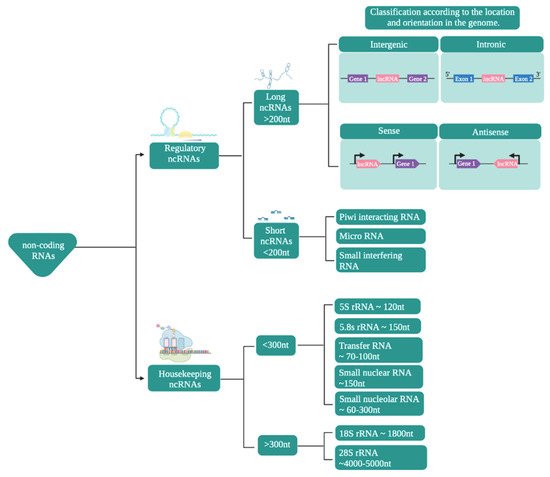 Figure 1. Classification of noncoding RNAs. The scheme presents the classification of noncoding RNAs according to their function, size, and location/orientation in the genome.
Regulatory ncRNAs (Figure 1) are classified according to their size. ncRNAs of less than 200 nucleotides are known as small ncRNAs, while those larger than that are known as long noncoding RNAs (lncRNAs) [9][10][11][12].
The small ncRNAs include microRNAs (miRNAs), small interfering RNAs (siRNAs), and Piwi-interacting RNAs (piRNAs), among which miRNAs have become particularly prominent in research as they play important roles in the regulation of numerous cellular processes, making them potential treatment targets or biomarkers [13][14][15]. Mature miRNAs are between 19 and 23 nucleotides long and are transcribed by RNA polymerase II [8][16]. siRNAs, with a size of between 18 and 30 nucleotides, are the most diverse members of this group and can be of endogenous or exogenous origin. They can also regulate expression at the transcriptional and post-transcriptional levels [17][18].
lncRNAs are defined as transcripts that are at least 200 nucleotides in length [19][20]. They share some characteristics with mRNAs, such as both having exons and introns (although lncRNAs have fewer than mRNAs), most being generated by RNA Pol II, as well as a large proportion of them have a polyadenylated tail at their 3′ end and a methylated cap at their 5′ end [21][22]. These are located in intergenic regions or between exons [2][23] and have the ability to fold in on themselves and adopt various secondary and tertiary structures that maintain similar functions in evolutionarily distant species [24]. Regarding the expression levels of lncRNAs, they are very low, with variable expression patterns depending on the tissue, stage of development, or physiological or pathological state [25][26].

2. Regulation of the Gene Expression of ncRNAs through Their Interactions with Other Biological Molecules

Many different mechanisms that regulate gene expression (Figure 2), such as transcription factors accessing DNA, and variations in the rates of mRNA synthesis, processing, stability, and translation, are influenced by ncRNAs [21][27]. This is achieved by ncRNAs’ ability to interact with various biological molecules (Figure 3) within different cells and tissues. Among these ncRNAs with regulatory functions, this review particularly focuses on miRNAs and lncRNAs, which have attracted great interest given their roles in various biological functions [13][28][29][30]. 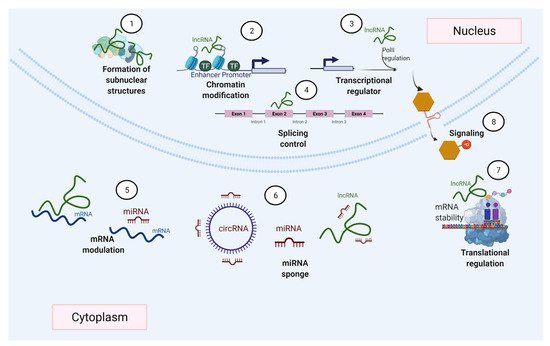 Figure 2. ncRNAs can regulate gene expression by diverse mechanisms. ncRNAs participate in the formation of nuclear bodies (1), gene transcription (2–3), modulate splicing events (4), regulate mRNA by degradation or stabilization (5), act as miRNA sponges (6), and ncRNAs can also be involved in the control of transcription (7) and cell signaling (8). 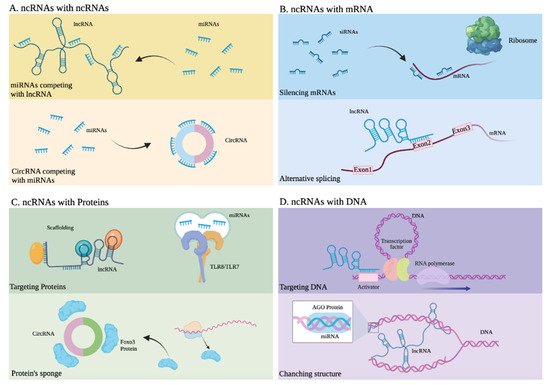 Figure 3. Interactions between noncoding RNAs and other molecules. (A) ncRNAs with other ncRNAs. Upper: miRNAs competing with lncRNA. Lower: CircRNA competing with miRNAs. (B) ncRNAs with mRNA. Upper: siRNAs silencing mRNA. Lower: Alternative splicing of mRNA due to an lncRNA. (C) ncRNAs with proteins. Upper: An lncRNA developing scaffold function and miRNAs activating Toll-like receptors. Lower: A circRNA serving as a sponge or Foxo3 protein. (D) ncRNAs with DNA. Upper: An lncRNA targeting the activator of a gene. Lower: An lncRNA altering the structure of DNA.
miRNAs are generated in the nucleus as pre-miRNAs and processed and exported to the cytoplasm by exportin 5, where they can regulate gene expression mainly at the post-transcriptional level (Figure 3A,C) by binding with other RNAs for regulatory purposes [31][32][33]. Through this mechanism, miRNAs can decrease the expression of certain proteins, through sequence complementarity with their corresponding messenger RNA or through interaction with regulatory lncRNAs. This type of regulation, mainly associated with translational repression, is the mechanism reported in most studies [34][35], along with the regulation of mRNAs through their interaction with lncRNAs. A well-documented example of a regulatory mechanism mediated by miRNAs, which function as modulator of transcripts of coding genes or their regulatory lncRNAs, involves PTEN, a tumor-suppressor gene under complex regulatory control by ncRNA [36][37]. The presence of mature miRNAs within the nucleus has also been reported; these miRNAs activate or silence genes through various mechanisms and, as a result of their direct interaction with DNA or through protein scaffolds (Figure 3D), mechanisms that include epigenetic pathways [38][39][40].
lncRNAs are characterized by their wide functional versatility because they promote the regulation of gene expression either in the nucleus or in the cytoplasm and at different levels transcriptionally and post-transcriptionally, thanks to their ability to interact with other nucleic acids such as DNA and RNA, as well as proteins (Figure 3) [41][42]. In the nucleus, they regulate gene expression in various ways. These include epigenetic modifications by directly binding to DNA and the recruitment of chromatin modifiers. This can lead to a change in the accessibility of genes to DNA-binding proteins, such as transcription factors and even RNA Pol II (Figure 3D), resulting in the activation or suppression of transcription [43][44][45][46]. Another of the most widely studied regulatory mechanisms of lncRNAs involves them acting like enhancers, in which they function either by directly interacting with promoter regions of the genes they regulate or by binding to proteins that participate as mediators [47][48][49][50][51]. These lncRNAs, through their interactions with proteins, recruit such proteins to participate in DNA repair [52]. In the nucleus, these lncRNAs can interact with mRNAs to stabilize them or to direct splicing (Figure 3B) towards a specific mRNA isoform [53][54][55]. Meanwhile, in the cytoplasm, lncRNAs display equally versatile functions. They interact with other ncRNAs such as miRNAs, or with mRNAs or proteins, through mechanisms that can result in the suppression or promotion of the products of the genes that they regulate. For example, some lncRNAs and circular RNAs regulate the activity of miRNAs because they have binding sites that retain them, thus modulating the activity of miRNAs. LncRNAs, which present this mechanism, are considered miRNA sponges, and they are part of a complex interaction network in the transcriptome or also called the theory of competitive endogenous RNAs. Then, miRNA sponges are considered exogenous when they are artificially introduced into a biological system or endogenous when they are expressed naturally [56][57][58]. In addition, ncRNAs, through various interactions with other biological molecules, can be key participants in signaling pathways [59][60][61][62][63][64].

3. The Importance of Prediction Models That Can Later Be Tested Experimentally

Recently developed laboratory-based techniques have generated major advances in the study of the interactions of RNAs with other biomolecules. These include RAP-RNA, RIA-Seq, hiCLIP, CLASH, PARIS, SPLASH, and LIGR-seq. However, the availability of these approaches is limited, and they are expensive, which impedes study of the ncRNA interactome [65][66].
By taking advantage of the information that is generated experimentally using bioinformatics and mathematical algorithms, and storing it in databases and applying open-source tools, it is possible to predict interactions between molecules such as DNA, RNA, and proteins, which can save operating costs and time (Figure 4) [67][68]. 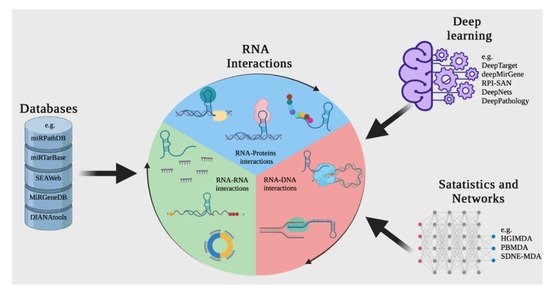 Figure 4. A computational approach for discovering or predicting RNA interactions among different biomolecules. The first strategy is to search in web tools or RNA databases such as miRTarBase. Another way to discover RNA interactions is to use resources based on deep learning and other machine learning-based tools, such as DeepTarget and deepMirGene. Finally, different mathematical and network theory methods can be used to research RNA interactions.
The advantage of using ncRNA databases and bioinformatic tools is that, thanks to the fact that they are continually fed new information obtained experimentally and supported by an exhaustive data curation process, they can support the design of experimental trials for targeting and discovering new interactions [69][70].
The various species of RNAs and their products interact in complex ways, the understanding of which provides deeper insights into the functioning of living organisms including humans. This article is intended to boost our understanding of health and disease through clarifying the intricate networks of interactions between heterogeneous biological molecules. Towards this goal, we review the latest advances in databases, bioinformatic tools, and new strategies in silico that allow the establishment or prediction of biological interactions between ncRNAs, particularly miRNAs and lncRNAs. However, these tools also have contained biomolecule-related information in another species.