Submitted Successfully!
Thank you for your contribution! You can also upload a video entry related to this topic through the link below:
https://encyclopedia.pub/user/video_add?id=15920
Check Note
2000/2000
Light-based Treatments
Edit
Upload a video
This entry is adapted from 10.3390/antiox10081310

Thanks to the progress of modern research, previously defined medical conditions seem to be more and more well described at a molecular level. One of the missing links of this complex intertwining of external and internal processes is epigenetics, literally “above genetics”, meaning those processes that link genes and their transcriptional products at a very fine level. One of the latest findings in this regard is the topic of this review, microRNAs (miRNAs), small non-encoding RNAs with a sequence capable of binding to mRNA strings. The genes encoding miRNAs, usually scattered sparsely around the genome, or included in introns and untranslated regions (UTRs) of protein genes, are a class of molecules very well integrated in the cellular processes involving multicellular organisms. The first studies regarding miRNAs and human pathology were directed in the oncology field.

Here, research led to an interesting discovery: miRNAs can be tissue-specific and lose that specificity the more the tumor is undifferentiated [1]. Later, other studies extended the field of research regarding the miRNome to other diseases. The skin, one of the main topics of this review, has been thoroughly studied in this sense. The involvement of microRNAs is well established as a mechanism associated with oxidative stress-induced damage, both as a repair mechanism and a proinflammatory one [2], and oxidative stress, particularly in chronic skin diseases treated with light-based therapy, plays a major role in disease activity and therapy response [3][4][5]. The other significant topic of this paper is light-based therapy. More and more different light sources have been used, especially in dermatology, to cure diseases based on the properties of specific wavelengths.

The two main therapies phototherapy (PT) and photodynamic therapy (PDT) use light sources to bring some therapeutic effects into action. Starting with phototherapy, it uses short wavelengths, in the ultraviolet B spectrum (UVB, usually 311 nm), to produce sub-cellular effects such as the maturation and migration of cells, and the lengthening of the turnover process, such as in keratinocytes. When paired with psoralens, the light source produces ultraviolet A rays, in a procedure called PUVA. It has been used effectively in those skin disorders where the immune system or the keratinocytes do not undergo the usual physiological processes (i.e., psoriasis, parapsoriasis, atopic dermatitis). On the other hand, photodynamic therapy acts as an immune booster and inflammatory stimulus. The main protagonists of this process are unstable substances called photosensitizers. The photosensitizers thus far produced have been subdivided by generation time, spanning from the first dyes such as phthalocyanine through the second generation including the omnipresent aminolevulinic acid to the latest third generation which combines heme-like substances with lipid receptors or monoclonal antibodies to carry the photosensitizer on the desired target [6]. Once the light-sensitive substance reaches its goal, a light source in the infrared spectrum (about 630 nm in wavelength in most cases) indirectly produces the formation of reactive oxygen species (ROS), allowing the killing of the infected/rogue cells and the stimulation of a controlled and self-limiting inflammatory process. The latter therapy has been developed, mostly, for those diseases where cell replication is higher and the self-healing mechanisms of the diseased cells are lacking, such as infective diseases and cancers.

Both these topics of interest have proven to be useful tools on several occasions for a better understanding of the base mechanisms that regulate the human organism and have shown to be promising therapies for the present and the future, but many links are still missing and leave us with questions. In fact, light-based therapy seems to be affecting cells not just with the brute force of damaging or ablating tissues but also by having a crucial role on a genetic and epigenetic scale, since both these aspects of the human and non-human physiology have proven to be dynamic rather than a still picture.

2. Involvement of microRNAs as a Response to Phototherapy and Photodynamic Therapy

The aim was to organize the current knowledge about light-based therapy and the correlation with miRNA expression in different skin conditions, ranging from infectious diseases and immune-mediated dermatoses up to tumoral and pre-tumoral conditions. Out of five studies dealing with miR-21, four either tried to suppress its effects and levels after the treatment or used it as a marker of disease activity, whilst only one assessed it as an enhancer of therapeutic effects. miR-21 was observed in several studies (here reviewed) as an anti-apoptotic factor and was related to a thicker Breslow level in the case of melanoma and to a poorer prognosis in the case of squamous cell carcinoma [7]. The role of mir-21 in the development of cancer is so well established that it was studied in different diseases such as lung cancer: in this case, the upregulation of miR-21 represented a pro-tumorigenic factor, inducing the RAF/MEK/ERK pathway, dedicated to the regulation of the cell cycle, and increasing the production of IL-8 [8]. miR-21 has been observed to drop its levels after adequate UVB therapy in the case of psoriasis [9]. It is interesting to note that studies regarding basal cell carcinoma (BCC) and miR-21 levels are still lacking and can prove an interesting field of research since miR-21 belongs to the survival cell process linked to p53, a well-known protein involved in the development of BCC [10]. In this regard, UVB therapy, and UV rays in general, may explain both the pathogenetic process of such tumor and also its low-grade invasiveness.
Regarding PDT, this light-based treatment seems to block the effects and expression of miR-21, with pro-apoptotic results, thus suggesting its possible role as a routine adjuvant treatment even in cases of locally advanced tumors such as melanoma and SCC. The only study showing a possible use of miR-21 combined with PDT might also suggest a possible treatment for these skin conditions and tumors rather than just a diagnostic tool or a target therapy, for example, using antagomirs as anti-tumoral agents [8] as in melanoma. After surgery, chemotherapy and strict follow-up exams, both photodynamic therapy and sonodynamic therapy seem to be an interesting alternative, according to some studies [11]. Similar to this, a very recent study suggested a possible role of miR-21 as a marker of bodily response in vitiligo [10], hence proposing a new possible explanation of how phototherapy could lead to repigmentation of white areas via the upregulation of this particular miRNA. Still though, as of today, these protocols have not been validated yet and are far from being accepted as routine treatments.
Three studies researched the levels and role of miR-155 at the skin level. miR-155, out of all the miRNAs, seems to be one of the most consistently related to melanoma and lymphomas [12], and other skin-related processes such as fibrosis [13]. One of these three studies calculated the levels of miR-155 after a combined therapy with UVB irradiation and methotrexate administration. miR-155 acts at the level of keratinocytes, if expressed more than the normal levels, as a survival factor. Additionally, miR-155 seems to be involved in the polarization of T cells, either to a Th1 or a Th17 profile [14]. In another study, it was shown that miR-155 is overly expressed in the case of breast cancer and is subsequently reduced when the tumor size is decreased after treatment [15]. Its possible role as a marker of disease activity, potentially more sensitive than conventional tumoral markers such as carcinoembryonic antigen (CEA) and cancer antigen 125 (CA-125) along with miR-21 [15], has been suggested. One final study by Cao et al. used miR-155 as a target for the deliverance of nanoparticles loaded with anti-tumoral drugs to best deliver target therapies: this suggests to us that, in fact, miRNAs can be used not just as a diagnostic or therapeutic tool alone but also as eligible targets for theranostic procedures [16].
miR-145 seems to be another possible target for therapeutic and imaging purposes. In one study, after PDT treatment of oral cancer, the levels of miR-145 dropped significantly. In the same study, cells presenting with low levels of miR-145, after being transfected with miR-145 mimics, showed a better result after the treatment via the increase in apoptotic processes and inhibition of progression through the pathway of runt-related transcription factor 3 (RUNX3), an oncogene involved in head and neck cancers [17]. These results, however, were not achieved in another study: in this last case, although increased levels of miR-145 were linked to better treatment results, such levels did not decrease after treatment but rather increased [18]. Similar results were achieved in another study, where nanoparticles containing melanin were used to deliver the drug in situ [19]. These three studies, when compared, suggest to us that miR-145 is an miRNA that still requires further experimentation, or, at the very least, that the usage of either aminolevulinic acid or pheophorbide could provide considerably different results in the expression of this miRNA.
Another miRNA that seems of importance in the case of cutaneous cancers is miR-125. This miRNA targets signal transducer and activator of transcription 3 (STAT3), a gene well known for its implication in tumorigenesis via migration and invasion of malignant cells. In the case of skin cancers, particularly squamous cell carcinoma, higher levels of this miRNA seem to act as a protective factor by downregulating STAT3 [20]. In this review, the only study found linking this miRNA to some light-involving therapeutic tool regarded breast cancer [15], but it can be suggested to extend this treatment to other skin tumors where the pathway of STAT3 could be of pathogenetic significance. One more study [9] researched the role of narrowband UVB therapy and its effects on the expression of miR-125, showing an increase in its levels and, as a molecule targeting p53, a gain of function for this crucial protein in psoriatic lesions. Given the role of p53 as a “genome guardian”, its role in another important epithelial tumor such as basal cell carcinoma can be evaluated [21].
The conclusions provided here are summarized in Figure 1. 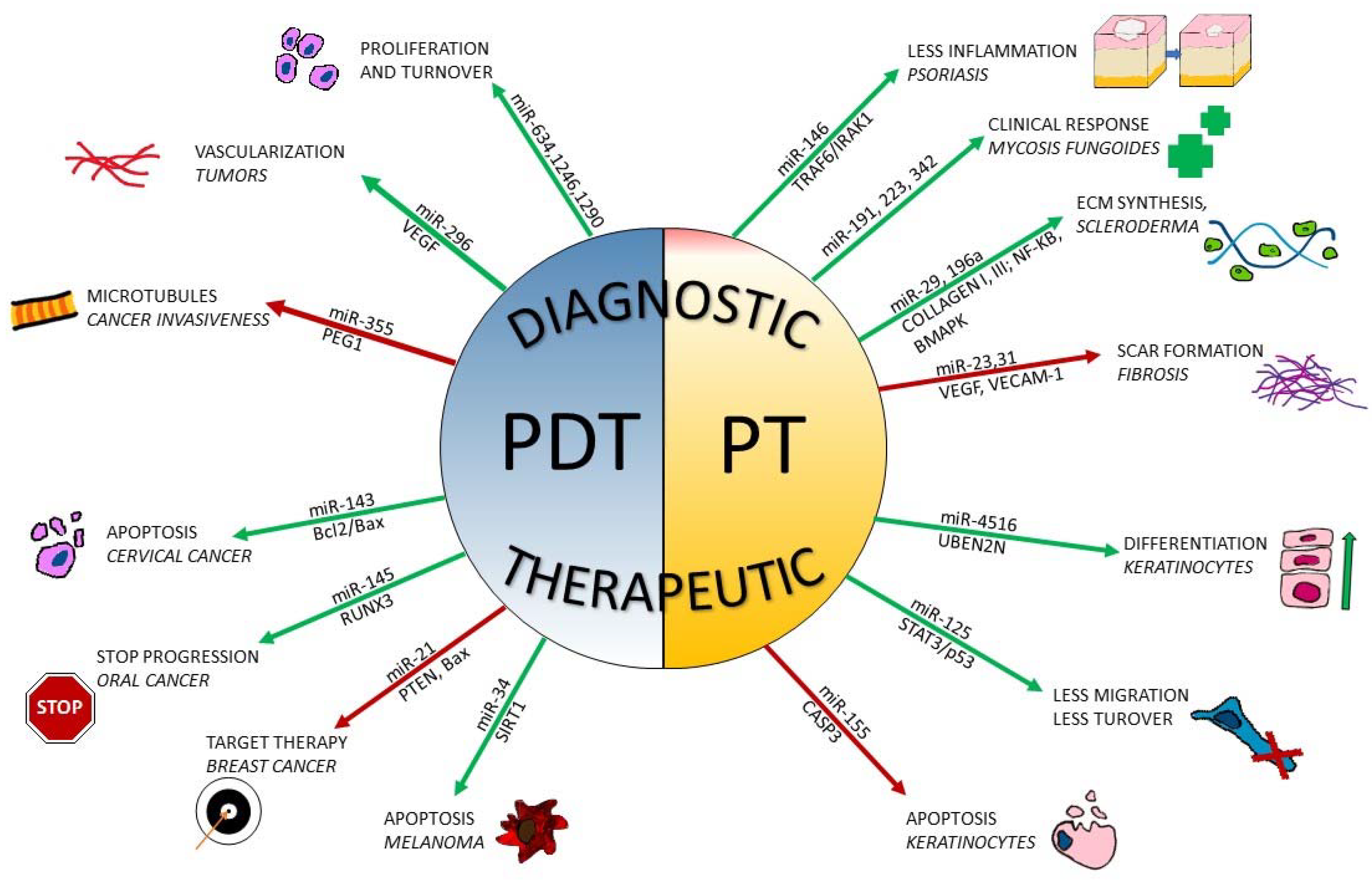 Figure 1. Effects of photodynamic therapy/phototherapy on miRNA expression in skin conditions. Green arrows represent upregulation of circulating/local levels of miRNAs; red arrows represent downregulated levels of miRNAs. On the upper part of the figure, miRNAs are exploited as a diagnostic tool; on the lower part, miRNAs provide therapeutic targets or produce healing effects when down- or upregulated.

Since their first applications, light-based therapies have helped several skin conditions, both related and unrelated to malignancy. Being both secure and scarcely invasive, these treatments have proven to have generally scarce side effects, but the current knowledge on their mechanism of action is lacking. To better understand the molecular pathways involved in the healing process, miRNAs have proven to be a helpful tool both as a diagnostic marker and as a possible target therapy. Either by targeting miRNAs or using mimics/inhibitors, the effects of light-based therapy can be enhanced or predict treatment efficacy. Current studies are not enough to focus on just one treatment, but the premiere results are promising. According to the results provided here, certain miRNAs appear to be more frequently associated than others in chronic skin conditions, being either up- or downregulated, and it can be suggested that further clinical trials might focus on targeting or exploiting these molecules.

More
© Text is available under the terms and conditions of the Creative Commons Attribution (CC BY) license (http://creativecommons.org/licenses/by/4.0/)
Upload a video for this entry
Information
Subjects: Dermatology
Contributor MDPI registered users' name will be linked to their SciProfiles pages. To register with us, please refer to https://encyclopedia.pub/register :
Francesco Borgia
View Times: 54
Revision: 1 times (View History)
Update Time: 11 Nov 2021
Table of Contents
1000/1000
Hot Most Recent