Submitted Successfully!
Thank you for your contribution! You can also upload a video entry related to this topic through the link below:
https://encyclopedia.pub/user/video_add?id=15908
Check Note
2000/2000
Indole Derivatives as Anti-Lung Cancer Agents
Edit
This entry is adapted from 10.3390/molecules25071615

Indole scaffold is considered one of the most privileged scaffolds in heterocyclic chemistry. Indole may serve as an effective probe for the development of new drug candidates against challenging diseases, including lung cancer.

Lung cancer remains the deadliest disease on record, with approximately 2.09 million new cases reported each year. According to the World Health Organization, it is responsible for 1.7 million cancer deaths worldwide per year [1]. There are two major types of lung cancer: small cell lung cancer (SCLC) and non-small cell lung cancer (NSCLC). Among these two types of lung cancers, NSCLC is responsible for approximately 80%–90% of cancerous tumors [2][3]. NSCLC is further divided into three major histological subtypes: squamous-cell carcinoma, adenocarcinoma, and large-cell carcinoma. SCLC and squamous-cell carcinoma are strongly linked to smoking, while adenocarcinoma is the most common type of lung cancer in patients who have never smoked [4].
Treatment of lung cancer is commonly addressed by surgical removal of the affected area and by chemotherapy, which applies a combination of one or more drugs in conjunction with radiation therapy. However, multidrug resistance and the severe side effects associated with chemotherapy persists as one of the major challenges in the treatment of lung cancer.

1.1. Indole and its Pharmacological Significance

Indole is a pervasive and naturally occurring heterocyclic compound, the structure of which comprises of a six-membered benzene ring tethered to a five-membered pyrrole ring [5] (Figure 1). With its 10 π-electrons, indole follows Huckel’s rule of aromaticity. It is more prone to electrophilic substitution reactions similar to the benzene ring. Molecular orbital studies showed that the 3-position of indole is more reactive towards the electrophilic substitution reactions. Indoles can undergo N-substitution reactions under basic conditions owing to the slightly acidic nature of the—NH bond in indole [6]. The first synthesis of indole was accomplished in 1866 by Adolf von Baeyer [7]. Due to the diverse applications of the indole scaffold in both the biological and pharmacological fields, hundreds of synthetic schemes were published. The most prominent and widely used ones are those reported by Fisher [8], Bischler [9], Hemetsberger [10], Nenitzescu [11], Bartoli [12], and others [13][14]. 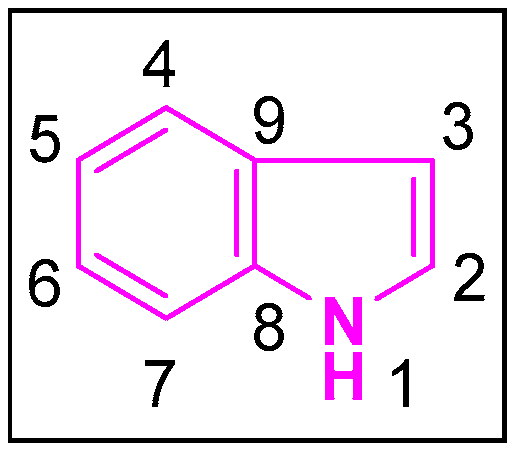 Figure 1. Structure of indole.
Owing to its bioavailability and pharmacological applications, indole is considered the most privileged scaffold in heterocyclic chemistry with such widespread applications as antiviral, antimicrobial, anti-inflammatory, anti-cancer, anti-hypertensive, anti-diabetic, and antioxidant [15][16][17].

Naturally occurring indole derivatives, such as glucobrassicin and indole-3-carbinol, are commonly found in cruciferous vegetables like cabbage, broccoli, and sprouts [18]. Indole-3-carbinol and its dimeric product 3,3′-diindolylmethane have been found to induce apoptosis in cancer cells [18]. This is a property that has increasingly commanded the attention of researchers from around the world. To get the greatest benefits, indole rich sources belonging to the Brassica family are particularly recommended by the National Cancer Institute to reduce the risk of cancer [18].
Tryptophan containing indole is an essential amino acid found in many natural resources. It is also a biosynthetic precursor for the tryptamine, 5-hydroxy-tryptophan, an immediate precursor of serotonin (Figure 2).

Figure 2. Indole scaffold in biologically important compounds.
Serotonin (5-hydroxytryptamine) is an important neurotransmitter associated with the transmission of nerve impulses. It further serves as a precursor to melatonin, a neuro-hormone secreted by the pineal gland. Besides, melatonin is involved in several physiological processes beyond the circadian rhythm [19][20]. Indole-3-acetic acid is the most common and widely studied plant hormones of the auxin class (Figure 2) [21]. It is also the normal urinary tryptophan metabolite observed to be elevated in patients with various forms of liver disease [22].

1.3. Significance of Indole Based Drugs

Delavirdine is an indole based anti-retroviral drug approved by the Food and Drug Administration (FDA) in 1997 for the treatment of HIV patients (Figure 3). The drug acts as a non-nucleoside reverse transcriptase inhibitor and an inhibitor of the cytochrome P450 enzyme CYP3A4 [23]. Reserpine is a known indole alkaloid derived from the Rauwolfia serpentina plant. It has been utilized as an anti-psychotic and anti-hypertensive agent to treat high blood pressure [24]. Panobinostat is an oral histone deacetylase inhibitor developed by Novartis and approved to treat multiple myeloma. The drug is currently in phase II trials to treat acute myeloid leukemia [25] and phase I and II clinical trials for the treatment of AIDS [26]. Zafirlukast is the first orally active indole-like leukotriene-receptor antagonist approved by the FDA to treat asthma (Figure 3) [27]. It is mostly used in combination with an inhaled steroid and/or long-acting bronchodilator. Tadalafil is another indole based drug approved for the treatment of erectile dysfunction in men [28]. Pindolol is an antagonist of the serotonin 5-HT1A receptor and it is used to treat hypertension and as an anti-depression agent [29][30]. Indomethacin is a non-steroidal anti-inflammatory drug applied to the treatment of severe osteoarthritis, rheumatoid arthritis, gouty arthritis, and ankylosing spondylitis [31] (Figure 3).

Indole based alkaloids share great historical popularity as anti-cancer drugs. The most prominent among them have been vincristine, vinblastine, vinflunine, and vinorelbine derived from the plant Catharanthus roseus [32] (Figure 4). With over 150 alkaloids, C. roseus is the most well-studied medicinal plant. Vinorelbine is the most commonly used drug to treat lung cancer and vinblastine in combination with cisplatin is used in the treatment of NSCLC [33]. The anti-cancer activity of these derivatives was attributed to their ability to dissolve the mitotic spindles and cell division resulting from the microtubule disruption [33]. 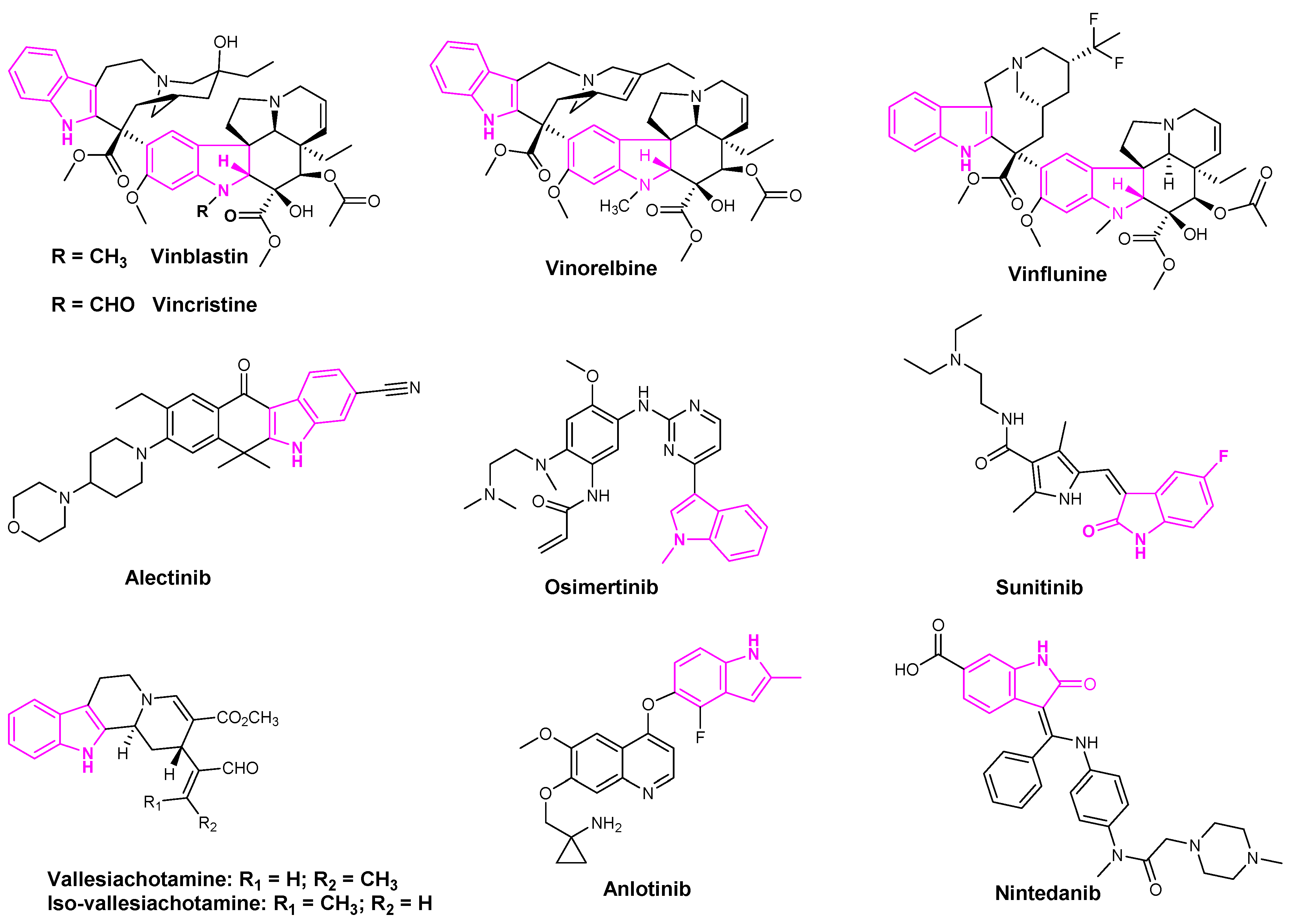 Figure 4. Indole containing anti-lung cancer drugs in clinical and pre-clinical stages.
Alectinib is a popular indole based oral drug developed by AstraZeneca. FDA approved the drug in 2015 for the treatment of crizotinib-resistant NSCLC [34]. Sunitinib is a multi-targeted receptor tyrosine kinase inhibitor that was approved in the first-line treatment of advanced renal cell carcinoma and gastrointestinal stromal tumors [35]. Osimertinib was also approved by the FDA in 2015 to treat metastatic EGFRT790M mutation-positive NSCLC patients [36]. Osimertinib and sunitinib are the indole based drugs, marketed for the treatment of NSCLC, advanced renal cell carcinoma, and gastrointestinal stromal tumors, respectively [36] (Figure 4). Mishra et al. recently isolated seven indole-based alkaloids and studied the anti-proliferative activities of their isolated compounds. They observed that aglycone indole based alkaloids, namely vallesiachotamine and iso-vallesiachotamine, exhibit anti-tumor activity with The half maximal inhibitory concentration (IC50) values of 4.24 μM and 3.79 μM, respectively, against H1299 human lung cancer cells (Figure 4) [37]. Anlotinib is a novel oral multi-target tyrosine kinase inhibitor, used for the third-line treatment of advanced lung cancer [38].
The potency of indoles as anti-cancer agents is exemplified by (i) various indole derivatives, such as indole-3-carbinol, indole-3-carboxaldehyde; (ii) functionalized indoles, such as diaryl-indoles, indolyl chalcones, indolyl azoles, and (iii) bisindole derivatives [39]. Several studies cast light on the anti-cancer efficacy of indole derivatives [40][41][42][43]. Besides, several reviews were submitted in recent years exploring the biological and pharmacological applications of indole derivatives as anticancer agents [39][44][45][46][47]. Though many comprehensive reviews were published, focusing on indole derivatives as anti-cancer agents, so far to our knowledge, there are no reports specifically focused on the efficacy of indole-based compounds in combatting lung cancer. Therefore, we are seeking to fill this gap by presenting a brief review focused on the development of indole-based derivatives as anti-lung cancer agents. In this paper, we included work between 2000 and 2019, of indole-based derivatives in the clinical and subclinical stages of development to combat lung cancer. As it is not possible to include the synthesis of all indole based anti-lung cancer agents, we are reporting herein the synthesis of some of the selected derivatives. We apologize in advance for possible neglect of any relevant work including synthesis on the subject. Basic mechanisms by which indole derivatives exhibit anti-lung cancer properties involve the induction of apoptosis, microtubule inhibition, protein kinase inhibition, histone deacetylase inhibition, and DNA topoisomerase inhibition (Figure 5). In the following sections, we will discuss several derivatives of indoles, developed and understudy for their prospective use against lung cancer, along with their mechanism and synthesis of some of the selected derivatives.

Overall, indole based compounds have emerged as a powerful probe for scientists in the ongoing battle against such life-threatening diseases, such as lung cancer. Significant advances in this area are evidenced in the number of indole-based compounds entering the pre-clinical and clinical stages. More advances are expected to meet the challenges associated with the accompanying chemotherapy. With a better understanding of the drug resistance mechanism in lung cancer patients, coupled with the multi-drug therapy advances offered by the indole-based derivatives, better and more promising strategies for combatting lung cancer can be expected in the near future.

More
© Text is available under the terms and conditions of the Creative Commons Attribution (CC BY) license (http://creativecommons.org/licenses/by/4.0/)
Upload a video for this entry
Information
Subjects: Biochemical Research Methods
Contributor MDPI registered users' name will be linked to their SciProfiles pages. To register with us, please refer to https://encyclopedia.pub/register :
Jyothi Dhuguru
View Times: 58
Revisions: 2 times (View History)
Update Time: 12 Nov 2021
Table of Contents
1000/1000
Hot Most Recent